Playing in Pubs and Dungeons

Have you read “Oh Canada” yet? No? You should start there.

After a long day of flying I land in St. John’s, New Foundland at 7:00pm. It was founded in 1497 and is considered by many to be the oldest city in North America with settlement beginning around 1630. Sebastian Cabot (wasn’t he in that old show Family Affair? Apparently he was an explorer before that) declares in a hand written text in Latin in his original 1544 map that St. John’s earned its name when he and his father, the Venetian explorer John Cabot became the first Europeans to sail into the harbor, in the morning of June 24, 1494. Historians disagree, saying it was in 1497 on the feast day of St. John the Baptist. They also disagree about the location of his landfalls (can’t we all just get along?). Anyway, it turns out I’m now closer to London than to Phoenix.

Finding my luggage was easy as St. John’s airport has two baggage carousels. I grabbed a taxi and was at my Bed & Breakfast by 7:45 (note – the time difference from Phoenix is 3 ½ hours. Yup, it’s so far east that it gets an extra ½ hour). I’ve reserved 4 nights at the Gower House B&B. Why a B&B? Well, when I looked into hotels there seemed to be a lot of bed and breakfasts in the downtown area. As I don’t plan on having a car here (then again, I don’t plan much) it seemed a good, centralized location. Also, I’ve been lucky enough to stay in some of the best hotels in the world (none of the best hotels in the world are in St. John’s) and I like the different personalities of B&B’s. You also tend to meet people in a B&B, which works out well if you’re traveling alone. And, with a small budget, the Gower House was on the lower end as far as price goes (although, since you’ve sent me here in low-season, everybody’s prices are pretty good. Thanks!). And why did I reserve four nights when I’m staying seven? Well, you never know what might happen. Maybe some great opportunity will arise and I’d prefer not to be locked in to this place. With it being low season, there shouldn’t be a problem adding nights. Although, being low season, cancellation policies are, well, non-existent. I  booked more than my planned two nights as their cancelation policy this time of year is, “if possible, just let us know.”

Joseph shows me to my room with a private bath and a queen sized bed with a cozy quilt (it feels like I’m staying at grandma’s house). I unpack a few things and ask Joseph where a girl might find a drink. 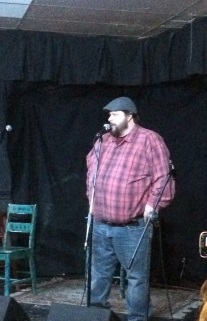 He gives me a recommendation or two and I end up at The Ship Pub having beers, talking with locals and listening to folk music and story tellers. The Ship Pub is no different than most bars in St. John’s, and there are a lot of them as, allegedly, St. John’s has more bars per capita than anywhere else in North America, And most have music nightly. It’s folk-a-palooza night at The Ship Pub, but the most impressive act is a local storyteller. His poem about answering the sex question asked by his eight year old daughter is priceless. I meet many other storytellers this night, but they are simply bar patrons trying to mess with the American girl.

I return to the B&B to get a good night’s sleep. Unfortunately nobody mentioned this to the snow-plow driver working directly outside my window for 1:00-2:30am. I head down for breakfast and, unfortunately, the two other people staying at the B&B choose to skip breakfast this morning. I ask Renee, who serves breakfast what her favorite thing to do in St. John’s in the winter is. Much like the taxi driver and the bar patrons, she doesn’t have much of an answer. So far the answer has been, “Sit in my basement and play music, hibernate, drink, and walk my dog.” I’m a believer that there’s always something fun to do and someone interesting to meet if you try hard enough so I head out to explore.

While walking, I pass two people talking outside of an interesting looking building. I passed this place last night and saw the same thing (different people). I turn around and decide to pop in and see what this place is. I must tell you that the last time I did this was in Krakow, Poland and I ended up in an old castle in a small audience of people drinking wine and listening to the last half of a concert performed by the Krakow Stringed Quartet. Word to the wise – always turn around and explore. It turns out this is the old Masonic Lodge where the secret Freemasons group met regularly and did whatever they do which, apparently is a big secret. The building was built 116 years ago and during this time, the general public wasn’t allowed in most parts of the building. Well, luck was with me. The two people having a conversation out front were Kathy, one of the owners and Lillian who, with her husband, hosts a podcast called, Republic of Avalon Radio. Lillian had set up an appointment to interview Kathy and tour the building and I was invited along.  Kathy and her partner purchased this building just a few years ago to establish the theatre company Spirit of Newfoundland. The building is now used as a theatre and event venue. Kathy and her partner are refurbishing the place in order to use the entire inside space and bring all of the rooms up to current safety code. This will take some money and fund raisers are planned. 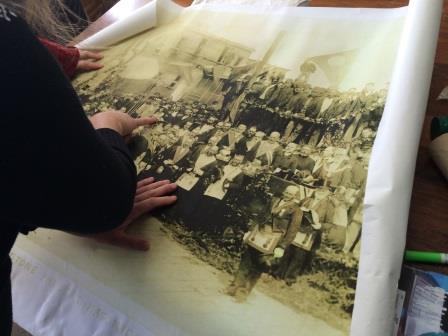 In the meantime, we get the inside scoop on this historic building. Kathy first brings us down

to her office where she shows us the photo taken from the laying of the cornerstone in the late 1800’s. We then tour the many rooms including the chapter room (think secret ceremonies), the piano room (not the original name but it’s where  they’re currently storing the many ornate pianos which have been donated), the room which holds the pipe organ which Kathy is nice enough to play for us, and the dungeon. Yes, the dungeon. It’s accessed through lifting a square of planks in the floor and climbing down a ladder. Apparently “pledges” would be put

in there with the only light being from a candle which lit up a skull. Kathy is nice enough to allow Lillian and myself to climb into the dungeon and close the lid. I’m not sure what you do on your vacation but mine includes being shut in dungeons.

Our tour ends in the Screech Room which is a traditional “Newfie” ceremony which I’ll describe in a later article. Suffice to say it involves fish and rum. As we finish up Lillian interviews me for her podcast and John, the Operations Manager tells me of a charitable event they’re participating in the following night at a winter carnival. They’lll provide the entertainment, food and food service. Before I know it, Janet, one of the performers and also the reservations manager, volunteers to meet me at the lodge and drive me there. I’ve found my volunteer opportunity.

Continued in “Stepping Up To Signal Hill”