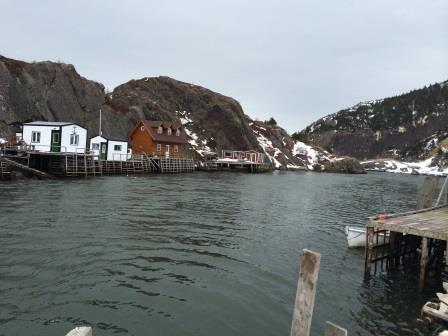 The plan for today is to head on over to Quidi Vidi, a tiny fishing village in St. John’s. Quidi Vidi Village (pronounced Kiddy Viddy) was used after World War II for the construction of a United States’ Air Force Base. Nowadays the village is a quiet community, where you can walk from one end to the other in five minutes flat. Although the wind is once again blowing enough to make me realize we’re not in Kansas anymore, I’m told it’s only a 15 minute walk. And, with the wind at my back, I should make it there in no time! I stop for a coffe and a scone at a cute little coffee ship on the way. From there I’m given directions and told it’s 15-20 minutes away (hmmm, I’ve already walked ten minutes). I head on out and, between beingn blown by the wind and sliding on the ice, I barely have to move my legs to make progress. After walking 15 minutes I realize I’m lost. I stop a guy on the street and ask for directions. He tells me to go back up the street I just came down, turn right and it’s about 15-20 minutes away. Are you kidding me? I, once again, head out in the direction I’m told and, sure enough about twenty minutes later I see the promised land, the Quidi Vidi Brewery.

I’ve already had the opportunity to sample the Quidi Vidi beer and am told to head on over to the brewery for an interesting tour and beer tastings, all for the low-low price of $15. I step into the tiny gift shop and ask about brewery tours. I’m told they,, unfortunately, don’t do them in the winter. Yes, one of the hazards of traveling off season but, as I didn’t have my heart set on this (I’ve been to lots of breweries, I was really in it for the beer), I move on. I walk on over to the Quidi Vidi Plantation which doubles as a welcome center and an artisans craft market. Downstairs there’s a young girl playing guitar and singing. As this is a small village,

I’m sure she’s a local and possibly only working for tips. One shouldn’t expect Jewel. I walk upstairs to the artists’ area. The options range from print makers, painters and textile makers to pottery makers, soap makers and weavers. After wandering around I decide to check out the Mallard Cottage, a restaurant housed in a building recognized as a National Historic Site of Canada, as being one of the oldest wooden buildings in North America. I’m told it’s a cozy place with a fireplace and great food. Unfortunately, when I arrive I’m also told that they are full for brunch both today and tomorrow and not available for dinner until tomorrow night.

I then head across the street to the Inn of Olde. A few people have told me about this place and Linda, its owner. Apparently this place is incredibly quirky and Linda is even more so. Supposedly, this is like walking into someone’s basement and, if you’re looking for the restroom, be sure to turn in the right direction or you’ll end up in the kitchen. If you’re looking for the diveiest of dive bars, this is supposedly the place. Unfortunately, that also means that there are really no set hours. I arrive at 1:00 on a Saturday afternoon and the door is locked (although the sign says open). As these seem to be the only two restaurants/pubs in Quidi Vidi, I walk back to the Plantation (ever so slightly irritated) and ask if they can call me a taxi (I walked here with the wind and, although it’s calmed down a bit, I’m hungry!). While ‘m waiting, I notice a brochure for the Inn of Olde. They dial the number for me and, after a couple of rings, a woman answers.

“Oh, I went there and the door was locked.”

My cab arrives, I hop in and ask to be dropped in downtown St. Johns. On the way, the driver tells me about the St. John’s Regatta, North America’s oldest sporting event. It’s held on Quidi Vidi Lake in August and, according to Mr. Taxi Driver, you wake up at 6:30am and, if the weather is good, the regatta is on and the city shuts down. If the weather is bad, everyone goes to work. It’s a bit like the Inn of Olde.

I finally end up eating lunch at what has now become my regular place, the Yellowbelly Brewery and Public House. I order the Poutine (pronounced poo-teen), which is a traditional eastern Canadian dish originally from Quebec but now served all over eastern Canada. It’s made French-fries topped with light brown gravy and cheese curd. While they skip the cheese curd and make it with cheese at Yellow Belly’s, I have no doubt that my heart attack risk remains the same. Supposedly they serve Poutine at McDonalds out here which I cannot even contemplate. After a glass of Yellowbelly’s Wexford Wheat, it’s nap time before dinner and a show tonight. 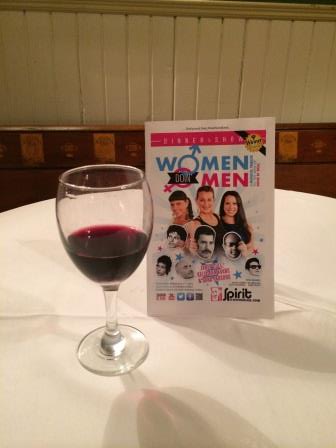 At 6:30 I head over to the Masonic Lodge to see the Spirit of Newfoundland Productions perform their show, “Women Doin’ Men.” After my evening of service the night before, Kathy, the owner has invited me to attend tonight’s show on the house. As I wasn’t able to see much of the show the previous night, I take her up on her offer. I sit at a table of fun people from St. John’s and Paradise, the next city over. The woman next to me is a riot and becomes even funnier the more she drinks (or maybe it’s the more I drink). The show is fabulous with the three female singers doing comedy and performing songs traditionally sung by men. While I plan to head over to the famous George Street after the show, it ends at 11:15 and the wine has gone to my head. George Street will have to wait.

Through Rain, Sleet and the Frosty Festival Museums, Speakeasies and Screech-Ins, Oh My!