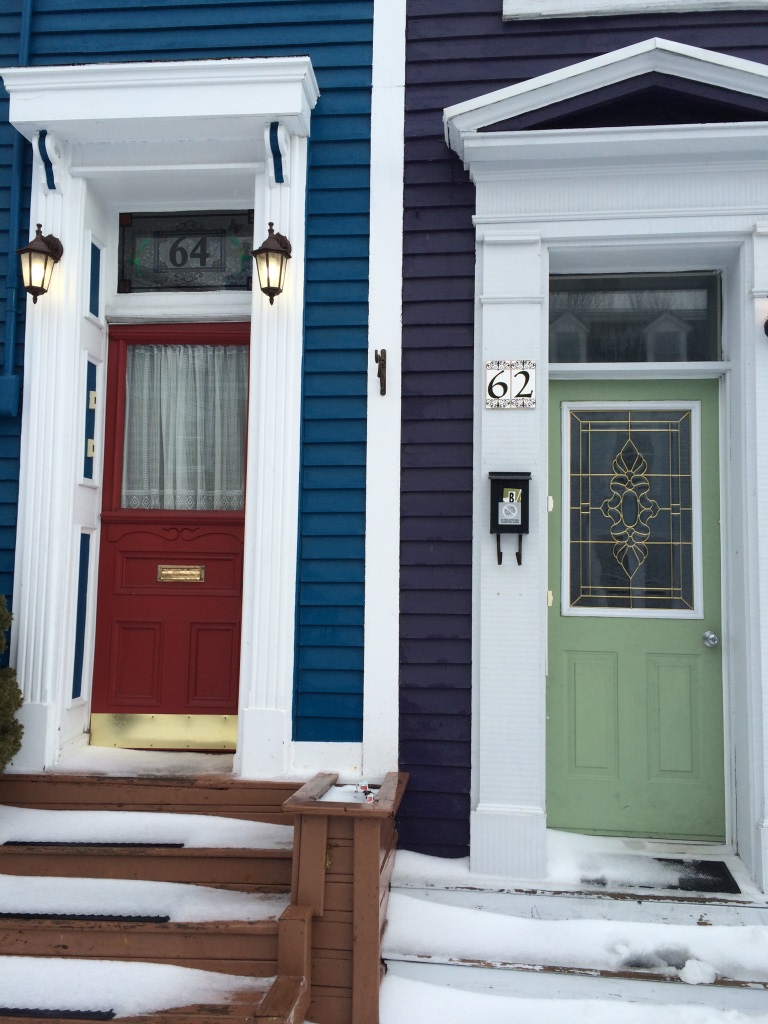 Have you read Finding Religion and Virgins? It’s what happened the day before.

On my final day here I head down the hill to spend some quality time exploring the shops of St. John’s. There are some truly quirky places here. Knickknacks, clothing, outdoor outfitters (aah, snow boots that haven’t disintegrated), coffee shops (many) and shoe stores. In fact, St. John’s seems to have an abundance of really cute ladies shoes. Strange for a place where, at least at this time of year, all you need is a pair of warm, waterproof boots. I can attest to this as I normally bring a minimum of six pairs of shoes on a trip (yes, I know, I’ve tried to cut down on this but I’ve given up). This time I only brought five pairs of shoes (there’s hope). These include my hiking boots, the infamous snow boots, cute higher-heeled black boots, cute flats and sneakers (in case I run into a gym or feel like a run). Out of these, I wear three; the flats (only on the travel days, the snow boots which disintegrated after walking three blocks and the hiking boots. I tried putting on the cute boots one night and walked half a block when I realize walking down the steep hill on ice in heels might allow me to tour the inside of a St. John’s Hospital. I turned back and put on the hiking boots.

After spending some time wandering the shops on Water Street, I decide to head up to Duckworth Street for lunch at India Gate. I’ve been told about this restaurant by many locals who have mentioned their great lunch buffet. When I arrive I’m told they’re not offering the buffet today, but will bring almost all of the items to my table instead. Make me get up for food or bring it to my table, I’m not picky. The food begins arriving – a fantastic lentil soup with a really nice hint of lemon, an appetizer of vegetarian samosas with two dipping sauces, and a main course plate with a variety of foods including Butter Chicken, amazing. I also order a Mango Lassi, an Indian smoothie made with yogurt which I highly recommend.

After lunch I head down the street to the Newfoundland Chocolate Company. I need to buy a few thank you gifts and I’ve been told this is the place. As I enter it truly smells like I’ve died and gone to chocolate heaven (is there any other kind of heaven?). The clerk there offers me a sample (I control myself by taking only one piece) and I purchase a couple of boxes of assorted chocolates, including some Screech filled ones (what’s Screech? Read Museums, Speakeasies and Screech-Ins, Oh My!). 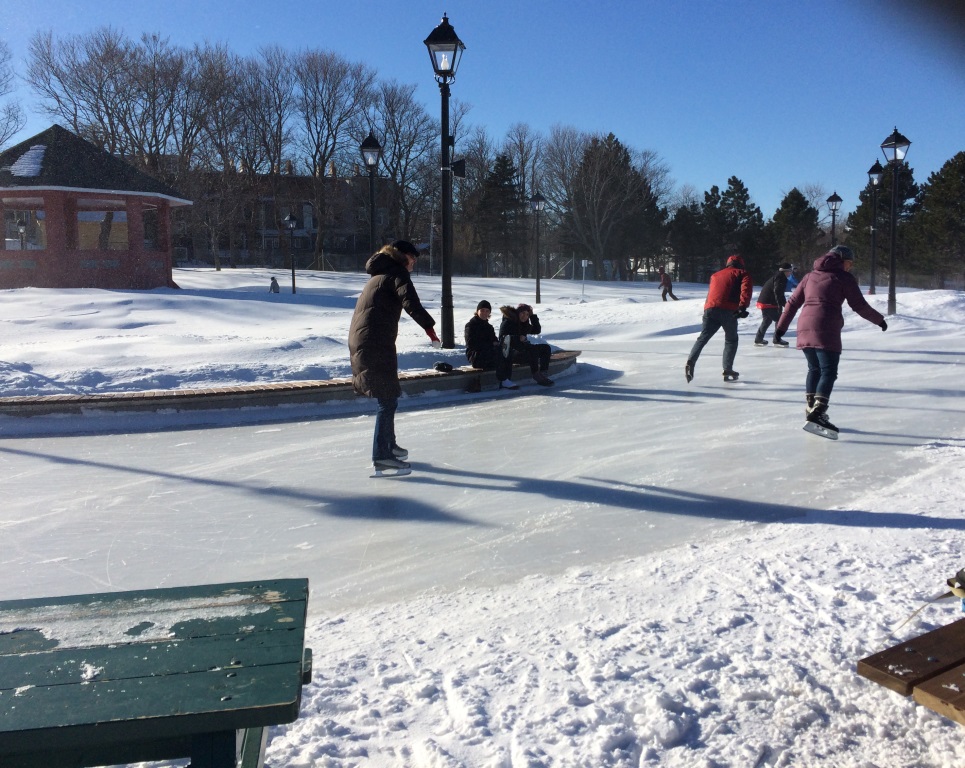 I climb further up the hill and walk to Bannerman Park to check-out The Loop, an outdoor, figure-eight shaped ice skating area new to St. John’s this year. On this day the wind is biting and it seems incredibly cold. Still, there are hardy Newfoundlanders out here gliding along. Apparently this is what “a stroll in the park” is to Newfoundlanders. As this is a new venue here in St John’s, they do not yet have skate rental which gives me a pass on showing my Olympic quality skating skills.

I end the evening as I’ve done so many other nights, having a beer and a bite at Yellowbelly’s. I say a goodbye to the wonderful staff there and thank Jo for all of her great suggestions and representing St. John’s so well (give that girl a raise).

I wake up early in order to get to the airport two hours prior to my “international” flight. Today’s itinerary takes me to Newark, San Francisco and, finally, home to Phoenix. I board my small commuter plane for a three-hour flight to Newark trying to figure out when they began using commuter planes for three-hour flights. I have the row to myself as there’s only one seat in the row. By the time we arrive in Newark I’m pretty sure my feet have frostbite (note, wear thermal socks on commuter flights). I head through immigration and customs. A note here – I recently renewed my passport and therefore, it has no stamps in it. Like any good traveler, I need to get it dirty. I thought I would on this trip but that questionable “international” trip to Canada became even more questionable when Canadian immigration chose not to stamp my passport. It is only stamped on my return to the U.S. so, the first stamp in my new passport is my home country.

Once through the official stuff I head over to my gate, board my plane and hear the pilot announcing, “We’ll be a few minutes delayed here as our mechanics work on an issue with a light that doesn’t seem to be working properly.” After another five minutes or so, the pilot makes another announcement, “Sorry folks but I was hopeful saying a few minutes. This is going to take longer so, if you want to get off and stretch your legs, feel free.” As this will be a six-hour flight once we finally get off the ground, I choose to get off and grab a coffee. I’m told they won’t make an announcement when we’re ready so, you know, don’t go far.

I grab a coffee and re-board the plane. A few minutes after taking my seat, the pilot announces that, although they couldn’t fix the light, it’s “insignificant” so we’ll be taking off in a few minutes. And we might make up some time as, “we have plenty of gas.” Hhmmm, does that mean the fireball will be really big when we crash due to the “insignificant” light?  Before we finally take-off, one more announcement is made, “If there’s someone seated next to you who is not there, please let us know. We don’t want to leave anybody” Oh good, we’re using the buddy system.

As we get closer to San Francisco the pilot announces that the winds were stronger than anticipated and we will definitely be arriving late. Our new ETA is 7:42. Uh, what? We were originally scheduled to arrive at 5:04. People (including myself) begin frantically searching their travel documents looking for information on their connecting flights. A few minutes later we hear from our pilot once again, “Folks, sorry, a correction in that arrival time. We’ll be arriving at 5:42. I begin wondering if this pilot grabbed a glass of wine while they were working on the “insignificant” light.

Thanks for flying Air Drop Me Anywhere. Tomorrow, I’ll give you the good, the bad and the ugly. What’s different if you come in the summer, some helpful links for planning your trip and a breakdown of the cost of this trip to help you budget your trip.

Finding Religion and Virgins The Good, The Bad and the Thank-You’s – St. John’s Newfoundland