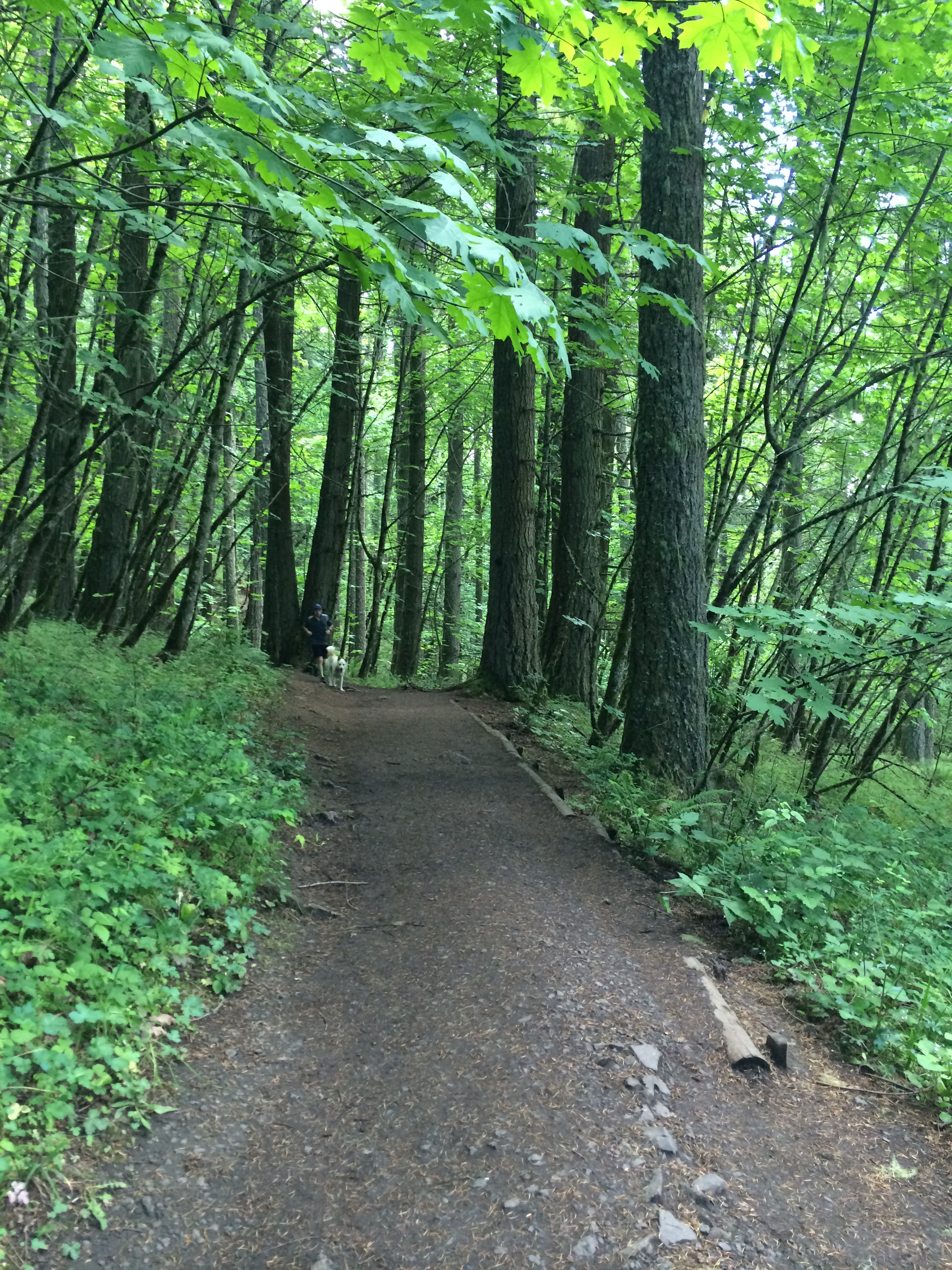 Have you read “A Yurt By Any Other Name?” You might want to do that first.

After a really terrible night’s sleep, I wake up vowing not to let it affect my mood this first full day in Oregon. I couldn’t get comfortable last night, but think it was more my own back issues than the Roundhouse bed. To quote Indiana Jones, “It’s not the years honey, it’s the mileage.”

I trek on over to the shower and drive over to a coffee kiosk a mile down the road that I noticed last night. I order a latte and a bagel and my mood vastly improves. I’m ready! But ready for what? So far, when I ask locals what their favorite thing to do here is, besides mushroom hunting, the consensus seems to be, hike Spencer Butte. So, now that I’m caffeinated, I throw on my yoga pants (I didn’t bring shorts as the temperature was supposed to be in the low 70’s and to this current Phoenician, that’s sweater weather) and lace up my hiking boots and I’m ready.

Water bottle in hand, I drive on over to Spencer Butte park, about 10 minutes away and begin the hike. There are a few choices of trails. I decide on the “Main Trail” as it’s about a 700 foot elevation gain in about a mile, as opposed to a 700 foot gain in about 1/2 mile. Slow and steady, thank you

I’ve been told by Nate at the Roundhouse that it’s an hour up so it should take a few hours. The online guide says it’s a 2 to 6 hour hike. As is true with most hiking guides they overestimated the time. It takes me about 45 minutes to reach the summit. The last part is true scrambling. I’m sure there’s a trail somewhere but I’ll be darned if I can find it. I’ve met a couple of women on the trail and they can’t seem to find it either. As we can see the summit, we decide it’s every woman for herself and make our own path. While the views along the way have been impressive, the views from the top are outstanding. 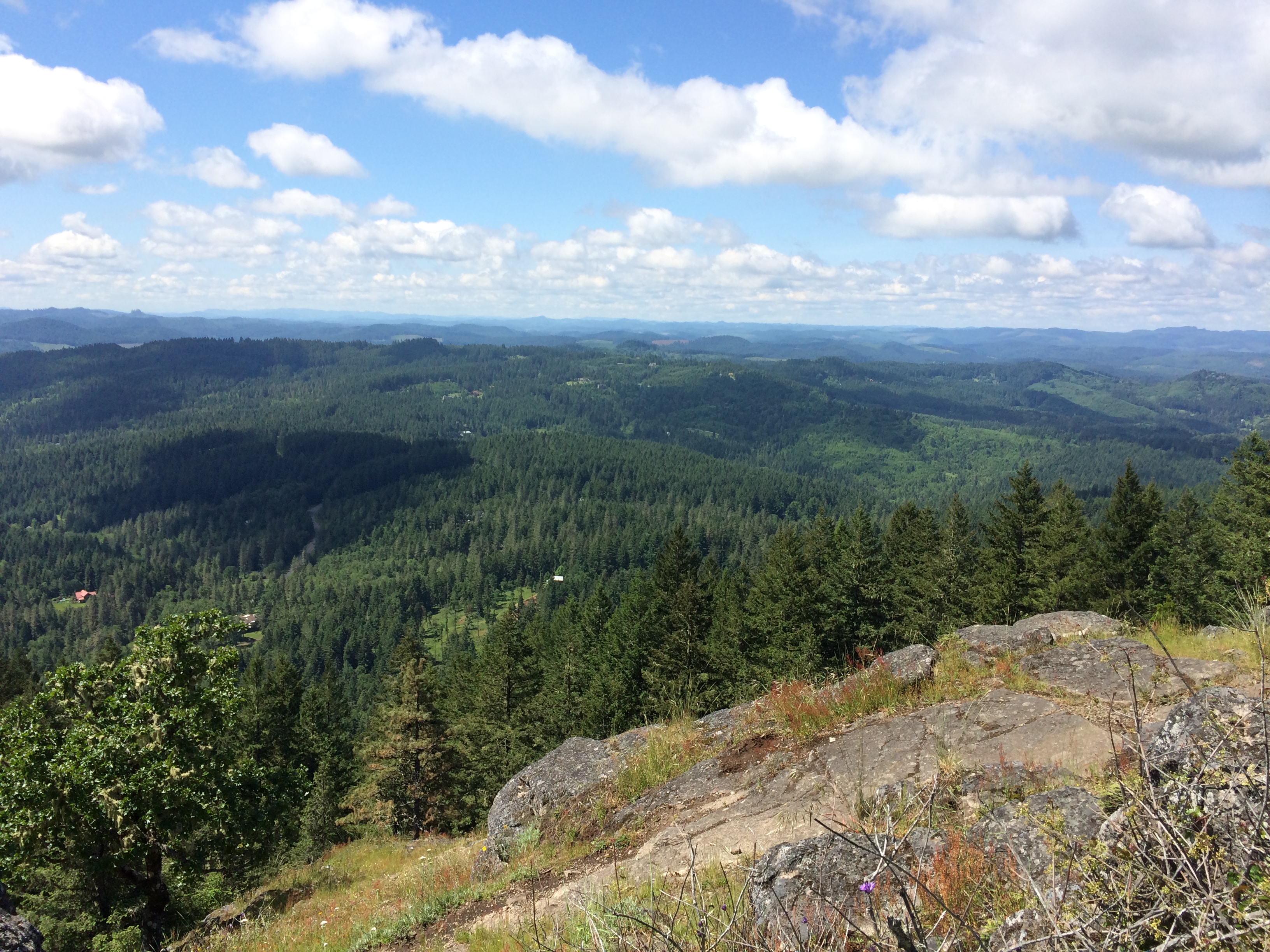 As I reach the top, not only do I see views of green rolling hills with tall pines and farmhouses to rival Switzerland, I also meet four twenty-somethings and their two dogs (no idea how old the dogs are). By “meet” I mean I catch my breath for a minute and say hello. They nod.

I decide I’ll win them over with my sparkling personality and ask, “Oh, are these the famous Guard Dogs of the Mountaintop?”

As I like dogs and they generally like me, I hold out my fist to them to let them smell me (because apparently, to smell me is to love me). One seems nice enough but the other starts growling and showing his teeth.

I back off and say, “Um, are they friendly?”

The only response I get from the twenty-somethings is a sideways look and a smirk. For a minute I wonder if they speak English, but a few minutes later I hear them having a perfectly good conversation in my native tongue. I’m later told by one of the women I’ve met on the hike that this is typical of Eugene twenty-somethings. They tend not to speak unless it’s required of them. Apparently the possibility of me being attacked by Cujo didn’t rate high enough.

I sit and stare in awe at the most amazing view while chatting with Sonnet and Liz, college friends who have gotten together for a mini-reunion. Sonnet lives in Eugene and will be taking the Bar Exam this summer. Liz is a vet (the animal kind not the army kind) and the squirrels seem to know it as they’ve followed her to the top of the mountain. After about 30 minutes she announces that they must get going as she has to get a run in as she’s training for a marathon (I hate her). 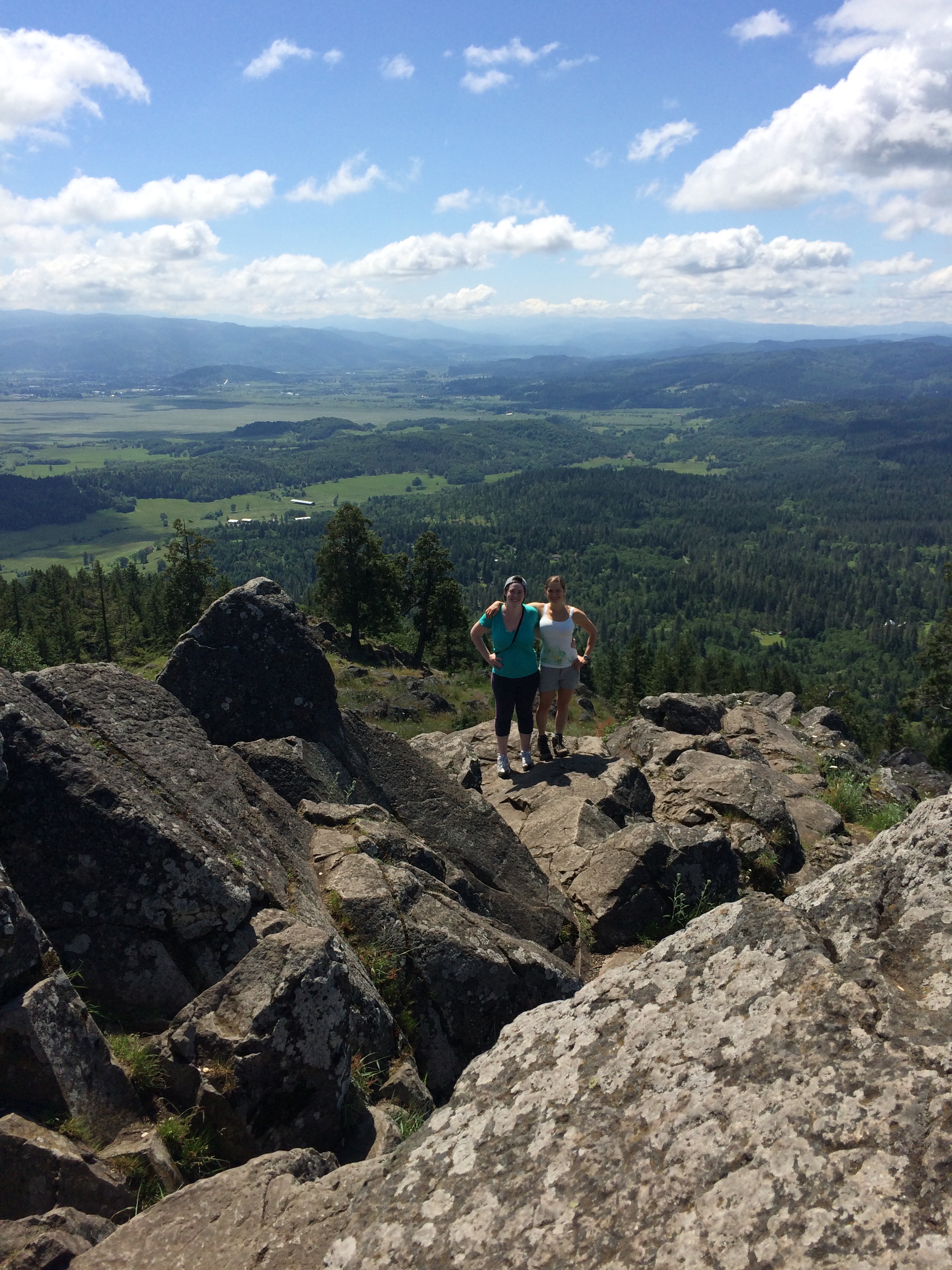 After a few minutes more of enjoying the views, I make my way down, hop into my car and head downtown to hit up one of the famous Portland food trucks (I’ll carb-load for the marathon). I find a truck called Slurp which serves,

what I’m told is the best Kahlua pork from a recipe handed down by the owner’s grandmother. I forego the rice, cutting the carbs (okay, no marathon for me) and get it only with the pineapple and cabbage. I take it over to Townshend Teahouse which has introduced me to Bubble Tea (fun to say and even more fun to drink) and Kombucha which is a fermented tea that’s supposed to be really good for you and is also quite tasty.

After eating my pork and drinking my Kombucha, I hop in my car and head over to The Hideaway Bakery to meet an old coworker for their Tuesday Pizza and Live Music evening from 5:00-8:00pm. They have beer, they have wine, they have pizza, they have music and they even have a sandbox. What more could you want? We get to catch up over another great Oregon brew while her three year-old plays in the sandbox and I get to hold her six month-old which I miss terribly since leaving my last job working with kids. Everybody’s happy.

A Yurt By Any Other Name The Joys of Indoor Plumbing