The Pied Piper of Portland

Have you read “Beer and Bikes?” You might want to read that first.

I wake early, ready for a big day. I’m heading into downtown Portland to explore some of the more famous locations on my own and with some help from a guide. First stop, Powell’s City of Books. Yup, that’s right, I said “City of Books!” This is nirvana for readers. They take pride in carrying both new and used books, and displaying them on shelves together. Do you really care if a book was previously read? Will that make the story any less interesting? Here are some of the City’s numbers:

–    Approximately 3,000 people visit and buy something each day, and another 3,000 just come in and browse and drink coffee (yes, there’s a coffee shop; no, it’s not Starbucks).

–    They stock more than 122 major subject areas with 3,500 subsections – subject areas are in various rooms which are designated by color. The Red Room is my favorite as it includes travel writing. I spend some time in there dreaming about next year when, hopefully, “Drop Me Anywhere – a Travel Memoir With a Twist” will be housed there.

–    There are more than a million volumes lining the shelves. 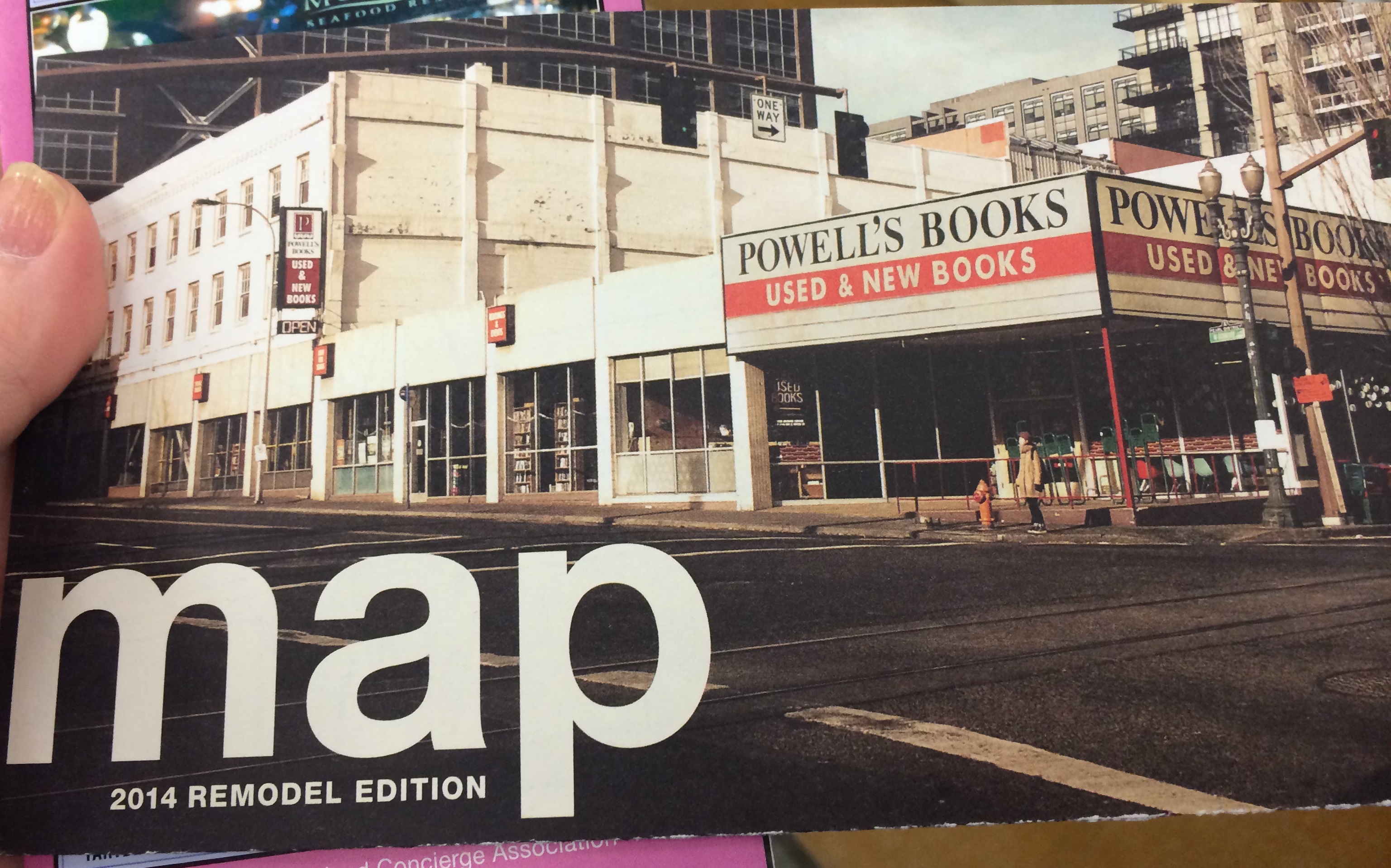 Any bookstore requiring a map to find your way around means you could spend an entire day there. I have an hour-and-a-half. I head straight to the Red Room and see books on the upper shelves which I want to look at. Being only 5 foot, 3 inches tall, anything shelved above 6 feet is out of my reach (I start wondering if this is what they mean by “higher education”). I ask for assistance and am brought a stool from the next aisle. I begin noticing small, step-ladders around the place. How cool! You can actually climb up to retrieve your books on your own without having to ask someone to take down each book you might wish to browse. This small thing is, for me, a big deal.

After my ninety minutes of browsing, I head out towards Pioneer Courthouse Square. I’m taking a walking tour which a friend has recommended and it meets across the street from this historic square in front of the Pioneer Courthouse at 11:00am. The tour is called “Secrets of Portlandia” and is unique in itself as, they take no reservations – you just show up – and there is no charge.

The guide and owner, Eric, works for tips. It’s easy to find him as he’s wearing a “Secrets of Portlandia” T-shirt and a head microphone and is surrounded by about ten people (he’s either a tour guide or a street preacher or, perhaps, a little of both). By the time we begin, Eric has 27 people following him down the street (we kind of look like that group walking for their Mother in Pilgrimage to Portlandia) and, in my head, I’ve nicknamed him “The Pied Piper of Portland.”

We begin by walking across the street and into Pioneer Square. This is known as “Portland’s living room” where all are welcome, although there’s no Barcalounger (actually, as you never know what you’ll find here on any given day, you may show up one day to find, not only a Barcalounger, but perhaps a guy sitting in it and watching TV and smoking a cigar). Eric explains that Pioneer was meant to be a gathering place for the people of Portland and the goal

was to keep it free to all who wished to come. The way they did this is to sell bricks which could be engraved with names. There are currently 72,430 named bricks placed permanently in the ground, and bricks are still for sale. In the summer you can come to Pioneer Square and enjoy Flicks on the Bricks, join in song with Sing Portland, enjoy the floral mosaics created at the Festival of Flowers or read to your heart’s delight at the Northwest Summer Book Festival. If you’re around during Halloween you can get your Zombie on at the Giant Zombie Dance Party where you’ll dance with other non-dead to Michael Jackson’s Thriller. You can also “Run Like Hell” in the charity costume 5K, 10K and 1/2 marathon of the same name.

Throughout the tour Eric does a great job of explaining the history of Portland while keeping it fun. This is not just an historical tour, but a bit of a comedy show. Let’s call it Histortainment! The jokes, both good and bad keep coming while Eric informs us of strange Portland laws. These laws include:

–    People may not whistle underwater.

–    You cannot wear roller skates/blades in the restroom.

–    Riders of sleds may not attach themselves to passing cars (takes away all the fun).

–    It’s against the law for a wedding ceremony to be performed at a skating rink (seriously, what?)

–    Oregon law – you cannot pump your own gas. A gas station worker must do this (seriously, when I tried the attendant came out and said, “Caught ya”). 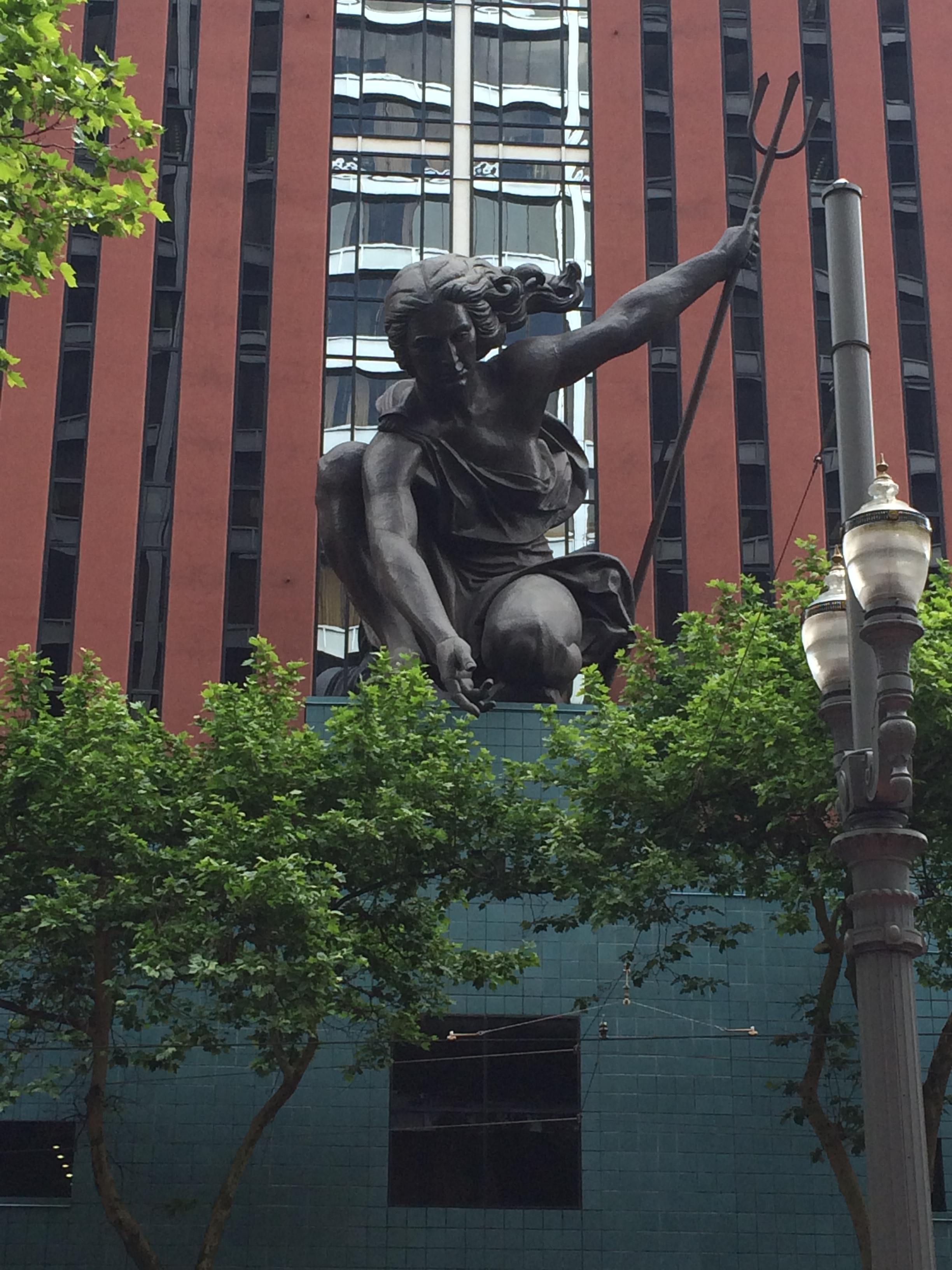 We stop buy the impressive copper statue named Portlandia which was installed in 1985 and stands (well, actually squats) 34 feet, 10 inches high. We visit Mill Ends Park, which at two feet wide (452 sq. inches), holds the title of the smallest park in the world. The park, dedicated on St. Patrick’s Day in 1948, is the only leprechaun colony west of Ireland, according to its creator, Dick Fagan. Fagan also named Patrick O’Toole as head leprechaun and guard of the park. I suddenly have a craving for some Lucky Charms cereal.

The tour lasts just over two hours and ends in front of the famous Voodoo Doughnut where the catchphrase is “The magic is in the hole.” Eric tells us the history of the famous doughnut stand and about the early years when the doughnuts were supposedly made with questionable ingredients including Pepto Bismol filled and some other over the counter pharmaceuticals. Nowadays, they just serve doughnuts consisting of actual food ingredients, but that doesn’t narrow down your choices one bit. They have the classic Voodoo Doughnut, which is a raspberry jelly filled doughnut topped with chocolate frosting with a pretzel stake in it (order it, think of an ex-boyfriend/girlfriend perhaps, and go to town with that pretzel. You’ll enjoy watching the raspberry jelly leak out). 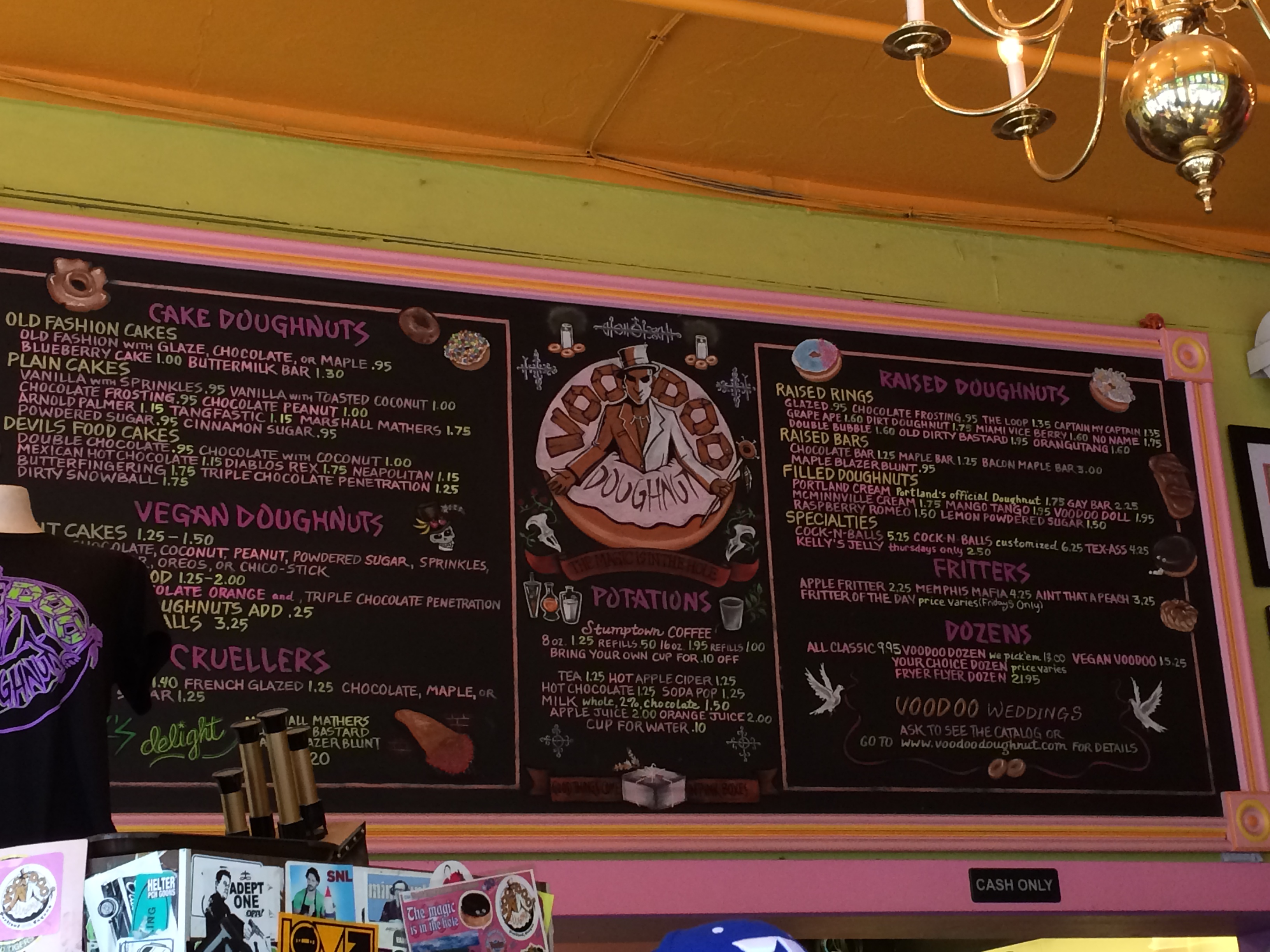 The tour ends and Eric steps over to the corner to answer any individual questions. This would be the time to put some money in his hat, which you should. Remember, there was no charge for this tour so you can judge the value. I would put the Secrets of Portlandia tour up against any prepaid tours offered in Portland. Eric has the knack of making me love this town. He is obviously proud of his city and embraces the weirdness without feeling the need to put-down other places. You should take this tour.

As I’m across the street, it would seem a shame not to pick-up a doughnut as I have a responsibility to you, the reader, to let you know if they live up to the hype. Yes, of course, that’s exactly why I went in to order. The line is short today and, after only a five-minute wait, I step up to the counter completely overwhelmed by the options. I see something on the menu that catches my attention.

“What’s the ‘Cock-N-Balls’?” I ask. The lady at the counter shows me the one in the display case.

“Well, do you really want a small one?” she responds.

“Good point! I hear a lot of people ordering an ‘Old Dirty Bastard’. What’s that?” 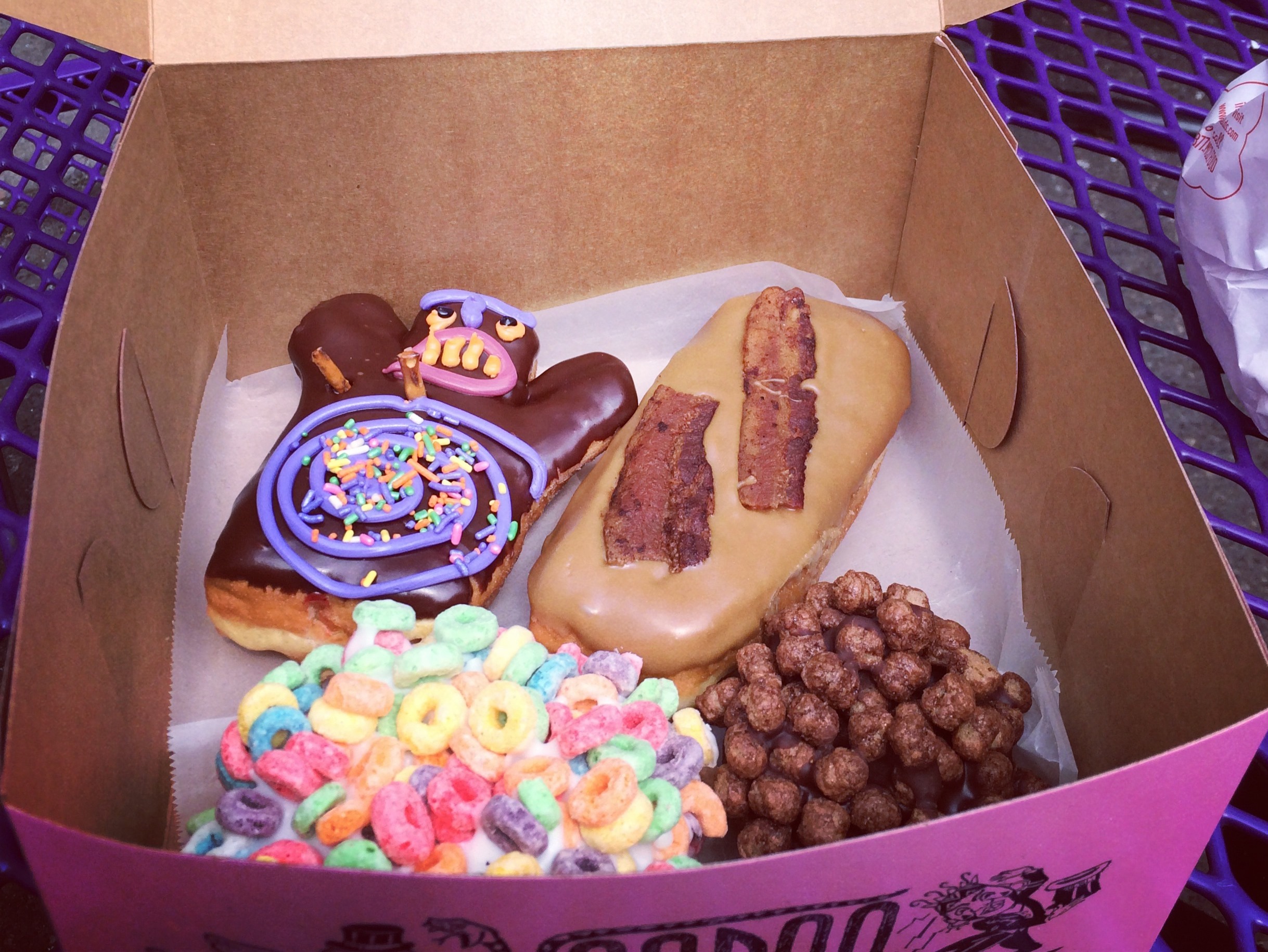 I also stop at one of the famous Portland food carts and buy some sort of chicken and potato dish from a Thai food vendor. I take it and sit down in the park across the street. When I open it, there’s enough food to feed three or four people, as well as a small cup with something pickled (I suspect it’s pickled chicken feet). I enjoy lunch while listening to a homeless guy playing ukulele and a kazoo. Again, oh so very Portland.

Tomorrow – wandering around St. Johns and The Good, the Bad and the Thank You’s.

Beer and Bikes in Portland The Good, The Bad and The Thank-You’s – Oregon