Guinness is Good for You

Have you read “On a Wing and a Prayer?” That’s the beginning of this experience.

At about 1:30am the cabin crew arrives at the gate and everybody in the area breaks into applause and cheers. We finally board and, four-and-a-half hours later than scheduled we take off. I popped my Melatonin two hours earlier as I thought I’d be snoozing by now, I’m ready to get on that plane and sleep the entire way. I sleep for about an hour before waking to the coldest plane ever and, even asking the flight attendant to please make it warmer, I continue to have icicles dripping from my nose. I surrender. There will be no more sleep. 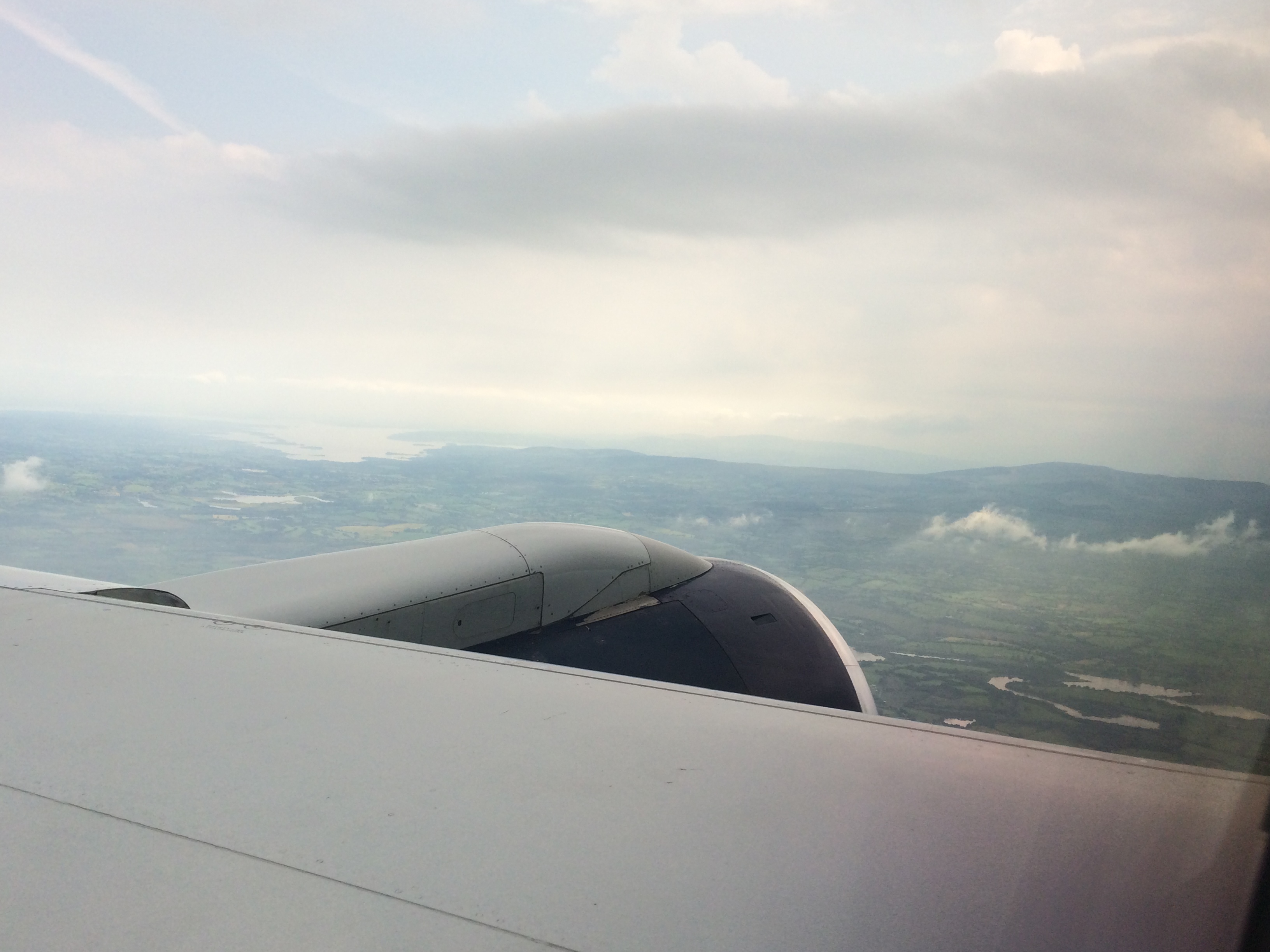 At 12:50pm, we finally touch down. I don’t know if I’m more excited to be in Ireland or to finally be off airplanes and out of airports. I stop and say hello to the nice man at immigration before proceeding to pick up my luggage where I run into Siobahn, Aibha and Aisling and confirm what Siobahn has previously told me about a rumored bus from the airport to Limerick. Siobahn pipes up, “We have family coming to pick us up in two or three cars. If we have room we can drop you.” What a great Irish welcome!

We pass through customs which consists of a lady standing on the side of a hallway pointing to a door which leads out to the meet and greet area. Waiting there are Siobahn’s husband Greg, an American who flew in earlier as he’s traveling in Europe on business, two of her sister’s and her father Peadar, who is, so far, the funniest person I’ve met in my five minutes in Ireland. Siobahn introduces me to her clan and explains who I am, what I’m doing here, and that they’re giving me a lift into Limerick if there’s room. They work out the logistics and, before you know it, I’m sitting in the front seat next to Peadar who’s showing me the sign he carries in his car which says, “Céad Mile Fáilte” and means “100,000 welcomes” and we head into Limerick. 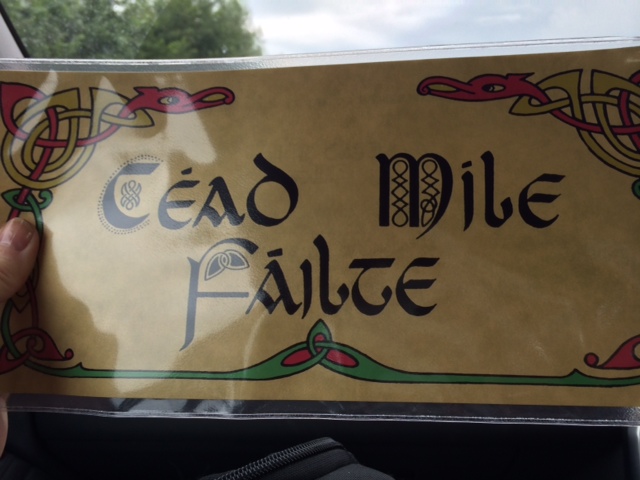 On the way, Peadar points out various places of interest explaining them all – there’s a castle without much historical significance, there are some Travelers’ campers where people live and have very large weddings, and there’s the Treaty Stone which was the stone on which the Treaty of Limerick was signed on October 3, 1691 after the war between William III of Hanover and his father-in-law, King James II (wow, talk about not getting along with the in-laws). Peadar suddenly stops the car and says, “Get out!” I think, “Oh know, what have I said?” Peadar excitedly insists that we take a photo at the stone (I love this guy!). We hurry as he’s parked in the bus lane and proceed to my hotel. We’re almost there when Peadar says, “Oh wait! I must show you something else!” and we turn into an alley. His daughter has been working on a street art project while volunteering with Limerick Youth Service and much of the artwork is in this alley. It’s very well done. We circle around and, while we once again head to the hotel, Peadar jokingly stops and says the he could just “drop me anywhere.” Seriously, I want him to be my Irish dad.

We pull up to the Limerick City Hotel which is in the center of town, not before Peadar has pointed out various castles and churches which I must see, and I say my thank-you’s and goodbyes.

I check into the hotel which, by the way, cost me only $83.22 for three nights. How did I get such a good deal? I Googled “airline coupons” which led me to the website Retail Me Not where I found a coupon for $150 off a combo package of round-trip air and four nights hotel (flying anywhere and staying anywhere) through Cheap Tickets. This is the only reservation I made ahead of time as it’s nice to have at least your first night hotel booked and it allowed me to take advantage of the deal. I then decided to stay in Limerick for only three days (this is why I try not to plan too much as, it’s a woman’s prerogative to change her mind) and the hotel and Cheap Tickets worked with me and refunded me $50.

I feel only slightly better after a much needed shower and go in search of some food as I’ve had only a salad and some hummus (oh, and some beer) since leaving home. The front desk lady tries very hard to get me to go to their new hotel restaurant which, I’m sure is very good but, after being locked in airports and on airplanes for quite some time, I want to get out onto Irish soil. She points me to Dolan’s Pub, a few blocks away. This is truly a traditional Irish pub which, unfortunately, has just closed to get ready for the dinner crowd. I look at the gentleman with sad eyes and, with my best exaggerated American accent, tell him how I haven’t eaten in days (well, it seems like days, anyway). Gareth, the assistant manager, takes pity on me and offers me some Irish stew. I also ask for a cup of coffee as I’m trying to stay awake to adapt to the time zone. This Irish stew is the best I have ever had (it’s also the only Irish stew I’ve ever had, but it’s still really good). I finally surrender and go back to the hotel for a nap.

Waking, not at all refreshed, I drag myself out of bed and head back to Dolan’s Pub for a drink and some music. It’s fairly quiet when I arrive which gives me the chance to talk to Pat, the bartender, who has worked at Dolan’s for fifteen years. He’s been there so long that he has a plaque with his name and favorite drink installed on the bar just over one of the bar stools. I order a half-pint of Guinness even though I’ve never really liked Guinness. It seems right that my first drink in Ireland should be a Guinness. Pat pulls me one (this just means that he pulls on the tap which dispenses the beer) which takes a few minutes as he must let it rest in between pulls to get the exact amount of head (get your mind out of there). I taste it and am completely amazed. This tastes like no Guinness I’ve ever tried. Where have they been hiding this stuff? Pat tells me that Guinness doesn’t travel well which is why it’s so much better here. I think I’m in love.

The pub begins filling up and, after a short time, I meet Elizabeth, a French tour guide who is married to an Irishman. She runs back and forth serving her demanding French group before sitting down to have a well-deserved glass of wine. When I make a comment about drinking wine in a traditional pub and that you can take the woman out of France but, obviously you can’t take the France out of the woman, she informs me that she only drinks Guinness when she donates blood. Um, what? Yes, it turns out that there’s quite a bit of iron in Guinness so, after you donate blood here in Ireland, they give you a Guinness to help you recover. Really? I donate blood back home and, while I appreciate the cookies and juice afterwards, I think they’d get a lot more donors if they offered you a beer. This explains Guinness’ slogan “Guinness is good for you.”

After drinking more Guinness, listening to amazing live Irish music, and learning the difference between a Jig and a Reel (it’s the amount of steps), I head back to the hotel to make an appointment to donate blood.

Tomorrow – I storm the castle.

On a Wing and a Prayer Having Fun Storming the Castle