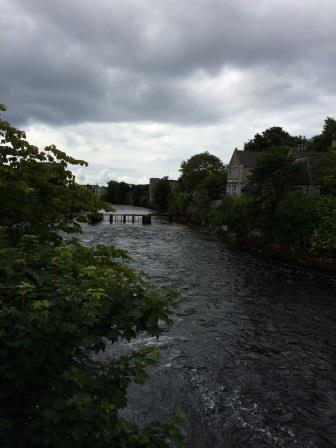 Today I have my first experience on Irish buses. It’s the final day of the Galway Arts Festival and, as it’s just over an hour by bus, I’m ready to hit the road. Everybody I’ve talked to tells me that Galway is a great city, festival or not. Then again, you can’t swing a dead cat (or however the phrase goes) without hitting a festival in the summer in Galway.

Before I do that however, I have some business to take care of. I’m supposed to check out of this hotel on Sunday and thought I’d travel over to Dublin that day. As you voted to “drop me” in Phoenix Park I must get there sometime. But between trying to get to Galway, as well as a visit to the Cliffs of Moher, I seemed to be short a day. And then a volunteer opportunity presented itself for Monday and, well, this is why I try not to plan very much as they’re meant to be changed anyway, so it seems like a waste of time. I check with the hotel about availability and rates, not because it’s so spectacular (it’s not), but because the location is great and I don’t want to spend time packing when I could be doing so much more. The lady at the front desk tells me it will be €65 per night if I book one night and €55 per night if I book two. As I paid much less due to the original Cheap Tickets deal, I’m convinced I can do better. I decide to head to Galway and leave the rest for later.

I head out of the hotel to walk the seven blocks or so to the bus station. After a quick stop to pick up a coffee, I arrive at the station and encounter a closed ticket office but open machines. As this is my first time on the Irish bus system called Bus Ēireann I’m not too proud to ask for help. I find a nice gentleman standing near the machine and politely ask for help. I have always depended on the kindness of strangers (just call me Blanche DuBois).

Ticket in hand I stroll into the station cafe to pick up a yogurt and coffee to take along for the ride and, before you know it, my bus is boarding. I plan to read the paper I bought but end up talking with Ken, a Brinks truck security guard who has been working all night and is heading home to catch some sleep. He works a lot as he has five kids and one on the way. His kids range in age from eighteen years old to two year-old twins (and the fetus) and, he says, there will probably be more as he likes what causes kids. Okay then.

I arrive in Galway at around 10:30am when the bus drops me right near Eyre (pronounced air) Square. I stop by the hostel on the corner (just curious if they have a private room for tomorrow night as this place looks really interesting; they don’t). While there, I pick up a brochure for a free walking tour. As my experience with these has been very good – see “The Pied Piper of Portland” – I consider it. It’s currently 10:50 and the tour begins at 11:00. The brochure says the meeting point is The Skeffington Arms Bar in Eyre Square. I decide that, if I happen to come across it, I’ll take the tour. I look up from my brochure and right in front of me is the Skeffington Arms Bar with a guy standing in front holding a big, red sign saying “FREE TOUR.” Okay, you don’t have to shout. I’ll take the tour.

For two hours Connor, our guide entertains us with facts and stories about this fascinating city of Galway. We learn the reason for the plaques over a majority of doors in the city – something about a Franciscan monk door-to-door salesmen, and

what the blue tent across the river is for – it’s part of the Arts Festival and tonight it will house a silent disco. The room will be silent and everyone in attendance will receive a set of headphones which will play one of two stations that only those with the headphones will hear. We also hear why the carving on the courthouse building has uneven scales of justice – the Irish feel as they have always been treated as second-class citizens. Next, we visit the Spanish Arch, a really old wall with arches carved into it that is a big part of Galway history and the Galway Cathedral, which opened in 1965 and is the last stone cathedral built in Europe. To say the place is beautiful would do it a disservice. This place shows it doesn’t have to be old for its beauty to impress. 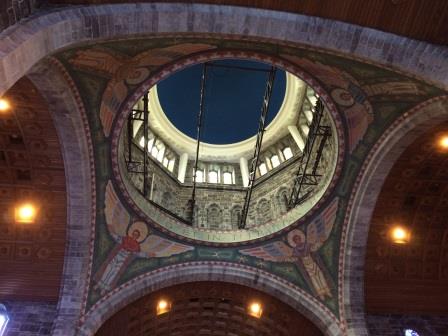 Connor goes on to show us the Protestant church and explains that it has a four sided tower with clocks on three of the sides. Apparently, the Protestants didn’t think the Catholics needed to know what time it is so they didn’t install a clock on the side of the tower which faced the catholic side of town. This is supposedly where the phrase, “I wouldn’t give him the time of day” comes from.

Finally, Connor explains that, while Eyre Square’s name was changed to John F. Kennedy Memorial Parks after he spoke there, and was subsequently assassinated, everyone still calls is Eyre Square as it’s just fun to say.

The tour ends and I tip Connor before proceeding off to lunch and to explore the place. Being the final day of the Arts Festival, Shop Street, as well as every other street here is mobbed. There’s energy in the air with musicians, artists, street performers and anyone who has learned to play ukulele in the last 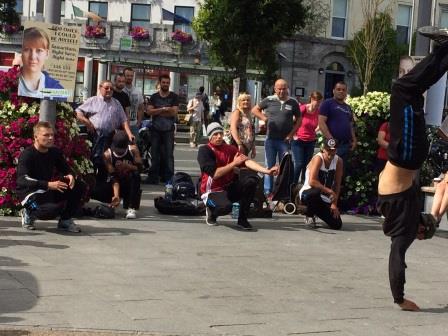 week throwing a hat or guitar case on the sidewalk and making a little money from their talent) or in some cases, lack of it). I stop in a candy shop that is something out of Willy Wonka and the Chocolate Factory, a few more shops and I take a seat at a bar/cafe, have a Guinness (big surprise) and soak it all up. Life is good. 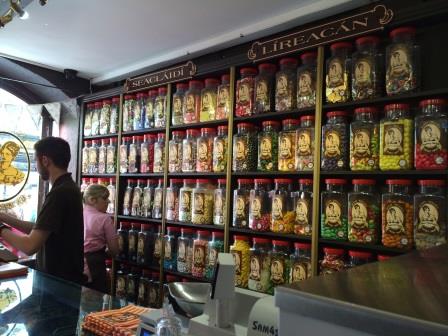 After relaxing a bit in Eyre Square, it’s time to head to the bus station to board the bus and head back to Limerick. When I arrive at the bus station I decide that I’ll stop for dinner on the way back to the hotel. First I must book a couple of extra nights in the hotel and, as I don’t want to have to stop at the hotel, I pop inside the bus station and use their internet. I log into Cheap Tickets (otherwise known as www.ihavenomoneybutlovetotravel.com) and book two nights in my current hotel for $103.79. That’s a savings of $44 from what I was offered at the front desk.

Tomorrow – A visit to The Cliffs of Insanity

**Have you entered the Drop Me Anywhere Travel Limerick Contest yet? Some have entered in the comment section on the entry page and others have entered through the contact page listed on the top (they’re shy). Whichever way you do it, do it by July 31!