A Visit to the Cliffs of Insanity

An expert on the Irish bus system (ha!), today I have big plans for another road-trip. I lace up my hiking boots and head out the door of the hotel and walk the seven blocks to the bus station where I catch bus which will eventually take me to the Cliffs of Moher. Everybody from locals, to tourists I’ve met, to my mechanic back home has told me the Cliffs are a must. 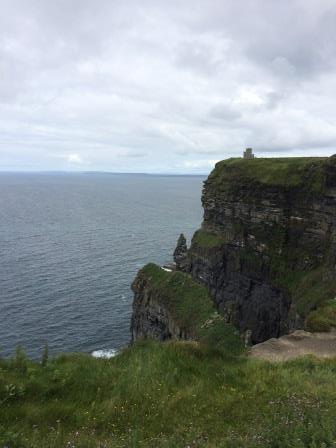 The Cliffs of Moher is Ireland’s most visited natural attraction with nearly a million visitors per year. They rise to 702 feet (214 meters) above the Atlantic Ocean at their highest point and stretch along the coast for five miles (eight kilometers). Formed by thousands of years of erosion they’re named after the ruined promontory fort “Mothar” which was demolished during the Napoleonic wars to make room for a signal tower. All this amazing history and my favorite part, as a fan of the movie The Princess Bride, is that these are The Cliffs of Insanity! 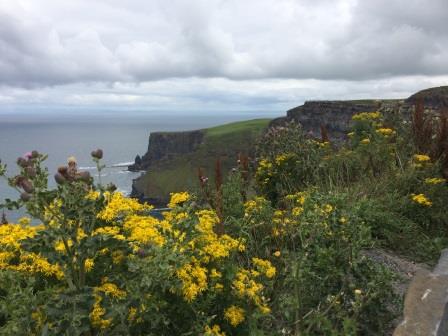 By 11:30 I’ve arrived at the Visitors center and have purchased a ticket. The price is €6 but, if you tell them you’ve taken Bus Ēireann, your ticket will only be €4. From the visitors center I see long lines of people, to my left and to my right, walking uphill as if on a pilgrimage to Mecca, or even a climb up the Khumbu Ice Fall on Everest. I head out to join the party. I decided to first walk towards O’Brien’s Tower, a castle-like tower on the Cliffs to the right. 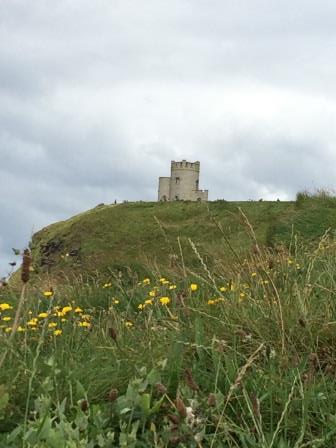 The walk is up steps and paved inclines. It will get your heart pumping, but just for a few minutes and is not much of a strain for most people. The other people don’t get in the way unless, of course, you want to get that perfect photo, and then you’ll only have to wait a minute for them to complete theirs. And, if you ask them nicely, they’ll take your photo once they’re finished.

I stop at various points along the wall to take photos and absorb the awe-inspiring view. It’s inconceivable (this word, I do not think it means what you think it means)! When I finally make it to the tower, there’s an extra fee to climb up to the top. As I don’t feel the view can possibly be any better than it already is, I pass it up and continue along the path. Soon I come upon a fence with a sign stating that I am now entering a private farm and the owners cannot be responsible if I, you know, fall over the side of the cliff to a spectacular death. I’m okay with that so I cut around the side of the fence with everybody else and walk along the dirt path to admire the view just a bit longer. 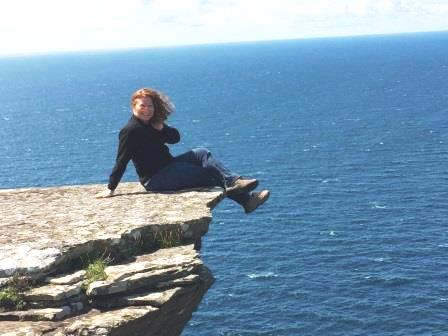 Forty-five minutes later, I head back to the visitors center to see their exhibition on the Cliffs and pick-up a sandwich. The exhibition is a nice 10-15 minute walk through the history and geology of the Cliffs of Moher. It’s worth it if only to see how all of the continents used to fit together into one giant puzzle called the continent of Pangaea.

I pick up a steak and ale pie (note to self: make an appointment with a cardiologist after this trip) and head off for a hike along the Cliffs to the town of Liscannor, The bus schedule lists Liscannor as a stop along the route back to Limerick so I figure I can pick up the bus there. I begin my hike back up towards the left, once again taking in the beautiful views. I stop here and there to take photos for myself and often for others as this view is too beautiful for a selfie. I pass by people speaking nearly every language imaginable and make some observations – the Spanish, French and Italian will stop in the middle of the trail to talk or take photos, completely oblivious to anybody else trying to pass. The Germans and eastern Europeans walk two, three and even four people side-by-side and knock off anyone coming from the other direction if they don’t get out of the way. The Americans talk really loudly, even when they’re walking right next to each other.

As this is not America and they don’t feel the need to act like my mommy and fence me in, I take advantage and sit on the edges of the cliffs which, honestly, looks a lot more dangerous than it is as I get on the ground a few feet away and crawl to the edge. Note to all those who are terrified of getting less than ten feet from the edge – these cliffs have been here for thousands of years and it’s unlikely that the ground you are standing on will suddenly melt away and fall into the sea. Still, you never know. 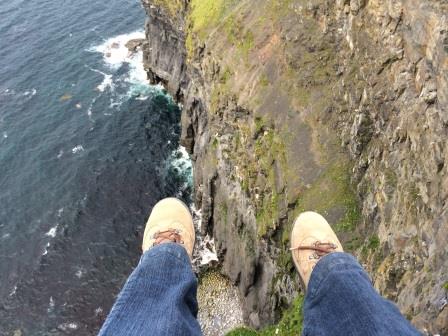 I continue walking when I run into a couple of American Franciscan Friars. Brother Frantisek and Brother Bernardino allow me to ask questions about their religion and being a Friar. I ask what makes a Franciscan a Franciscan (other than the whole Rice-A-Roni thing). They explain that they take a vow of poverty (what a coincidence, so have I) and that, as the word ‘friar’ comes from the Latin word ‘frater’ which means ‘brother,’ they are called brothers. They live in houses, usually of four to six brothers, in regular neighborhoods. It’s pretty much like Animal House without the drinking, the smoking and the sex (oh yeh, there’s that vow too). I wonder if they nickname each other privately, you know, Brother Bluto, Brother Otter and Brother Flounder. They tend to live in poorer areas so they can assist the community.

As I continue on, the crowds lessen. I run into an area consisting of hundreds of cairns. Hikers will know that cairns are piles of stacked rocks used to mark hiking trails without disturbing the environment. The cairns I see mark no specific spot and nobody seems to have an explanation for them except to say they’re probably built by people passing by just to do it. I tell a kid I run into that they’re fairy houses that the fairies live in at night when all of the people leave.

As I continue on I should note what you should bring with you to the cliffs. Bring a T-shirt, a sweater, a warm jacket and a raincoat. Yup, you never know what the weather will be here. Oh, and ladies, if you bring nothing else, bring a hair clip or ponytail holder. It’s windy. Not the nice, cooling breeze kind of windy, but the, “oh my God, it’s a twister Dorothy” kind of windy. I tell the lady in the gift shop that they should sell them and they’d make a fortune.

After walking for some time, I decide to give up my plan to walk to Liscannor and head back as, after I’m back at the Visitors center, I will have hiked for three hours, and besides, they have ice cream there.

I grab a 99 – ice cream with a chocolate Flake bar in the top – which costs €2.00 (hmmm) and, faster than you can say, “My name is Inigo Montoya, you killed my father, prepare to die,” the bus has arrived and I’m on my way back to Limerick.