Dublin Dreams and a Reality Check

I awake early this morning ready to move on from Limerick and head for Dublin, the capital city of Ireland and the location of Phoenix Park, where you, my Virtual Travel Buddies voted to “drop me” this time. I pack up my luggage which is never fun for me. I’m not one of those, “I only go carry-on even if I’m traveling for a year straight in eight different climate zones and going on safari and a tour of the world’s greatest opera houses.” No, that’s not me. It’s about the shoes and the product (hair, face, body, etc). I’m sure my new drag queen friends would understand. Still, I only pack what I can carry myself. And while it’s only a short distance to the train station, I have no desire to drag my rolling suitcase and carry-on (plus a small back-pack) uphill seven blocks so, quicker than you can say “Taxi!” I’m in one. I mention that I need coffee and hope the coffee shop that serves terrible coffee at the train station is open. The nice Irish cab driver says, “Here, let me pull over and you can run into the shop and pick up some coffee and a pastry.” There’s no extra charge. This would never happen in the U.S.

Before long I’m at the train station getting the ticket printed which I ordered online from Irish Rail. I board the commuter train for a half-hour before transferring over to the train to Dublin. Once I board the train to Dublin I search for my assigned seat. This train is packed and, after storing my luggage in the designated area up front, I find my seat located across from a middle-aged woman who doesn’t speak to me but stares at me for most of the trip with some sort of white gunk sticking to the edges of her mouth. I work on my computer for most of the way to Dublin while she continues to stare at me (hoping I don’t have unnamed white gunk on my mouth). The trip in full is around two hours and, due to the packed train, not very comfortable.

Just before noon I arrive at the train station and head out front to buy a ticket for the LUAS, the new light rail in Dublin. The very full train arrives, I board and two stops later, I’m walking around searching for my hostel (yup, I said hostel).

Let me say something to all of you who would say, “A hostel? You are suffering from a midlife crisis.” Today’s hostels are much different than those of the seventies and eighties (well, some are much different). I was originally put in contact with the Generator Hostel through a Twitter chat and, while in Limerick, I reserved a private room with a private bath. I check in and head up to my room and I’m pleasantly surprised. I have a queen sized bed along with a single bed. The room overlooks Smithfield Square and has a lovely balcony. I drag my bags inside and attempt to step out onto my lovely balcony. The door’s locked. I see the housekeeper in the hallway and, while I ask for extra hangers (Two? Really? There are two hangars?) I also ask about the balcony door.

“Well, yes. And people get drunk and, you know, may try to jump.”

Those silly drunken kids ruin it for everyone.

I unpack and decide to venture out to where you’ve sent me. After a fifteen-minute 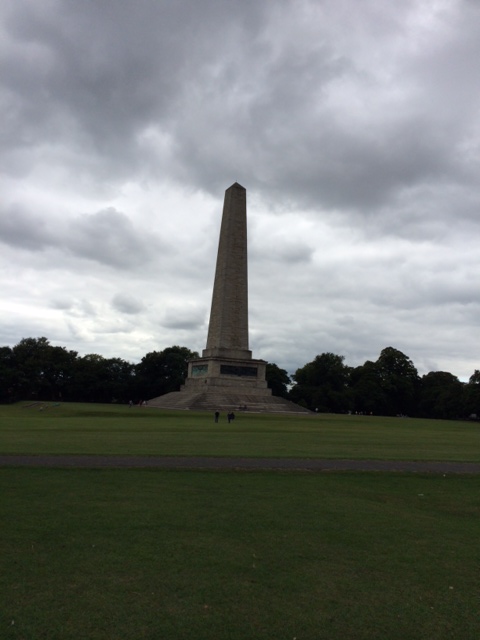 walk, I see Phoenix Park! At 1747 acres, Phoenix Park is one of the largest enclosed recreational spaces within any European Capital City. It’s larger than all of London’s city parks put together and is twice the area of New York’s Central Park; and there’s no better way to see it than on a bicycle. For the bargain price of €5, Paul, “The Bike Man of Phoenix Park,” and his dog Frankie, both of whom work at Phoenix Park Bike Hire, get me situated with a set of wheels for two hours. As it’s late in the day Paul says I can have it for three hours if I need. He hands me a map having marked locations he says I shouldn’t miss and I’m  cruising down the main street which runs through the park. After about fifteen minutes I see a familiar site on my left. Yes, it’s the one in the photo announcing where you chose to “drop me” announced in “The Land of Leprechauns” the Wellington Testimonial. Built in 1861 as a monument honoring the Duke of Wellington, at 62 meters (just over 200 feet), it’s the tallest obelisk in Europe. You told me where to go and I made it! It’s always satisfying. 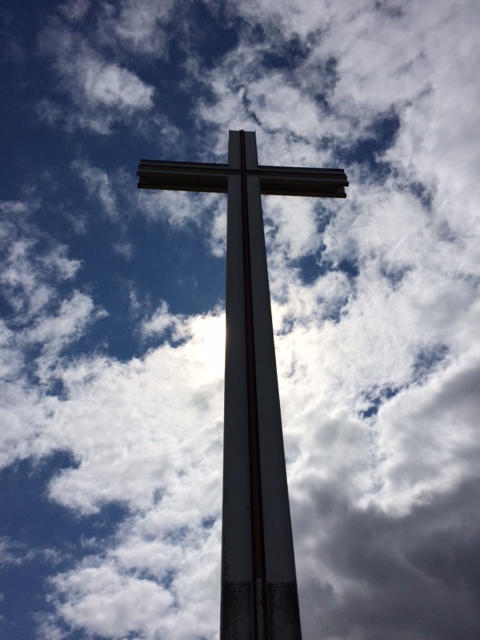 As I ride through the park, I stop at the Papal Cross which was erected to honor the visit of Pope John Paul in 1979, as well as the Áras an Uachtaráin, the official residence of the President of Ireland. I ride past, shouting “top of the morning to

you!” and move on to the U.S. Ambassador’s Residence. I

ride up to the gate and yell, “I’m here! Can I come in for tea?” Nobody answers. Apparently he didn’t get my tweet that I’d hoped to visit (yes, I really did send that tweet).

When I continue my ride, I come across some of the famous deer who are well-known in Phoenix Park. I enjoy listening to the American guy ask his travel companion, “Are those reindeer?” He says it with such wonder that I think he expects Santa Clause to drop in any minute. 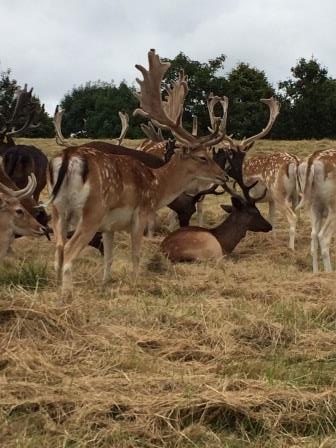 Riding further I pass by cricket fields (not the insect, but the sport) and stop at Farmleagh Estate to enjoy a nice cup of tea at the teahouse. Fully caffeinated, I hop back on my bike for a leisurely ride back to the entrance.

As I walk back, I’m disappointed by the neighborhood. I’ve been warned about crime and a heroin problem here in Dublin. I notice what appears to be a small drug deal going down between two men. I see many homeless sleeping on the streets and have been told not to go to Phoenix Park at night. It seems dirty and gritty. It’s a bit shocking having come from the small city of Limerick and the artsy town of Galway. I catch a quick meal at a random, fairly unfriendly Eastern European pub/restaurant – there is a large Eastern European population here in Dublin – before taking a short walk back to the hostel. I go to bed pissed off at Dublin for not being the city I’d hoped it would be.

Tomorrow – will Dublin win me over?