This evening, I head out to Café en Seine (much different than Café Insane) for dinner. As I walk in, I’m struck by the sheer beauty of the inside of the building and the decor. Built in the 1700’s as a Georgian home, it’s now an award-winning restaurant with a beautiful atmosphere. Between the skylights and the red and purple lighting, I feel as if I’m spending the evening eating my fish pie (a fish stew with puff pastry of the top) and drinking my wine, followed by my cappuccino, followed by my whiskey, in a Paris café. It’s a great backdrop while eating excellent food.

After my meal, I walk to the other side of Café en Seine to drink my whiskey while

having a nice chat with Amanda and Drew from America, she’s an Occupational Therapist and he’s a liquor distributor (yay, booze!). We sit and enjoy tonight’s entertainment, Frankly Buble (yup, that’s what he goes by). Despite the cheesy name, it’s really very enjoyable and the name is truth in advertising, though I must say it freaked me out when he finished singing “That’s Amore” and spoke in a deep Irish brogue.

Stomach full with great food, head full with great wine and whiskey, I go to sleep tonight with a different view of Dublin. The history, the food and, most of all, the people are winning me over. I figure out that my first impression was partially due to a bit of culture shock as I was coming from Limerick and Galway, smaller cities that, while charming, have less of the gritty reality of a big city like Dublin. And the people in Dublin are just as nice as the rest of the Irish I’ve met (seriously, the Irish have this hospitality thing down), it’s just that there are many tourists here – one in three people here is carrying a map, myself included – and those tend to be the pushy and rude people (not myself included).

I awake with a plan for the day – visit Christ Church Cathedral, Dublin Castle, St. Patrick’s Cathedral , the Temple Bar area and the Jameson’s Whiskey Distillery – but first, I must take care of some business. I had hoped to go to Kilkenny tomorrow for two days. Unfortunately, it’s a bank holiday (there’s one June 1, July 1 and August 1) which means everyone is getting out of town for the weekend. It seems Kilkenny is full. I even check AirBnB where I find one which appears to be available until it’s not (AirBnB hosts, please update your calendars). I check Cork and the same appears to be true there. I look on websites to see what Dublin availability is, as well as asking the Generator Hostel, where I’m staying and, the same appears to be true. I’m beginning to get concerned. I decide that the first order of business is figuring out where I’ll sleep tomorrow. I wander down the street and stop in a couple of hotels and B&B’s with no luck when I come upon what looks like a travel agency. I ring the bell and when I’m buzzed in I explain my situation and ask if they can help. The lady very nicely explains that they’re a company who handles inbound tours and, unfortunately, can’t help me in this situation. She suggests I head to Belfast as it’s only about an hour-and-a-half away and it’s not a holiday in Northern Ireland. That’s really a great option as I’ve wanted to see Belfast but, at this point, I’ve lost some time seeing Dublin while looking for a place to stay and, well, this city has grown on me and I’m not yet finished with it.

I head over to a street of hostels and B&B’s which the lady has recommended but with no luck (Jesus, Mary and Joseph, there’s no room at the inn). I begin walking in the general direction of Christ Church when I decide to stop in one last hotel. They have availability, but only for Friday night and not Saturday. They direct me across the street to another small hotel. I nearly walk by giving in to defeat and decide to double back. By some miracle, Steph at the front desk of the Eliza Lodge says she has both double and single rooms available. I ask the price of the single and it’s a very affordable €60 for each night. Score! After a few minutes of arranging, Steph’s face turns worried and she says, “Oh no, I’m sorry but the air conditioning isn’t working in that room. I can offer you one of the doubles for €100.”

“Where I live it’s 116 degrees Fahrenheit which is like a million Celsius and I haven’t had air conditioning in any of my rooms yet. This is Ireland!” I reply.

“Well, if you don’t mind, I can offer it to you for €50 per night including breakfast,” she says.

Woo-hoo! I smile for the rest of the day. 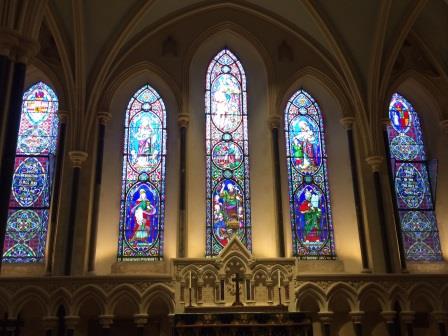 Room set, I head just up the street to Christ Church Cathedral. Founded in 1030, daily services are still conducted here throughout the week. Strongbow, the leader of the Anglo-Normans who captured Dublin in 1170 was buried here in 1176 and, due to the time it took to build as well as various additions, Christ Church contains both rounded Roman arches and pointed Gothic arches. After walking through the main area with the many chapels and areas to worship – the stained glass windows are phenomenal – I head down to the medieval crypt which, by the way, would make a great wine cellar should they choose to redecorate. 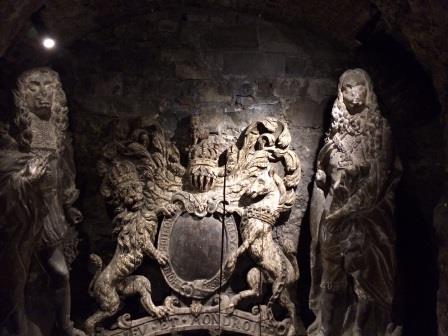 Next, I walk down the street to Dublin Castle. Admission is €4.50 and I decide to take the one-hour guided tour offered by the castle. After a short wait, I join our guide, Jane who spends an hour showing us some of the highlights including the Throne Room (note to self: get thee a throne), the Picture (Portrait) Gallery, which is the former State Dining Room where many official dinners take place and St. Patrick’s Hall, where the President of Ireland is inaugurated. We’re also lucky enough to go into the Undercroft, a subterranean chamber which allows us to see the original castle walls and part of a tenth century Viking town defensive bank. 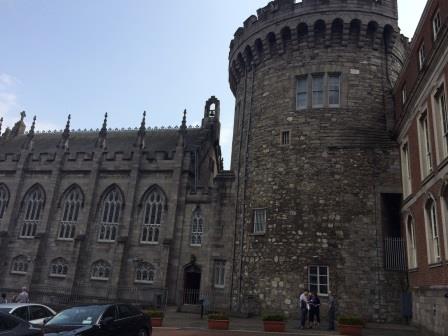 Now that I’m staying a couple of extra nights, I take advantage of the extra time by not running around Dublin and seeing it like Chevy Chase did the Grand Canyon in National Lampoon’s Vacation. I leave St. Patrick’s Cathedral for tomorrow and head straight towards the whiskey. 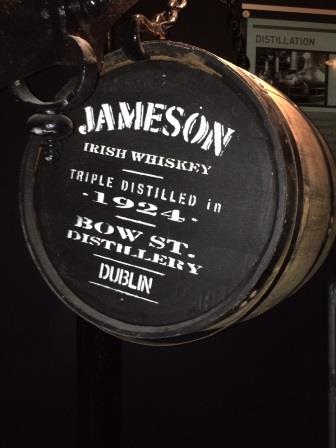 I arrive at the Old Jameson Distillery (€14.00) and catch the next open tour which leaves in about 30 minutes. I browse the Jameson shop (do I really need a Jameson electrical adapter?) and take a seat at the bar where I meet Min. We get to talking and she tells me she’s Canadian and has just graduated from the University of Southern California with a degree in theatre. She’s traveling around Europe for a few months before beginning work as an unemployed actor.

They call our group and we’re met by our guide, Pat (every Tom, Dick and Harry is named Pat in Ireland). We begin in a small theatre where Pat introduces a film on the Jameson history (it’s actually pretty interesting). When it concludes, Pat asks for volunteers to be whiskey tasters at the end of the tour. (Guess who’s hand is the first raised). We walk through various rooms while Pat tells us what makes Jameson’s whiskey different than all other whiskey’s (Ma nishtanah halailah hazeh – my fellow Jews will get this); American whiskey is distilled once, Scottish, twice and Irish is distilled three times, as well as the maturation process. Before long, Pat is pouring Min, myself and six others shots of American, Scottish and Irish Whiskey’s to taste (or, in a few cases, drink the whole glass) and as he points out the differences, which are very clear in this side-by-side comparison. Following this, our entire group is given straight whiskey or a whiskey and ginger ale cocktail (straight please) before our group of eight tasters are awarded our certificates certifying us as “Qualified Whiskey Tasters” (like I didn’t know that before, but it’s nice to have the certificate in case anyone questions it). 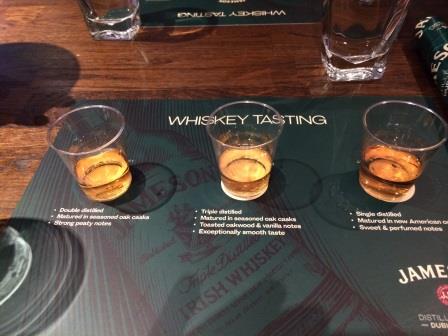