After enjoying our whisky, uh, I mean Jameson’s tour, Min and I decide to catch some dinner together. This is the joy of solo travel; you meet so many great people. We head over to Ireland’s oldest pub, the Brazen Head. Established in 1198, the Brazen Head has served some of those famous Irish writers that I admire so much.

We sit in the courtyard having a beer and talking about what we’ve seen and done so far. As she’s just arrived in Dublin today after flying in from Venice, I give her the lowdown on what I’ve seen so far. Min is not just a budding actress, but also a budding playwrite, and she’s excited to visit the Writer’s Museum as well as some live theatre. She’s noticed a poster of an Arthur Miller play currently being performed and I’ve found Samuel Beckett’s, Waiting for Godot. We’re just two writers having a traditional Irish meal of Bangers and Mash, Steak and Ale Stew, and beer, of course, while discussing plays and playwrites at a pub in which they all drank. Life is good.

After drinking a few whiskies at Jameson’s and a pint at the Brazen Head, we finish up and decide to go on a search for the location of the theatre showing Waiting for Godot. After all, we don’t want to keep him waiting. We’d looked up the location of the theatre on my iPad while at the pub and committed it to our whisky and Guinness infused memories. What could go wrong?

An hour later we’re looking at maps by the light of an iPad while asserting, “We must be really close.” Turning a corner we hear the sounds of traditional Irish music coming from a pub. Min had expressed a burning desire to hear some so we decide to have only a half-pint (we haven’t completely lost our minds) while

stopping in for a visit. As we sit and enjoy the music, Min notices a portrait on the wall next to the stage (which I’ve already commented is incredibly ugly) that begins moving. The man in it looks as if he’s smiling and speaking to us. I know what you’re thinking, Ladies, it’s time to stop the whisky and beer. I’d agree if it weren’t completely real. It’s very Harry Potter like.

We set out again to find the Smock Alley Theatre as Godot has waited long enough. A half-hour later, and after asking a few people for directions, as well as being offered a bottle of wine from a guy on the street, we find the theatre! Now that we know where it is, I plan to visit with Mr. Beckett tomorrow night to see if Godot shows up. Min will go after returning from a short trip to Manchester, England. We walk back to the hostel (Min is also staying there) and vow to touch base in the next two days to catch-up on our adventures.

The next morning I wake up, pack my bags and catch a taxi to my new digs, the Eliza Lodge. I check into my really cute, non-air conditioned room (it’s expected to be a balmy 73 degrees today, how will I survive?). It’s very small but truly has everything I need. Steph has apologized that there’s no view but I find this to my advantage. It has some windows that face an alley and a fire escape but, being in the Temple Bar district, if it had views, it would also have a whole lot of noise, especially on a bank holiday weekend. The fates are in my favor.

As these extra days in Dublin are a bonus and I’m no longer rushing around the city trying to see everything quickly, I decide to have a nice brunch. I head over to

a restaurant appropriately named, The Church as, well, it’s located in an old church building, formerly known as St. Mary’s. Built in 1702, there’s a self-guided tour which provides tidbits of trivia including: Arthur Guinness (I think he should be sainted) married his wife Olivia Whitmore here in St. Mary’s; George Frederick Handel, who wrote the Messiah, was a regular visitor and played the organ in St. Mary’s; there were six crypts in the basement in which thirty-two skeletal remains were found during excavation to convert the building. I enjoy a nice meal of baked salmon on polenta and relax with a leisurely cappuccino. 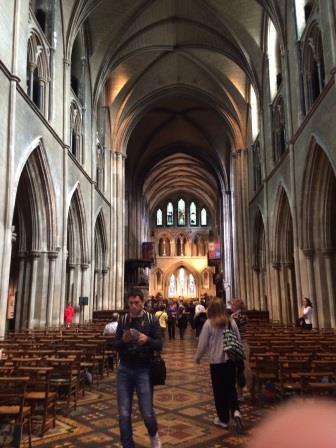 Next, it’s time to set out to explore St. Patrick’s Cathedral (lunch at church and now a visit to a cathedral, an exciting day for this Jewish girl) which is just down the street. Built by the Normans in 1191, it was rebuilt in the 13th century, and the west tower was rebuilt in 1370 after a fire. St. Patrick is said to have baptized converts to Christianity at a well that once existed alongside the Cathedral. As with the other churches and cathedrals I’ve visited, there are many memorials to people long gone, but what I find striking about St. Patrick’s are the beautiful stained glass windows. Perhaps it’s the way the sun is shining today but the colors in them are, dare I say, heavenly. 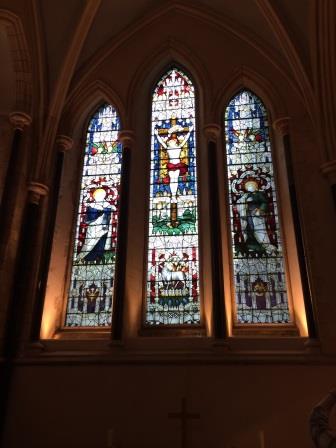 After spending some time reading the inscriptions on the memorials and admiring the impressive stained glass, I head over to the Smock Alley Theatre to purchase a ticket for tonight’s performance of Waiting for Godot before taking some time to simply walk through the city with no particular destination in mind. This is one of my favorite things to do while traveling as you never know what you’ll come upon. I enjoy taking in the city and people watching before going back to the hotel to freshen up.

An hour later, I head out to the pub across the street from my hotel and right in the heart of the Temple Bar district. While sitting at the bar, I meet a group of seven drunk Dutch boys (really, they’re like twenty-one) who have trekked from the Netherlands to Dublin for four nights. They began drinking at noon and have continued until now. The sole (apparently) sober one, Vas, and I have a nice talk while his friends obviously wonder why he’s talking with a forty-something instead of a twenty-something (ah, an older woman, perhaps he’s the smart one). I eat my fish and chips and drink my Guinness (surprise) and head off to the theatre.

seat in the place. About fifteen minutes prior to show time, the doors from the lobby are opened and we make our way in. I read Godot while in high school but have never seen it performed. I’m in awe of the great performances of these actors, and this theatre makes you feel as if you’re sitting right on the stage. Vladimir, Estragon and I wait for two hours but Godot never shows up. While it was a great evening, and Vladimir and Estragon will be waiting again tomorrow evening, I will not as I have a date with Mr. Shakespeare (I call him Billy).

After the show, I plan to walk the three blocks back to the hotel and do some work, but Dublin calls. I hear music coming from well, everywhere, and I stop in a pub just across from my hotel, take a seat, order a beer, and enjoy a bit of a sing-along. An hour later, I make it back across the street and into bed. This Dublin bonus day turns out to be very satisfying and I’m looking forward to enjoying my last day in in this city.

The winner of the Limerick Contest was determined by an expert panel of judges including my new friends – Min from Canada, whom I met at the Jameson Distillery, as well as Paedar and Siobahn, who you’ll remember from Guinness is Good for You, as well as Paedar’s wife and Siobahn’s mother Anya.

And the Winner is

To Ireland, young Carol has come.

For merriment, adventure and fun.

She stopped at a pub,

For Guinness and grub,

And “Erin Go Braugh-less” was done.