Today’s the day I leave beautiful Emerald Isle and I do so with a heavy heart. Yes, I’ve seen some amazing sights – natural, cultural, historical and alcohol (Jameson’s and Guinness are alcohol related but also cultural and historical), and yes I’ve had great food and drink. But what has truly made this trip so special is the Irish hospitality, and that will be the toughest thing to leave behind.

Peadar has so generously (and typically Irish) offered to drive me to the airport, but first, he has prepared breakfast. It’s my last bowl of porridge in Ireland.

“What’s porridge?” you ask. “Other than what Hansel and Gretel ate in the forest. “

We Americans would call it oatmeal, but this is like no oatmeal I’ve ever had. Yup, along with the Guinness and potatoes, add this to the ‘nobody does it better’ list of Ireland. I completely understand why Oliver Twist wanted more. I finish my porridge like a good little girl, say my goodbyes to Siobáhn and Áine (the girls are still fast asleep) and, after loading my luggage in the car, we’re off.

Thirty minutes later Peadar and I arrive at the Shannon airport, say our goodbyes and I head inside. When I check in at the counter (narrowly beating a group of teenage, American soccer players to the counter whose adult chaperones keep trying to cut in front) I see a sign taped to the counter stating:

If you are denied boarding or if your flight is delayed for at least two hours,     Ask at the check-in counter or boarding gate for the text stating your rights, particularly with regard to compensation and assistance

What? I suddenly have flashbacks of my flight with Rent-A-Wreck Airlines coming here. I tell the desk agent about my two mechanical delay, four-hour flight delay, middle-of-the-night departure to get here. I mention that, upon arrival I wrote to customer service and asked if they could change my return by a day for no extra charge as I basically lost a day in Europe. I was clear that I would pay for my own accommodations. It seemed like a fair deal. Their website said I’d hear from them within 3-5 days and the auto-response E-mail said I hear from them within 5-7 days. As I was supposed to return ten days later, this was within my time-frame. Ten days later, I’ve heard nothing and their Twitter person says I’ll hear from them within sixty days. Really, if you’re that backed up in your responses to your customers’ complaints, perhaps you need to look at your service. The agent looks me in the eyes and says, “You should call customer service when you get back because they may owe you some money or tickets.” Note taken. I forget to ask for the text noted in the sign but remember to take a photo of the sign. 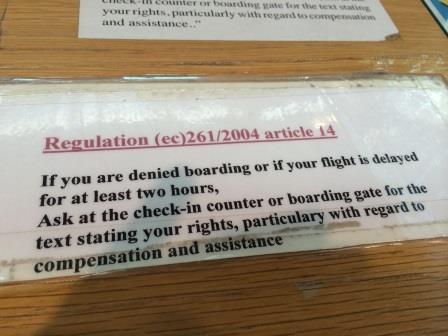 I also ask for seat reassignment because, once again, they’ve changed my window seat to an aisle for the second leg of the trip. The agent tells me that there are available window seats but they’re an extra charge. Nice, I reserve an assigned seat ahead of time, and then they change it and offer to sell it back to me.

I check my bag and trek to security as well as customs and immigration. I find this interesting as I paid extra for flights with a longer layover in Philadelphia after speaking with Rent-A-Wreck Airlines by phone when I booked the flight. I questioned whether an eighty-minute layover would be sufficient to go through customs and immigration in Philly and the agent and I agreed it was best for me to schedule a longer layover. Hmmmm.

I stop to spend the last of my Euro coin. As I can’t exchange coin when I return to the States it would be a waste if I don’t spend it, so chocolate and coffee seem like a smart financial move. I encounter the proverbial “Ugly American” who, with her daughter (I believe they’re from the soccer group), pushes her way in front of me and loudly complains about the automatic coffee/espresso/latte machine. “I can’t believe that this is all they have. No coffee shop! And next time, we don’t do a group trip. This has been the worst experience!” I cringe thinking of what these amazingly hospitable Irish folks are thinking. It takes everything I have not speak up and explain to her that she represents her country when she’s traveling and this is not a great representation of Americans.

I head over to the gate where I wait just a little while when I hear, “We’ll be boarding momentarily so please take a moment to gather your belongings and have your boarding passes ready.”

People gather and shuffle and generally mentally prepare for the seven-and-a-half hour flight. We wait, and wait. Nothing happens. Finally, after another twenty minutes, another announcement is made.

“Ladies and gentlemen, the mechanics are just getting on board to check out an issue. We apologize for this delay and will let you know as soon as we know something.”

Three mechanical delays in one trip and here’s me, without my wrench.

Luckily, this one is fixed quickly and we begin boarding. The Teenage Mutant Ninja Soccer Group is seated all in one section. Unfortunately, it’s in my section. I’m surrounded! I surrender. We depart only thirty minutes late and the very rambunctious group quiets down after take-off and I sleep.

We make up some time and nearly seven-hours later, the flight attendant announces our final approach. Apparently, the kid seated directly in front of me believes this is the perfect moment to vomit. Ah yes, that about says it all.

Upon landing I realize the earlier flight doesn’t leave for eighty minutes so I head to that gate and ask if I can get on it. I’m asked if I have checked bags and. . . wait for it. . . that means I can’t do it. I understand this is FAA regulation as you must fly with your bags but I was hoping that, due to the telephone agent’s misinformation, they might grab my bag and throw it on this plane as they have plenty of time. Not so much.

I wander around the airport for five hours and head back to the gate. I ask the gate agent if he can change my seat to a window. “No, there’s nothing available,” he says with a sneer (literally, he sneered). I then ask if he has a printout of the text of Regulation (ec)261/2004 article 14 while showing him the photo. He rifles through the drawers and simply says no.

I find a Dutch girl who is flying for the first time and going to meet a guy she met online (yikes). She has a window seat yet says, “I didn’t ask for it, they just gave it to me.”

Really? I ask if she’d be willing to trade, which she kindly enough agrees to. 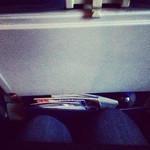 Unfortunately, it ends up being in front of the emergency exit which means it doesn’t recline. The fantastic thing is the seat in front of me reclines so I get to experience exactly how it would feel to be locked in a pet carrier for four hours. Still I manage to fall asleep for just a few minutes before the older-man next to me nudges me and asks what time it is.

We land just after 8:00pm and I head down to baggage claim to, well, claim my baggage. The bags roll down onto the conveyor belt. Steadily I see people dragging their bags off and heading out the door. The bag arrival becomes slower and eventually stops. I look up and nearly everybody is gone. “They wouldn’t dare,” I say out loud. I walk down to the lost luggage area and notice my bag is sitting behind the rope. I ask the gentleman at the desk to get it for me and when I look at the tag I see that, sure enough, while I was not allowed to go on the earlier flight because I had checked my bag, they never asked my bag if it had perhaps, checked a human as my bag took the earlier flight.

I arrive home and read through Regulation (ec)261/2004 article 14 and realize that, although it’s a European Union Regulation, it applies to flights landing in the EU. I immediately file a complaint referring to this with Rent-A-Wreck Airlines and ask for the €600 I believe I am owed. I haven’t heard back and plan to file a complaint with the FAA (like DMA on Facebook where I’ll update the results of the battle)

Please note – I’m a traveler and understand that flying is hard. I don’t normally complain about the small things and try to find the humor in it all. Still the flights for this trip seemed to be more trying than most.

Coming up – The Good, The Bad and The Thank-you’s where I’ll also give you a compilation of all of the links of the providers as well as some costing information so you’ll know approximately how much to budget.

Ireland, I Adare You The Good, the Bad and the Thank-you’s – Ireland