Today I have a plan; to spend quality time with the beach. It’s the first day that I don’t set an alarm. Unfortunately, the construction workers did set an alarm and, by 8:20am, there’s pounding and my bed is vibrating, and not in a good way. This does not come as a surprise as, the one thing I neglected to mention previously is that they seem to be remodeling some of the twelve rooms here. During my first stay here, I looked at it as a good thing as it got me out of bed and experiencing all that this area had to offer. Today it just feels like a cruel joke. And the bonus is, this time, they’re working on the two rooms directly below mine. At least this morning it’s intermittent, so I turn on the coffee maker (with actual coffee thanks to Stewart and Chucho’s ‘coffee grounds to go’ service) and sit out on my balcony listening to the waves crash while absorbing the sea air and caffeine goodness.

After one cup of coffee and a half-hour of jackhammer vibrations, I throw on my bathing suit (and a half a bottle of sunscreen), pour another cup, and take it downstairs to the beach right outside the door. Aahhh. . I should explain a little about the sunscreen; first, use it! I’m not your mother, but I care about you and want you to have many years to travel and enjoy meeting the locals. You cannot do this if you die of melanoma, not to mention the pain of a sunburn that will ruin your vacation or make your flight home give a new definition to the word hell (“But I never burn!” Yeh, you will here. And even if you don’t, it’s unhealthy). Due to the forty pound weight allowance, I didn’t bring sunscreen as I knew I could purchase it here. This brings us to my second point about using sunscreen here; most places in Akumal sell organic sunscreen. The sea turtles here are protected and, as they swim in the lagoon and people go and snorkel with them, in order to protect them they don’t allow the plethora of chemicals that can be found in regular sunscreen. This is great; protect the turtles! What’s not so great is that this organic stuff goes onto your skin white, and stays white. After I apply it, I look as if I’m preparing to attend Clown College. I sit alone in a beach chair, under an umbrella, drinking coffee and writing, as waves crash around me.

I finish my coffee and decide to venture into the water for a bit to cool off. I’ve worn my water sandals (yup, one of the seven pairs of shoes I brought) due to the sargassum. Sargassum is a sea weed found here which is sometimes washed ashore due to winds and tides (while sargassum can be found in Akumal, it’s much different than sarcasm, which can be found on Drop Me Anywhere). It tends to be seasonal (Drop Me Anywhere provides it year-round for your reading enjoyment) but has a purpose. It bonds with sand, and helps form a natural barrier in order to protect against erosion. While they did some clean-up at the beginning of the season, they’ve left it for a while now as to protect the beaches from erosion as it’s still hurricane season (yes, ‘tis the season has nothing to do with Christmas here). It’s piled fairly high along the water’s edge. Another reason for my water sandals is that there are quite a few rocks near the shoreline beneath the water in this area of the beach. While the shoes save my feet, the giant wave which knocks me over ensures that I walk away leaving some blood from my leg here in Akumal.

I relax under my beach umbrella for just a bit longer before deciding to grab some lunch. While I can rent a bicycle from the Vista Del Mar Hotel (as well as snorkel equipment and kayaks), it’s really hot and I just 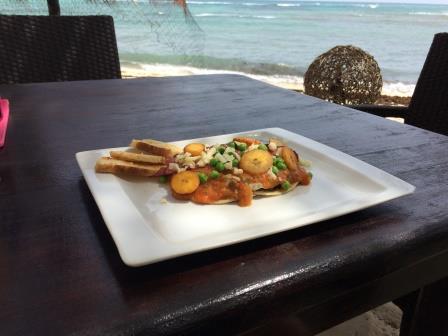 don’t want to work that hard (walking is also an option as the area is quite small). I hop in my car and drive down the road further than I’ve yet been (I’ve not made it past my hotel) to discover new adventures in potholes, as well as some lovely houses and condos for rent (thinking of going? Check out VRBO.com to rent vacation homes around the world). I stop at a beachfront restaurant connected to some condos and, once again order a fine brunch of Huevos Motuleños (this one is just a bit more fancy than the last I ordered in “Monday in the Mérida Mercado”). What I didn’t order are ants, but apparently they come free with brunch as they’re camping out in the sand under my seat (and all of the other seats). I sit with my legs crossed in my chair while cursing the ants below.

After cleaning my plate, I head on over to Turtle Bay Café and Bakery to sample the homemade ice cream, which I hear is excellent. I try their dark chocolate/jalapeño as well as the Nutella ice cream before ordering a scoop of Akumal Road just to see what potholes taste like (it’s similar to Rocky Road with some brownie thrown in the mix),. I take a seat and enjoy my ice cream and my final day in Mexico.

From here, I stop by the Library to say goodbye to my new friends there. I only plan to stay for a few minutes, but Anne is out picking up the children so I sit with Angel, Leti and Tere, the library workers I’ve met, and try to learn how to say, “Peek-A-Boo” in Spanish. Anne returns from her first run, kids pile out of the car and, before I notice, she’s off again to pick up another load. As the kids excitedly run onto the playground, into the book area and up to the drawing boards, many stop to give me a hug. So much for a quick stop to say goodbye. We play a little bit of volleyball (actually, just keeping the soccer ball in the air), kick the soccer ball through the tire swing (Angel, who works there seems a bit addicted), and draw pictures in the sand with sticks. My girl Stephanie (which I’ve now learned is actually spelled Estefani) never leaves my side. 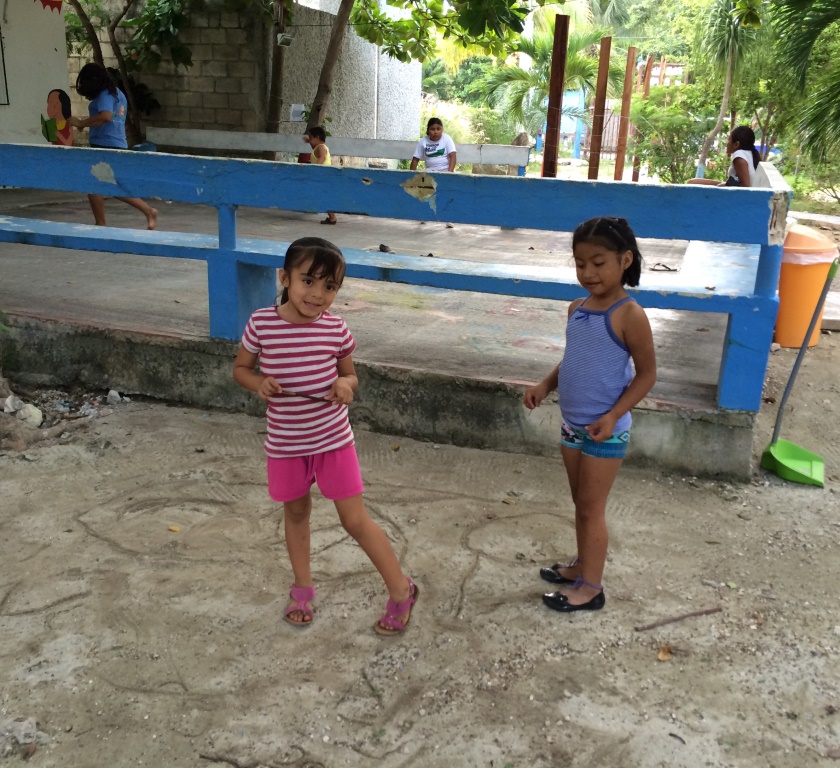 After an hour, Anne is back and I decide that leaving here will never be easy, and there’s no time like the present. I give Estefani a hug and head out, as saying goodbye to each child will be emotionally impossible for me. I stop out front to speak with Anne about my experience, the incredible kids I’ve met and the amazing work she’s doing there. We promise to keep in touch as I adjust my sunglasses in order for her not to see the tears behind them (I think she notices). 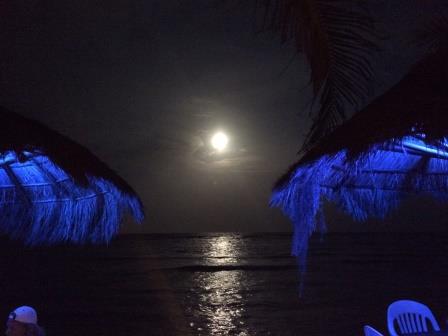 I shower and head over to La Buena Vida for one last meal (that makes it five nights here). When finished, I walk back to sit on my balcony, drink wine (or what’s left of it after I knock my glass off the nightstand and attempt a cleanup of the nightstand, floor, and bed sheets with the Kleenex in the room) and listen to the crashing waves. Just as I procrastinated leaving the library, I do so in going to bed as I don’t want to say goodbye to this either.

Tomorrow – I fly! Always an adventure.