Today I wake up with a plan. I know, I just used the four-letter “P” word but, I do tend to plan one or two days in advance. Besides, today I’m getting together with others, so we’ve arranged a time and place to meet. First, who are these others? They’re two bloggers I met on Twitter. One (Blogger A) is a Berliner and one (Blogger B) is a woman from Poland who lives in Chicago and happens to be in Berlin for a few days. We’ve arranged to meet in the Mitte and, as I was there yesterday, I confidently board the S –train

to transfer to another S-train (yeh, I got this). I only wish I had time to stop for a coffee. I don’t want to miss my train and, even though there seems to be a Starbucks on every corner, I’ve not seen people walking around – or riding trains – while carrying a cup of coffee. Once I board the second train I see a sign with a bottle tipping over and a red circle with a line through it. I’m not sure whether this means “no drinks on the train” or “don’t spill your drink on the train.” Then a lady boards the train and confuses me even more. In her hands she carries a full-on tea-pot and regular coffee mug. She takes a seat and, as the train pulls away, she begins pouring tea (I assume) from her tea-pot. Darn, I should have picked up a coffee-to-go.

I arrive at Friederstraße station and find our meeting point at a store outside. I’m early, so I grab a coffee and wait. Before long Blogger A shows up. She mentions that Blogger B has tweeted to her saying she’s running a bit late but should arrive soon. Apparently soon is forty-five minutes later. Toes cold, we head inside to catch a cup of coffee and get to know each other in person. One thing about bloggers; they’re not often shy (remember, I’m a writer, not a blogger, but still, not shy). When we get to discussing the economy in the U.S. a few years ago Blogger B and I disagree. She believes it was just upper-middle class people whining that they were now middle-class, and I believe I was conserving toilet paper and losing my house. She becomes very defensive and refuses to discuss it further.

We decide that walking and seeing the sites might be a better idea. Blogger A shows us some really interesting architecture. We see a striking synagogue. The outside is beautiful and I’d love to see the inside. Unfortunately, in many places in the world, including this one, synagogues and other Jewish sites are not open to the public as churches are. This is due to the simple reality of threats against them.

We move on to see some plain and, in some cases, seemingly dilapidated, buildings that have amazing restaurants, schools and event spaces inside. We step into one event space where I swear I can smell the smoke and hear the laughter and music of the ghosts within. It’s easy to picture men in suits and women dressed to the nines carrying drinks and smoking cigarettes held in long holders while laughing the night away in the 1920’s. 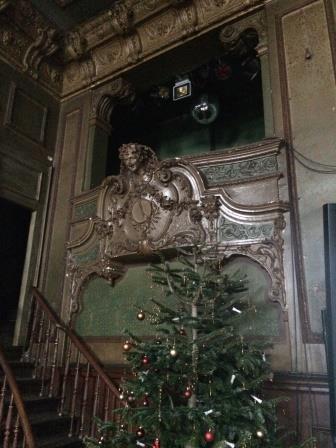 We stop for local soda drink while they discuss hipsters (hate the term, hate the whole “hipster” vibe, can’t relate). The conversation moves on to other things and I mention that I downloaded Netflix last night. I explain that I’d had a particularly tough day and needed a bit of mindless entertainment and, as CNN was the only TV station in English, I thought Netflix might be a good idea. Blogger A responds, “You know, I admire the Americans and British so much. They’re so strong to be able to come to a country like Germany and then complain that the TV stations are in German.”

“You know, how you come here and expect that the stations would be in English.”

“Uh, I don’t think that’s what I said at all. Perhaps that’s what you heard, but it’s not what I said.” I say, trying to hold back my redheaded temper. “I never expected them to be in English, I just said I needed some lighthearted mindlessness and the news wasn’t doing it for me.”

“You don’t understand. I’m giving you a compliment. I’m saying how strong you are.”

I can’t speak and really just want to flee. I want to say, “I think you both misunderstand and insult me.”

We move on to a book shop and then head over to the tram where we say goodbye to Blogger A, and Blogger B and I depart as she heads to the airport and I return to finish seeing the Memorial to the Jews Murdered in Europe. On my way I make a stop at the Brandenburg Gate, where there’s a Christmas tree and a Chanukah Menorah making it all fancy for the season. 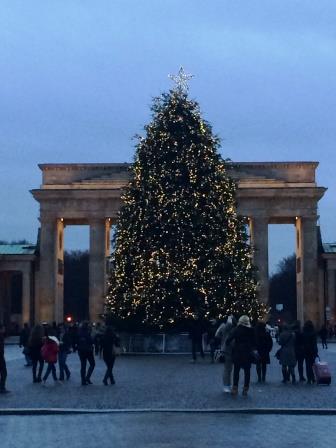 It’s 3:30 and starting to get dark (I’m getting a serious vitamin D deficiency). When I approach the stairs to the memorial today there’s no crowd and I walk right in. I pass by the displays I saw yesterday and head

straight to the Room of Dimensions. This is the room with last notes, letters and poems by those captured and, usually, soon to die. Today I have time to take it in. I sit on some of the benches provided and read the sad testimony. How does a mother say goodbye to her children knowing that she, and they, were going to be killed, often in a barbaric way? There’s a final poem from poet Miklós Radnóti written a few days before he was killed at age thirty-five.

I move on to the Room of Families which, through text, documents and photos, tells the stories of families in various countries who were affected. Some escaped, some went to camps yet somehow survived, and most died either directly at the hands of the Nazi’s or by starvation or disease in camps. This room shows that it didn’t matter if you were rich or poor; an accountant, a doctor, a butcher or a mother; from Poland, Hungary or Germany; if you were Jewish, disabled, a gypsy or homosexual, you were a target.

The next room is the Hall of Names. It’s a dark room with screens on each side. Projected on each screen are ever-changing names of the Jews murdered and missing from all over Europe. The audio fills the room telling their name and a short biography in both German and English. If you sat and listened to each person’s story (each one lasts about a minute) it would take you six-years, seven-months and twenty-seven days.

I move next, to the Room of Sites. Through a variety of maps, film and photo’s this room shows the geographical extent of the Holocaust throughout Europe. Historical items represent 220 of the worst places of persecution.

At the end I find the Commemoration Site Portal, additional databases and video archives. I plan to return to the park across the street where the Memorial to the Homosexuals Persecuted under the National Socialist Regime is located.

On the way home I make a quick stop at the grocery store. It’s small, but should have everything I need, If only I could read the signs and packages. I pick-up some vegetables and feta cheese to make a salad, some yogurt, honey and eggs before picking up some chicken kabobs (seems easy enough to cook in an oven that doesn’t speak English) and approaching the lady at the cheese counter. She speaks some English and recommends a hard cheese to me. I buy some of that and ask where I might find almonds. Unfortunately, she doesn’t understand. I find a package of mixed nuts and point to the almond on it. She says, “Oh, mandel,” and happily tells me to follow her.

She shows me to a different aisle and lo-and-behold, there are the mandel (mandels?). So now I know that the Jewish Biscotti cookie I make, known as Mandel Brot, using my Bubbie’s (grandmother’s) recipe means almond cookie! I’m learning German. . . very slowly.

Tomorrow – A simple shopping trip turns into highway robbery, and a visit to Checkpoint Charlie

In The Middle Plans Thwarted – KaDeWe, Crooks and Checkpoint Charlie