Following a beer with my new mysterious friend Peter, it’s now time for a Glüwein chaser, so I head to Charlottenburg where there’s a Christmas market at the palace. This is a two-bus trip but, after a day of plans not working out, I’ve vowed to conquer the Berlin bus system.

Two connections and a short walk later (and some kind instruction from two non-English speaking German ladies), I step off the bus and look up where I see the lights tracking through the sky pointing the way. It’s either the Christmas market or the Bat Signal. After a short walk towards the lights (“Go towards the light Carol Ann”) I detect the scent of cinnamon and sausages. The palace is lit-up like a fairytale with falling snowflakes being projected on the castle. I expect Elsa to pop-out any minute screaming “Let it Go.” The colors projected on the castle begin to change from blue, to green, to purple. I see the Christmas tree beautifully lit-up in the window. I look around the market and I see Germans beautifully lit-up in the glow of the glasses of Glüwein they’ve drunk. 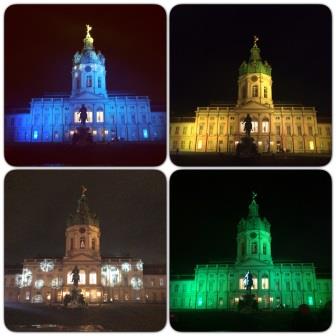 I stop for the requisite Glüwein as well as a bratwurst while admiring the beauty of the lights before strolling through the market passed shopping booths and children’s rides before the weather changes. It doesn’t change much as it’s rained every day that I’ve been here. But add a bit more rain and crazy, strong winds and the term, “not fit for man or beast” comes to mind. I’ve planned which trains I’ll return to the flat on, but am not positive as to where the station is. I ask a young lady at the market who tells me to just head out on the main street directly in front of me, turn right and it’s just down the street. I head out as directed and, after ten-minutes, I see nothing. I’m wet and I’m cold and I have a bad attitude. I duck into a tiny convenience store and ask the man behind the counter where the train station is.

Feeling hopeful, I head back out into the storm, but not before buying a bag of chips (they’re bound to make me feel better). They’re hamburger flavored, an acquired taste which I acquire after eating five of them. After another two-hours of walking (okay, maybe seven-minutes, but it seems like a long 200-meters) and a few curse words (in English, as I haven’t yet learned too many swear words in German yet) I finally spot the station. I head down the stairs and take a breath. I’m cold, wet and miserable. My coat and umbrella have done little to keep anything below my waist dry and my jeans are glued to my cold thighs.

After another ten minutes (really, everything seems to run in ten-minute increments) my train arrives. Without any trouble, I exit at the correct station to transfer to the next station which will drop me just blocks from the flat. When I finally get upstairs, Ziegfried, the cat is waiting for me and we’re both happy to see each other. Me, because I’m finally in a warm, dry place and him, because he wants dinner. Still, we appreciate each other for our own reasons.

I wake up in the morning determined to try to find yoga again. This time I take my regular bus, the 29 straight up the Ku’damm and exit at Uhlandstraße. I turn left and, like a beacon in last night’s storm I see a sign for Lagoa Yoga (it’s actually just a simple A-frame sign but no less appreciated). Lagoa is in what looks like an office building. I take the lift (it’s the elevator but I’m trying to be all European) to the fourth floor, pay my €16 and receive instruction on how to use the lockers. I grab a mat and, as I’m early, I sit in peace in the yoga room for a bit. Before long, others join and begin grabbing mats, blocks, straps, blankets and pillows (these Germans sure do use a lot of equipment).

Ten minutes later I hear relaxing music and Lena, the instructor, enters. She starts speaking in German and, as many yoga instructors use the Sanskrit terms for poses and I speak German about as well as I speak Sanskrit, this isn’t too much of a problem. We spend the next ninety minutes bending, stretching, breathing and even throwing in a chant here and there. At one point Lena comes over to adjust me and give me some instruction. I don’t want her to think I’m not a good student so I whisper, “Nicht kein sprechen Deutsche,” not at all sure that this is how you say, “I don’t speak German,” but pretty sure that if I say it wrong it will only reinforce my point. She whispers the instruction to me in English.

At the end of class I approach Lena and tell her how much I needed and enjoyed it, and let her know that I plan on returning. When I exit the room, cinnamon tea has been set out for all of us yogis to enjoy. I spend some time speaking with Andrea, a wife and mother who works at the university library. It feels good to make a connection, whether it’s with a fellow yogi or just someone who speaks English.

I head into the locker room to change clothes (at home I live in my yoga pants, but I think the Germans are a little more formal) and step outside to catch the bus heading further down the Ku’damm dropping me, once again, in front of the KaDeWe. Yes, I’m giving it another try.

If you remember, yesterday’s attempt at yoga and the KaDaWe did not go well. There was the whole not finding the bus stop situation and then the robbery (read about it in Plans Thwarted – KaDeWe, Crooks and Checkpoint Charlie). After today’s successful trip to yoga, I have new-found confidence and am giving the KaDeWe once more shot. Besides, it’s a straight shot on the 19/29 bus.

Once again, the bus drops me right in front of the KaDeWe however, this time, there is no crowd standing at the doors, no police cars and no serious men in black suits. I walk in right by the jewelry counters. Yup, I can see why the robbers stole the jewelry. Might not be such a good idea to put it ten feet from the door. 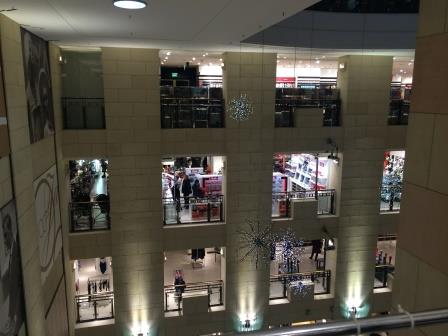 I immediately find the lift up to the sixth floor as I’ve been told this is where I can catch a bite to eat. A little history of the KaDeWe first; in 1907, this spectacular department store opened and was the place to see and be seen. It offered high-end shopping and eventually, a food court filled with tasteful delights (and not one Hotdog on a Stick). In 1933, during the National Socialist era, a banking group forced the Jewish owners to sell by withholding credits, and appointed an “Aryan” managing director. Then, in 1943 an American military airplane crashed into KaDeWe and the store nearly burned to the ground. In 1950, the KaDeWe became a symbol of the new beginning after the war. 180,000 Berliners celebrated the reopening of the first two floors on July 3, 1950. After a few years, other new floors were added, which brings me to the sixth floor, the “gourmet floor.”

I’m hungry so the first order of business is ordering up a bowl of Soupe de potiron (pumpkin soup) and Tarte de potiron au chévre (pumpkin and cheese tarte). As Starbucks in Germany stopped carrying their Pumpkin Spiced Latte two months ago (sacrilege), I’ve decided to get my fill of pumpkin at lunch today. The meal, while not cheap, is fantastic. I’m feeling oh, so civilized today.

Stomach full, I wander the gourmet floor buying lavender tea and admiring the various gourmet jams, salts, meats, and spray cheese. Wait, what? Aah yes, they have an American section where for a mere €9.99 you can choose to buy the fine American delicacy of spray cheese in a can or Jiff peanut butter (a proud moment for me).

I move on to the massage chairs (like the ones you sit in at the Sharper Image for hours pretending that you’re actually considering buying when you’re just really getting a cheap massage). I have a couple of pleasant conversations with various people who come join me in the chairs. 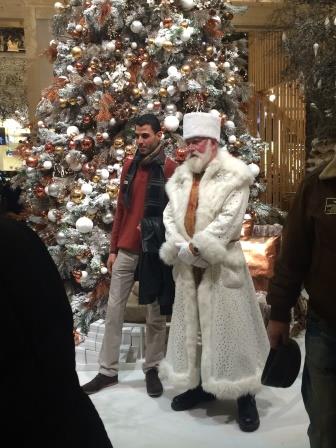 After ten minutes (okay, it might have been forty-five minutes, but I’ve been stressed), I get up, wave to Santa Claus, and head outside to catch the bus back to the flat. I consider this a successful day as I actually had a successful do-over.

Tomorrow – We go to the Jewish Museum and yet another Christmas Market.

***The next vote is up and I need you to decide where I travel to next! Head over to the Current Vote – Looking for Love ***