Today I put on my glass slippers and head out to the palace. Well, to be more realistic, I throw on my tennis shoes (very American, but I blame a current back issue) and head over to check-out someone else’s palace. It’s Schloss Charlottenburg and it used to belong to Sophie Charlotte of Hanover.

Built in 1695 and expanded in the 1700’s, it was the summer residence of Sophie Charlotte (apparently she was a snow bird), Electress (sure sounds like a superhero) of Brandenburg, later to become Queen of Prussia. Upon entry, I come upon a desk which rents out audio tour headsets. I decide to tour without a headset by simply reading the signs in each room (there are enough voices in my head). Both the signs and the audio tour provide information as to what the room was used for as well as histories of the paintings, sculptures and furniture which fill the rooms. While many rooms in the palace were damaged or destroyed in bombings in WWII, they’ve gone to great lengths to carefully restore them, working from an inventory made after Charlotte’s death (poor thing dies of pneumonia in 1705 at age thirty-six). Furniture was either restored or, along with artwork, was brought from other castles in the area from the same time period which have since closed down.

I walk from one sitting room to the next – there must have been a lot of sitting going on as there are many of these rooms – as I imagine the important people and their courtiers who occupied them. I feel a bit as if I’ve walked into Downton Abbey. While I’m a fan of artwork, I’m not thrilled by the paintings here. Most are portraits of various royalty, as well as government influencers and governmental medal winners. After viewing about one-hundred portraits I understand that, if they’d had a Nikon, they would have taken the photo and it would be posted on some “Manager of the Year” plaque. I pass one painting described as “Dido telling her sister Anna about her love for Aeneas. Somehow my mind makes this very dirty.

As for the clothing of the time, the men in the portraits seem to all be wearing red-sashes and ruffled shirts reminiscent of the famous “Puffy Shirt” from the Seinfeld episode. The women wear beautiful dresses that put my yoga pants, which I’ve been known to wear all day, to shame. And the dresses have enormous padding on the hips which I find fantastic. I spend most of my life attempting to make my hips look smaller and these women made large hips a fashion statement.

After viewing the old wing, I enter the new wing which is open for the first time today after being closed for restoration, for two years. Frederick the Great had the New Wing built from 1740–1742

It turns out that I’m not a huge fan of tapestries either (unless you’re talking Carole King), but I love, love, love the chandeliers. Whether it’s the time period or simply Charlotte’s taste (then again, she’d died by the time the new wing was built), the chandeliers are made from glass, some in a simple style and some are quite ornate. I imagine the candlelight bouncing of the glass was quite magical. And the furniture – I love the furniture. I find it fascinating to think that 350-400 years ago, some royalty’s ass sat right on that red-velvet. It’s much better than that chair I bought from IKEA. My favorite room is the Silvered Chamber, in the new wing. It’s decorated in greyish-blue with silver leaf accents and beautiful glass chandeliers and sconces, and feels as if this were the Snow Queen’s quarters. 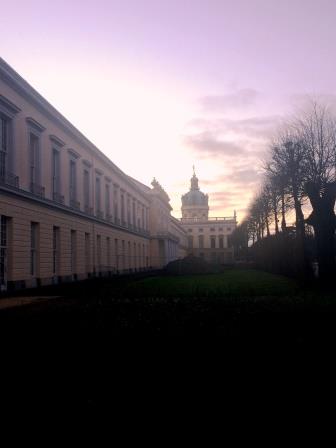 I take a quick walk through the garden which I’m sure is much more impressive in the spring and summer, before walking out to the front of the palace to enjoy a quick sausage and Glühwein at the Christmas market. It’s a special night because, for the first time since I’ve been here (eleven days) it’s not raining! People aren’t crowded under one of the large umbrellas but instead, sitting outside at tall wooden tables, under scattered heat-lamps, enjoying the cold (yet dry) weather under the crescent moon. I grab my Glühwein (with cranberries this time) and take a seat at a table. Before long, Tom, Eve and Emile ask if they can share my table.

“Sure. Your baby looks cold. Please get him close to the heat lamp,” I tell them (hardy German kids).

Eve then asks, “Do you have grandchildren?”

What?! “That’s it, you can no longer share my table!” I want to say. But, since the kid did nothing wrong, I don’t want to punish him.

With a sideways laugh to show my shock and horror at her question (okay, maybe it just showed that I was a bit taken aback) I say a polite, “No,” and make pleasant conversation.

They ask where I’m from and what I’m doing here. I tell them I’m from America and explain the whole Drop Me Anywhere project. They’re very excited by it. They’re here from Hamburg visiting family for the holidays. Tom gives me his business card and tells me that if I get to Hamburg I should make contact as he works at a marketing company and sits in an office coming up with cool ideas like mine, but doesn’t get to do them. They should be careful as, well, you never know where I’ll turn up.

They’ve known each other for thirteen-years and got married seven years ago. They got divorced six years ago. We have a great conversation over a couple of Glühweins talking about marriage, kids and cats. They, of course, ask about my project. The conversation gets deep and I tell them my personal reasons for doing it (buy the book). It turns out Germans can actually loosen up and have really good conversations once they get to know you. I really appreciate this connection as they’re great people, and also because, although they speak English, I know that it requires more effort and concentration for them than speaking German.

After an hour or so, we all decide it’s time to leave. Nicole, Kai and I trade contact information and vow to, you know, “Friend” each other. They kindly offer to drive me to my train station. It’s cold outside and the windows are fogging up. Kai shouts at us to “stop breathing!” (I like these two) and, after a few minutes, they’ve dropped me at my train station and I’m headed back in for the night

**Apologies for the lack of photos of the interior of the palace but they do not allow them for publication. I may be a rule breaker, but I respect copy rights.

Tomorrow – The Good, The Bad and The Thank-You’s

Nothing Says Christmas Like Potato Latkes and Warm Beer A final day in Berlin, The Bundestag, and the Bar