Today I find myself in Lübeck, Germany, the former “Queen of the Hanseatic League” (a title I hope to attain one day) and whose Old Town was, in 1987, declared a UNESCO World Heritage site (don’t think I’ll ever have that title). Note that the term “Hanseatic comes from the German word “Hanse,” which means “valiant band or group.” (I’m now thinking that if I had a band I’d name it “Hanseatic League.”) With just an hour-and-a-half train ride, I’ve crossed over from the former East Germany to the former West Germany and I’ve moved from the twenty-first century to medieval times. Enter Lübeck and you feel as if Robin Hood might jump out at you at any point and say, “Give me your money.” (Obviously Robin has no clue exactly how poor I am).

I’m staying at two different hotels here. One, the Stadt Lübeck, is your basic European hotel room near the train station (which also happens to be only about a ten-minute

walk from the old city) and has a nice breakfast included. And one is the Atlantic Hotel, which, well, there’s no comparison. The Atlantic is considered new, although it opened in 2010. That’s very new when you consider the city was founded in 1143 with settlements beginning as early as 819. While the hotel’s fitness center, sauna and steam room are closed for remodeling (the chances you take traveling in a place during low-season), I have a bathtub! When you’re on the road full-time, you don’t often splurge on places with bathtubs and such. The included buffet breakfast is amazing (I may or may not have visited the buffet four times) and the internet works quickly and doesn’t block half the things you’re trying to see – again, not porn (well, maybe porn, I didn’t try), just random sites and applications. And the service here is fantastic. Yes, this hotel runs quite a bit more money but, coming from the Travel/Tourism/Hospitality industry, I’m a believer that it costs nothing extra to be polite and to give good service which is why I’m not very understanding of poor service anywhere. And speaking of service, room service makes me feel special. Not only does someone else cook for me, but they deliver it to my room on a cart with silver covers and a flower. Room service is my boyfriend, and we have a date in Lübeck.

So now, onto my Lübeck highlights:

I walk into the information center and check-out their audio walking tour. For €7.50 for three-hours I get a box to hang around my neck which clearly shouts, “I’m a tourist and I have no idea where I’m going.” I plug in my own earbuds (they have them if you don’t) and I’m set to go, but not before buying a “Happy Day Card” for €13 for two days. This allows me free rides on the local transportation as well as discounts to various tourist attractions and sites. I head off ready to explore.

I step outside the Tourist Information Center and into history. I begin with the Holstentor, or Holsten Gate, the landmark of the town and the old city gate. From the outside this place is magical. From the inside it’s even more impressive. Built between 1464 and 1478, it began leaning forward pretty much from the time it was built (typical contractor, built it on marshy land). The inside contains the Museum Holstentor. For €6 (plus a 25% discount with a Happy Day Card), I spend the next hour walking up and down between the two towers reading about the history of the tower, medieval life in this town and looking at cannonballs, suits of armor and torture equipment. Oh, and there’s chastity belt to control the loose medieval women. Most labels are in both German and English which makes this place even more interesting. 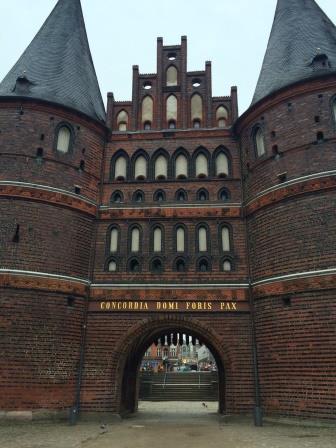 I step outside, expecting my audio-tour to tell me where to go next (really, I’ve become accustomed to my Virtual Travel Buddies telling me where to go, so I’m a good listener) but, contrary to what the lady at the tourist office has told me, while the tour box around my neck lists the numbered sites, it doesn’t tell me which way to turn to get there. Obviously they don’t understand that the TV show Lost was about me. 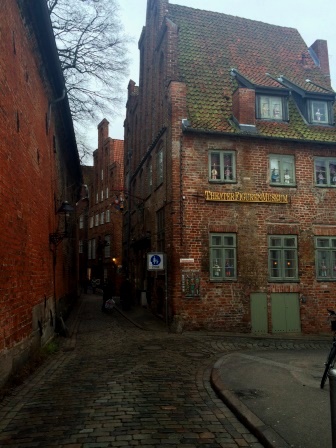 I find myself wandering and hoping I’ll come across some of the locations on the map. While there’s much to see here, it turns out that wandering through the alleyways here is also a legitimate tourist activity due to the history found in these alleyways. Only 25% of the city was destroyed in World War II bombings (strange to say “only” but it’s a small number compared to many other cities) so the medieval history was well-preserved. 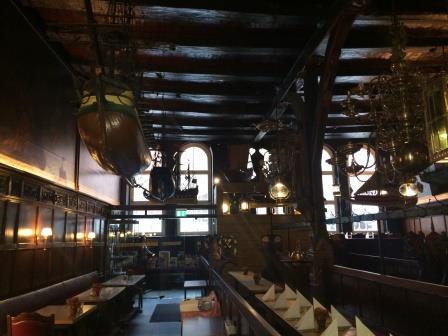 I come upon the Schiffergesellschaft Restaurant which happens to be on my audio tour. It’s the old headquarters of the seaman of the Hanseatic League and still hosts meetings of the captains of the Seaman’s’ Guild. I walk through and admire the dark, wood structure and models of ships hanging from the ceiling. As a former sailor, I feel at home.

As I walk through the town square, I’m a bit tired and decide to stop for a cappuccino at a pretty little cafe. The joy of wandering and benefit of getting lost (a lot) is what you find along the way. This cafe happens to be the famous Niederegger. Lübeck is famous for its marzipan and the Niederegger is the place to taste it. Niederegger ships marzipan all over the world. It’s like I have a built in sugar radar. “A marzipan torte? Why yes please.”

Now that I’m hyped up on caffeine and sugar (so much better than a Red Bull and a Twinkie) I head out to get lost some more. I pass by the Willy Brandt Haus – one of three Nobel Prize winners from Lübeck and something they’re very proud of – as well as the Buddenbrookhaus – the former home (and now museum) of Heinrich and Thomas Mann (another Nobel Prize winner) – as I just don’t have time to do everything, I head over to the Theater Figuren Museum (Museum of Theatre Puppets) which I find both fascinating and creepy. Puppets and marionettes were very important in German history as they provided entertainment as well as propaganda. This collection houses a variety of puppets from Germany, America, Africa, China, Thailand and many other places around the world. There are very few people here and, with just me and the puppets, it feels pretty spooky as I keep expecting Chucky to pop out at any moment. 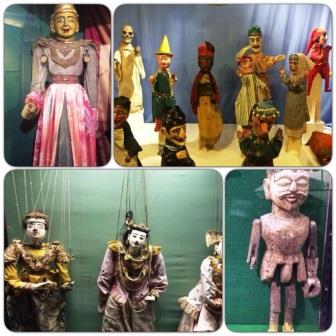 Next up, the Museum Quarter of the Kunsthalle and St. Anne’s Museums. The Kunsthalle features modern art (not a huge fan) and, due to my limited time, I choose to explore only St. Anne’s so as not to feel rushed. This museum, housed in the late Gothic cloister of 1512, provides me a view of the stunning architecture and art of the priory. I’ve museum’s audio tour which is well worth the €2. This is an incredible display of intricate religious art. The museum also contains another section of everyday life in the 1600-1800’s. I get a chance to see a typical living room, business area and many more important aspects of daily living from the time period (not one iPad or PlayStation to be found). Once I’ve seen the permanent exhibits in the museum, I stop in the room housing the temporary exhibit, “Die Navajo – Auf der Suche nach Harmonie.” Yes, I’ve traveled all the way from Arizona to Germany and, once again, find myself amongst the Navajo (I love irony). After viewing some of the Navajo jewelry, artwork and a Medicine Bag – apparently there was controversy about this as it was legally purchased, yet the Navajo did not want it displayed – I head out to take one more bath in my lovely hotel room before I head to Bremen tomorrow.

There are many more things to see in Lübeck than I had time for. If you’d like to know more, you can check out the website of Lübeck Tourism.

**Thanks to the Atlantic Hotel for their generosity in providing a room so I could learn more about Lübeck. My comments are, as always, an honest evaluation as, well, I just cannot tell a lie.