Today I wake up in Bremen. How I finally arrived here is a long, irritating train-story (wait, the story isn’t irritating, it was the experience that was irritating) that will be told at a later date. The important thing is that I’m here and, while the private room in the Townside Hostel which I’m staying in isn’t quite as luxurious as the beautiful Atlantic Hotel in Lübeck, it fits into my budget. And while I’m not thrilled that my fourth-floor room means climbing up a circular staircase of seventy-three steps (there’s only an elevator for luggage and I’m told I can’t crouch-down and try to get into it), I try to think of it as a substitute for not having the opportunity to go to the gym. This is made more difficult when I do laundry and the washer and dryer (I use the term loosely) is on the ground floor. Thanks to Bremen Touristik-Zentrale, I’m hopping on a train (tempting the train gods again) for the short trip to the city of Bremerhaven in order to visit the German Emigration Center.

After an uneventful, thirty-five minute trip (perhaps the train gods are repentant) I arrive at the main train station and find my way over to the emigration center, not entirely sure what to expect (am I being kicked out of the country already?). As I approach the desk I’m greeted with a friendly, “Hello, we’ve been expecting you.” I’m told a little

about the emigration center which, it turns out, is a museum documenting 300-years of emigration to, and immigration from Germany. (In case you didn’t know, that’s the difference between emigration and immigration.) I’m handed a “Boarding Pass” with a plastic-card inside and instructed to wave it in front of specific symbols along the way to hear the stories of emigrants and immigrants (these come in German and English). My boarding pass tells me that, as I travel through the place, I’ve been assigned the emigrant, Justina Tubbe and immigrant Şerife Seyitler. When I wave my card in specific locations along the way, I’ll hear their stories too.

I wait in front of a door and, within a few minutes, it opens and my group shuffles in. This is the “Third-Class Waiting Hall” (first a hostel, now traveling third-class. I’m really sinking low in the travel accommodations). The door closes automatically -it feels very much like entering the Haunted Mansion at Disneyland and I wonder if the lights will go out and there will be a flash of lightning with a skeleton hanging from the ceiling (boy,

did I cry when this happened when I was six). Doors lead us to the “docks” where it really feels as if we’re boarding a ship to new lands, with friends and relatives seeing us off (I know a little something about this). We continue on to the “Gallery of 7 Million” which contains audio and documents telling the stories of some of the emigrants. I learn that my emigrant, Justina Tubbe, was a widow with eight kids who headed to America to settle down in Nacadoches, Texas (more power to ya, Justina). I could stay in this area all day, but there’s much more to be seen.

I move on to the set of a sailing ship which brought emigrants to new lands in 1854. (In the 19th century 90% of emigrants departed from Bremerhaven to the U.S. and 70% of those arrived in New York.) Through audio stories I learn how incredibly difficult the journey was with much illness and death due to sanitation issues (and I get upset when someone pees on the toilet seat). I move through sets showing the advances in emigration ships including Ocean Steamers and Ocean Liners. The sets are pretty amazing at making me feel as if I’m really on board these ships.

Once I “arrive” in the U.S. I enter Ellis Island and sit in a replica holding cage where

immigrants to the U.S. were held until processed. I learn 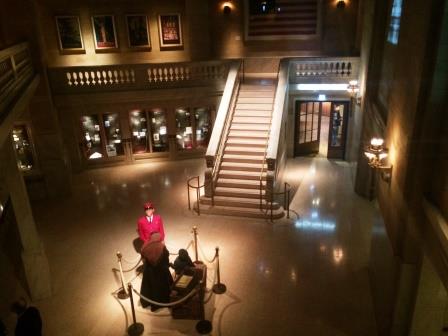 more about the physical questionnaires and tests they had to complete, as well as the financial and sponsorship information needed in order to be approved for immigrant status. Before long, I enter Grand Central Station (this one’s a little cleaner than the real one, though I think I see a mannequin peeing in the corner) and walk down the stairs into shops from the mid-twentieth century.

During my walk through the second half of the museum I learn how my Turkish immigrant Şerife Seyitler came to be in Germany, read about her family and view some family photos. It’s interesting to note that, if you came from German emigrants or your family immigrated to Germany, you can donate your family heirlooms to be on display at the German Emigration Center.

I spend four hours at the German Emigration Center but, in all honesty, I could have spent the entire day. If you go to Bremen or Bremerhaven, you should, without question come here. It’s one of the best museums I’ve been to (and I’ve been to a lot of museums around the world).

As this morning’s rain has stopped but what feels like hurricane force winds have arrived, I decide that today is an indoor kind of day and, as Bremerhaven has a great concentration of museums at its harbor area, I decide to head next door to the Klimahaus Bremerhaven 8⁰ Ost (aka, Climate House 8⁰ East). Germany in general is very informed about climate change and committed to recycling. Great examples I’ve seen are the many bicycles used for transportation, the solar panels installed above some of the bicycle parking areas (now, if only there were sun), the trash/recycling separation in public areas, as well as the intense residential recycling program (which stressed me out in Berlin as there are about six-different recycling groups). Here in Bremerhaven, they have a whole museum dedicated to the earth’s climate (also, some great examples of daily life around the world).

to get lost nearly as much as I do.) In the museum, I “travel to” nine different locations around the globe and learn a bit about the people, the culture and the climate. I also learn about what is being done to protect the environment there. I walk from Switzerland to Niger to Antarctica to Germany, with stops in between (heck, this is much faster than the train from Hamburg to Bremen) all the time wondering if I’ll be sick tomorrow from the massive temperature and humidity changes. There are a lot of hands-on things and it would be a great place to take kids. Unfortunately, I only have time to do the basic journey before the museum closes (think of it as the bullet train versus the steam engine) and I hop back on the German rail back to Bremen.

****Only a few more days to vote on the next Drop Me Anywhere location. Where will I go? You decided! Vote Here!

Walking Through History Bremen – A City of Traditions, Fables and History