It’s raining. . . again, or perhaps still. I’ve lost track. I’ve come to accept that the most important item you can pack in your suitcase when you come to Germany in the winter is your umbrella. If you try to “let a smile be your umbrella,” you’re sure to get wet. Still, I have plans which include a walking tour of Bremen (walking in the rain) as well as a volunteer activity which will not only fulfill my commitment to include volunteer opportunities and information from around the world in this project, (visit Rebel-With-A-Cause.org), but will get me indoors.

I head out to check-out Bremen as, after my late arrival due to massive train delays, and a day spent in Bremerhaven yesterday, I’ve been here two nights and haven’t yet explored my neighborhood. I step out of the hostel and start walking in the direction of the old city center. Bremen is much different from towns like Rostock and Lübeck. While it still holds historic charm, its river makes it an important location for trade routes. Due to its geographical importance, over sixty-percent of it was destroyed by bombing during WWII. Many old buildings were rebuilt in their original style, but there are also many new buildings. It’s an eclectic mix of both architecture and people.

After a hearty buffet breakfast I enter the large city square to the sound of guitars. It feels a bit magical. I walk across cobblestones into alleyways extending from the main square. Museums abound, as do restaurants and shops. One could wander for hours, but I have a walking tour to take. I’m turned around and can’t seem to find the visitor’s information center I’m looking for. I pop into a hotel and ask, and the man at the counter looks up the location on the computer and points me in the direction. Unfortunately, it’s the wrong direction. Really, I followed his directions very closely and he said it was a two-minute walk. Back in the square I stop a lady and ask, “Sprechen zie Englisch?”

“Nein,” she answers. “Habla Espaňol?” she shoots back.

“Si, si!” I say excitedly. “Hablo un pocito Espaňol.” Well, a hell of a lot more than my German.

And with her directions, I find the place. Unfortunately, due to the delay my guide has already left. The lady at the visitor’s center calls the guide who is close by and waits for me in the square by the statue. I make a hasty exit into the square and see two men by a statue, one waving his arm. I apologize for my tardiness and meet Gerd, my guide and Adam, an English guy who has come to Berlin from London for just one night. 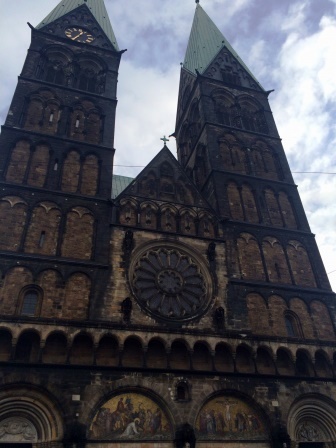 Gerd begins showing us some of the Bremen highlights

which include St. Peter’s Cathedral, a Protestant church – most here are – built beginning in the 8th century (beginning, because it takes quite a while to build these amazing places; it’s not tract housing for goodness sakes). Its Gothic architecture is impressive with high-ceilings and a baptismal font which dates back to 1229 and is still in use today. While the cathedral was damaged during WWII bombings, it was not destroyed as the twin spires which reach high-into the sky were used by the allies to zone in on their target city.

As we leave, Gerd tells us about a German tradition which takes place in front of St. Peter’s. When a man turns thirty, if he’s unmarried, he and his friends gather at the steps of the cathedral and they party while he sweeps the steps. He’s supposed to continue doing this until a virgin passes by and he can kiss her. (Something tells me he’s going to be sweeping for a while.) If a woman turns thirty and is unmarried, she must polish the cathedral’s doors. (Perhaps this is where the thirty-year old man will meet his virgin. Sort of a strange dating service.) 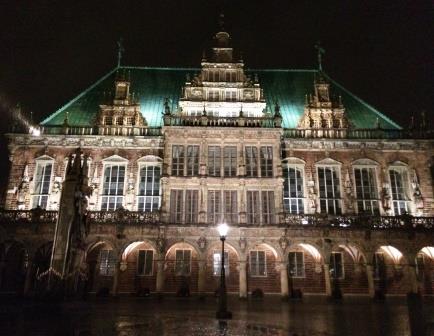 We view the beautiful architecture of the Bremen City Hall which, in 2004, was named a UNESCO World Heritage. On the bottom floor we find the famous Bremer Ratskeller which houses the largest collection of German wines in the world. Rumored to have over 1,000 different bottles of German wine, you can bet I’ll be coming back here and tell you more about it then.

Soon we come across the statue of the “Town Musicians of Bremen” which honors the story of the same name by the Brothers Grimm. Legend has it that if you stand in front of the statue and place both hands on the donkey’s hooves and make a wish, it will come true. I step up, grab the donkey’s hooves and, as the statue is made from metal and it’s 42 degrees outside, I immediately wish I were wearing my gloves (crap, just wasted my wish). 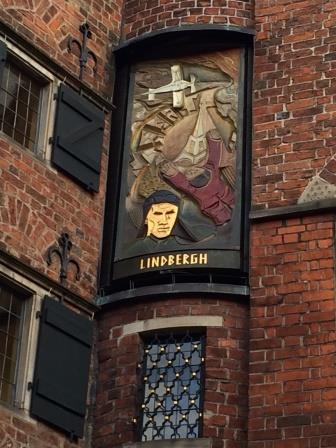 We stroll down the tiny Böttcherstraße (it’s 330 feet long), with its unique architecture, cafes, museums and the Glockenspiel, a clock on the side of a building which rings real porcelain bells from high up on the roof at specific times. When this happens, a series of large wooden panels turns to display well-known ocean and trans-Atlantic explorers and adventurers.

We move on to the Schnoor Quarter. As we walk past, Gerd points out the Birgitten convent which rents out rooms for accommodations. What? I could have stayed with the nuns? Knowing this, I later visit their website and see that they have twelve rooms and serve meals. I decide that I’ll stay in Bremen longer if it means I can crash at the nuns’ place. I write them requesting a quote for a room and they never get back with me. What? No room at the inn? Um, have you learned nothing? 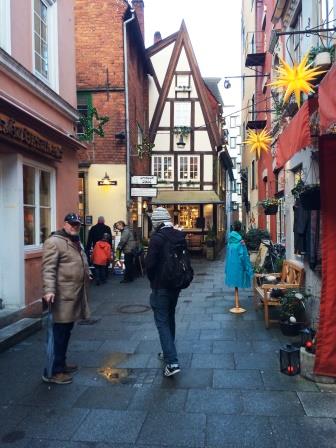 The thin cobblestone alleyways of the Schnoor hold quaint shops and restaurants (yes, many tourist shops also, but somehow, in this setting they’re also quaint). It’s colorful and feels like it was modeled after a gingerbread village. I make a note to return here. We finish the tour at the waterfront where Gerd tells us all about the importance of Bremen in the trading routes and the Hanseatic roots.

We say goodbye to Adam, and Gerd takes me to pick-up my umbrella which I left when we stopped for a beer (oh yeh, we stopped for a beer). Gerd and I decide that, since neither of us has to be anyplace, we should stop and drink wine. We head over to the Bremer Ratskeller to make a crack in those 1,000

bottles. It turns out, this place also survived WWII intact and was used as the American Officers’ Club after the invasion. The Ratskeller was built over 600 years ago and houses the oldest wine barrel – from 1653 – in Germany. Its famous visitors include Johannes Brahms, Otto von Bismarck, Richard Strauss, Richard Wagner and Kaiser Wilhelm I and II. Oh and me! Gerd and I drink many glasses of wine while discussing history and politics. After a great day and evening, I head back to the hostel.

Today I wake up, enjoy a nice meal in the Schnoor district and wander through the shops, stepping through tiny alleyways and between raindrops (yup, it’s raining again). After I buy my customary magnet (a tradition of easier to carry souvenirs I’ve started) I head over to the Bremer Geschichtenhaus, also in the Schnoor

district. It’s a living history museum where local Bremen historical characters come alive through performances by volunteers and people staffed through a jobless and homeless agency. I spend some time speaking with Sara and Mick, the owners of the place as well as Christopher, one of the few fully-paid employees, and Herman and Silke, two people who have been helped by the program and work as performers at the museum. They share their personal stories with me and tell me how the museum has taught them new skills and boosted their self-esteem. I also get to see part of the shows as visitors walk from set-to-set hearing the stories of famous Bremen locals. There’s laughter and interaction between the performers and the visitors. Silke is kind enough to translate the stories and I’m sure they’re funny, but I’d have to come on a Friday to understand as that’s when the scenes are performed in English. It’s a fascinating place that you can read more about on Rebel-With-A-Cause.org.

I bid them gute nacht and head out into the rain (dear God, I’m glad there are lots of boats around as I might need one soon).

Tomorrow – A bicycle tour or Münster, a city of peace.

***Voting for the next DMA trips ends tomorrow! VOTE HERE!

Emigration, Immigration and Climatization I Want to Ride My Bicycle