Today I wake up in Münster, Germany. I didn’t sleep all that well as the fierce thunderstorm and flood of water sloshing down the balcony drain woke me. I’m told that winter thunderstorms are a rarity here. I’m also told they’ve had three so far this winter.

The hotel is nice. I’m staying at the StadtHotel Münster and, while my room doesn’t have a bathtub, there’s a sort of timer thingy on the bathroom wall that I’ve come to find out is a floor warmer; this might just be the best random hotel amenity ever. After I checked in, I wandered up to the fourth floor to check out the sauna and fitness center. The sauna looks nice but it’s less sauna-like and more, well, let’s just say my bathroom floor is hotter than this sauna. It turns out that, if you want to use it before 6:00pm you should let the front desk know and they’ll turn it on for you. I open the door to the fitness center and, sorry to say, an exercise bike and an elliptical trainer do not a fitness center make. Still, the hotel feels. . . comfortable.

So, after a stormy night’s sleep, I head down to the restaurant for the included breakfast which is pretty darned good. (Is that champagne I see near the juice? Why yes, I’ll have some of that.). I eat enough to wish I’d gone to the “fitness center.” No worries as today will be active enough. At 10:00am I meet Annette my bike tour guide in the lobby of the hotel. While the StadtHotel may lack a proper fitness center, who needs one when they’ll rent you a bike for €10 a day? (If you want to say you went biking but don’t really want to work that hard, they’ll rent you an electric bike for €25. I won’t tell.)

Münster is the bicycle capital of Germany with 500,000-600,000 bikes in a city of approximately 300,000 people. Yup, most people have at least two bikes. (Thinking they might have a bumper sticker with a twist on the classic one saying, “My other bike is a unicycle.”) It’s a bright, sunny morning (can you believe it?) and Annette and I set out to explore Münster on two-wheels. We begin by riding along the Promenade, a lime-tree lined greenbelt which wraps around the old town along where the old city wall used to stand. At peak times you’ll find 1,000 bikes per hour riding past. Biking is not just a leisure activity in Münster, it’s a primary mode of transportation and you must follow the rules of the road as if you were driving – turn signals (use your arms), merging, etc. And pedestrians don’t have the right of way over bikes so don’t think you can just run in front of that oncoming bike and he’ll stop. He’s more likely to run you down and then yell at

you. And for god sakes, don’t walk on the bike path as that would be tantamount to walking in the middle of the freeway.

Our first stop is a look inside the baroque style St. Clemens’ Church. It’s unusual to see as most old churches in northern Germany tend to be Gothic and, in comparison, the inside of this one looks like it got all dressed up in its favorite party dress. It’s colorful and ornate and was painstakingly restored after WWII based on the original artist’s designs.

We ride on to stop at the Town Hall which contains the Hall of Peace. It was in this

room that, in 1648, that the Spanish and Dutch signed the Treaty of Münster, which formed part of the Treaty of Westphalia which ended the Thirty Years War (it was a big deal). In order to protect the beautiful, wood paneling and the portraits of the men who participated in the negotiations, the decorative insides were removed during WWII. When this was done, a small shoe was discovered inside the walls. The origin of it remains a mystery as does the origin of a hand (yes, a real hand!) which was found under the floor after the building was bombed – it was damaged, but not destroyed. Now, both the shoe and the hand are on display (a manicure would go a long way). 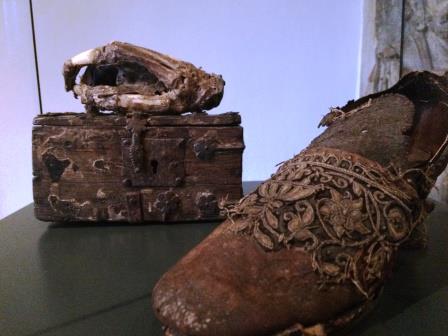 We step outside and admire the sculpture in front of the Town Hall, “Tolerance Through Dialogue” by artist Eduardo Chillida, which has become a memorial for the victims of the Charlie Hebdo shooting, along with victims of the other recent shootings in Paris. It’s touching to see in this city that has a history or standing up to violent extremism and trying to find peaceful solutions (read about Bishop Clemens August von Galen standing up to the Nazi’s).

We move on to the 13th century St. Paul’s Cathedral and a crazy, fun astronomical clock. I’ve seen a couple of these on my trip through Germany but this one is different. At 12:00 noon every day (12:30 on Sundays) the clock chimes. But it’s not just a normal bong, if you were to bring a snack, you’d have a dinner show. It begins with two little bronze guys in the upper right-hand corner ringing a bell. After a few chimes, the couple in the upper left hand corner answer with a bell of their own. Consider these two the opening act. Now we come to the headliner. That’s right, ladies and gentlemen, standing center stage, for your listening pleasure we have Mary holding the baby Jesus. While music plays on the bells, the three wise men enter – accompanied by two servants – and circle the baby Jesus while bowing down to him. It’s truly amazing when you think that this clock dates back to the 1500’s. And it’s a bit scary when you think that, as it’s an astronomical clock, it has a calendar and that ends in the year 2071 (it’s the Mayan calendar fiasco all over again). When we exit, the sun has disappeared and, once again, the rain is falling. 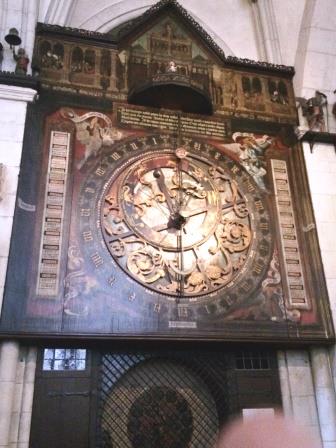 We then make a stop at the beautiful St. Lamberti’s Church where Annette tells me about the incredible events that happened here and where tonight, I’ll get a chance to experience history up close and personal. Stay tuned. Anne and I then head out into the rain for the short ride back to the hotel. A bike tour in Münster is a must! 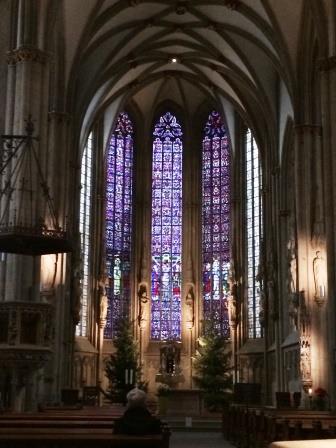 I spend much of the day working and then wander out to have dinner at the famous Pinkus Müller Altbier Brewery. Altbier is a Westphalian brew which used to be produced out of 150 Altbier breweries in Münster and Pinkus Müller is now the only one left. I enjoy a nice dinner of herring (oh so local of me) and try a few varieties of Pinkus Müller brew – for €1 you can get a small glass to sample so you can try various beers (it’s a German beer flight, not to be confused with a Lufthansa flight).

Tomorrow I’ll tell you about one of the most amazing experiences I’ve had in my many years of travel. We’ll meet the Tuermerin von Münster and discover the incredible history of a Münster landmark as told through the eyes of a groundbreaking woman. First, be sure to tune in for an announcement tonight (or perhaps later in the day depending on your time zone). Where will DMA head to next? The voting is nearly closed.

**Thanks to the StadtHotel and Münster Marketing for sponsorship. As always, all opinions are an honest representation of the value at normal price and no positive reviews or comments are offered in exchange for courtesies.

Bremen – A City of Traditions, Fables and History Hungary for Love