After a tasty dinner at the brewery, I walk over to St. Lamberti’s Church. Built between 1375-1450 (with another originally in the same spot prior to this), The history of this church, is like no other. In 1534 the city of Münster was seized by radical Anabaptists who expelled Prince-Bishop Franz von Waldeck. The Anabaptists were radicals who preached adult baptism (as well as polygamy) and they told everybody that the world was ending and only those in the city of Münster who were baptized a second time would survive. When the world didn’t end, people began to question, but enough still believed in them to quiet down the masses. Things were bad with starvation and violence, and the three leaders, Herinrich Krechting, Bernd Knipperdolling, and Jan Bockelson had control of the town. Eventually, in 1535, the Prince-Bishop was able to retake the town with the help of his own army. While the Herinrich Krechting escaped Knipperdolling, Bockelson and Bernd Krechting (Herinrich’s brother) were captured.

The Prince-Bishop tortured the two Anabaptist leaders, and the brother of the third (wow, that’s some guilt by association) before executing them in the marketplace. Their bodies were exhibited in cages which hung from the steeple of St. Lamberti’s. The birds picked at them and they served as an example of what would happen if anyone tried this kind of foolishness again. The really spooky thing is that the cages are still hanging there in full view of the city! 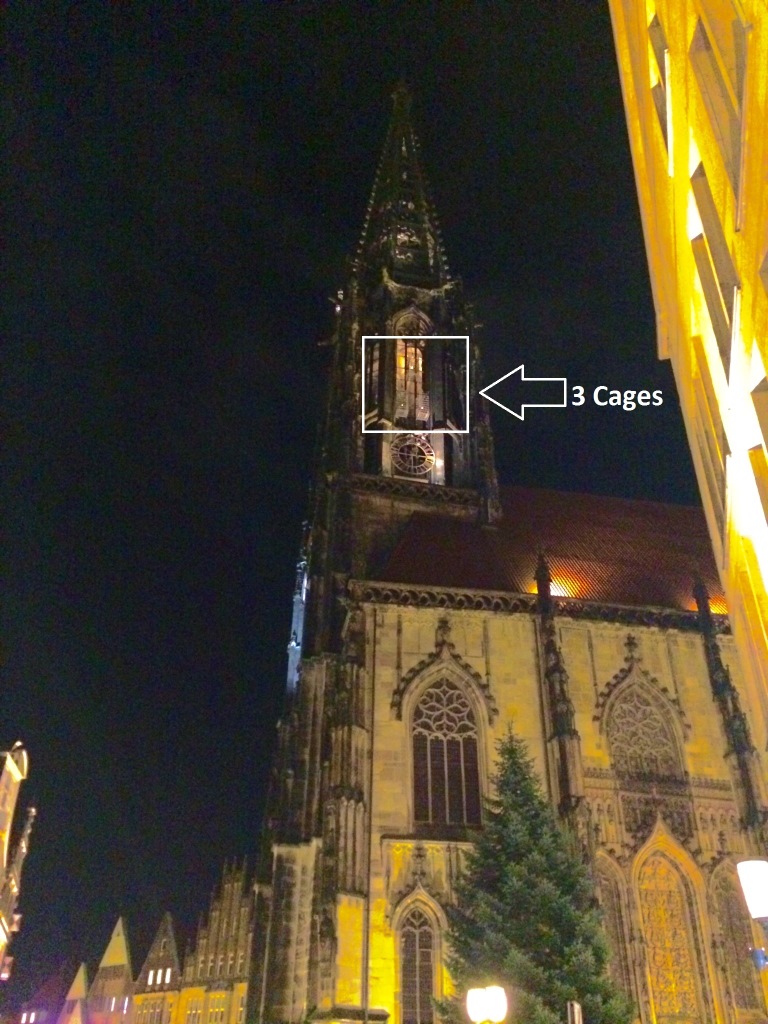 Tonight, I’ve been invited up to visit the tuermerin von Münster – the tower keeper of Münster. We meet on the dark street in front of the church, far below the menacing cages which held the dead bodies of the three Anabaptists. Her name is Martje – “call me Mary,” she says – and she’s originally from Norway, though 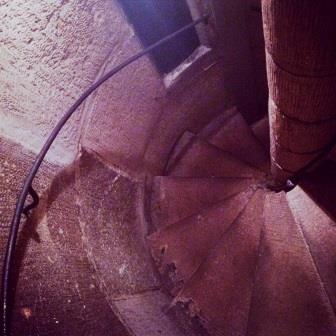 she’s lived all over the world. She’s thirty-four years-old and surprisingly pretty for a tower keeper (perhaps I expected the Hunchback of Notre Dame). She says we must begin our climb up so we’re not late. We enter through a heavy wooden door into a cold, dark entryway. She flips on the light switch (darn, I was hoping we’d carry torches) and we begin heading up the circular, stone staircase. Remember my disappointment with the hotel “fitness center?” I’ve just done a bike tour and am now about to climb 300 steps (75 meters/246 feet) up into the tower. I’m good.

myself outside standing in front of a large church bell. Unlike other towers across Germany, this doesn’t belong to the church, but to the city – similar to the tower keeper, as she works for the city and not the church. The bell is called the Rats- und Brandglocke, the Council and Fire Alarm Bell, and it’s Martje’s responsibility to ring it once every six years to announce the election of the new Oberbürgermeister (a word even the Germans think is fun to say), or Lord Mayor. Martje seems a bit nervous for that day to come (she’s only worked here a year) when she says, “I’m not allowed to practice.”

We turn around and lo-and-behold, hanging off the outside of the building I see three cages. As these are the actual cages which held the dead Anabaptists, I peek inside over the edge of the tower and into the cages to see if there are any bones or rotting skin (don’t judge me, you would do the same). Before long Martje tells me that we must go as she needs to reach the top to call the fire department to let them know she’s present in the tower and all is well. As we’re running a bit behind, she uses that ancient technology of her personal cellphone to call them. 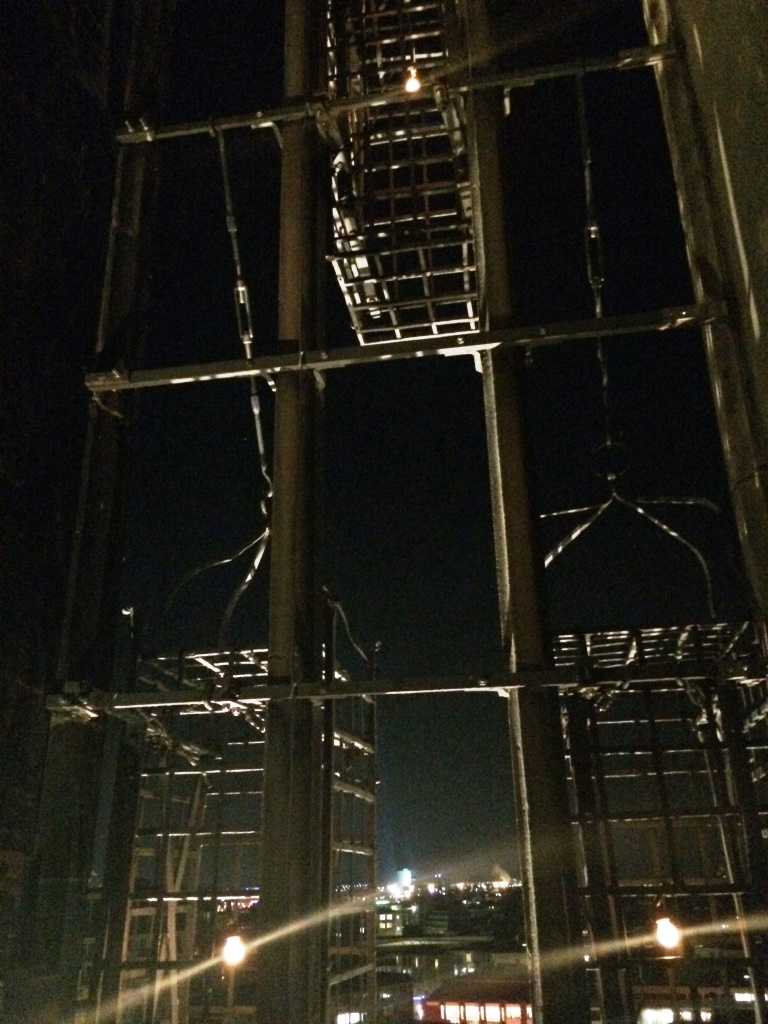 We head back in and climb the last hundred steps to the top where the tower keeper’s office is located. It’s furnished with basic furniture – a small desk (no idea how they got it up here), a bookshelf and a couple of chairs. There are also a few creature comforts including a small space heater and a toilet. Nope, there’s no plumbing; this is one of the sit on the adult-sized, kiddie toilet and empty it by hand kinds. It was only brought up a year ago so. Prior to that, the tower keeper either had to run down three-hundred steps, find a nearby restaurant to use their restroom, and climb back up three-hundred steps, or just hold it.

As we talk, we hear church bells chime the 9:00 hour. Martje dons her official 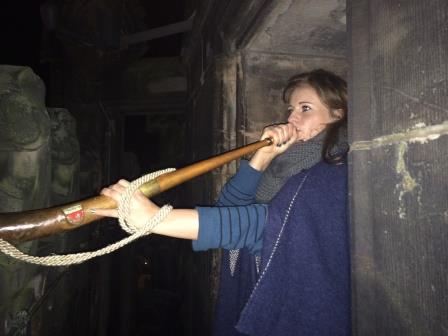 tower keeper wool cape, grabs her horn, and we step outside. The lights of the city glow all around us. This is the 2nd tallest building in Münster, only shorter than the tower of Herz-Jesu-Kirche (Heart of Jesus-parish church) by five meters. The platform is narrow but sturdy as it’s built into the intricate decoration of the tower and even survived a bombing in WWII; there was a big hole blown in the tower but it remained standing. She steps around to an inlet, looks over the side, says, “No foes, no fires,” and blows her horn three times, pauses and blows another three, and blows one more set to finish out the serenade. This signifies that it’s 9:00 and all is well. There’s actually a code and if you’d like to know more about it, you should check out the tower keeper’s blog (was WordPress around in the 1300’s?) “The Art of Tooting.” Martje repeats the sequence on three sides of the tower before we head in to get warm.

We have a seat and I have a chance to ask her questions over tea.

“Why do you only blow the horn on three sides and not on the east side?” I ask.

“Well, there are rumors and superstitions,” she tells me. One theory is that there may have been a cemetery on the east side. Poet Johann Wolfgang von Goethe wrote the poem, Totentanz (“Dance Macabre”) and, as he wrote a few things about tower keepers, and his statue is among one of the many in St. Lamberti’s, well, why tempt the fates?

She tells me of another theory that, perhaps, some rich guy lived on the east side and didn’t want to be disturbed. Heck those rumors abound today about some current residents (um, it’s not like they just built an airport runway next to a house you’ve owned here for years. This place has been around for like a thousand years. You need to get over yourself).

One last theory is my favorite; “The altars of Christian churches are oriented to the east. When Jesus Christ arises from the death, he will come to us from the east. And the tooting might scare him off…” Hmmm, I have a feeling Jesus could handle a little horn-blowing.

“Do you feel like you part of history?” I ask next.

“You know, I didn’t really at first, but after a year of working here, I really do. I love reading history” – Martje was a history major as well as a musician traveling in Renaissance Festivals – “and I now feel as if I’m a part of it.”

“What about being a woman? You’re the first female tower keeper, correct?”

“Well, the first one here at St. Lamberti’s,” she answers. “There are some others. One lives in her tower and has a Jacuzzi!”

“Um, well you have a little toilet thingy.”

Moving on, I ask her if she ever gets to Bremen to visit her mother.

“No, not really, as I work in the tower six-nights a week (8:30pm-12:30am) and then also work with Münster Marketing doing various duties and speaking to groups about St. Lamberti’s, the tower, and the tower keeper’s job.”

“Doesn’t working six-nights make a dent in your social life?”

“Some people here in Münster stay up late and go out, but I really just like to go home. I wake up early and enjoy being with my friends in the daytime.”

Between listening to Martje and being told about the tower keeper who lives in her tower, I begin to understand that this is more than a job, it’s a passion. These tower keepers really feel a part of history and a responsibility to represent it well.

“So you work six-nights per week. Who watches over the city during your night off?” I ask.

“I’m off on Tuesdays so, I guess we need to hope for no fires and no invasions on Tuesdays,” she answers with a smile.

Far too soon my time in the tower is over and I thank Martje for the tour and the tea. I begin my descent down the three-hundred steps alone. While going down is much easier, it’s also a bit spooky doing it alone. I hold onto the metal railing tightly with one hand as I rub the other along the wall on the side, literally feeling the history.

This was truly one of my top-ten travel experiences and I give a big thanks to Münster Marketing and the Martje, the Tümerin von Münster. Sorry to say that this is not an experience open to the public and is offered only to journalists/writers (so don’t even ask). This is why it’s good to be my Virtual Travel Buddy. Still, if you come to Münster, you should definitely come to St. Lamberti’s Church and, at night, listen out for the tooting of the tower keeper’s horn to assure you that, in Münster, there are no fires and no foes.

Hungary for Love Budapest or Bust