Ruins Are in the Eye of the Beholder

This morning I spend some quality time working. I know what you’re thinking, “Don’t you just go where we tell you, drink every country’s version of mulled wine and get lost a lot?”

Well, yes, but there’s a bit more to it than that, and that’s a bit of the boring stuff so why spend too much time talking about it. Suffice to say, there’s my writing for examiner.com as well as corporate clients. And, here and there I receive interview requests as people seem to find this project a bit unique and I truly appreciate their interests. And writing and arranging speeches and lectures. Then there’s finding the volunteer project once I’ve arrived as well as longer term accommodations. Oh, and as I tell you in “The Good, the Bad, and the Thank You’s” how much the trip cost (as well as telling my accountant, there’s the accounting part. Crap, we’re getting into the boring parts so, if you have any questions about those parts you can comment below or use the contact link for a private conversation.

At around 1:30, I finally get out of the hotel room. I’ve yet to eat, and more importantly, yet to have coffee. I walk over to the Jewish Quarter as I’ve heard much about it and, being Jewish, I’m always interested in these areas in foreign lands. Also, I’ve found an apartment for rent in the quarter through an online search. I’ve found out that Budapest has many short-term and long-term apartment rentals and it’s a very common accommodation choice for visitors. After a fifteen-minute walk, I locate the building. Unfortunately, when I ring the bell of the apartment house, nobody answers. After a few minutes, I walk into the tiny coffee shop next door and ask if they know anything about the apartments. The cute, but little English-speaking waitress, seems to know nothing about them. I ask to see the menu and, though it’s tiny without many options, coffee is one of the options, so I start there.

Before long, a man, the only other person there besides the waitress, asks to pay his check. He hands the waitress a larger bill – I believe it was Ft20,000. All things are relative as Ft100 equals approximately $0.36 – and she says she can’t make change.

“Do you take credit cards?” he asks.

Understandably, nobody has a great solution. She finally explains that, in a few minutes, her boss will arrive and can then run down the street to get some change. Patience is a virtue when traveling and this gentleman understands that. He orders another coffee and, as he clearly speaks English, I ask him if he lives here. He tells me he does so I ask if he knows anything about the apartment next door. He doesn’t, but says that he lives in the area and really likes the energy. I invite him to sit with me while he waits for his change.

His name is George (pronounce Yorgay) and he’s from Georgia (the former Soviet one, not the one the lights went out in). He works for the United Nations with the High Commission for Refugees. He’s spent time in Africa, Syria and other locations helping refugees, well, stay alive. He has my dream job (well that, and being on the Publisher’s Clearing House Prize Patrol). We chat about refugees, politics and a variety of world topics. He tells me he’s lived in Budapest for a year. He came here as he needed a break from the emotional stress that his job in the field held. I can only imagine. In Budapest, he works mainly on the legal and diplomatic issues involving refugees. He says that he knows that he’ll get bored soon sometime and will then go back in the field but, for now, the break is good.

What was supposed to be a quick coffee has turned into a nearly two-hour, incredibly interesting conversation. We finally say goodbye after he points me in the direction of the Dohány Street Synagogue and tells me there are restaurants around.

I arrive at the synagogue to find out it closes in forty-five minutes. While it’s not really enough to see all parts of it including the garden and the Jewish Museum, I decide to pay the minimal fee and see what I can, and I can always come back and see the rest. The Dohány Street Synagogue is world-famous for its size, beauty and history. Built between 1854 and 1859 it was the first purpose-built temple to be built for the Pest Jewish community. At the time of its inauguration, it was the largest Jewish place of worship in the world. 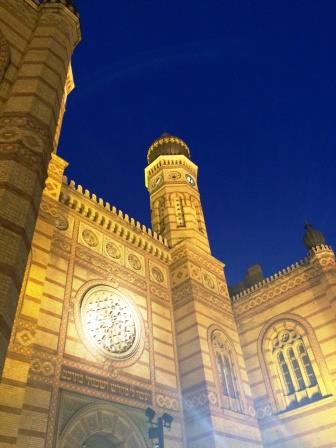 As I walk in, I’m in awe of the beauty. Bold colors decorate it with intricate wood carvings throughout. Just as I do in all places of worship which I visit around the world, I sit in peace for a few minutes and take it all in. I see a tour group there and make plans to return for a tour of the Jewish Quarter which includes the synagogue. As I’ll be returning here for a proper visit and tour, I’ll leave the description for another article as I want to be sure I have all of the correct information to share. But the beauty is undeniable. 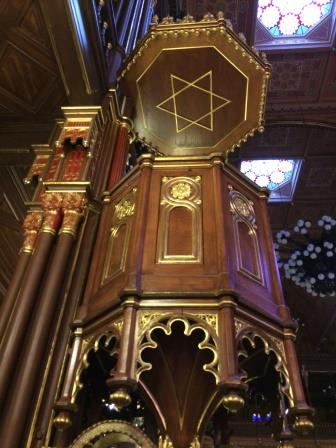 I stop in the Jewish Museum, knowing that it closes in ten-minutes and I’ll have to return another day. As I enter the museum, I hear a family speaking English. I ask where they’re from and they tell me Michigan. As any born and bred Michigander will do, I point to a spot on my hand and say, “I’m from here!”

We chat for a minute and she tells me she’s a retired teacher from Oak Park High School. She began teaching there the year before I graduated from there. This is truly a small-world moment and it’s nice to have a little connection to home. As the museum is now closing, we say goodbye and wish each other safe travels.

I step out and head across the street to the Blue Rose Restaurant which, while not a traditional Jewish delicatessen, I’ve heard has excellent matzoh ball soup.

Afterwards, I wander aimlessly around the Jewish Quarter, finding some interesting bars and restaurants, as well some apartments to check out. I ask a lady at the front desk of one about the famous “Ruin Pubs’ which I’ve heard about.

“Yes, she says, there’s one just a few blocks away. You can’t miss it,” she tells me. “It looks like, well a really ruined building.”

Within a few minutes, I’ve entered Szimpla, one of the famous Ruin Pubs. Ruin Pubs are located in formerly abandoned buildings which tend to be large spaces with courtyards, and little has been done to fix them up. The ruin is the charm (remember when we went to the ruins of the ancient civilizations in Mexico? This is nothing like that).

As I enter, I hear some people saying goodbye to each other in English. I say hello to the one man left and tell him I noticed they were speaking English and ask where he’s from. Very loudly, he says, “Norway! I’m Santa Claus!” (Um, I think Santa’s been hitting the eggnog). He offers to buy me a drink which is okay by me. We head over to the bar, order our drinks and see a woman sitting alone by the heat lamp. She has two extra seats and invites us to sit down. Her name is Dil and she’s a student from England here for the weekend. We’re both in awe of the place as there’s so much to take in. There’s John Denver music playing accompanied by quirky videos on large screens, A Shisha (or Hookah) bar area where you can order up your favorite flavor to smoke from a water-pipe, Turkish toilets upstairs (otherwise known as Squatty Potties), an open courtyard, an abandoned car with a table where you can sit and enjoy your drinks or shisha, and so much more. Oh, and at some point, the waitress comes around and offers carrots which you can purchase for a small fee, just because. 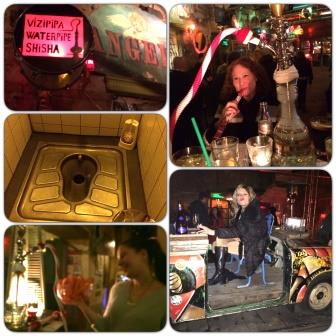 The Norwegian, whom we’ve nicknamed, “The Viking” has become way drunk and extremely irritating. He’s shown us photos of his wife, gotten too touchy-feely and insisted that I will be leaving with him (this is definitely not the “love” you sent me here for). We’ve sent him away, telling him that we’re having girl-talk and he shouldn’t come back for at least an hour. We’ve given away his chair and taken his drink to the bar. He keeps returning and putting his arm around me. I’ve pushed him away and told him he’s being rude. He’s putting the “pest” in Budapest. He’s putting the “Sheesh” in shisha. He’s putting, well, you get the idea.

Before long we meet Sylvia and Owen, a couple from Belgium. Actually, he’s from Ireland and she’s from Italy and they live in Belgium. We invite them to our table and have drinks with them for a while. Before long, the Viking returns and starts getting more irritating (didn’t think it was possible). We, in no uncertain terms, tell him to go away.

After some time, we watch security escort the Viking out of the bar with his arms locked behind him. Everybody in our area of the bar begins applauding. Yes, he put the “Boo” in Budapest (yeh, I’m done with that now)). Now we can enjoy the rest of the evening.

Tomorrow – Looking for the Prime Minister, meeting protestors and a cruise on the Danube.