This morning I catch a bus to Buda and check out the other side of the Danube as I’m thinking about renting a short-term apartment there. Everyone has told me it’s a good deal, especially as Buda is the ritzy side. I’ve taken the subway but not the bus yet so the ladies at the desk have instructed me that I should go down to the subway to pick up a ticket – or even ten as you can get 10 for Ft3,000 as opposed to 1 for Ft360 – as ticket machines are not always available at bus stops and you can’t pay the bus driver directly. In other words, failing to plan is planning to walk..

I step off the bus at the first stop once we cross the Danube. I’m hoping to grab a coffee and something to eat as I want to see what’s around the apartment anyway. I walk uphill a bit – it’s all uphill on this side – and I see few restaurants. The restaurants I do see are closed. I’m hungry and I need coffee and I’m getting irritated. I continue to walk towards the apartment and spot the street it’s on, or should I say stairs it’s on. The street is actually about five levels of beautiful stairs. The area feels a bit hoity-toity. It’s very clean with perfectly manicured parks and sidewalks. It’s lovely. Tour buses pass and stop to drop off people of various nationalities who have come to explore Castle Hill. I ask two people I pass if they live here.

“Do you know of any restaurants nearby which are open?” I ask.

“Well, there are some on Castle Hill, but they can be costly. You can go down and there’s a pub,” he tells me.

I just walked up; no way am I walking down. I continue with my climb, following the tour buses. I round the corner and see a small, outdoor market selling tourist items. I spot a restaurant around the corner. It’s self-serve which can be a money saver. But there’s a sign in the window advertising a “Tourist Menu.” To me, that means, we’ll serve you the same food we serve the locals (or maybe something you recognize, depending on the country), and then we’ll jack-up the price. Still, I’m hungry, so I head in and order some Goulash off the a la carte menu, not the Tourist Menu.

After lunch, I catch the bus back down the hill and across the river to the metro (subway) stop. While I took the newest line (M4) in from the train station, I’m now taking the yellow-line which is one of the older ones. In fact, Budapest has the oldest electrified underground railway system on the European continent, and the second-oldest in the world, predated only by the 1890 London one.

While the ancient subway is pretty cool, another thing Budapest is known for is its thermal baths; yes it’s spa day! I’m going to the Széchenyi Bath which is the oldest and largest one in Pest. It opened in 1913 and expanded to its current size in 1927. I enter through the large yellow lobby and am issued a “watch.” The watch opens your locker or, if you get a booth, which serves as a private changing room and locker (this is what I have), it tells you which one you’ve been assigned and opens that. Most things are a la carte here. Admission prices vary depending on the time and day you come, but average around Ft4,500 (US $16-$17). Lockers, towels and bathing caps are for rent, and you can buy various massages and even a bathing suit. 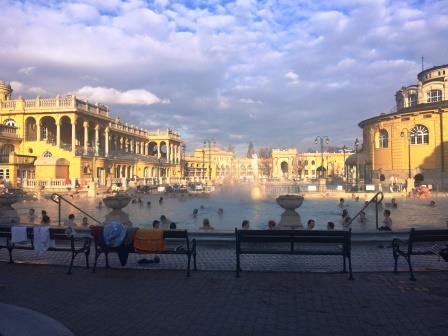 After I finish changing I step outside, literally outdoors. . . in wintertime. . . in Budapest. . . in my bathing suit (seriously Mexico, I miss you!) I enter the first pool I see because it’s got to be warmer than the cold air. I remove my water-shoes and step in the water. It’s warm. Not Jacuzzi-like warm, but comfortable. It’s one of the three huge outdoor pools which you would expect to see in photos from the 1930’s. There are people standing under waterspouts and waterfalls allowing them to massage shoulders, necks, backs and even heads. There are even men playing fierce games of chess. 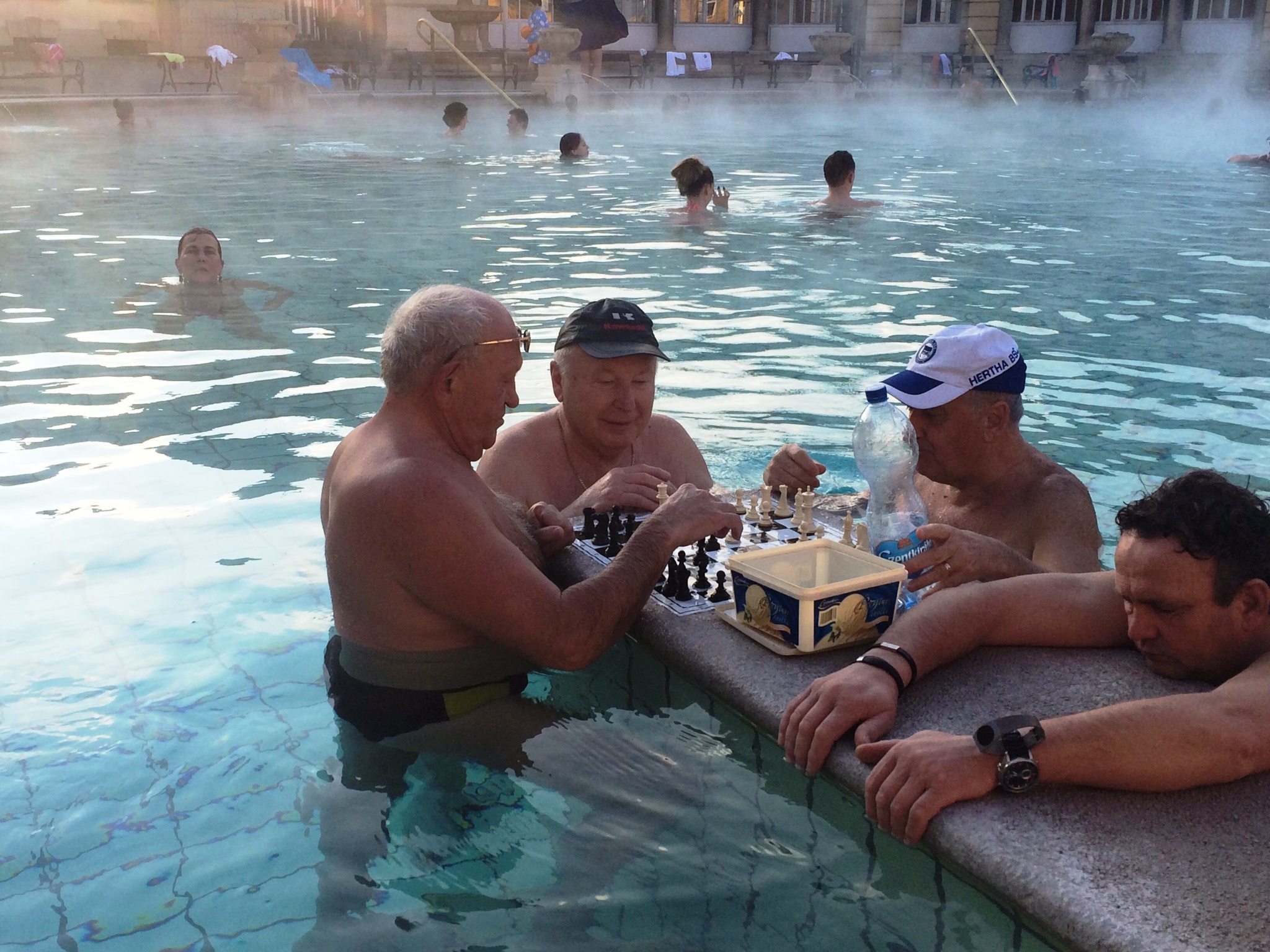 I’ve purposely come in the afternoon so I’ll be here for sunset as, when night falls, colored lights decorate the outdoor baths making them seem even more magical. I know this because I went to a thermal bath while staying over that extra time in Germany (I know, I didn’t mention it, but you’ll read about that in the book. I’m pretty sure Vladimir Putin floated by me at one point there). Since I’ve come later in the day, I decide to go inside as there are eighteen more pools there and I know that most of them close earlier. 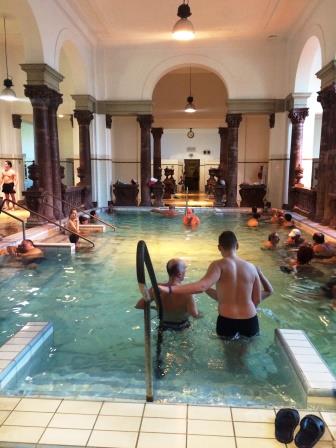 Inside the pools are much smaller. Some are as small as a jacuzzi, while others are as large as a two-bedroom apartment. One is much warmer than the outside one (think hot-tub) and a few run between cold and Oh my God, what were they thinking?! First lesson, dip your toes before entering. There’s one that has jets which start a whirlpool every once in a while (the round-and-round kind), and one used as a water exercise pool where you can join in a class every half-hour. The indoor pools are in a long hall running across the entire building. You walk from one to the next.

When I reach the end, I spot a couple of dry-saunas. I step in and sit down on my towel. There’s an older Hungarian man who seems to be hitting on two young women from I don’t know where. They’re speaking English and it’s kind of fun that I don’t think he realizes that I understand what he’s saying. He stands up and begins pacing and rubbing his sweat over his body. I close my eyes and pretend to relax (nobody wants to watch that). The ladies eventually leave “to go cool down” but sweaty Hungarian sticks around and continues to pace and rub his sweat. When I feel a drip on me, I know it’s time to leave.

I’m so hot when I head outside that I hardly even notice the cold air. I step into the end pool and see that they have the whirlpool jets going in one of the inner parts of this pool. I join in the current which picks me up and sends me whirling around in a circle. We bounce off of each other like bumper cars. Before long the current dies down and I head over to the area which seems to be bubbling. I’m hoping these bubbles rising provide a massage and it’s not just the gassy-folk area.

After a few minutes of a bubbly massage I hear English being spoken by the three people next to me. We begin talking and I find out they’re American teachers living in Istanbul. One is from Texas, one from Illinois and one from Michigan (really, did all of Michigan clear out and come to Budapest?). They’ve each lived in Istanbul for a few years teaching English. We chat about the schools, living in Istanbul (one of my favorite places in the world) and travel. I hear about a Sri Lanka trip which two of them did last year that makes me want to go. 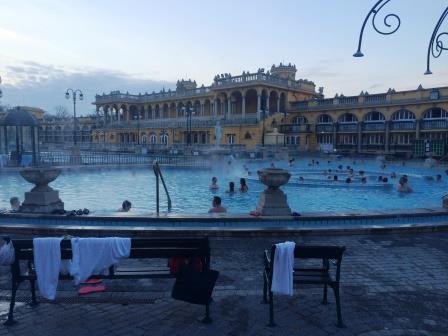 After some time, the sun has set and the lights are on. Greens and purples shimmer under the water. I can’t help but to compare the German thermal bath with this one. The German one was more spa-like, with quiet rooms containing lounge-chairs where you could sit by the fireplace and read, and indoor/outdoor connecting pools so you could just swim outside and not exit the water into the freezing air.

The Budapest thermal bath has history on its side. You feel the history when you walk in and, though it might not feel as luxurious, it reminded me of the three-hundred year old Hammam (Turkish bath) which I went to in Istanbul many years ago. And both the German and the Hungarian baths had large, old men wearing speedos who, perhaps, might have sneaked a peak in the mirror before stepping out of the locker room.

I Think I Love You Lost in a Tacky Tunnel