Lost in a Tacky Tunnel

I’m up today with a few changes. First, I’m happy to be alive. Okay, that’s not a huge change as I’ve been fairly satisfied with life lately (though a bit scared). But after the terrible flu I came down with the other night, happy to be anywhere but on my hotel bathroom floor would better describe my feelings. And speaking of my hotel bathroom floor, that’s another change; while the Museum Central Hotel served me well – they even made me toast after, once I could peel myself off the bathroom floor I ran down the street and bought bread and ginger ale – it was time to move on to a longer-term accommodation.

I’ve moved into the Jewish Quarter and am renting a small apartment from a guy named Adam. I have a kitchen, washing machine (no dryer as many just hang things to dry here), a bedroom and a balcony. It’s cozy and I’m sure the bathroom floor is just as comfortable as the hotel (dear God, I really hope not to find out).

This morning I visit the Hungarian National Museum. I figure it might be a good way to find out a bit more about the history of this place. As I step up to the ticket desk and pay my entrance fee, I ask about a map of the museum. The lady is apparently having a bad day (yeh, that’s it) and she grunts and points to a square brochure. I notice another pamphlet which looks like there are some special things happening in the coming days but, as it’s in Hungarian, I’m not sure what it’s about. I take a shot and ask Chuckles what’s going on. She grunts and tells me, with a sour look, it’s a symphony concert. Ooh, sounds interesting.

“And what about this one?” I ask. She looks as me lovingly (or maybe with disdain, it’s hard to tell) and tells me it’s also a concert. I take my cue that question and answer time is over and move on.

I drop my coat at the coat-check in the basement and take a few minutes to stroll through the temporary exhibit of ancient stone things. There are lots of tombstones from the thirteenth through seventeenth centuries and other stone archaeological items. I’m sure others might find this interesting; for me they’re really just rocks.

I move up to the ground floor which covers the time-period of ancient man. Honestly, I could be in any museum in the world as, sorry to generalize but, cavemen are all the same. It’s all about tools and clubs; oh wait, that’s modern man. Hmmm, maybe modern men haven’t progressed all that much. Still, I learn that those crazy early Hungarians buried their dead under the floor of their houses (kind of creepy). The museum also has skeletons in the floor under glass, lying as they were originally found which is kind of cool in a macabre way. 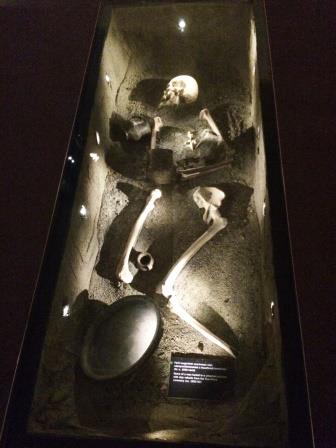 I climb up to the first floor to view the thirteenth through seventeenth centuries. This is the most interesting to me. I learn about invasions and border changes, kings and treaties, and queens and their jewelry (these ladies, and men, had some fine taste in accessories). Heck, I even find my knight in shining armor (well, the knight seems to have stepped out, but he left his shining armor so I’m sure he’ll be right back). 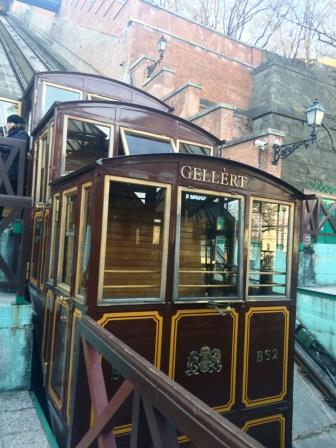 out some of Castle Hill. I take the number sixteen bus across the river where I exit at the first stop and cross the street to the funicular station. The Castle Hill Funicular, or Sikló, was built in 1870 to provide cheap transportation for clerks working on Castle Hill. While I could have continued on the bus to arrive at the top, or even walked to the top, this is a bit of an historical jaunt which I must take. The cars are wooden and have the shape of three Legos stuck together. It’s a short ride and I’m not sure who’s more excited; me or the six-year old sharing the car with me.

When I arrive at the top, it’s just in time to see the changing of the guard at Buda Castle. It takes place every hour on the hour and is worth seeing, if only because these Hungarian men look great in uniform. Also, their precision, gun twirling and trading, and the tradition is worth it.

I continue strolling down the street and eventually come to the Labyrinth of Buda Castle. Located 10-15 meters below the ground, the Labyrinth has been used as a jail, a torture chamber and a wine cellar (if I were jailed and tortured, I’d want wine). Inside, the Labyrinth tells two main stories; 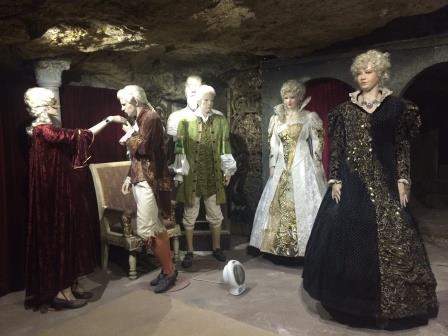 one is the story of Vlad the Impaler, aka Dracula, who was supposedly imprisoned here for one or ten years, depending on which sign you read inside the Labyrinth. The other story is The Masked Ball, a Verdi Opera. There are waxed figures representing the characters from the opera throughout the Labyrinth. It’s incredibly strange as it seems to have nothing to do with the Labyrinth. What’s even stranger is that the sign says the opera is based on the assassination of King Gustav III of Sweden in 1972 and it premiered in 1859. Perhaps Verdi was able to predict the future. Or maybe it was that King Gustav was actually killed in 1792. 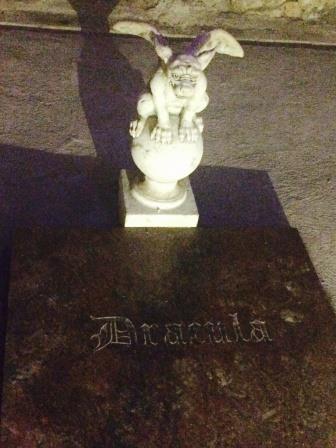 The Dracula part is better and only slightly less kitschy. The story told on the information plaques on the walls is interesting, but the tombstone is a bit much. Don’t tell anyone but, um, Vlad isn’t buried here. No rumor has it that he even died here.

Now I come to the labyrinth part; it’s a series of pitch-black corridors which seemingly alternate between leading in circles and nowhere. I find it both peaceful and fun. For the darkest parts, there’s a rail to hold onto so I’m irritated when people come towards me carrying flashlights to light their way. It’s like someone coming at you on a two-lane highway with their brights on. After a while, I come upon strange displays behind bars and lit by blue lights with smoky effects and spooky music in the background. 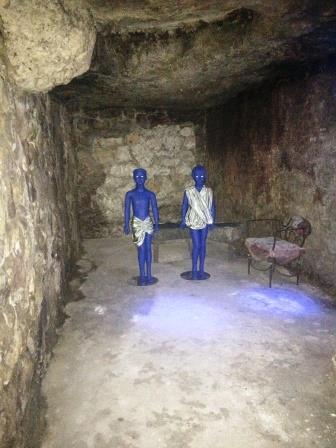 One is a small cement sarcophagus with a skeleton caught in a spider web looking out from behind. Another is two blue, alien-like boys which remind me of the twins from The Shining. The phrase Red Rum starts running through my head. Time to head out. When I finally make it towards the exit, there’s a section with posters of other caves around the world. Apparently they’re part of some International Cave Alliance or something.

I finally make it back into the sunlight and walk over to Fisherman’s Bastion, located on top of the old fortresses walls. Named after the Fisherman’s Guild because, according to customs in the middle ages, this guild was in charge of defending this part of the castle wall. But the name here is really just a matter of custom as it’s never had a defending function. Now, it’s also a tourist attraction as, in its seven towers, there are at least two bars and a gift-shop inside. 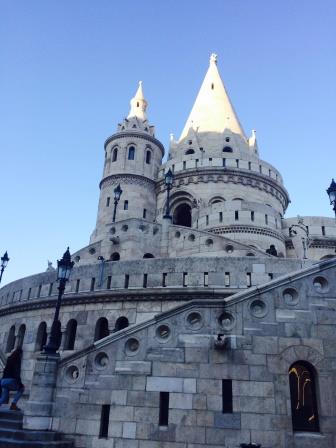 I enjoy the view, become the official photographer of all those couples taking selfies (note my disdain of selfies) and walk across the street to check out the Matthias Church. The outside of the building is beautiful, but

I know nothing about the place (part of the unplanned travel adventure – little to no research). I step across the street where tickets to see the inside are sold. As tickets cost Ft1,400, I’d like to know a bit more about the place to decide if it’s worth it. I ask the man at the ticket booth when the place was built, and if he can tell me a bit more about it. He kindly offers to sell me a guidebook for Ft1,000 (really getting tired of the tourist trap that seems to be Castle Hill). I politely decline and walk across to the church where the nice man at the entrance tells me that, this year, the church will celebrate its 1,000 anniversary. Okay, so it’s really old and, when I return to see more of Castle Hill in the coming days, I might just pay the Ft1,400 to see the inside of the really old church.

I decide to catch the bus back down from Castle Hill to cook some dinner in the apartment and go out and explore the evening in Pest. When I arrive at the bus stop, I begin chatting with a young lady also waiting. Her name is Emily and she’s here for the weekend. Originally from Hong Kong, she’s spending a year as an exchange student in Belgium and is taking advantage of traveling around Europe on weekends.

The bus soon arrives and we step on and take seats. We chat about what we’ve done here and what we want to do. I mention the Escape Rooms which I’ve heard about. These are places where you pay to be locked in a room and do your best to get out within the allotted time. As you need at least two people to participate in these, and we’re both traveling alone, we decide to go and visit one of these.

Tomorrow – The Great Escape and it’s time for our volunteer activity.