When I last left you, Emily and I were going to play an “Escape Game.” After an hour of searching, we finally locate Exit, the Escape Room (we weren’t that far; how will we ever find our way out of the escape room?).

E-Exit has two themed escape rooms; one a circus theme and one, the Orwellian 1984. As the Circus Room is already reserved, that leaves us with 1984. We’re asked to read a paper with our “situation” explained on it. We’re shown locks and how they work, and then Szilárd guides us in (he’s the cute Hungarian who works here and has explained how it all works). The door behind us locks and we find ourselves in a dimly lit room with various pieces of old soviet-era equipment which may, or may not, hold clues to help us in our escape. After fifteen-minutes Szilárd peeks in the door and shows us a main part of our clue. As we only have sixty-minutes to escape, we’re both appreciative and embarrassed for the help. We use the assistance to figure out the clue and escape from this room and enter the next.

After another approximately fifteen-minutes, we hear a scrambled voice through the loudspeaker. It’s Szilárd again and he’s either offering us another clue, or asking if we’d like fries with that (apparently the speaker system is also soviet-era). With his help, we find part of our next clue. After more searching, we hear the voice again. (I’m guessing he’s sitting back there watching us on his closed circuit television and thinking we’re idiots.) Clues are called out and we finally find all we need to escape this room and move onto the next.

I would tell you more about the clues in the escape room, except that would be cheating. Nope, you need to come and figure it out for yourself.

Emily and I decide to go have a quick bite to eat before saying goodbye and wishing each other fun and safe travels. I head back to the apartment as tomorrow’s a big day.

When I wake up I make myself breakfast (this is a treat for a perpetual traveler) and locate my destination on Google Maps. Today I’m heading over to Kisüzem, a restaurant which turns out is only about five blocks from my apartment. It’s also the meeting place of Heti Betevö, a non-profit organization, which serves the homeless and hungry population in District 7 of Budapest. I found them through a Facebook Budapest apartment locator site where I left a message asking if anyone had any info. on volunteer opportunities in Budapest. Someone sent me Heti Betevö’s link and invited me to come. See, it can be fairly easy to find opportunities to help in the world.

I arrive at Kisüzem just after noon and easily find the group, as they’re slicing bread, cleaning fruit and piling up hot food containers. I find some English speakers, introduce myself and tell them I want to help. I’m handed a towel and assigned apple wiping duties. As I clean and shine the apples, I have a chance to speak with some other volunteers. They tell me that the group started just over a year ago when Bandi, a cook at Kisüzem, began talking to some friends about the amount of food waste. They all agreed that something should be done with it to help those going hungry. This conversation happens a lot around the world, but these people actually decided to do something about it. Local restaurants joined in, as did many more people. In fact, throughout the next hours, many more people and much more food arrive. The energy is amazing. 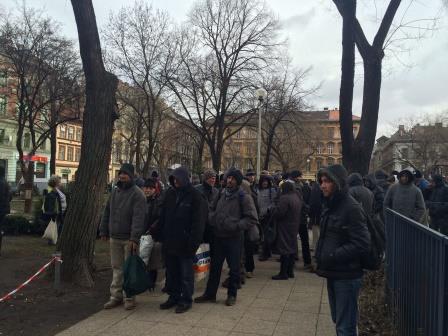 After nearly two hours, we all bundle up in out coats and begin carrying the food, coffee and tea outside into the square. The crowd of needy is already gathering. Everyone is bundled up in dark coats and scarves, food is being laid-out and the coffee and tea pots are steaming. It looks a bit like a black-and-white photo. The volunteer group is very organized and each person is assigned a different task. I’m on tea duty with Hajnalka, otherwise known as Hoiny. She speaks both Hungarian and English and teaches me how to “tea,” “hot” and “to your health” which is the equivalent of “you’re welcome.”

We serve approximately two-hundred people until we run out of food. No matter how many you help, you feel terrible when there are others left hungry. You can read all about this amazing group on www.Rebel-With-A-Cause.org. You can also read about the other fine organizations I’ve volunteered with while on the Drop Me Anywhere road. And don’t forget, links to all these organizations are on the “Organizations We Support” tab at the top of this page.

When we return to Kisüzem, it’s time to get warm, and Hoiny convinces me to order up an Unicum, a traditional Hungarian drink which contains, well, I don’t know exactly what. There are herbs of unknown origin, and alcohol, lots of alcohol. I take a sip and am pretty sure my esophagus is slowly blistering. But on the bright side, it tastes a bit like antibiotic ointment (not that I’ve ever tasted antibiotic ointment) so at least the blisters in my esophagus will heal nicely.

After a while, as I’m considering leaving, a man walks up to order a couple of beers. I saw him here earlier and notice that he speaks English. We chat while he waits for his beer and he tells me he’s from England but lives here in Budapest. He’s an animator and he’s here with a friend from college who is in town for work. His friend is a filmmaker whose wife used to work for Disney Cruise Line, my old employer. I ask if I might join them and, four-hours later, David, Dom and I are still chatting about movies, people we’ve worked with, writing, prostitutes, strange Budapest sites – we’re all confused by the Labyrinth and, especially the Masked Ball opera scenes – and Dom’s wife (we chatted about her, we’re not confused by her). Dom is incredibly happily married and reminds himself every day how lucky he is. We joke about how he’s a bit OCD but it’s really incredibly sweet.

After more time, tables are shifted and a movie projector is set up. More people begin arriving and, before long, they’re gathered around a screen watching an old-time silent movie. The room is hushed, except for Dom and David who are speaking at regular volume. I mention that, as the movie is playing, perhaps we should keep our voices down.

Hmmm, excellent point (apparently I needed a filmmaker to point that out). We continue talking.

At 9:30, after being here for over nine-hours, it’s either time for me to put on an apron and begin working here or leave. I choose the latter. Have I mentioned that I love Budapest?

Please be sure to check out www.Rebel-With-A-Cause.org to learn more about Heti Betevö and how you can help.

Have you voted for the location of the next Drop Me Anywhere trip? you can vote once per day per electronic device – Click Here to Vote!

Lost in a Tacky Tunnel The Jewish Quarter