A Serious Day and a Cabaret

Today I head over to the House of Terror Museum, which, if this were October, would sound like one of those Halloween haunted houses, but this is a museum which has one has been in operation year-round since 2002. It explores the two terror regimes which controlled Hungary for forty-years.

I begin walking down Erzsébet körút street when I notice I’m heading in the same direction as the trams. As I’m still irritated with the whole spending Ft3,000 for ten tickets and only receiving two (read about that here), I decide to hop on one using my previously used ticket, not because I can’t walk – it’s another beautiful day – but because, darn it, I want my money’s worth and there’s no security entering the tram.

Two stops later I hop off the tram and walk down the street to 60 Andrássy Ave. I pass two girls standing on the street looking confused and discussing where the House of Terror Museum might be. I point up to the sky indicating the word, Terror carved into the roof of the building.

As I enter, I pass signs which, in English and Hungarian, tell a brief story of the history of the building and its use by both the Nazis and the Communists, who took over after they overthrew the Nazis in Hungary. After paying my fee I’m handed a guide which instructs me to begin my self-guided tour on the second floor. While audio tours are available, I don’t feel the need to rent one as most signs are in English and videos are subtitled. 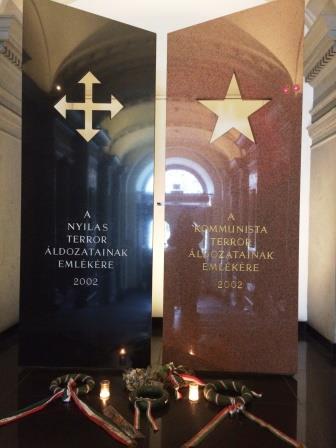 As I walk into the exhibit, I enter a dark room with a dividing wall placed in the center. On one side of the wall are a collection of video screens which show films of the Nazi occupation and the results. Signs along the side tell the story of the progression and the resulting atrocities. On the other side of the divider are video screens showing films which tell the stories of the communist government. Two terrible times in Hungarian history which kept people as prisoners in inhumane conditions for over four decades. While the videos are silent, the sound of typical communist era music envelopes the room.

There are also old-fashioned telephones lining the walls throughout the museum which, when various numbers are dialed, tell different stories and play different historical speeches. Unfortunately, while the signs are mostly in Hungarian and English, the recorded speeches on the phones are in Hungarian.

While the second floor splits its focus between the atrocities committed by the Nazis in this building, and the atrocities committed by the Communists in this building, the rest of the museum concentrates on the communists. Some locals I’ve spoken with object to this, which is understandable. Still, I feel that there are certainly many reminders and memorials to the victims of the Nazi regime and it’s imperative that both eras are spoken about so this never happens again.

Next, I proceed to the first floor, where I learn of the requirements of farmers to meet quotas before they could reap any of the profits. Quotas were constantly raised so that, at some point, farmers had to give all of their harvests to the government. Their families began to starve. After a while, quotas became so high that farmers couldn’t hit their targets. This is when officials would show up at their door and, often, people were taken away, with some brought to 60 Andrássy Ave., locked in the underground cells and tortured. Many simply disappeared. There are video archived interviews with many farmers and their families, all with English subtitles. As I walk through, the voices on the videos play loudly and begin to blend. This is done with a purpose, as the overwhelming sound plays an important part in the feel of this museum. This floor also includes sections on the 1956 uprising in which brave Hungarians tried to protest and change their situation. Many of those who participated disappeared, never to be seen again.

Finally, I head down to the basement where samples of the various cells are kept to show the cruel reality of the times (both Nazi and Communist). The only option to descend into the basement is via an elevator. The guard gathers about eight of us to step into the elevator. The doors close and a video pops on. It’s an interview with a man who was responsible for cleaning the execution chambers. He tells the story of the hangings of prisoners in detail, all the while, the elevator descends slowly into what must have felt like the pit of hell to those held here. Immediately following the man describing how the doctor would pronounce the prisoners dead, the door to the elevator opens and we step into a hallway containing re-creations of some of the original cells which were down here. There is one which is only large enough to accommodate one-person standing upright; another, with no light whatsoever and, which is only about four-feet tall. This would prevent the occupant from standing fully upright at any time. There’s one cell that is full padded and would prevent what surely must have seemed like an easier way out – suicide. Another holds the instruments of torture and still another, which has no wooden planks or concrete slab for a bed as many others have, but only water on the floor so the occupant would be wet at all times. It’s truly the stuff of nightmares.

I leave the museum with a much clearer understanding of Hungary and its history. We, in America and elsewhere in the world, think of the end of World War II as the end of the atrocities committed. For Hungary, it was only the beginning. And then, we think that until the Berlin Wall fell, it was really East Germans who had been suffering. We knew of the deaths at the Berlin Wall and the separation of families. But I, for one, was not aware of the immense suffering the Hungarian people endured during those long years and, as the combination of Socialism and Communism turned neighbor against neighbor, as everyone was simply trying to survive, it’s a wonder to me that Hungarians are able to trust anyone.

I tend to include some humor on this site in order to tell interesting stories and give insight into my sometimes unusual point of view. As you’ll notice in the previous paragraphs, there are no jokes or snarky comments because, some things are so incredibly tragic that there is no humor to be found. The story of this building and the people who suffered in it is a representation of that.

I return to the apartment, change my clothes and head out to lighten up my mood, but not before stumbling on a small farmers market where I buy a nice lavender soap and some cured pork (it’s a Hungarian pig thing) to eat with my morning bread and cheese. I forgo the fried pork as I’m hoping to live through this adventure without suffering a heart attack.

I head out to the Orfeum Club where I’m seeing a dinner-cabaret show. Upon my arrival I’m shown downstairs to my table in the showroom. I’m seated at a booth, order a glass of wine, and am soon joined by three ladies who seem to be having a girls’ night out. I ask if they speak English and, while two say they don’t, one says she speaks a little. Their names are Marcsi, Nora and Mirella and, it turns out, they speak more English than they think they do. They convince me to order a glass of Palinka with them. Palinka is a Hungarian alcoholic specialty made from pretty much any kind of fruit you’d like. As I’ve been told that everybody has their own recipe, I interpret this to mean that it’s “Hungarian Hootch.” We order the cherry Palinka and, before you can say, “Egészségére” (to your health) we’ve knocked back our glasses, swished it around in our mouths in order to taste the cherry (I taste no cherry), and swallowed it in one gulp. While it goes down smoother than the Unicom I drank a few days ago (read about that here), it does leave a nice warm sensation in its wake.

I order a salad for dinner and, before long, the show begins. The Master of Ceremonies is the male singer, while the cast also includes two female singers, two male dancers and three female dancers. Their repertoire is all in English and includes Diamonds Are a Girl’s Best Friend, Hey Big Spender, Buble’s Feeling Good, and Fever. I’m reminded both of the shows on cruise ships in the 80’s and 90’s, as well as the opening of Indiana Jones and the Temple of Doom when Kate Capshaw is singing in a nightclub in Shanghai. It’s a little cheesy but also feels a bit 1930’s exotic, and reminds me of what I love about travel.

By the second half of the show, the girls and I have gotten to know each other a bit and Nora has made me laugh with her limited English phrases including her comment of, “Challenge accepted,” when a female dancer does the splits on shoulders of the two men.

The show ends at around 11:00 and the girls and I leave to head back to our respective abodes. It’s been a fun, lighthearted evening; a perfect ending to a serious day.

Only a few days left to vote on the next Drop Me Anywhere location. Please stop by and tell me where to go! VOTE!

The Strong Hand of the Law and the Church The Good, the Bad, and the Köszönöm’s