It’s my final night in the great city of Budapest and I’m sad to leave. I’ve had some great experiences and met some wonderful people (you’ll read about the last two weeks or so in the book so, you know, buy it when it comes out). Tonight, I step outside my apartment to head over to the Irish pub for Trivia Night. As soon as I exit my building I run into a strangely dressed man and his daughter, who’s dressed as a little princess.

“Where are you going all dressed up?” I ask.

“Oh, today’s Purim (a Jewish holiday) and we’re going to a Purim party!” the man tells me.

“Ah, then you should come join us.”

As it turns out, this strangely dressed man is Shmuel, the Rabbi of a local synagogue.

We enter a nondescript building which happens to be the synagogue. Upstairs is an event room 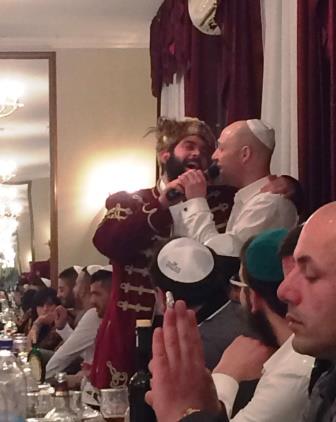 where I find tables set up to seat over 100 people. Prayers are said, and the food and drink is passed. Every once in a while the Rabbi breaks into song, or raises his glass and toast each of the over 100 people individually.

We raise our glasses full of whiskey and palinka (we’ve spoken of palinka previously). I’m told the Rabbi says that drinks are a Mitzvah (a blessing). Who am I to argue?

It’s a great few hours eating a fantastic dinner, complete with Homentashin (a traditional pastry or Purim), good drinks and singing. It’s truly like a moment out Fiddler on the Roof.

After the party, I say my goodbyes (no hugging the Rabbi – that’s not allowed for a woman) and continue on to Jack Doyle’s Irish Pub where I join a team on trivia night. Our team, which we name The United Nations, is made up of a pair of Irish brothers, a Texan, his Hungarian girlfriend and me. While we don’t win, we snag a respectable thirty-nine out of fifty points.

I sleep very little, even under the influence of half an Ambien and a cup of lavender tea prior to bed (oh, and there was the whiskey and palinka from earlier. . .oh, and a well poured Guinness at Jack Doyle’s), as I’m nervous about India.

So now, here I am, on a Qatar Airways jet, with my fake wedding-ring, headed to Delhi by way of Doha.

So why am I nervous about India? A few reasons: first, culturally, it’s very different from any place I’ve been before. Second, as you know, I like to travel with minimal planning and, with India, that’s simply impossible. In order to secure a visa, you must have a plane ticket out of the country. As I have no idea where you’ll send me next – stand-by, the next vote is about to be published – I simply bought a plane ticket to Kuala Lumpur, as they tend to be cheap from India and you can get most anywhere from there. Also, you may need to show hotel reservations for each night. So I have reservations for every night of my stay (what?!). But, once I arrive and snag my visa, I’ll be canceling some of these (I checked into cancellation policies before I booked them).

Another reason for my trepidation is the challenge of getting around. The trains cannot be reserved online by foreigners ahead of time. You must have a national ID number to reserve one so you must either have an Indian citizen reserve it, or go to the train station yourself and fight the crowds while praying they still have a ticket, which tend to sell out quickly.

Finally, there have been some well-publicized news reports about attacks on women. I always take media reports with a grain of salt. While in Germany, some people told me they’d be afraid to

come to America because everyone had a gun. As we know, this is not true, but it’s what they hear in the media. Still, most Indian’s will admit, there are some dangers, especially for women. This issue is the reason for my fake wedding-ring. Yes, this morning I put on my fake wedding ring from my pretend husband. He’s an awesome guy who I’ve yet to meet. But, just knowing he’s out there and that I’m due to meet up with him tomorrow will, hopefully, let a few of my more persistent admirers know to back-off. My fake husband bought me a cheap ring with diamonds as fake as he is for only $8.00 while at the mall in Budapest. This is the problem with fake husbands – fake diamonds.

As I check in at Qatar Airways, they check my documents, are momentarily confused by my confirmation paper for a visa on arrival (it’s a new service) and confirm that I have a plane ticket out of India. After a nice breakfast, I head over to my gate. Once the plane has boarded, I find that it’s just me and another man in a three-seat row, which gives us a little room to spread out. The man is Hungarian and his name is Donnat (yup, similar to the glazed kind) and he’s headed to Malaysia on business.

After landing in Doha, Qatar, Donnat and I compare our flight connections and find we both have six-hour layovers. We spend the time walking around a bit, having a drink and a bite to eat, working on our computers, and walking around some more. Donnat takes photos of the $15,000 bottle of brandy for sale and we window-shop at all of the designer shops (and I mean ALL of the designers) spread throughout the airport. Finally, at midnight, we go our separate ways.

At 7:15am, after a night of no sleep (the man sitting next to me decided to use my ribs for an armrest), and head through the customs and immigration area. First, I stop at the Ebola desk. This is not where you get it, but where you get your form stamped saying that you have no symptoms. Next, I go to immigration where there’s no one in line at the Visa on Arrival desk. After taking my fingerprints (electronically), looking at my paperwork (only flights and Visa confirmation letter; nobody seems to care about the hotels), and taking my photo (I’m sure I really do look as bad as my passport photo at this point).

Visa snagged, I head out through customs (really just a door, as I see nobody) and look for an ATM. There are two at the entrance of the airport and neither work for me. It turns out that, even with the travel notice I placed on the card (do this online with most banks when you travel as, usually, it means they won’t flag your card as possibly stolen and make it so you can’t use it), the card doesn’t work.

I soon see driver holding a sign with my name on it (I’ve arranged one through the guest house I’m staying at) and he takes me to an area with lots of banks where I figure out that another debit card for a different account works. I’ll deal with the first one later. In the meantime, it’s nice to have some cash.

Tomorrow – I arrive at the guest house and explore the craziness that is Chandni Chowk Marketplace.

A Love Letter Vote – 50 Ways to Leave Your Lover