A Day at the Museum

Please note: This article should come before Training Wheels chronologically. With lack of Wifi and, sometimes, electricity, they’ve been written but are not necessarily posted as timely as I would like. Still, I hope you enjoy

Following my rickshaw and Sikh temple tour, I hop on the metro and head over to a marketplace I’ve been told has an Airtell store. I’ve come to realize that it’s best to have a cell phone in India as reservations are fairly necessary for hotels, guest houses, trains, safaris and more. And people here really like to communicate by phone. As AT&T loves locking their phones, and I hear it can be tough to work with SIM cards in an iPhone, I decide to buy a cheap, old-style phone like many people here use in addition to their smart phones.

I exit the metro and begin looking for the Airtell store. This is a big marketplace and I ask for directions at a police booth. They look confused and tell me they have no idea (so much for asking a cop for help). I find a guy who offers to help, tells me I’ll pay too much at Airtell and offers to take me to the underground market. It sounds like a bit of an adventure and, since I only want a cheap phone anyway, I decide to give it a try.

We head downstairs, literally, to the underground market. It’s dark as the power has gone out and people are working off of generators. We stop into a place and I’m offered a stool. I tell the owner what I need and he first shows me a smart phone.

“No, I just want a simple, cheap phone to use for like a month,” I tell him.

“No, too much!” I tell him. “I just want something like this.” I tell him as I show him the hotel that Ashwani, from the guest house has loaned me.

“But the battery on this will last eight days!” he says, obviously trying to sell hard.

He then shows me a phone shaped like a race car. Really?

After much haggling, I get him to sell me a cheap phone for 2,000 Rupees which he says the screen is broken on but I say it’s just the design.

We exit and head to Airtel to buy a SIM card. When we get there, I’m asked for my passport and an extra passport sized photo. I have neither with me.

As there’s no chance of getting a card, I tell the guy who brought me here to show me the way back to the metro station. He insists we go to a book shop and I insist we don’t. I win. On the way, he asks if I’m married.

“Where is your husband?”

“He’s working in Belgium and will be joining me tomorrow,” I reply.

“How many children do you have?”

“Two,” I answer. (I’m getting good at this fake husband thing.)

“I’m married!” I tell him strongly.

“I like Indian boys and Indian girls.” I reply.

I head down into the metro station and back to the guest house to work.

The next morning, Ashwani offers to take me to the Apple service center as my E-mail on my iPhone and iPad seems to have stopped working. We tell the man behind the counter what’s happening and, well, he seems to have no clue. We spend an hour with him sending E-mails to his Gmail account. I seem to know more than him which I find puzzling as I believe that when Americans call tech support for our electronic items, we often complain that we are talking to someone in India, yet I can’t seem to find anyone who has a clue about how to fix this.

Eventually, we both give up and he gives me a number for Apple support which he says is good in India. As it’s an 800 number, both Ashwani and myself think this isn’t true. This guy gives a new meaning to the “Genius Bar.” Dejected (a common word for me here in India) I leave. Ashwani drops me at the metro station as I plan to visit the National Museum.

I come out of the metro station and ask where the National Museum of India is.

You should know that Indians will normally tell you to get a rickshaw, as they’re not a walking culture. The museum is an easy ten-minute walk from the station. Well, maybe not that easy as there are monkeys lining the streets. Oh, did I mention the Monkeys? Not the I’m A Believer kind of Monkeys, but the furry little creatures who eat bananas. In fact, the leave their banana peels lying just about anywhere. I know this because I actually fell to the ground on this walk by slipping in the proverbial banana peel (I’ve turned into a cartoon character). They also seemed to be after the bag of potato chips which I bought.

I enter the museum and pay my 600 Rupees – 300 for entrance and 300 to use my camera – which includes the audio tour headset. I like museums as I found out much about the history and culture, and they’re peaceful. This place is not. In fact, no place in Delhi seems to be peaceful. On the roads, there is a constant honking of car horns as Indian honk them simply to say, “I’m next to you.” And in the museum, people talk constantly and loudly. 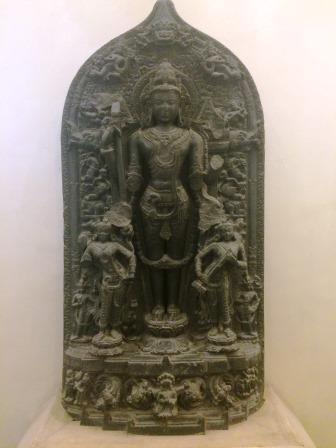 The ground floor is filled with many Asian archaeological finds which are in excellent conditions. The upper floors offer a variety of things to see including sculptures, paintings, jewelry (really amazing), swords, textiles, masks, musical instruments, and furniture. While not very creatively set up, it’s a comprehensive museum well-worth the visit. 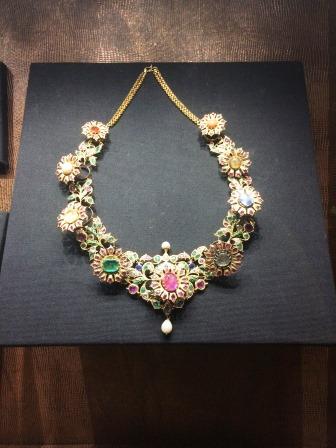 After a couple of hours, I head back to the Tree of Life to work. I, again, order in a pizza (shameful, I know; but I order from Dominos this time) and attempt to turn in early as I have an early train in the morning.