It’s an early morning, with a car picking me up at 6:00am for a 7:00am train to Agra where I’m going for one night to see the Taj Mahal. I was going to stay two nights but everybody has told me that Agra is, well, the term “pit” was used a couple of times. There’s no coffee before I leave and, if Old Delhi was any indication of what’s to come, I’m not looking forward to this train station business. I drag myself downstairs and into the car in the dark morning. The car looks as if it was new. . . back in 1956 and the man who’s driving it looks about four decades older. After three attempts at starting it, it finally putters to life. I have serious doubts that we’ll make it to the train station.

After about twenty-five minutes. We’re near the station when the driver grunts, looks back at me, and points down a closed road. I fear he’s going to kick me and my bags to the curb, and the two words he may know in English are, “You walk.”

He ends up following a jumbled mass of cars, auto-rickshaws and motorcycles around to an alternate entrance (for which he charges me an extra 50 Rupees). We stop and he takes my luggage from the trunk and, becoming so used to people yelling at me trying to sell me something, I completely ignore the man offering porter services, thinking he’s just trying to sell the tourist an overpriced, unnecessary service. I throw my bags onto the luggage scanner, remove them after they go through the x-ray machine and look in front of me. Ahead I see three flights of stairs, while next to me I see both my fifty-pound bag and my twenty-five pound bag, not to mention the backpack with my Kindle, iPad and computer slung across my back (hey, I sold everything to do this; my life is in these bags and, since I never know where you’ll send me, I must be prepared for all occasions).

I grab my bags and head back around security (really, it’s just a machine with a conveyor belt going through it, There isn’t anyone actually monitoring it) to find a porter. I step outside and begin loudly asking, “Porter?” but my guy is gone. Still, after a few minutes, I find someone to help me as, well, they know it’s a quick way to make some money.

The guy drops me and my bags on the side of some crowded tracks, I hand him some money and he disappears. I meet an Indian girl and her friend and they instruct me about how the train works. There’s on complication; I have a reserved seat, I just don’t know where it is. I  was on a wait-listed ticket until a couple of days ago when it was confirmed, but no seat had yet been assigned. My fixer said he’d E-mail me with the seat number when it came in, but I never received it. Ashwani at the Tree of Life Guest House told me that it’s not a problem as they post the seating assignments on papers on boards at the station but, as it will be very crowded and difficult to read, I should simply ask the men wearing the black jackets at the train station as they’ll be able to help. Unfortunately, even with the help of this girl and her friend, we can’t find a train station worker.

We know which car I’m in as I’ve reserved an “A/C Car” so she tells me to just get on and, when the man comes to check my ticket, he’ll tell me where to sit. I drag my bags on board and, as the car only has a few families in it, I choose a seat with an empty overhead rack, throw my twenty-five pounder up there (no way am I lifting the fifty-pounder above my head unless I’m forced to) and grab a random seat.

Many people board at a stop about ten-minutes into my three-hour journey, one of whom is a man who approaches me and says, “You’re in my seat.”

“Um, oh sorry,” I reply. “It’s just that I don’t know which seat I’m supposed to be in and nobody is here to help.”

Sensing my frustration, he asks to see my ticket where he confirms what I told him about no seat assignment. Still the PAN number that my fixer used to reserve it is on the paper. He goes to the online site and, by some miracle, tells me that I’m in the right seat. The seat assigned to me is 11A and that’s where my rear-end is planted. It’s just my fifty-pounder that’s in his seat, which he figures out that he must help me lift into the overhead rack if he’s to sit down.

I spend the rest of the ride buying a scary sandwich and a cup of coffee off the guy selling them in the aisles, and listening to another guy wander through every eight minutes with a jug while repeating over-and-over, “Tomato soup.”

Three hours later I arrive at the Agra train station. I follow the exit signs to what turns out to be, not the main exit. After weaving my way through hundreds of cars and taxi drivers trying to give me a ride, I locate the man holding a sign with my name on it; the driver I’ve arranged through the Bansi Guesthouse, my home for a night in Agra.

After a stop at Bansi to check in, eat the breakfast I’m offered, and try to do some work (internet isn’t working for now), I head off with my driver Sanjay to go see Agra Fort. Sanjay tells me the three things you need to drive in India: a good horn, good brakes, and good luck. Yes, I’d have to agree. 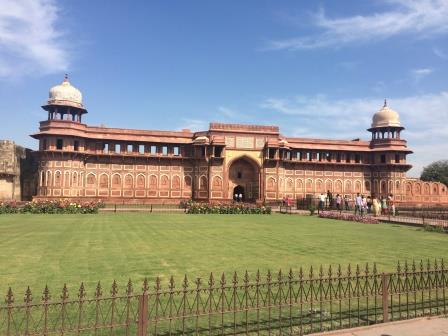 We arrive at the fort and, after avoiding the crazy traffic while crossing the street and crazy people trying to sell me their goods and services, I pay my

entrance fee and walk inside. Once inside, I hire a guide. He’s seventy-six years old and his name is Agarwal. We walk through the red, black and white buildings, each having a different use which Agarwal describes. King Oringiab, grandfather to the king who commissioned the Taj Mahal, built this one. In it he kept 119 horses, fifty-five camels, and ten elephants. Oh, and three wives and 800 concubines. Oringiab killed his brother and imprisoned his father in order to get the throne. Still, his father was imprisoned on the grounds of the fort in what was known as the Royal Jail because it included fountains, music, massages, and even a living chess game where women were used as chess pieces. It’s also from here that I get my first view of the Taj Mahal. 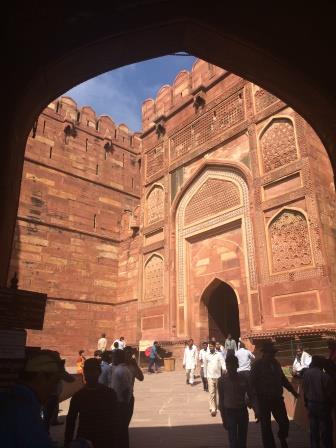 In the King’s and Queen’s residence, there’s one building used by the royal couple to play hide-and-seek (no Nintendo or TV).

An hour-and-a-half later, I exit and we head to the Baby Taj, a more basic and smaller version of the Taj Mahal. After that, we head over to Mehtabhag Gardens which are the gardens across the river from the Taj Mahal, a nice place to watch sunset. The closer sunset gets, the more people show up. Still, it’s not crowded and actually, the first peace I’ve found in a few days. I spend the time waiting for sunset doing a little yoga in the gardens. 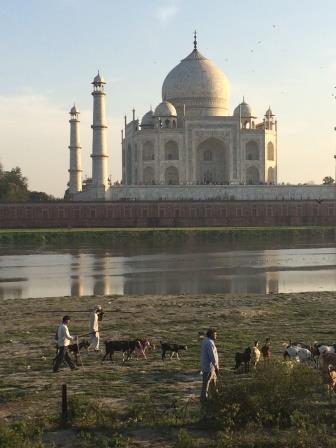 After a quick stop to pick up some dinner, I head back to the Bansi Guesthouse where my fixer calls Mr. Burman, the owner. It seems that his staff member who had called me the previous night has provided incorrect information. While she told me it would cost 2200 Rupees for a car to take me to the Taj Mahal in the morning and then to Rathambore National Park (tomorrows destination), stopping on the way to see the old city of Fhatepur Sikri, this is not true. The 2200 Rupees will just get me as far as Bharajpur where I then must take a two-hour train ride. A car all the way to Rathambore will cost about $100. I’m really just over it. I feel as if I’ve been lied to all over India. I can’t even think about getting on another train and dealing with the chaos of the station. Still, I have little choice as that $100 could pay for three-nights in a hotel room. For the first time in India, I go to my room and cry.

Have you voted? Drop me someplace nice after this please. Vote Here!

Rickshaws and Sikhs A Day at the Museum