I’m up at 8:00 this morning. I saw sunset at the Taj Mahal so I see no reason to get up to see sunrise. I have a quick breakfast, and I mean quick as, when they asked the table of five what type of eggs we wanted and I ordered an omelet (they’re very basic masala omelets here) and mentioned that I must leave at 9:00 (as pre-arranged with the guesthouse) they said no problem, and then cooked everybody else’s eggs first. Mine came at 8:58 so I settled for my toast and handed my omelet off to someone else. Lesson learned, there’s no such thing as quick here in India.

At 9:00 I went to the front door to meet my driver Sanjay. He was the driver I had yesterday who said he’d also be driving me today. Apparently, they sent him to Delhi today and they’ve given me a different driver. I’m introduced and, as I get into the front seat (I hate riding in the back as it makes me feel like Driving Miss Daisy) another man gets into the back seat. I start to say, “Who is this?” when the driver pulls away. I’ve been warned about extra people in the car and told to make a stink as, if you’re a woman, this can be dangerous. I make a stink. Neither speaks much English so I receive no explanation. After a couple of minutes of me “stinking” in the car, the driver says he’s pulling into a parking lot so I can speak with his boss.

We pull in and a man walks up. Both men get out and a new man gets in. The boss says this is his brother-in-law, Mr. Khan, who speaks English well and will be my driver. Feeling better, we head off to the Taj Mahal.

I’ve been told not to bother to get a guide here as really, what’s there to know? It’s a tribute to love. Mughal emperor Shah Jahan built it to house the tomb of his wife Mumtaz Mahal. An act of love,

though one has to wonder how he honored his other two wives. It really is beautiful and looks like a cloud hovering over the land. After handing me a fancy hand-drawn map, Mr. Khan has told me to simply sit and contemplate love while looking at it. I find a shady spot at the entrance of one of the surrounding buildings and I contemplate. I contemplate the story that this is about love. I can’t help but think of the many lies I’ve been told while in India and, unfortunately, this has tainted the story of the Taj Mahal for me. I begin wondering if this “monument to love” is simply a story they made up to bring in the tourists. I don’t like the way India is changing me and I decide I need to check out early flights out of here.

I weave my way through all of the people trying to sell me things, give me rides and asking me for money, and meet up with Mr. Khan. He asks me how I liked the Taj Mahal and I explain my mixed feelings and how I’m having trouble believing the “love” story after my experiences of late.

“Uh, yeh, sure.” I say. No philosophical conversations here.

We make a stop back at the guesthouse and begin our journey to Bharatpur train station, stopping 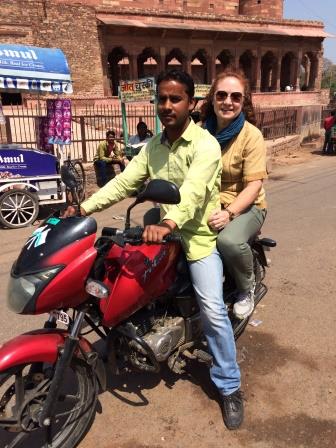 at Fhatepur Sikri on the way. Fhatepur Sikri is the old capital and, apparently, very large. As I only have about an hour to see it, Mr. Khan pulls to the side and explains that, as he can’t pull up to the entrance, it will be quicker for me to ride on the back of a motorcycle than to walk. He hands me off to his friend with the motorcycle, I climb on the back and off we go. It’s a nice little adventure. Once at the entrance, I hire a tour guide (I’ve been told to pay no more than 500 Rupee) and he shows me around the place that has obviously been “maintained” (that’s what they call restored here). When we reach the main entrance we remove our shoes because there’s a shrine or something within. Pigeons fly throughout the place. We reach one area and my guide tells me I should buy a small blanket and some flowers from this man. I’m then supposed to enter a shrine and lay the blanket on the pile of hundreds in the center, tie the flowers to a screen and make a wish which I can only tell to my husband. He says the blankets are later donated to charity. I think the blankets are donated to the blanket-seller to sell again. I decline and my guide seems pissed off. 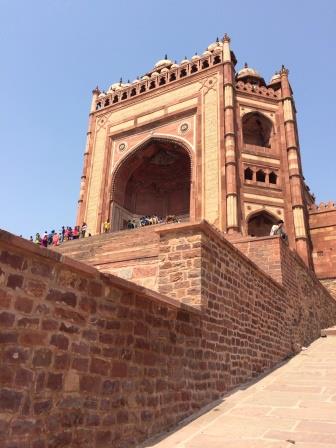 As we walk and he shows me more, I feel something moist on the bottom of my foot. I stop to look and am beyond thrilled to see the pigeon poop I’ve stepped in. My guide laughs and tells me it’s good luck. I’m doubtful.

After a few more stops where my guide points out the wonderful carving work on the trinkets for sale and again, everyone seems irritated that I’m not buying (sir, if I buy your carved elephant I’ll have to dump another pair of shoes. It’s luggage real estate), he takes me back to the entrance where I climb on the motorcycle and head back down to meet Mr. Khan.

After a quick stop for lunch, and many miles of Mr. Khan telling me that I will bring people back to use his services, arrange tours to use his services, and write about his services in my book, we arrive at the train station. Mr. Khan snags me a porter who helps take my bags to the location on the side of the track where my car should be when the train arrives. I sit on the ground leaning against my bags with my backpack strap wrapped around my ankle. A group of men gathers twenty-five feet away. Announcements are made, one of which tells me my train will be an hour late. I sit back and read my Kindle. I’d like to write, but, with this group of men staring at me, I don’t dare take out a computer of iPad. Slowly the group of men grows larger until there are about twenty of them. A couple of them begin circling me, with one behind my bags stopping within arms length. I look back and rudely shout, “Can I help you?” He smiles and walks away. I decide to move away from where my car will arrive and over to some benches where a family is sitting. As I stand, the group of men begins howling and yelling. I’m really just done with this place.

After ten-minutes of sitting on the bench, my porter returns. My train is only twenty-minutes late and will be arriving any minute. The porter helps me drag my bags onto the train and into the overhead rack. I pay him the agreed upon 100 Rupees and take my seat next to a young man who’s one of the twenty-somethings I’ve heard about. He works at Rathambore National Park and tells me that he’s climbing Mt. Everest in nine-days and will probably retire in about six years as he’s pretty wealthy. While I’m unimpressed with his wealth story and somewhat doubtful of his Everest one, he’s entertaining and helpful when I’m trying to figure out where to get off. He’s also one of the few Indians who has offered to help me with my baggage.

As his driver carries my bag over the ramps of the train station, he points me to my exit where the manager of my hotel has told me I’ll see taxis. I’d asked for a car to meet me but was told it would be no problem to catch a taxi. Though my train was only twenty-minutes late to board, it was and hour late to arrive. It’s dark outside and there are no taxis. There’s a fairly official-looking guy standing with two cars. I ask about taxis and he looks confused, but tells me he can call a taxi and it will be 500 Rupees. I tell him the man on the train has said it should be 100-200 Rupees. The man insists it will be 500 Rupees. To be honest, I could simply pay the 500 Rupees, but I’m so tired of being an easy target that I refuse.

He points out one tuk-tuk (auto-rickshaw) sitting across the driveway. As I approach, I see that a family has beat me to it. They and their driver offer to squeeze me in. It’s a nice thing that stands out in the frustration of the last few days. I explain that I don’t think the six of us and all our bags will fit into the tiny vehicle. They insist we will. It turns out I was right, but the driver calls another tuk-tuk and the family graciously offers to wait with me until it comes.

Tomorrow – I arrive at the “resort,” have an uncomfortable conversation with the owner and go looking for tigers.

Have you voted for the next Drop Me Anywhere trip? There must be Fifty Ways to Leave Your Lover. Tell me where to do that. Vote Here!

A Day at the Museum Looking for Mowgli