After an extremely long day – the days seemingly longer due to the irritations – I drop my luggage in what is listed as a three-star room which, in America, would be a one-star room and go to the “restaurant” in the “resort.” There’s one guy sitting there and he seems to speak English. I ask if I might join him and am invited to sit down. His name is Heinz and he’s from Germany. He’s well-traveled and it’s so nice to connect with someone and have a real conversation with someone who’s not trying to sell something or get money from me. I’ve missed this.

The manager comes over and begins chatting with us about Trip Advisor and how he hates bad reviews. He gives examples of some he’s hated. He also begins telling us of the nationalities he hates dealing with. We learn that if a Pakistani checks into a hotel you must inform the government and a guard will be sent until the Pakistani checks out. The manager also tells us how he hates Jews. He says that the Israelis come and leave their old, dirty sheets and take his nice clean sheets. I explain that there’s a difference between Jews and Israelis, and don’t even bother to get into a conversation about generalizing. He continues his stories using the terms Jews and Israelis interchangeably. I consider leaving this place and finding another but, at this time of night, in the middle-of-nowhere, India, it doesn’t seem to make sense. I decide to tell him of my heritage upon check-out.

I take a shower while washing the bathroom as there’s no shower curtain and the tiny drip that comes from the shower seems to spray less in the tub and more outside of it. The bathroom floor is actually constantly wet as the toilet tank seems to have a leak and, the only way to get it to stop running is to shut the water to the tank off after each flush. I’d hoped to get some work done but the Wifi works only for ten-minutes before going down. I move to the other side of the bed after noticing a nasty stain in the shape of a straight line (read what you will into it). This Jew walked into dirty sheets. I read for a while, shove in my earplugs, slap on my eye-shades and sleep. Tomorrow’s got to be better, right?

I sleep in until 9:00am, waking without an alarm clock for a change and attempt to get some work done, but the Wifi is still down so I go to the “restaurant” for my included breakfast. I begin by sitting outside but, as the power has gone out a few times this morning (and will go out a few more times), the generator is on and it’s noisy and smelly (two of the lesser known dwarfs) and is making me cough, so I move inside.

I head back to my room to load some things onto a thumb drive as the manager, after learning that I’m a travel writer, offered to let me use his wired computer should the Wifi still not be working. At the office, they offer me a laptop with one of the Wifi USB sticks. By the time I walk across the courtyard and get back in my room, the hotel Wifi is working.

I spend much of the day with Norton antivirus taking over my computer as, ever since arriving in  India, my E-mail, Facebook, antivirus and most of my electronic equipment hasn’t worked properly. Still, I get an hour or two of work done while also checking out options for travel within and outside of India.

At 2:45 I’m called for my Safari. Rathambore National Park is known for its tigers and, while I’ve been on safari in Africa before, it seemed to make sense to come here as you voted for me to go to find Mowgli and I think this might be where he lives.

I board a twelve-person open-air bus with a painted on license plate. Already on board are two women and one man, all speaking Hindi. We stop at four more hotels to collect people. It’s clear that this tour will be in Hindi as I’m the only non-Inidan on it. Actually, it turns out it’s less of a tour and more just talking, scratching heads, guides talking to guides in other jeeps and buses trying to figure out where the damn tigers are.

We see birds, we see deer, we see peacocks, we even see an alligator (well, we see the bubbles the alligator is making from under the water). What 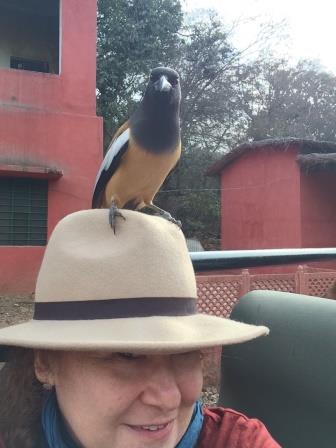 we don’t see is tigers. We end up in a gathering of two buses and a jeep where we sit for the last hour. There are no explanations (at least none that I can understand) before heading back to drop us at the various hotels. It’s not a problem for me that I didn’t see tigers as I used to be a tour guide and I never promised wildlife; that’s why they call it wildlife. Besides, like I said, I’ve had the experience in Africa.

I dump my things in my room and head next door to catch some dinner. Outside I see Heinz sitting and writing postcards. He invites me to sit with him. We enjoy a nice dinner together where he tells me of his travels since his retirement eight-years ago – including spending a night at Mt. Everest Basecamp – as well as his morning safari where he saw three tigers.

After dinner, we move over to my patio for a beer. The hotel doesn’t have a liquor license so we pay one of the servers to go to the store around the corner and pick us up some beer. We’re not allowed to drink it in a public place (the restaurant, the tables in the courtyard, etc.) so we drink it on my patio which, we’re told, isn’t a problem.

Heinz brings down his card reader which we plug into my computer to look at his photos from his morning safari. It turns out that, besides the tigers, he saw a crocodile (not just the bubbles).

We spend the next hour talking travels while enjoying a beer while the power, once again, goes out. This is a calm moment which I’d imagined India to be. It’s a memory I will hold close.

Tomorrow – The train to Jaipur.

Have you voted today? Please vote for the next Drop Me Anywhere destination. You can voted once per day per electronic device! Vote Here

The Long Road to Rathambore Breakdown