This morning I’m taking the train from Sawai Madhopur station, the train station serving Ranthambore National Park, to Jaipur Junction. I’m dreading another train ride. Trains? I love ’em. I’ve loved them in the U.S., Europe and even Africa (okay, that one was when I was tour managing and it was the Rovos Rail, known as one of the champagne trains of Africa, so it was much fancier than your average train). Where I don’t love them is in India. Yes, it always looks cool in the movies when people are hanging out the doors and windows – very exotic. In real life, it’s smelly, noisy and I feel like I need an immediate shower when I get off. Still, it’s a two hour ride. What could go wrong?

I grab a quick breakfast in the “resort” courtyard. The flies and I fight over the omelette. It’s a good thing I have two as I asked for a cheese and mushroom omelet and I received a cheese omelet and a mushroom omelet. Unfortunately, the flies seem to think both are theirs. The coffee arrives (instant) and, once again, after a few minutes a thin film forms on top which I skim off with my spoon (I ask no questions and try not to think too much).

Following breakfast, I head into the manager’s office to settle my bill. I’m asked to write my name and address in the book along with a comments. I write “Stayed 2 nights.” Probably best not to write more. The manager asks how my stay was and, as I don’t want to get into all of the things I think are wrong, I decide to concentrate on the bigger issue.

“To be honest, that first night when we were talking in the restaurant, well, I was really a bit uncomfortable,” I inform him. He says nothing.”You know, when you were talking about Trip Advisor? And how you were saying which people you don’t like. You said you didn’t like the Jews. You should know that I’m Jewish.”

I expect him to say something like, “Oh, I was talking about the Israelis” Instead, he simply looks up for a second and says, “Hmph.”

I head out and Heinz and I climb into his car as he has graciously offered to have his driver drop me at the train station. As I walk into the station, accompanied by a wild boar (apparently Pumba is riding the rails today), a cow walks out. (To my friends who complain about dogs on the New York subway, well, it could be worse.) To be fair, I don’t believe either the cow or the pig actually had tickets to ride. There are no porters to assist at this station so I drag my bags up a long, steep ramp to cross the bridge over the tracks in order to get to track #2 from where my train will depart. I meet a man on the stairs who instructs me to turn left at the bottom of the stairs and I’ll begin seeing signs for B1, B2 and B3. B3 is my car today. It’s a third-class A/C coach. I’ve previously had first and second class ones but, as my ticket was last-minute, this was the best India Someday could get for me. I see a sign for B1. I continue walking and see a sign for B2. The signs further down change to General Boarding. I try and ask a few people but they either don’t speak English, or really have no clue what I’m talking about. I’m sent back and forth, with my luggage trailing behind. It’s day seven in India and it’s all built up. Today is the day I let it all out. Ashamedly, tears start flowing. An overreaction, perhaps. It’s just a build-up as, each day I wake up thinking, ‘today will be a better day,’ and each day is hard. The man who originally helped me sees me and asks if he can help. I tell him the challenge and he explains that they may have added a car at the last-minute and I should just get on and figure it out once we begin going. 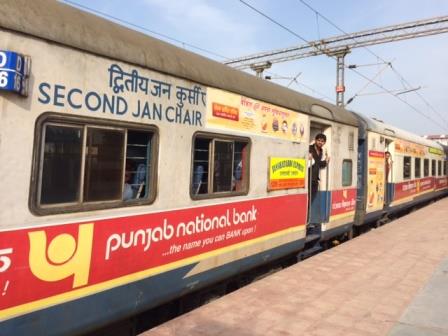 The train arrives and I drag my bags on board. Miraculously, I’m not far from my seat, yet when I get there, someone is in it. Being third-class, this car is different and the seats double as beds (similar to a couchette in Europe). A man sitting with the family that’s currently occupying my seat asks if I might take seat 60A. It’s clear that he and his family were assigned seats in different cars and would like to travel together. As long as the seat is in the same class, I don’t care where I sit. The man accompanies me to his previously assigned seat where a young man seems to be sleeping. The man wakes the younger man, who is tangled in his sheets and asks him to move. Seeing him struggle to get himself gathered, I offer to take the seat across from him as long as nobody else boards with that seat assignment. After a few minutes, everyone is settled. Before the man returns to his family, I ask how I might know when we get to Jaipur Junction. “Oh, I’m getting off there too. I’ll let you know. It’s the next stop.” “Really?” I ask. “It’s supposed to be in like two hours. There are no other stops before?” I question. “Oh, not the next stop, but the next stop after that,” he says. He says something in Hindi to the young man across from me and tells me that the young man is also getting off at Jaipur Junction so he’ll let me know when we’re there. The young man sits across from me picking at his bare feet while eating. When he’s finished (eating, not picking at his feet), he throws the paper holding his food under the seats. Two-hours later he tells me the stop for Jaipur Junction is coming up.

I gather my bags and step off the train. It’s beginning to rain and I hope I’m in the car before it really starts to get wet. I’ve been told my driver will meet me at my train car so I walk one car back to my original car. I see no one. I walk up and down a few cars and see nobody with a sign. I continue out front and still can’t find my driver, so I call the host of my guesthouse. It’s difficult to hear over the thunder which now booms and the taxi drivers convinced that if they keep talking, I’ll choose to ride with them. Shveta, the owner, tells me the driver is at the station and she’ll call him and attempt to connect us. It’s at that moment when a thought comes to mind. “Is this Jaipur Junction?” I ask one of the shouting taxi drivers. “No, that’s the next stop.” Crap. I tell Shveta that I’ve gotten off the train one stop early and she offers options of taking a taxi to the next stop (about 12 kilometers away), sending the driver from Jaipur Junction to meet me, or hopping on the next train coming through as all trains stop at Jaipur Junction and it will take just ten minutes. I choose the last option. After all, hopefully this will be my last India train ride, so I’ll finish it.

I board the train not worrying about which class car I climb into (there are cattle guards at this station so there are no cows anywhere inside). What I see makes me understand the importance of choosing your class on an Indian train. Men are lying everywhere. The smell from the bathrooms, mixed with the smell from the food I see being prepared behind a counter convince me never, ever to eat on an Indian train. Indian train travel is in no way like western train travel, yet it can be okay. Just be sure to reserve your seat.

I find a seat with a nice family whose teenage son is entranced by his various electronics lying around and whose daughter shows me the beautiful henna work which her friend drew on her hands.

Ten-minutes later I climb out of the train and see a sign held by my smiling driver. We weave our way through the very crowded station and he pulls up his car. Not long afterwards, we pull up to the Jaipur Friendly Villa, which I found again through India Someday. I’m greeted by the owner Shveta and her husband Kul. They invite me to drop my things in my room, wash up and have some tea. The room is lovely with a large bed and all the comforts of home. It’s an oasis in a few days of complicated, difficult travels. Shveta and I sit and have a tasty ginger chai tea and some delicious samosas. I begin telling her about the last few days and the dam bursts. The stress of the last few days all comes out in tears. What the heck? I can’t seem to stop. I decide to stop fighting it, let it all out, and be done with it. It’s a new location, a new day and, hopefully, the old me. Strong, curious traveler. It isn’t a proud day for me but, perhaps, a necessary one. Three months on the road traveling alone, not knowing your future – both immediate and long-term – can wear on you. I still believe it’s worth it. It was just a bad week at work. Tomorrow – Jaipur turns it all around. Have you voted yet? Well, do it again. Where will we go next? You decide. Vote here!

Looking for Mowgli Joy in Jaipur