I wake this morning after a great night’s sleep. Was it exhaustion or perhaps just a safe place to land? Whatever it was, I gather my strength and decide to give India one last shot, leaving it up to Jaipur to lift me up.

I come down to a nice breakfast of toast, fruit, cereal, banana bread, a masala omelet and chila with paneer filling (a kind of chickpea crepe with Indian cottage cheese filling, which is nothing like American cottage cheese). The food is great and I’m joined by four ladies who I call, “The Shopping Ladies of Mauritius;” three generations of a visiting family who are also guests here and who love to shop. Sufficiently full, and with a plan for the day which my hosts from Jaipur Friendly Villa have helped me devise, I’m ready to give India another shot.

Kul, the owner’s husband offers to take me down the road to stop at an ATM as well as pick up some contact lens solution (it’s the everyday things that can be the most difficult). Chores done, he makes a deal with a tuk-tulk driver to take me to the City Palace. As Kul’s Indian, the deal he makes will always be better than the deal I make. Now I always have a frame of reference as to how much a tuk-tuk from the guest house to the Pink City (Central Jaipur) will be.

The tuk-tuk ride is longer than I’d imagined and I arrive at the palace at least thirty minutes after I started. At the equivalent of about US $2.50, the tuk-tuk ride is a bargain. I pay my ticket price to the City Palace and enter. Once inside, I go to the audio guide desk and pick up a headset. I really like the audio guides as they tend to explain things well and, being a former tour guide, I know how stories can be a bit different from one guide to the next, and I assume the audio guides are the most consistent. 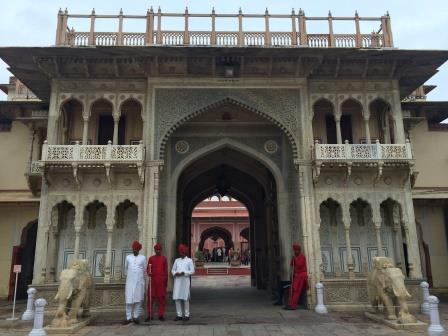 The City Palace is both indoors and outdoors with open courtyards lined with rooms in which you can view various items including spears, shields and guns, textiles, huge silver urns, thrones and even carriages of the royal family. The audio guide also explains which areas were used for public visitations 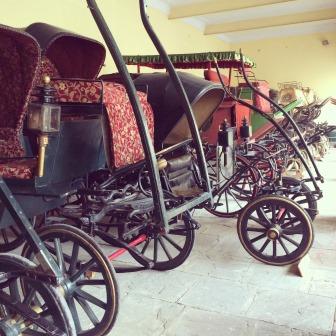 as well as those used for VIP visits. A separate part of the palace is actually in use today by the royal family. I’ve waited for my royal invitation for chai but, apparently, it was lost in the mail.

I take a short break and enjoy a nice piece of chocolate cake and a not-so-nice-cappuccino (still, nice that they try) in the courtyard and begin to watch a puppet show. Within a few minutes, it begins to rain and I take my cappuccino, finish walking through the courtyards and head to the exit.

The palace is a great place with interesting things to see and staff inside to help you along and explain things without any expectation except that you enjoy yourself. This is what I’d hoped from India.

I head over to the Jantar Mantar, the observatory conveniently located right next door to the palace, and buy the combination ticket which gets me into a few sites for two-days and only costs 400 Rupees. It’s worth it as admission to most of these sites costs 200 Rupees each.

The Jantar Mantar is a unique place with an interesting history. Maharaja Jai Singh II, the founder of the ‘Pink City’, was a scholar and an avid astrologer. In 1718, he wanted to construct a world-renown observatory. For this, he studied astronomy and then built five different observatories around North India. At these places, he would sit with other astronomers and observe the sky (a romantic man).

The ‘Jantar Mantar’ at Jaipur, is the biggest conservatory in the country and was renovated many times. In it, I find various instruments that supposedly offer precise measurements of time, the azimuth, declination of the sun and the positions of constellations, along with several other astronomical phenomena (wow, I sound smart). When I hear these explanations on the audio guide, which I’ve again rented, it begins to sound like all the adults in a Peanuts cartoon. The audio guide leads me through the place through a make-believe conversation of a kid and his grandfather. This kid is much smarter than me. I understand that the markings and angles on the stone fixtures cause shadows which tell the time, and

where the earth is in the universe, along with many other things. I just can’t, for the life of me, figure out how to read them (I blame the cloudy day). Still, I get excited when I see the astrological section that has a structure for my sign, Gemini, yet I understand from the audio guide that the structures don’t point to these constellations. I have no clue what it’s all about. It’s interesting that the Jaipur observatory was functional for only seven years , as the Maharaja was not very successful in deriving accurate, astronomical observations (perhaps he should have asked the kid on the audio guide for help).

I hop in a tuk-tuk with a driver who speaks good English and tells me he’ll take me for a short tour and drop me back at Jaipur Friendly Villa for 300 Rupees. We stop at the Water Palace (famous from some photos) and the Wind Palace, where I pop out to take photos, before continuing on to a “jewelry maker” and a “textile maker.” I get the feeling that the make part is a bit exaggerated, as the gem cutter happens to be off, so I just see his equipment. I do see the textile maker, though I think this part is mainly for the tourists as they then try to sell me scarves which they admit are machine-made. 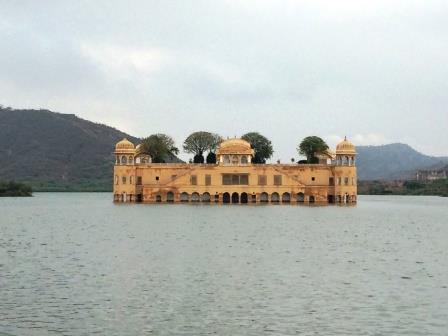 We also, unfortunately stop in a back alley which has a cement lot in which elephant painting is offered. I see two elephants chained by three-legs. It’s a very difficult site and I ask that he not bring people here as it supports the abuse of these amazing creatures. I doubt he’ll listen.

We head back to the guest house, work for a bit, then walk down the road to Jammies Kitchen. I’d ordered dinner delivered from this place yesterday (yummy butter chicken) and, as it’s very close, decide to visit in person tonight. It’s a nice quiet place that has great food and isn’t too expensive. Tonight I order something I can’t pronounce along with a sweet lassi (a yogurt drink which cools some of the heat in the food).

I return to the guest house where Kul, a fellow whisky drinker, and I share a Scotch/Indian mix whisky. Life in Jaipur is much better.