I wake today, renewed. I’ve had one day without fear, frustration and disappointment. Can I possible make it two in a row? After another filling breakfast at Jaipur Friendly Villa, truly the nicest guest house or hotel I’ve so far stayed in while in India, I head out. Today’s plan, head to the Amber Fort, to Hawa Majal (the Wind Palace) and then into the Pink City to look around. I’ve told Shveta, the owner of the guest house, and Kul’s wife, that I’ve seen enough forts here in India, but she insists I go.

As Kul is heading out to work just when I’m about to leave, He takes me to the Queens Road (the main drag) and snags me a tuk-tuk. I take the long ride up through the city gate into the Pink City, out the other side and up the hill to the Amber Fort.

I arrive and, while there are people trying to sell me things, I’m not mobbed. When I say no a 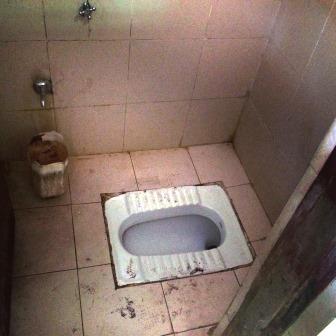 couple of times, for the most part, they stop asking. It’s refreshing. What isn’t refreshing is the toilet. I’ve been drinking my bottled water and get to experience many toilets today. I use the first one I see at the fort which is Indian style. In many places in the world this is referred to a ‘squatty potty’ (I wrote about one in Hungary Ruins Are in the Eye of the Beholder, but that was mainly part of the charm of the ruin pub. This one is nothing close to charming). It’s unisex and only holds one at a time, unless you’re men, and then there are three Indian style urinals, which means they’re in the ground and not against the wall. For the ladies, there’s a stall inside with a larger version of the urinal. There is no toilet paper and I learn that I can hold my breath much longer than I’d thought). 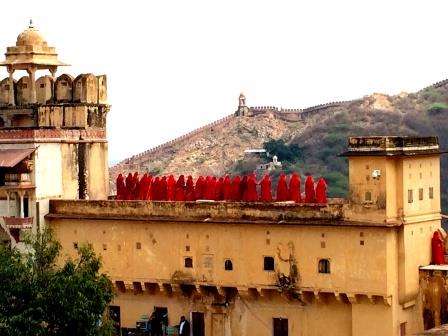 I step outside and enjoy the fresh (still polluted air which has made me cough throughout India) and continue walking up a cobblestone hill. This is the path the elephants take to bring tourists up for an extra charge. I learn ends at 11:00am as it gets too hot and the elephants get cranky (surprisingly, they use female elephants as the males are more cranky than the women. Insert your jokes here). As I walk the path, I begin to see dozens of people in traditional, colorful dress sitting along the sides while holding bowls of flowers. In my head I think, “aah, they must have heard I was coming.’ In reality I hear, “no photos!” as I slowly put my iPhone back into my purse.

When I arrive at the top, I step through the gate and find myself in an expansive courtyard surrounded by ancient buildings. People are gathered towards the back watching a scene of colorfully dressed elephants and horses, with men in costumes of mesh armor atop. There’s even a colorfully dressed king an elephant. Interspersed amongst the animals are men in traditional white dress along with red-veiled women looking over from the top of the fort. Every once in a while, drums and horns ring out. It’s like a scene from a movie. Oh, wait, it is a scene from a movie. 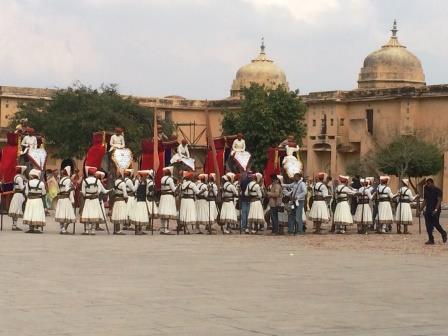 Today, Bollywood has come to Jaipur. The Amber Fort is the set of Bairao Mastani, an epic Bollywood film currently in production. The man atop the elephant is the star’s double, as the star had a minor accident a few days ago and is not making an appearance in Jaipur. This will later hit the local news, as many were anxiously awaiting his appearance to try to get a glance. Some think he’s simply a spoiled Bollywood star who’s afraid to climb atop the elephant. I’ll give him the benefit of the doubt as I have no idea who he is anyway.

I spend quite some time chatting with locals who have gathered to watch the exciting event. I begin playing with a family of four children. I ask if I can take their photo. They say yes and, after I’ve taken it, they say, “Money.” I give them 10 Rupees, irritated both that they didn’t say anything before I took the photo and that, as a white-skinned person, I’m constantly being asked to pose for photos with people and have never asked for money. Perhaps I’ve found a new income source.

Anyone who lifts a camera to take pictures of the actors is told, “No photos.” I chat with some of the crew – dolly operators, sound techs, security guards and bouncers. It’s the security guard and bouncer who provide me with much of the information on the shoot. After a while, I smile and ask, “Really? No photos?”

I snap a quick photo and put my camera back in my purse. 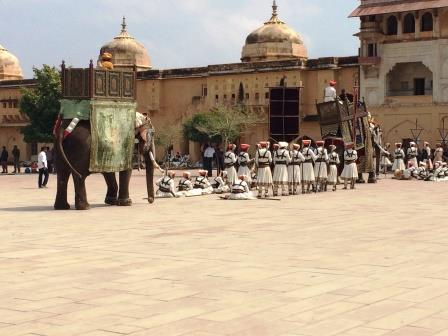 After an hour-or-so, I head off to explore the fort. I need no ticket as my combination ticket which I bought yesterday is good here. The Amber Fort is huge and my experience with tour guides in forts has been good, so I take one up on his offer. My guide, Manoj and I head up the stairs to explore the fort.

Built by Raja Shri Maan Singh JI Saheb in the 16th century, this fort is impressive in both size and decor. The views of the city and the hills surrounding it are fantastic. There’s a long wall resembling the Great Wall of China which extends for miles across the hills. We look out over the Kesar Kyaari, the garden on the water which the king had planned to grow saffron in but, apparently, the king had a black thumb and the climate wasn’t right for saffron growing. Still the garden, with its star-shaped patterns is beautiful. We move on to the Hammam, or

Turkish Bath. The engineering of the structure for heating, steaming, drainage and making it smell like rosewater is really incredible. It was good to be king. We see the Diwan-e-Aam (Hall of Public Audience) as well as the Sheesh Mahal (Mirror Palace), which is ornately decorated with carefully placed mirrors and mirror tiles. If you shine a flashlight (torch) on the ceiling of it, you see a reflection which looks like the night sky. And it’s traditional to have someone take your portrait at an angle through of the rectangular mirrors.

When we walk down, the filming is still going on, but it’s time for me to head over to the Hawa 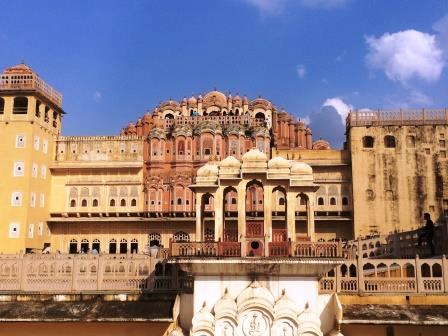 Majal (the Wind Palace). I enter with my combination ticket and rent an audio-guide upon. Constructed in 1799 by Maharaja Sawai Pratap Singh, it’s one of the landmarks of Jaipur. Its intricate five-stories are made from red and pink sandstone. The main purpose of this palace was for the female royalty to have a view of everyday life. As they never appeared in public, the screened windows carved from marble and sandstone provide a view out without anyone from below being able to see inside. It’s a design I’ve seen used throughout India.

The views over the city are fantastic and my favorite room is one filled with colorful glass windows which, when the sun shines through, reflect a colorful mosaic throughout the room.

After an hour, I depart the Hawa Majal and head over to the marketplace across the street. It seems to go on forever with a narrow inside section as well as shops lining the street selling shoes, clothing, food, and jewelry; lots and lots of jewelry. I stop in some shops and end up walking away with two sets of inexpensive earrings (the only things I can buy which take up little luggage space and weigh practically nothing. This market is somewhat chaotic but thoroughly enjoyable as, again, no means no. Still, I’m not very good at bargaining (I used to be, I’m not sure what happened) and am sure I’m over-paying.

I hop in a tuk-tuk and head to MGF, a mall I’ve been told about. It’s small filled mostly with shops that sell either traditional Indian clothes and household items, or flea-market type clothing and

other items. It’s here that I decide I must eat at McDonald’s. Why? Well, this is a country where cows are sacred and, therefore, beef is not eaten. While many may be of the opinion that beef is not actually what McDonald’s serves, literally translated, it is. I order a McPaneer Royale and fries. This is a sandwich made with Indian cottage cheese patties, lettuce, tomato and mayonnaise. The fries are fried in vegetable oil as there was a big stink here years ago when people found out McDonald’s cooked their fries in animal oil.

Before leaving the mall, I stop in the tiny Baskin and Robbins and get a taste of home through a mint chocolate-chip ice cream in a bowl. It’s the little things. (Stop by the Drop Me Anywhere Facebook page to see the best sign ever, which I saw in the mall.)

I hop in a tuk-tuk and head back to the guest house for a whisky nightcap with my host. Two good days in a row and I’m feeling stronger.

Tomorrow – a lost tuk-tuk driver and a walking tour of Jaipur.

Have you voted for the next Drop Me Anywhere destination? Well, do it again please. Remember, this is an interactive travel site. Tell me where to go! Vote

Joy in Jaipur These Streets Were Made For Walking