These Streets Were Made For Walking

After two great days in Jaipur, I awake cautiously optimistic. The plan for today is to grab a tuk-tuk, go back to the area of the Amber Fort to visit the Anokhi Museum of Hand Printing, wander around Jaipur for thirty or forty minutes, and wait at the Ajmeri Gate (one of the eleven city gates) to meet Vineet, my walking tour guide. Shveta from Jaipur Friendly Villa has recommended and arranged the tour with Jaipur Walks. Jaipur Walks (E-mail – Jaipurwalks@yahoo.com) offers seven different themed walks including Cuisines of Jaipur, heritage walks, religious walks, and a Jaipur bazaar walk (which is much different from a bizarre Jaipur walk). As he’s already got a walk scheduled for 3:00pm with three people who have requested a combination walk concentrating on Arts and Crafts with a little cuisine thrown in, I’m invited to join that one.

I walk up to Queens Road and hail a tuk-tuk. I tell the driver I’d like to go to the Anokhi Museum, have him wait, and then be dropped at the Ajmeri gate. To be clear, I show him the piece of paper on which Shveta has written the name of the museum, as well as point it out on the map. I ask how much and he says a phrase I’ve heard before, “Pay what you like.” I always agree on a price before getting in because I don’t want a fight on my hands when I get out as, what I like and what he likes are probably two different things. I say “300 Rupees, good?” (Shveta has told me this would be a fair amount.)

I climb in and we drive. On the way, I check my Indian phone and notice that I have a message. It’s from Vineet at Jaipur Walks informing me that the tour time has been moved up and will now begin at 2:00pm. Still I have time to go see the museum and be on time for the 2:00 meet..

We drive through the gate to the Pink City and, after weaving slowly through traffic for a bit (this guy’s tuk-tuk could use a tune-up), we stop in front of a museum, where he points to the entrance, as well as where he’ll be parked. I step out, a bit confused as we’ve passed through only one city gate, and I know that we must also exit the Pink City on the other side to get to the museum. I begin walking up to the museum, surprised that it’s so large, as I’ve been told I only need about forty-five minutes here.

In front of me I see a sign saying National Museum. The tuk-tuk driver has taken me to Albert Hall, a fine museum, I hear, but not the museum I was looking for. I walk over to the tuk-tuk parking area and tell my driver it’s the wrong museum. The other drivers come over and hold a conference telling him where the museum is. I get back in and we head through very dense traffic, out the city gate and up the hill towards the fort. I have doubts that my sad tuk-tuk can make it up the hill as it slowly chugs along. The only time it speeds up to a normal tuk-tuk speed is when we go downhill every once in a while.

After another half-hour, we’re up at the fort and my driver begins asking people on the side of the road for directions. We travel for another ten-minutes, asking four people for directions, when we finally arrive. Unfortunately, this leaves me barely fifteen minutes to check out the museum. In it I find beautiful textile prints from different areas of India, each area with their own special patterns and colors. There’s a presentation room which shows a variety of slideshows and movies about the art of block printing. I hear some pounding coming from the top floor and head upstairs to check it out. Up there, I find three people watching an older man sitting on the floor carving intricate would blocks. These blocks will be dipped in natural and chemical coloring hundreds of times to create beautiful prints on dresses, scarves, robes and other materials.

I wish I had more time to stay and appreciate all this tiny museum has to offer but, due to situations beyond my control, I head out the door, jump back into my sad tuk-tuk, and head down into the city.

Another thirty-minutes later, I arrive at the Ajmeri Gate and unhappily pay my driver the agreed upon 300 Rupees.

I tell him I have nothing smaller and he asks a fruit vendor next to us. The fruit vendor indicates that if I buy something from him, he’ll provide change. I tell the driver he must find change. He looks in his wallet and pulls out 180 Rupees. I take it while expressing my unhappiness with his ride and the fact that he now just made away with a 20 Rupee tip.

I weave my way through traffic to stand on a little patch of road not occupied by cars, motorcycles, tuk-tuks, bicycles, pedestrians, vendors or cows. I no sooner finish texting Vineet to ask exactly where at the gate I should meet him when he appears in front of me. Five-minutes later, it’s 2:00 and we’re looking for the other group. At 2:05, Vineet tells me to wait he walks around to look for them and I’m immediately surrounded by four people asking me for money. I say no and ignore them (if you take out any money, you’ll be surrounded by more). At 2:20, Vineet says he called the hotel the group was staying at and was told they’d left on time. Vineet doesn’t have their number as he’s been making the arrangements through their hotel. 2:30 comes and the people call him. They’re at the wrong gate. Vineet instructs their driver as to where we are and, fifteen minutes later they arrive.

I’ve already had a talk with myself about not allowing the bad tuk-tuk driver, the change in tour time, and the tardiness of the people who changed the tour time in the first place, ruin my attitude about the day. While I could have actually spent time exploring the Anokhi Museum, as we don’t actually begin the walking tour until 2:45, I know that this series of events could have happened anywhere (though I am a bit irritated that, when they finally did show up, the three didn’t apologize).

The party of three are Brits visiting India as part of a spiritual group. Jo, the only female has been to India a few times before, but never really explored outside of the Ashram. Patrick has been once before and Chris, like me, is new at this India thing.

We begin walking, making our way to a street lined with some basic shops. We stop and Vineet points out the architecture of the buildings across the street. While standing there, a pigeon overhead decides to relieve itself on both Vineet’s shoulder and Patrick’s pants. Aah, India.

We continue on weaving our way along and across highly-trafficked streets. Jo is very nervous about walking through the traffic and Vineet graciously provides pointers on how to safely (I use the term loosely) walk the streets in India. You walk slowly as it’s sort of a mass cooperation thing. As long as everyone can anticipate your moves, they will slow down, stop, or weave around you. It’s when you make a sudden movement that you’re in trouble.(And I think they smell fear.) 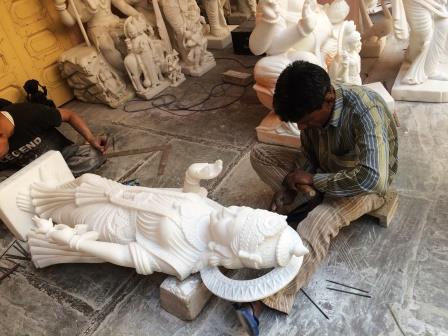 We head down streets where we see marble sculptures being carved and polished, molds made out of sand and molasses being made to create jewelry and metal products, and even the finest pickler in all of Jaipur displaying his pickles (sounds dirty; it isn’t). Along the way, Vineet buys us various types of local food to try. Jo is also nervous about this and declines the first few offerings. It’s funny that she’s the one with the most experience in India, yet she’s also the most cautious. Staying in the Ashram is a bit like staying in an all-inclusive resort; it’s nice, but you certainly don’t experience the local culture. Still, these folks are nice enough and, upon hearing that much of my time in India has been challenging, they tell me that I might want to think about heading up north as I’ll be warmly welcomed in the Ashram. It’s very kind.

After seeing the jewelry-making area, we walk onto the main road where Vineet helps me secure a tuk-tuk. I’m tired today, and full from the food tasting so I make it an early night at my comfortable retreat at the guest house.

Don’t forget to vote for the next Drop Me Anywhere destination. Vote Here!