The plan for today is to tour Old Goa with Elvis (the friend of the friend) and his brother Elston. I believe I’ve mentioned that I used to work on board cruise ships, and Elvis and Elston both currently do (as do many Goans). They’re from Goa and both happen to be home on vacation and have kindly offered to show me around. I stop by the outdoor breakfast area and order up a cheese omelet, some toast, fresh fruit and coffee (breakfast is included).

At 9:00 Indian time (that’s 9:30 real time, which works for me as the hard Indian bed has, once again, robbed me of a good night’s sleep) Elvis and Elston arrive and we head out to explore Old Goa.

Constructed in the 15th century, it served as capital of Portuguese India from the 16th century until its near abandonment in the 18th century due to a plague. Still, some remained and Goa gained its independence from the Portuguese in 1961 and became fully part of India. In 1986, Old Goa was named a UNESO World Heritage Site. 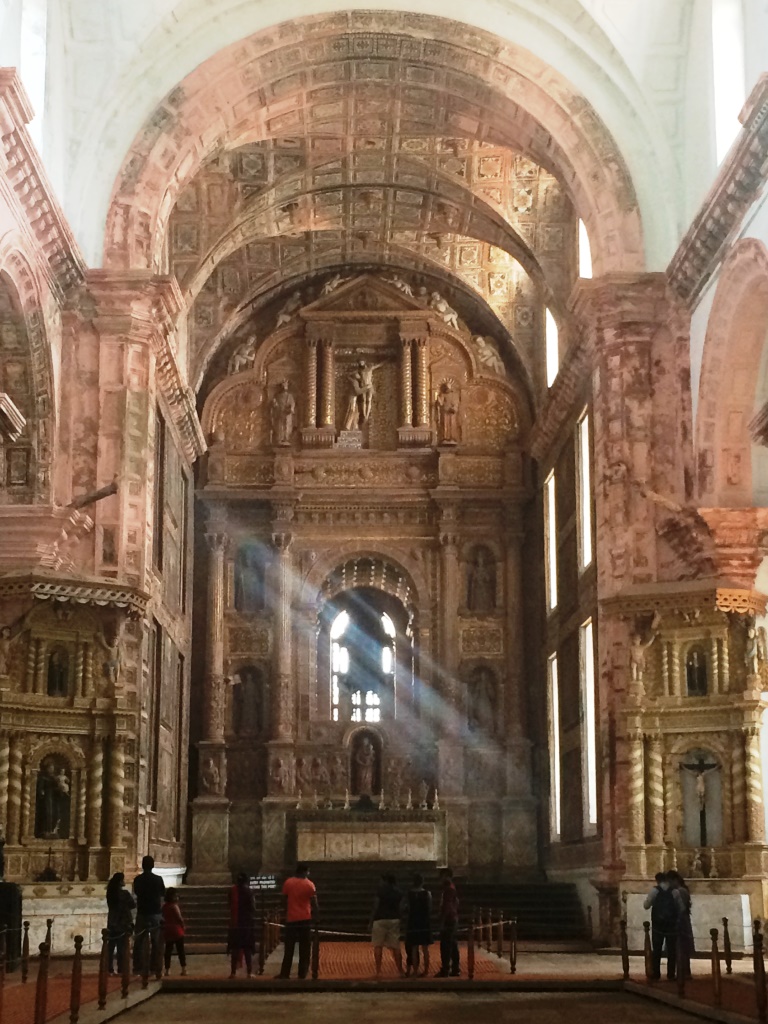 We stop first at the Bom Basilica where we see relics of days gone by. It’s difficult to see inside the religious service area as there seems to be a confirmation going on, but it looks beautiful. Due to the Portuguese influence, there are many Christians in Goa and, therefore, many churches. The Portuguese influence can also be seen in the architecture, décor and artwork.

Next, we make a stop at the archaeological museum which, while small (with no air conditioning) houses some spectacular relics displaying the intricate carving work which I’ve grown accustomed to in India. The second floor displays large portraits former Goan leaders which remind me of many of the portrait galleries I saw in Europe. 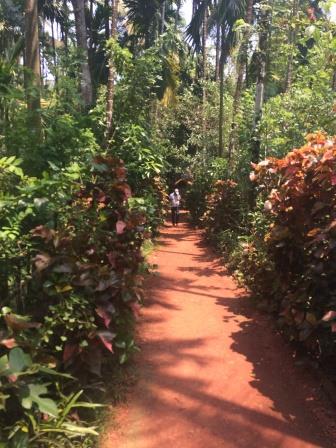 Next we head over to the Sahakari Spice Farm. After just a bit of trouble finding it (thanks Google Maps!) we arrive. Elston parks the car while Elvis steps outside to be sure he’s not parking under a tree with hanging coconuts which might fall onto the car. We walk up the road lined with beautiful palm trees, cross a bridge and are welcomed with flower leis as well as me receiving a traditional red

dot on my forehead. We’re invited into circular enclosures to take a seat and enjoy some spiced tea and crackers. After a few minutes, our guide, (who I nickname “Jungle Spice,” the forgotten Spice Girl) invites a group of us to walk with her into the jungle. She shows us different plants and explains which spice they produce, how they’re harvested, what the spice is used for – both for cooking and health benefits – as well as how expensive it is. We eventually walk to a tall palm tree where we’re given a demonstration on how to climb up to harvest its fruit as well as being invited to make our best attempt at climbing it (some in our group try; myself, Elvis and Elston offer moral support). 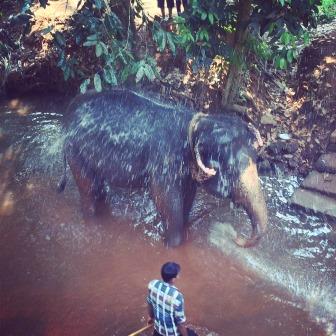 As “Jungle Spice” explains the uses of one plant, an elephant walks by. . . uh, yeh, an elephant walks by. It turns out that a slow walk for an elephant is a fast walk for a person due to their long gate. I’m not sure it’s safe to run after an elephant so, at the end of the tour as we’re invited to lunch, Elston and I take a detour through the jungle and head down to the river to watch the elephant enjoy the water with a guest on her back. She stands for photos looking a bit bored. I get closer for a photo as she turns towards me and, in slow motion in what seems like a 3D movie, her trunk moves towards me. I’m sure she’s going to suck my camera up into her truck and I back away, stumbling slightly over a rock. Enough elephant for the day, we head back to the lunch area.

Before entering, our guide, J.S. (we’re on a first initial basis now) has us stand by a small put from which she produces a ladle filled with a spice-spiked water which she pours down our spines. It smells like lemongrass and is really refreshing on the hot day. We head up to the buffet, with Elvis and Elston explaining to me what these local dishes are. While the food is great, the vanilla ice cream served at the end might just be the tastiest thing on this hot day.

The boys drop me at my hotel where I freshen up a bit before dinner. At 8:00 Indian time (8:20 for everyone else) they stop by and I climb into the car with the two of them, and meet Elston’s

girlfriend, Jessie, who is joining us tonight. Ten minutes later, we pull up to a 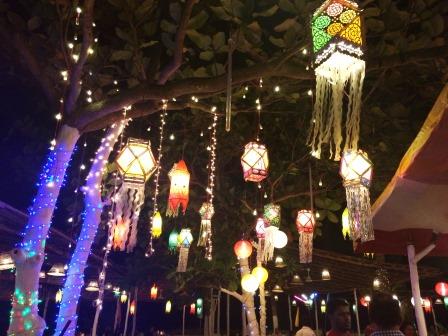 beautifully lit beach restaurant call Zee-Bop where we sit in the large, covered seating area under twinkle-lights and other hanging lamps, with our feet in the sand. We order drinks and Elvis chooses some tasty appetizers for us to share. Following those, Elston chooses his favorite dishes for us to try as we order one more round of drinks. The waves crash near us and the atmosphere, food, and company are perfect.At 11:00, we head back. I thank the boys for a wonderful day and evening. I’m definitely a southern girl in that I enjoy south/central India much more than the big cities of the north.

Tomorrow, one last day in India and a flight out.

Don’t forget to vote for the next Drop Me Anywhere location! Vote here!