It’s time for me to leave India. No, my visa doesn’t expire until April 5, but I’ve been here eighteen days, which is the third-longest I’ve been in any country on a DMA trip. And really, eighteen days is long enough for me. I’ll speak more on that in the last article on this location coming next. In the meantime, India has one last good and one last bad experience in store for me.

I’m flying Jet Airways from Goa to Bangalore to Kochi and then AirAsia from Kochi to Kuala Lumpur. I booked the tickets separately as I thought of staying in Kochi for a few days but, to be honest, I’m done with India.

After on last masala omelet for breakfast, I gather my bags to go to the airport. I’ve had trouble deciding how to pack my bags as Jet Airways only allows 15 kilograms (33 pounds) in checked bags and seven Kilograms (15 pounds) in carry-on plus a personal item. On AIr Aisia, for a small fee, I’ve purchased the 25 kilogram (55 pound) checked-bag option (my bag will hold 52 pounds, max) and, while they also only allow seven kilograms in carry-on plus a laptop, purse, etc., I’ve never known an airline to check this. Anyway, I’m trying to be kind to myself and accept that I might pay $50 again.

At 11:30am, my driver arrives to bring me to the airport. I ask him if he knows if paying a porter to bring my luggage to the counter might avoid some fees for me, as I was told by the British couple on my last flight. He has no idea what the hell I’m talking about. We arrive at the airport and porters are standing by. I decide to give it a try. I smile, ask the porter his name and tell him that I know my bag is heavy and I hope he can help me with avoiding some fees. My luggage is again X-rayed (weighed) upon entering the airport, my porter is given a piece of paper and we’re sent to the special line (darn it!). As we’re walking, I again ask if maybe he might be able to help me. We approach the Jet Airways counter and he and the man behind it have a little talk in Hindi and my bag is checked with no additional fee. The Magic Porter Trick worked! 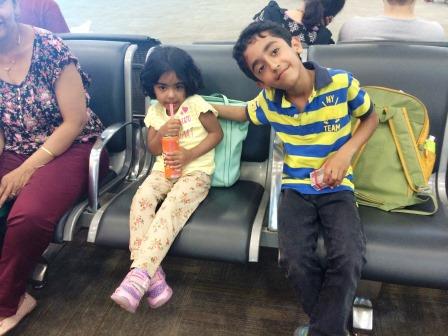 After arriving at my gate I spend some time chatting with Ekansh and Varya, a brother and sister who have been on vacation with their parents at the beach. Ekansh is having a great time teasing Varya as he has four straws for his soda and she only has two. She finds this incredibly upsetting and he finds this immensely satisfying. Kids are the same wherever you go in the world. Speaking about his sister, Ekansh tells me, “When I look at her I think she’s so cute. Then she speaks and I think she’s so bad.” Ah, big brothers.

After a while, I notice my flight number lit up on the gate monitor. My flight doesn’t leave for an hour so I step up to the gate agent and ask what’s up and am told they’ve begun boarding the flight (apparently they board very early here). I say goodbye to my new friends, tell Akansh to be kind to his sister, and head off onto the plane. No problems.

I land in Bangalore and walk towards my gate at the surprisingly nice, and very large airport. As I have at least an hour to wait, I stop to enjoy a vegetable puff (my India airport staple) at a little airport café. I play on the free WiFi for a bit while keeping an eye on my watch. At some point I notice the time on my iPad and see that it’s different than the one on my watch. Crap, my fun traveler’s watch which I bought in Budapest has stopped working! Luckily I caught it in time as it’s thirty-five minutes before my flight, and the doors closes twenty-five minutes prior to departure. I hightail it over to my gate and board the bus to take me to the plane.

This airplane is a small one and, as I board, I offer to give up my roll-aboard bag for them to put in the luggage bay as often happens on these types of planes. They’re incredible nice and tell me I can bring it on board and see if it fits in the overhead or under the seat and, if not, they can take it. I climb aboard and, while I’m assigned seat 4A, they invite me to take a seat in the back (where I entered) as the row is empty and I can store my bag on the floor in front of the window seat and sit in the aisle seat. I’m really fine with them putting it in the luggage bay, but they’re so darned nice that I’ll do it however they want.

An hour after take-off, we’re getting ready to land. A flight attendant who is commuting, not actually working, sits across the aisle from me and, when I ask her about transferring from the domestic to the international terminal in Kochi, tells me it will be no problem and gives me very clear instructions. Really, I’ll take Jet Airways again as they’ve provided such a great flying experience.

I head to the baggage claim, grab my bag, walk out the door and turn left as instructed, and walk into the international terminal. As I have a five-hour layover, and I’m aware that I can’t check my bag until three-hours prior to the flight (remember, I booked the tickets separately so my bags aren’t checked through to my final destination), I locate the Air Asia counter and grab a seat nearby.

Eventually the counter opens. I confidently lay my bag on the scale knowing I’ve paid for 55 pounds and my bag only weighs 47 pounds. I’m then asked to lay my carry-on bag on the scale. What? In all my years of travel, this is a first. I tell the man that I know it weighs more than seven kilograms. I smile and ask if he can work with me. Nope. I’m told that I need to remove two kilos. “Um, but what should I do with it?” I ask.

I ask if I can move it into the larger checked bag as, while it’s completely full right now, I’m underweight there and the bag expands. I’m told that will be okay.

I do the walk of shame over to an open space in the terminal, open both bags so that my life is on display, and transfer some shoes over to the checked bag. I have no idea how much two kilograms is in shoes, so I go with, some. While I’m doing this, a very nice man approaches and tells me he’s been in the situation before and he has ten extra kilos in allowance. He says he’ll check my carry-on as his as we’re both flying together. (Note: if I had known I could have paid for more weight and split it into two bags, I totally would have paid for more weight when I bought the ticket.) Yes, I know what they say about packing and checking your own bag, but I was with him the whole time so I know he couldn’t slip anything into it. We trade business cards, and, well, it’s an act of kindness and I’ve been a bit short on these from strangers in India.

He checks my bag and, when I go to check mine, I’m asked where my carry-on is. I tell the man that it’s taken care of. The man continues questioning me and I tell him that the other man has taken care of it. Supervisors are called, the nice man is called back up to the counter, we’re both told off (perhaps deserving). They take my bag from his luggage and assign it back to me. They then insist that the small backpack which my laptop and iPad is in be weighed. What? My backpack is my computer bag and that’s allowed. I;m then told that my Sony Vaio laptop is too heavy to be considered a laptop. I really must write to Sony to demand my money back for advertising their computer to be a laptop when AirAsia has clearly declared it not to be. The supervisor tells me the website says a laptop must be a certain weight. I tell him that I was on the website and it says no such thing. His response. “Who told you this?”

Um, what? Who told me what I saw, or didn’t see on their website? At this point it’s clear I will be punished and I’m told that I must pay $136 for my luggage. That’s $36 more than my ticket cost.

I’m done. Just done. I’ve had it with India and my overall experience. I ask if they take American Express and am told they do. I pull out my card and tell them to charge whatever they need to. Really, I’m done.

“You must pay extra,” he says.

“We will not take you bags unless you pay extra,” he repeats.

“You must pay extra for the bags,” he repeats.

He looks at my card and says, “We only take Visa or MasterCard.”

Did I not already ask this?

I whip out the MasterCard and am taken to a separate room where he continues to scold me for my extra bag while charging my card. Yup, my exit from India pretty much sums up my experience. I’m done.

Tomorrow – The Good, the Bad and the Thank-yous.

Last day to vote for the next Drop Me Anywhere destination. Where will you send me? Vote here!