The Good, The Bad and The Thank you’s – India

It’s time for the final article on India (actually, well-past time thanks to a crashed computer which will cause my ever dwindling funds to dwindle further). This is where I tell you what was good and what was was not-so-good, as well as thanking those who helped me along the way. I also provide all of the links in the articles on India in one handy space. It’s a great one to bookmark if you ever hope to get to India. I normally include a costing sheet which tells you how much I spent on the trip so that, if you ever do a similar trip, you’ll have an idea of how much to budget. I’ll not be doing this for India as, well, you’ve heard the term, “prices may vary?” In India, prices will vary. Except for food, nothing is a set price. It will vary according to the person selling, the person buying, the time of year, the year itself, how good you are at negotiating, the color of your skin (yes, sorry to say this is true), or simply how the person selling it feels that day. So budget? Throw that out the window. Suffice to say, if you think India will be cheap, I can tell you that wasn’t exactly my experience.

The Good
It’s India! I’ve always wanted to go and now I will not die wondering what it’s like and regretting that I never went.

mosques and temples everywhere mixed throughout neighborhoods. In some areas (more down to the south), you’ll even find churches and a synagogue. Still, there is an undercurrent of non-acceptance and religious divide, and even some violence.

It feeds its poor – The poor gather around areas with

lots of temples as the temples distribute free food daily for anyone in need. It would just be great if there wasn’t so much poverty and if the government did something.

Life is good. . . if you’re a cow. Cows are sacred and not to be eaten (though down in Goa and south it’s a different story due to the Christian influence as opposed to the Hindu one). In some cities, a different day of the week is designated to feed a different color cow. This way the cows don’t go hungry.

Dwarka – This resort is a vacation from the noise and constant harassment to get you to buy things or simply give people money. There is no litter piled in the middle of the streets as, there are no streets; it’s sand! 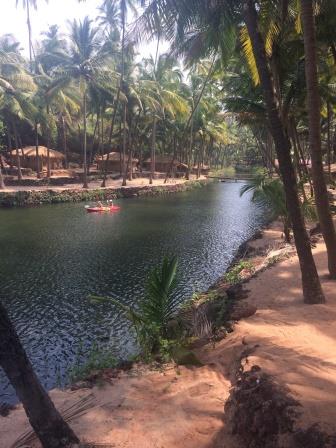 The Bad
Pollution, pollution, pollution. Trash piled a foot high in the middle of many streets, and scattered about on others. Noise pollution in the form of the constantly honking traffic as it’s considered, well, considerate to honk your horn to let someone know that you’re driving behind them, next to them, in front of them, or simply that you’re driving at all. Air pollution as, if it’s not thrown in the street, much of the trash is burned. Fires are also used for cooking and craft-work. Even at Dwarka the air pollution was fully present, as was some water pollution.

My fake wedding ring – it turned my finger green

My fake husband – he came in handy here and there as he’s an Engineer and was working in Belgium but “joining me tomorrow” as my story was told over and over. We have two kids. But he never bought me a ring that didn’t turn my finger green.

The attitude towards westerners. It’s like the cartoons where the man blinks his eyes and you see $$ in them. That’s how westerners are viewed by many people there. You will be asked for money and people will attempt to cheat it out of you. Sorry to say, but that was my experience.

Cleanliness, or lack thereof. It’s dirty. The train stations are dirty, the restrooms are dirty, much is dirty. Most of the guesthouses which I stayed in were clean, one was okay and one hotel was downright dirty.

Booking accommodations online. Many hotel and guesthouse owners have taken to bashing their competition on Trip Advisor and other sites. They’ve also loaded the sites with false good reviews of their own properties. Proceed with extreme caution. And three-star in India, is very different than three-star in other places. Three-star more likely means one or two-star.

Travel without a plan. Yup, I said it. While this whole project is about travel with minimal planning (m preferred travel style), India is not the place to do this. Have a plan. There’s supposedly a round-about way non-Indians can book a train online, which I’ve been told is through a specific website and is time consuming, frustrating and involved. Non-Indians cannot book a train through the national website as a PAN number (the national ID number) is required. You must have an agent or local person do it for you, or go to the train station in person. Trains fill up well in advance and it’s difficult to book a train less than a week prior. Finding India Someday was a helpful thing for me and you should either use them, or talk to people who have used an agent and been happy with their service.

Traveling solo. Don’t do it in India; especially if you’re a woman. If you have white skin, you will not receive any good deals and stand a good chance of being harassed. Going out at night in many cities is not an option. For a woman, overnight train travel is not recommended for safety reasons (some train routes only travel overnight).

Air Asia – While they’re a low-cost airline (I didn’t realize this when I booked with them), this does not give them the right to be less than transparent with their policies, to change any disclosed policies on a whim, or to treat their passengers with no respect. Following my bad experience with them, I met an Indian couple who just had a similarly bad experience with them in regards to luggage fees. No matter what their ticket cost, I do not recommend them. You will most likely end up paying more in the end simply because the agent feels like charging you.

The starving child scam – okay, scam or not, it’s a bad thing. There’s a real divide between rich and poor here. There is real poverty in India. Still, there’s a scam where people work for men (basically pimps) and are sent out into the streets in dirty clothes to beg for money. Children are employed and, rumor has it, some women have children so that they can go out into the streets and beg for money to support the family (people are more likely to give money to children). I’m told by various people that many of these people live quite well and eat better than me. True or not, the poverty is terrible.

Corruption – India is not a country at war. Countries like Syria, Afghanistan and Iraq have hope, as they are at war and they hope that someday, when their wars end, their children will live a better life. India is not at war. There is no excuse for their major issues. Their government should be ashamed.

The Thank You’s
Thanks to Dann, my fellow guest at the Tree of Life Guesthouse in Delhi. Your guidance and support were invaluable.

Thanks to Abbas at India Someday. This is a company you should talk to if you’re planning a trip to India. Like I said, do’t do this place unplanned. India Someday will help with as little or as much as you want. While they were kind enough to offer their services to me in kind, I came to realize the value of paying their consultation fee and having them pave the way. Think of them as your “fixer” as it sounds kind of exotic.

Thanks to the Tree of Life Guesthouse and Jaipur Friendly Villa. You made the going easier by providing more than a place to stay, but guidance and advise. And thanks for negotiating tuk-tuks, SIM cards and many other things that, unfortunately, you can get better prices on than me simply because I’m not Indian

Thanks the staff at Dwarka. As I said, you were an oasis in a desert of noise and craziness.

Thanks to When In India, who was kind enough to include me on their Old Delhi Rickshaw Tour without charge so that I could tell you how great it is. It really is something you should do as this will help you appreciate, and even like,

this area. The history is explained as you’re touring it and you’ll love the spice market, the stop to taste food and the colorful streets which your bicycle rickshaw driver takes you down. Worth it.

Thanks to Elvis and Elston. I truly can’t thank you enough for your generosity and kindness. You made the end of the trip better than many other parts and I gained new friends.

As always, thanks to you, my Virtual Travel Buddies, for reading and voting. Not every location will be a place I wish to return, but every damned one is a learning experience. On April 15, I leave to learn about Indonesia, and more about myself. I sure do hope you’ll join me.

Hawa Mahal (Palace of the Winds)