Gina leaves today and I go back to traveling solo and, after one last breakfast together, we say goodbye and I grab my luggage and head off to the Kampung Ubud Hotel and Spa, just a few doors down, to drop my bags while I go to explore more of Ubud.

First things first; the other day I passed the Bali Animal Welfare Association (BAWA) which, at the time, was closed. I thought they might have a volunteer opportunity available and made a note to stop in and check as I’ve wanted to do some volunteer work with an animal welfare agency. I head down that way and, when I arrive, there’s a note on the door that they’re out to lunch. There are some dogs hanging around, but they don’t seem to know when someone will be back and, if they do, they’re not barking. As BAWA is directly across the street fro the Monkey Forest, I decided to hang down at this end of Monkey Forest Road (yup, the real name) to visit the Monkey Forest while I wait.

I pay my fee of IDR30,000 (about US$2.32) and take a minute to read the sign. It’s important, as the monkeys are known to steal any loose items and, darn it, I want to know how to react if a monkey jumps on me. (I also want to know if there are flying monkeys here like in the Wizard of Oz as those things scare the bejeezes out of me.) I tuck my sunglasses into my small purse which is strapped across me and ask the lady at the ticket office if she’ll hold my water bottle.

The thing about the Monkey Forest is that you really don’t need to enter to see monkeys. They hang out on the street in front and, if you happen to have bought some food and are walking down the street minding your own business, you may end up losing your lunch to some monkey thieves. If this were Disneyland, they’d bring it to the next level by having the monkeys direct you into the parking lot. 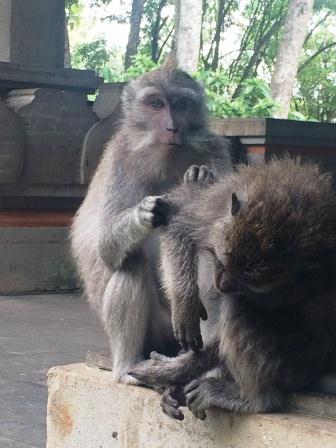 I enter the jungle, and the paths and good signage to help me find way. Staff is posted everywhere in order to help with your directional needs, In reality, there’s a large amount of staff and it’s easy to recognize that it is because there are supposedly Close Encounters of the Monkey Kind daily, and some end less than well for the humans involved. Some of these encounters are due to people behaving badly and some are due to monkeys behaving like, well, monkeys. 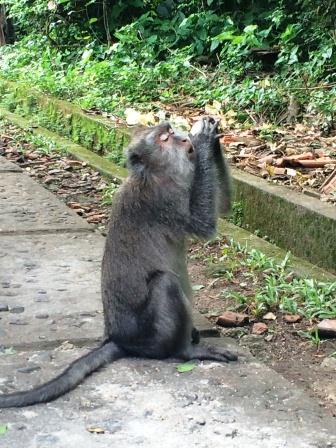 While walking through the forest I get to see monkeys eating bananas and eggs, swinging from vines over a river, playing with plastic bottles (in this case it’s less from human’s littering and more from monkeys thieving). Monkeys are grooming each other, nursing their babies and well, two are sharing some monkey-love right on the edge of the path for all the world to see. 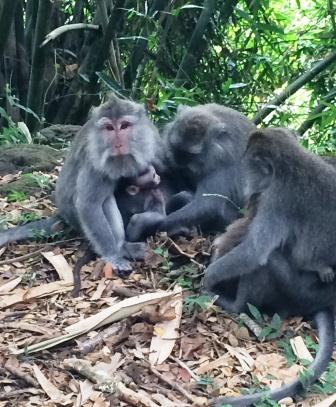 I also stop by a couple of the temples located in the forest but don’t enter past the gates as they’re not for touring, but for praying, and you must be wearing a sarong in order to enter a temple here. As thunder begins to roar in the distance, After two hours, with thunder rumbling in the distance, I say goodbye to my new monkey friends and head to the exit.

I stop by BAWA where I spend a bit of time speaking with a lady named Tanti who tells me about a school visit she’s doing tomorrow to help educate children on caring for animals. She tells me that, if I get approval from the manager of BAWA to come with, I can catch a ride with her.

I head back to the hotel and just get the E-mail out when the WiFi goes down. Aah yes, here we go again. It’s been my experience that most places in Asia guarantee their reliable in-room WiFi, yet few come through on that promise. I speak with a lady at the front desk who says they’re turning off the router and resetting it (which I come to learn to be untrue as the ladies later tell me they have no idea how to turn-off or unplug a router) I grab my computer and find one of the many restaurants here with both WiFi and music to enjoy a lovely fish dinner cooked in a banana leaf, before heading to bed.

Having been turned down via E-mail for the BAWA volunteer work, as they need prior approval to bring volunteers to a school and, as I didn’t have time for a rabies vaccine before leaving the U.S., I’m not allowed to work with their dogs or cats, I have a breakfast of a banana pancake (not nearly as nice and filling as the last hotel, but this one is only costing me about $27.00 per night), climb on the front desk to teach the ladies how to unplug their three routers above it and smile at them when the WiFi pops on. The ladies there tell me they don’t know how to use it and there are no boys in today to do it. I explain that they’re smart enough and can easily do it and they begin giggling. Sometimes I find it difficult to accept the views of other cultures.

I stop by a place which I passed the other day in order to inquire about volunteer opportunities and wind up having a long conversation with the manager there. We agree that I’ll return later this week to help out and I head off to find the museum I’ve heard about. On the way, I pass a sign pointing down an alleyway indicating a library somewhere down there. At the end, I find both the tiny Pondok Pekak library as well as a sign for a variety of classes. Through the library, you can have private instruction in Balinese dance, fruit carving, silver making, artwork, wood carving, and more. I ask about the silver making and wood carving classes and, after one phone call, the lady tells me the wood-carver will come in an hour to give me a lesson. Perfect!

I go to grab some lunch and a man peeks his head out of the library.

“Are you the writer?” he asks.

“He tells me his name is Mike and he’s an Australian-British anthropologist now living in Timor. He’s only here in Bali as it’s the closest place to get his Apple computer repaired. He road his motorbike to be picked up by a bus for a five-hour ride to catch a one-hour non-regularly scheduled flight to get here. I’m feeling a little bit wussy for complaining about my recent computer problems. We spend a few minutes talking about the politics of the region. It’s one of those interesting travel-character encounters.

Mike and I bid our farewells and I head over to grab a burrito (this Arizona girl is going through burrito withdrawal) which is somewhat similar to a burrito, before wandering back to meet the wood-carver. 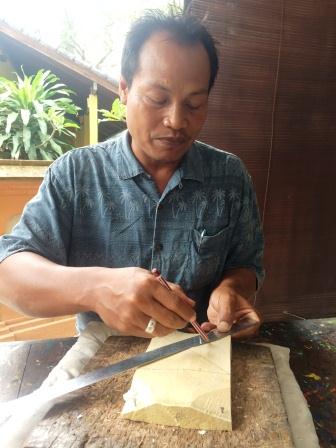 His name is Kadek Astama – Kadek means he’s the third born. He tells me that “I” before the name means it’s a 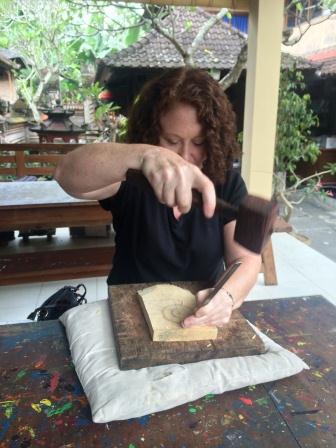 boy and “In” means it’s a girl. He saws off a piece of wood and nails it to a larger border before placing it on a pillow in order to work. He draws a simple pattern and instructs me where and how to tap mallet on a carving chisel. He shows me a piece he’s made with the same pattern and tells me mine will be, “Same, same, only different.” I have a feeling this is his way of telling me that, while his might be the Mona Lisa of carving, mine will look like Dogs Playing Poker.

Kadek tells me that he is a fourth generation wood-carver and his wife and two kids are also wood- carvers. His son though is going into graphic design – still artistic – while his twenty year-old daughter wants to be doctor. He confides that he’s just a bit disappointed (as any parent would be when your kid informs you that they want to be a doctor).

We chat away and carve for three hours. Kadek laughs at me each time I split the wood when I hit the chisel too hard with the mallet telling me, you can’t let your emotions take control of the mallet. When I point out that a part he has completed is much better than mine, he points out that he’s done this for forty-seven years.

I have such a wonderful time learning from, and chatting with Kadek. This is something you should do when you’re here. The E-mail contact for the library is librarypondok@yahoo.com and Kadek’s direct E-mail is kadekastama_ubud@yahoo.com. His family is also well-known for making theatrical masks so, if you happen to need one of those, he can make it and send it to you.

I thank Kadek for a wonderful experience and head off to grab a quick dinner before retiring for the night.

Don’t forget to vote for the next Drop Me Anywhere location right here!

Lost in the Jungle I See Dead People