I’d planned to have an easy day today; sleeping in, working, maybe some shopping. But Mare, who I met yesterday while viewing dead bodies (you know, just a normal way to meet people), and I made contact via Facebook and she invited me with her to see some temples. When traveling solo long-term, it’s always nice to connect with someone who speaks your language. And, this is what travel without a plan is all about – the willingness to change whatever plans you have, even if those plans are no plan at all, to do something which might be terrible or might be amazing. You’ll never know unless you do it.

As Mare has rented a motorbike through her hotel for the last three days, I do so through mine and, during breakfast, a guy rolls up on my bike and into the hotel restaurant (they don’t seem to mind). We complete the official paperwork (a half page), and I inspect the bike. I note that there’s absolutely no tread on the back tire and tell him I’d like a different one.

“You’re just renting it for one day, yes?” he asks.

“It should be good for one day. Call me if there’s a problem.”

“Um, no,” I tell him, thinking, Well, maybe I can if they’re able to stop the bleeding caused by the inevitable accident long enough for me to pick up a phone.

As he only has one bike, he brings me to his friend who rents me a bike for approximately $4.64 for the day.

I should note that, before I left the U.S., I went to the AAA office, paid my $15, and walked out with my International Driver’s Permit. This is officially required to rent a vehicle here. It’s also something they don’t always check for but, if you run into a police checkpoint, you’ll need to show it or be required to pay a fine on the spot. Like most things, the amount of your fine is negotiable.

Mare picks me up at 10:00 and we head off down Monkey Forest Road for a day of adventure. The bike takes some getting used to and my fear takes some overcoming. If you recall my admission in yesterday’s motorbike adventure (read it here), I have a fear of steep hills. But even before we get to any steep hills, I must negotiate my way through Ubud traffic. (What? Nobody told me there’d be other cars and bikes on the road!). In the U.S. we’re taught that, as the left handbrake controls the front wheel, if you don’t want to go flying over the handlebars, you always use the right one first. Well here, besides driving on the left side of the road, the brakes are reversed. As we approach some stopped traffic, I hear the voice in my head screaming, Left, first! Left first! My left hand squeezes the brake at the same time my right hand guns the accelerator. For just a few seconds, it’s like a battle of good versus evil. Good finally triumphs and I come to a less than graceful stop.

We continue riding our bikes up and down one or two fairly steep hills. I take deep breaths and feign confidence as I scoot up and down. About a half-hour later, we arrive at the rice paddies, where we take a seat on the ground at a traditional table of a Balinese café overlooking the paddies order a coffee and chat while enjoying the spectacular view. We then hop back on hour bikes and head off to our next stop, Tirta Empul (the Holy Water Temple). 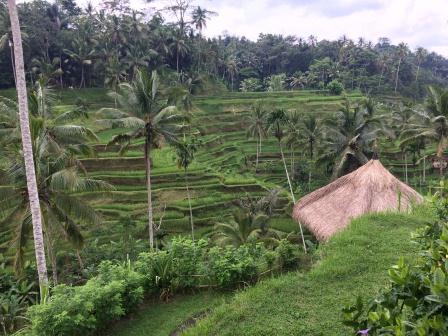 When we arrive, we park our bikes, pay our entrance fee, and are immediately accompanied by a man who

calls himself the Temple Keeper. It turns out that his name is Kadek and he’s a very smooth-talking tour guide whom we later nickname, “Cheeky.” When we ask if he’s a guide and what his charge will be, he says 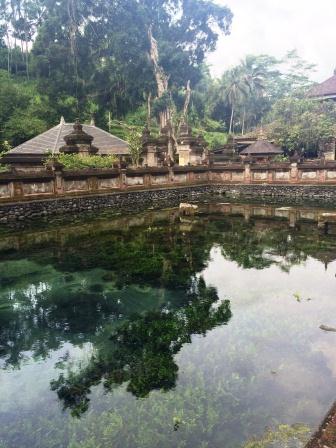 Kadek helps us rent sarongs (available if you forget yours) and walks us through the temple showing us statues and pools along the way. He explains that the Temple was built in around 950AD and its waters are spring fed and help to cleanse the body, mind and spirit. As we approach the main pool section, Kadek explains what each of the three sections means; the first is about yourself and letting go of things, the second is finding forgiveness for others and yourself, and the third is about meditating on your future. Each of these sections is fed by water shooting from sculptures along the side.

Kadek assist us in renting our bathing sarongs, and very gentlemanly, holds up the sarongs while averting his eyes as we remove our clothing underneath. I appreciate this as Mare and I have both noticed that our new friend seems to have taken a shining to me and spends some quality time flirting. As we exit, rain has begun to pour down and people are gathering under a shelter. We join in for a bit when I mention that we’re just going to the pools to get wet anyway. It turns out Kadek doesn’t want to get wet so I disappear back into the locker-room, pull out my umbrella and we head off to the pools. 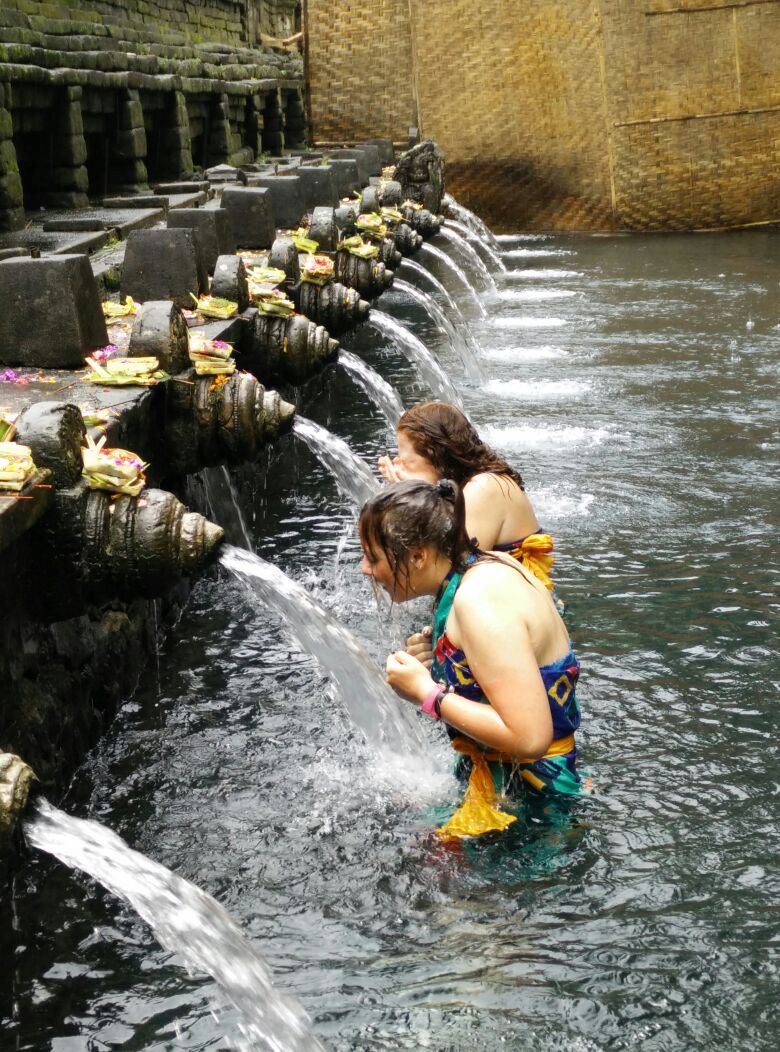 As everybody is hiding under the shelter trying not to get wet, we’re the only ones at the pools as we wade into the chilly waters and up to the shooting fountains. As the water pulls our sarongs not so discreetly open, we tuck the bottoms between our legs and waddle through the water like ducks on land. We’re instructed which ten fountains in the first pool to approach and told to gargle with the water three times, scoop the water from the fountain in our hands three times while bringing it to the top of our heads to wash over us, and then put out entire head under the fountain. We do this ten times in the first pool before moving on to the second and third pools where there’s a similar process, only with counts of seven. Also, at the second and third pools, we’re supposed to both gargle and drink the water, but I’m currently conquering my fear of this bike on these steep hills and I can’t possibly be expected to conquer my not-so-outrageous fear of drinking this water at the same time.

After completing the cleansing ritual, we’re told to step out of the pool and sit on a bench at the end to meditate. Mare and I sit next to each other and close our eyes. The air is filled with the bells of Gamelon music and thunder. (There’s a ceremony happening for someone who was cremated thirty days ago.) I lose myself in meditation while the sounds fill my newly cleansed soul. When the music stops, I open my eyes in awe of the truly spiritual moment I’ve just had. What’s wonderful is that, in that moment, Mare also has an incredible spiritual experience. It’s wonderful to experience it, and even more special to do so with a new friend. 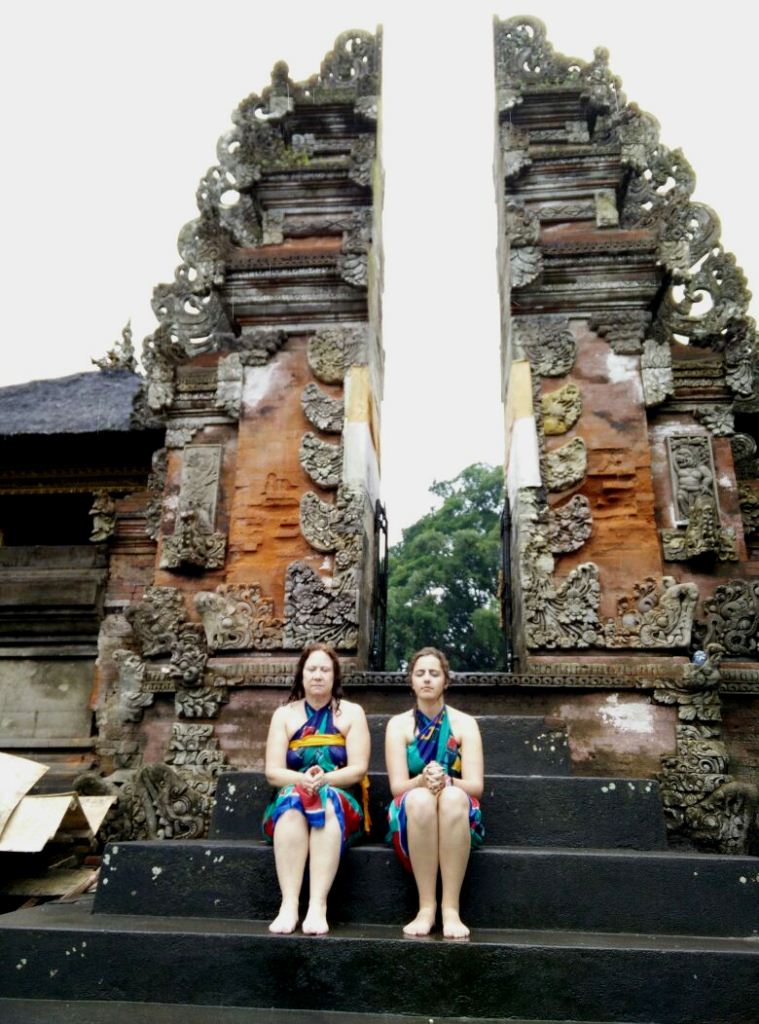 As it’s still pouring rain, we express our gratitude to Keduk over a hot glass of ginger tea before saying our 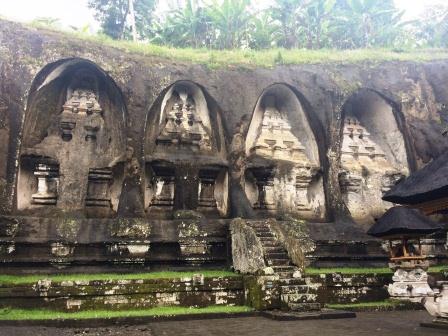 goodbyes. We throw on the rain poncho’s which we’ve both brought (really, their basically trash bags with arm holes) and ride just a few kilometers before arriving at Pura Gunung Kawi (the Rock Temple). This is an unconventional temple set into the lush, jungle hillside. The enormous stone carvings are part of the hillside, and streams and waterfalls run through it. We walk down, what we’re told is three-hundred steps to explore it. Along the way, there are opportunities to purchase souvenirs (they offer from their booths, but aren’t pushy). On the way up, Mare does a bit of shopping as she needs to bring home souvenirs to family members. And, speaking of members, she purchases seven of the wooden penis-shaped bottle openers I’ve previously spoken of. The lady selling them states, “They can be used to open bottles.”

“Yes,” I say. “And what else can they be used for?” I ask, attempting to get her to say the words.

She giggles and says, “They are penis.”

So, with her seven penis bottle openers – we’ve now nicknamed her the Goddess of the Seven Penis’s – we hop on our bikes and ride to out last stop, Goa Gajah. 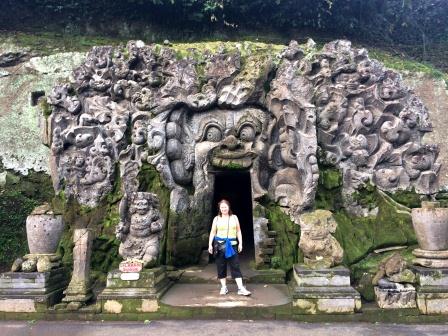 Goa Gajah is small compared with the rest of our locations today and much less impressive. There’s a cave and some sculptures, but neither of us is very impressed. The only excitement here comes from my getting asked out on a date by the parking attendant. We choose not to spend much time here as we want to return before dark and, after our amazing spiritual experience this morning, we feel like it’s been a day well-spent.

Want to E-mail Kadek and have him be your guide? You can contact him at kadek.ipang@yahoo.com

Tomorrow – An end to a great day and another wet day.