After returning to town, soaked with water, yet thankfully not with blood, Mare and I drop our rented motorbikes at my hotel – hers on the street in front, and mine parked just inside the restaurant, which they don’t seem to mind at all. I phone the guy I rented it from to tell him I’m finished for the day and he tells me to just leave it inside the restaurant and he’ll come pick it up later. This gives new meaning to the terms drive in and on site parking.

It’s 5:30pm and neither of us has eaten since our small breakfasts. We’re famished and we head up the street in search of good food at cheap, Bali prices. We stop at a few shops and wander through the art market, as Mare’s a bit obsessed with checking out the prices on souvenirs she’s already purchased as she wants to know if she got a good deal. She’s disappointed when she finds some at cheaper prices. She wants to buy the same things again at these places just because they’re better deals. I’m the voice of reason today (I know, life is full of surprises) and talk her down. I also talk her out of buying the woven pointy-top hat which they wear in the rice paddies as it won’t pack well and she’d need to wear it on every airplane, train, bus and boat during the rest of her travels. And the hat screams out, I’m a Tourist!

We head over to simple restaurant to eat, her, a traditional noodle dish which costs a whopping $3.00 and me, the higher-end fish dish for a splurge of $5. Top that off with my Lassi (a traditional yogurt and fruit drink) and my bill comes to $7; eating in Bali is cheap. What’s not cheap is drinking in Bali. Well, that’s not exactly fair as the drinks would seem cheaper if not in comparison to the food. But it’s difficult to pay $7-$10 for a glass of wine when you’ve paid $5 for your food. And a $25 bottle of Ernest and Julio Gallo from the Circle K (there are quite a few of them here) is definitely not cheap. 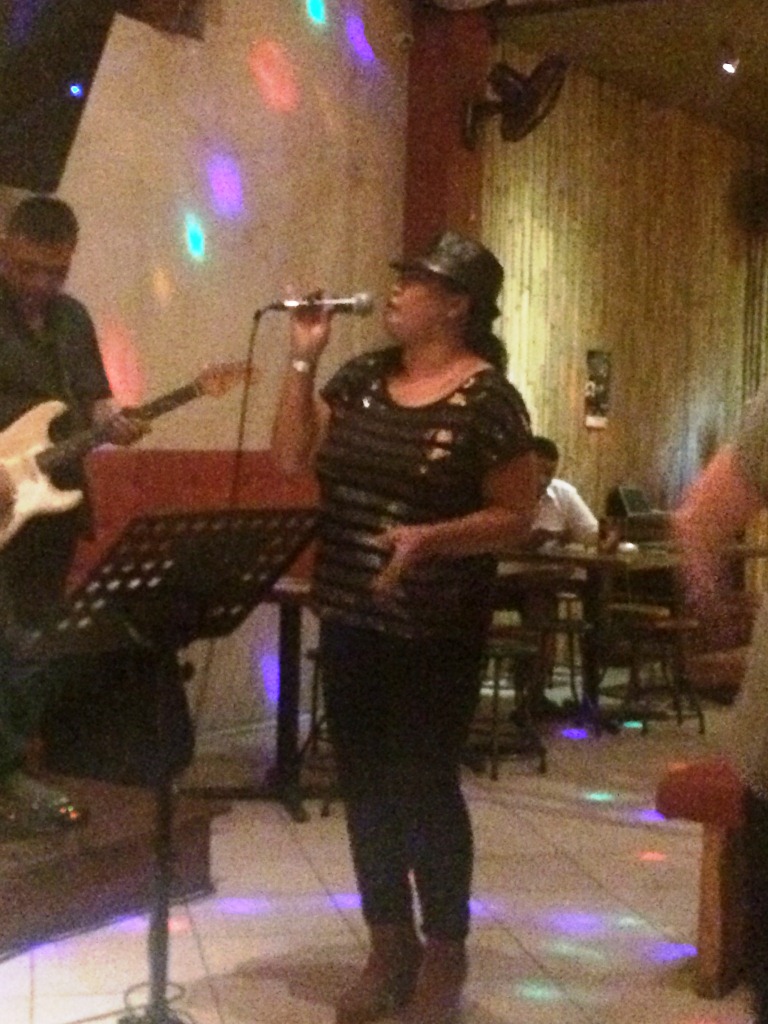 After our early dinner, Mare and I wander down the street to the Laughing Buddha to share drinks over happy-hour prices. I’ve mentioned this place in a previous article as I’ve been a couple off time to enjoy the great jazz and blues. Tonight, the band Soul Brothers is playing. Their singer, an Indonesian woman (apparently she’s a brother), belts out a variety of older pop songs, classic blues and smooth jazz in a powerful alto voice strong enough to bring in crowds of people after us and a few couples onto the dance floor.

With the day’s excitement making us sleepy, and an early morning for Mare (she has a 7:00am bus pick-up from her hotel to catch a boat to Gili Island), we walk down the street, pick up her motorbike, and thank each other for the unforgettable day. I head off to get ready for my own early morning pick-up to go white-water rafting.

I’m ready at 8:30 the next morning when the driver pulls up to collect me. We stop to collect four more people and drive another ten-minutes or so to our rafting spot. The four who have joined consist of two childhood friends from France, Arnaud and Nekolas, and their wives Aan (from Jakarta) and Stephanie (from France). Arnaud moved to Jakarta ten years-ago and met Aan, They moved to Ubud, in Bali, a few years ago when they got tire of the party scene in Jakarta.

We step up to the counter, pay our money and are shown the locker-room where we’re handed our helmets, paddles and life jackets and are instructed to leave anything we’d like in lockers. We meet our guide SheeBack who offers to put anything we want to bring on the river in his waterproof bag. I debate whether to put my iPhone in the bag to take some photos but, after my tech issues of the last month, I will surely go crazy if something happens to it, so I decline. (This is why you’ll have to use my words and your imagination.)

We’re instructed to follow another group down a path which, at first glance, seems simple enough but, ten-minutes later, as we’re climbing through the jungle down long uneven steps and muddy paths, with no sound of the river heard, I’m grateful for my paddle which has now become a walking stick. After approximately twenty five-minutes (and much praying that we don’t have to come up a similar path upon the completion of our trip), we reach the water.

As a former adventure tour guide, I’ve rafted many times. I’ve tasted the river-water in Tennessee, Alaska, West Virginia, Georgia, Pennsylvania and Canada. Tourism here is a bit different as, when we finally get down to the river, Sherpas are still running up the path (Running? Are you kidding me?) to grab deflated rafts and bring them down. Once there, they hook their tiny leaf-blower (I kid you not) up to the generator and begin inflating the rafts one at a time. One at a time, the rafts are placed in the river and a group is sent off. While standing on the riverbank, SheeBack begins giving us instruction on commands he’ll be giving in order for us to keep our raft from slamming into huge boulders.

He begins by asking, “Can you all hear me in the back?”

“Great.” He continues talking but his voice is now drowned out by the sudden start up the leaf-blower. We squint our eyes in an attempt to hear his instructions (does squinting help your hearing?) and nod our heads as if we understand. We’re anxious to get on the river.

Finally, our raft is in the water and we’re told which seats to take. In our raft, there’s the original five of us from the pick-up van plus our guide SheeBack. While this is a reputable company (I’ve booked it through my now-regular guide Dewa), I wonder why the guides have no rescue rope bags which are part of the normal gear for guides in the U.S. Still, I know that today’s trip doesn’t include huge rapids and am not overly concerned. As soon as we’re settled and set off down the river, we’re bombarded with water from a group of rafters passing by. Water wars have begun.

We spend the next two hours alternately floating and paddling down smooth sections and rapids while engaging in splash fights along the way. The scenery is incredible. We’re in the middle of the jungle, waterfalls plummet from above and, every once-in-a-while, we spot a monkey swinging through the trees overhead. We stop at one fully-flowing waterfall, climb out of our raft and take photos of each other getting smacked on the head by the powerful waters. After climbing back into our rafts, we navigate the river for a bit longer until our next stop at a riverside shack where groups are gathered around ladies selling sodas and beer. After a tasty Bintang, we climb back into our rafts and head down the river towards our take-out.

After exiting, we’re instructed to follow the other groups up the path. We climb. . . and climb. . . and climb. Grateful for my paddle/walking stick once again, I power through, happy for my hiking experience. I encourage those who have stepped aside to catch their breath and give a thumbs-up to the sherpas (all seem to be women on this end) who, not only drag their bodies up this hill, but carry deflated rafts on their head (I feel so inadequate).

After changing my clothes in the shower-room (which sure reminds me of the prison in the movie Midnight Express), I’m happy to be dry, and step into the main area to enjoy a nice buffet lunch. While eating, the skies have opened and the rain is unrelenting.

As we exit, I thank SheeBack and hand him a gratuity for keeping us safe while showing us a good time (Enjoy the ride? Tip the guide). We climb back into the van for the short ride to our respective hotels, say goodbye to each other at the drop offs and I enjoy a hot rinse in my crappy hotel shower.

Want to book a rafting trip like this? You can contact my favorite guide Dewa at and he’ll get you a good trip and a good rate. Dewastarr@yahoo.com

Now that we’ve Rocked the Boat, let’s Rock the Vote! VOTE HERE for our next Drop Me Anywhere destination.