It’s time again for me to bid adieu to my current location – Kuala Lumpur – and head off into the sunset (sunrise?) to your next choice of destination – Vietnam. More specifically, you’ve chosen for me to ride the Ba Na Cable Car, just outside of Da Nang. But, as I think we all should know more about Vietnam, I’ve bought a plane ticket to fly from Kuala Lumpur to Ho Chi Minh City, aka Saigon, and, in nearly a month, I’ll fly from Hanoi back to Kuala Lumpur (roundtrip tickets from Kuala Lumpur are fairly inexpensive). At some point, I’ll take a train to Da Nang, and then continue on to Hanoi. For the geographically challenged (hey, I had to Google a map of Vietnam too), I’ll be flying into the very south of Vietnam and flying out of the north. Since it will be a whole month, I’ll update you often, but might go a day or two in a row without saying something as, well, this girl needs her beauty sleep.

My ticket with Vietnam Airlines was originally for yesterday. One of the many things I did while in Kuala Lumpur was to go to the Vietnam embassy to apply for my visa. (One of the other things I 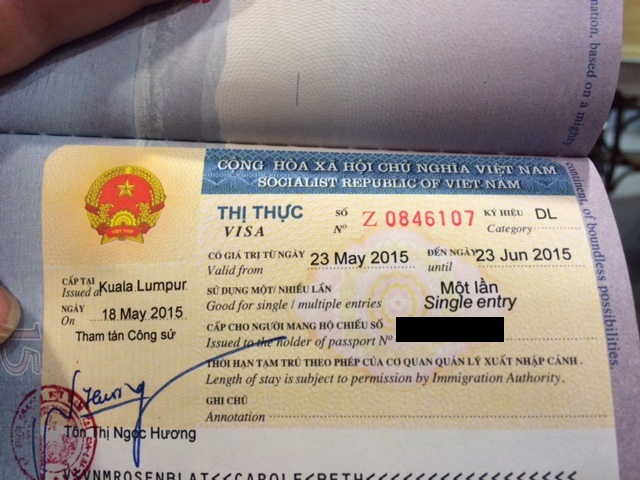 did was to work with my bank to get some money as, while I was in Malaysia with my debit card in hand, somebody in Indonesia had apparently made a copy of the card electronically and, faster than you can say, “What the F@*&?” took all of the money out of my account. I’ll tell you more on that later). Applying for a Vietnamese visa meant giving up my passport for a few days. This is the first time I’ve ever not been in possession of my passport while in a foreign country and it was, well, quite foreign to me. On Monday, I did the trek back to the embassy and proudly claimed my passport with my full-page Vietnamese visa. That done, I went to have a beer. As I was admiring my new passport bling, I noticed the effective date was May 23. That would be awesome if my airline ticket weren’t on May 22. Did I confuse my dates between completing the visa application and purchasing the plane ticket? Did the embassy simply choose to give me a visa effective on May 23? It doesn’t matter. It’s like the Serenity Prayer:

God Grant me the serenity to accept the visas I can’t change;

The sweet-talking I can do to change the plane tickets I can;

And the wisdom to never, ever ague with immigration officials.

I downed my beer and hightailed it back to my hotel where I got on the phone with Vietnam Airlines. Between the bank issue and the visa issue, I’ve used Skype often in the past two-weeks. (Did you know that you can dial toll-free numbers {800, 888, 866} through Skype for free? And you can dial regular international phone numbers really inexpensively.) My flight was due to arrive at 3:00pm on May 22. With the visa in effect for May 23 I thought about risking it and maybe they’d just make me wait in the airport for nine hours until the stroke of midnight (a modern-day Cinderella). But it was just as likely that the airline could turn me down and not let me on the flight. Or even that I could arrive in Vietnam and Vietnamese immigration could deport me at my own expense. So, on the phone with the representative for Vietnamese Airlines, I explained my situation and asked how much it would cost to change the ticket.

After a few minutes of checking, the man came back on the line and said, “That will cost $75.”

Understanding that I was getting off cheap, as there could have been a change fee larger than the cost of the $175 roundtrip ticket, it still was about $75 more than I wanted to spend.

“Oh, well, I guess I have to do it. I’m just a poor, travel writer who is paying for all of this by myself,” I told the man hoping he’d take pity. “Is there any way it could be less?” I asked.

“Hold on one more minute,” he said.

As this was, well, only $50 over my budget, I expressed my sincere gratitude and, while we were still on the phone, he E-mailed me my new ticket. Here’s the lesson that I already knew but am sharing with you; travel is hard. But it’s also fun, educational, inspiring, and oh so many other things. Running a marathon is hard, getting a PhD is hard; many worthwhile things are hard. It’s about the payoff.

So now I’ve arrived in Vietnam. Ho Chi Minh City to be exact. Formerly Saigon, the name was officially changed to Ho Chi Minh City in 1976. Still, the airport uses the code SGN and, District 1, the area in which I’m staying, is still labeled as Saigon. Many people use the name Saigon simply because it’s shorter. I’ll be calling it either Saigon or HCMC.

I breeze through immigration as every single counter is open. In all of my travels, I don’t think I’ve ever seen this. I step in a line at one of the many desks I can choose from and there are only four people in front of me. Crazy. After customs, I step up to one counter and buy a SIM card, and check out the price of a taxi at another counter. Everything is easy so far. I’ve been given a rate of 200,000 Dong (yup, that’s the name of their currency) which is equal to approximately $9.00. I decide to step outside to see what kind of rate they’re offering out there.

I walk up to the taxi stand, tell the dispatcher where I’m going and ask how much. She tells me “meter.” Great! I then ask approximately how much that will be. While she’s either figuring it out, or stalling for time, a taxi driver begins putting my bag into his car. I speak up and tell him to hold his horses as I want to understand about how much it will cost. Finally the dispatcher confers with the driver and says it will be about 200,000. Okay, so it’s about the same as inside.

I get into the taxi (up front, with the driver as is my norm) and try to ask questions but English is not very common here. The meter’s running and, as we exit the airport the driver turns to me and says, “Money.”

I point to the meter and say, “I’ll give you money at the end.”

He pretends not to understand, though I think he does. As we drive, I get my first look at the craziness that is Saigon traffic. It’s somewhat like India without the whole, constant horns and driving on the wrong side of the road thing. Still, I get to see a taxi lightly tap the foot of a motorbike rider. Everyone seems okay and they quickly move on.

After about twenty-five minutes of driving, the driver asks me to pull up the address in my phone again (I’ve saved a photo of my reservation on my iPhone which I, again, show him). It turns out, we passed the hotel long ago and he makes a U-turn and heads back. After a few minutes, I try telling the driver to turn off the meter as it’s already reading more than it should (132,000 when we initially turned around and 145,000 at this point). I point to the “stop” button on the meter and he indicates he doesn’t understand. I tell him I’ll pay no more than 200,000. He starts to throw a Vietnamese cab driver version of a hissy-fit. Eventually we arrive at the hotel. The meter reads 177,000. I hand the driver 200,000 and ask for change. Hissy-fit number-two.

“No way,” I say sternly. “I’m already giving you way too much. You got lost and now you’re charging me for that and you want more?!”.

I grab my bags and fight to cross the street as Mr. Crappy, Dishonest Taxi Driver has dropped me across the outrageously busy street. Welcome to Vietnam.

Hey, did you see? The next vote is up! Go see Roos or Hobbits and vote for the next Drop Me Anywhere destination!