I was a child of the 1970’s. During my young childhood, in Oak Park, Michigan, a suburb of Detroit, while race-riots were erupting around, and protests about a war far, far away were turning violent, my parents, and most of those of my friends, kept us protected from the harsh realities of the times. We rode our bikes, played Rain on the Roof (a ball game) and our biggest problem was that our older sister’s bedtime was later than ours. Today, I get to see what it was like for others, including children my age, in this land far away.

Tony, the former Vietnamese soldier and current pedicab driver drops me off at the War Remnants Museum. I pay the 15,000 Dong Fee (about US$0.69) and head inside. I enter the ground floor to a photo display which shows all of the countries which were against U.S. involvement. The display continues with photos of Vietnamese and U.S. government delegations meeting at various times throughout the 1960’s and 70’s. 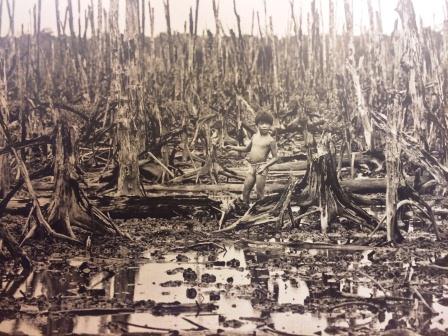 I continue on through the other three floors of the museum. Most of the museum is a captioned photo archive with various objects, or as the museum is called, “remnants,” scattered throughout. There’s a collection of photos showing the immediate, as well as long-term, generational effects of Agent Orange and other chemicals. (For those who aren’t clear on it, Agent Orange and other chemicals were used by the U.S. to destroy the jungles which gave cover to the enemy). There are still children born today with birth defects which are being blamed on the use of the chemicals some forty-years ago.

There are rooms containing displays of weapons, and stories of specific U.S. soldiers who committed

atrocities (such as My Lai), as well as a few of U.S. soldiers who did good things. There are, of course, displays about Vietnamese heroes and martyrs. There are propaganda posters such as the cartoon-one with the caption, “Posters appealed to the Vietnamese people to help American pilots” (oh, I highly doubt it). I understand that much of what I see here, as well as in other areas of Vietnam, is incredibly one-sided and filled with propaganda. Still, it’s important to understand what information people get in any country tends to be slanted, but also forms their views. There are bits, or, in some cases more than bits, of truth in it. 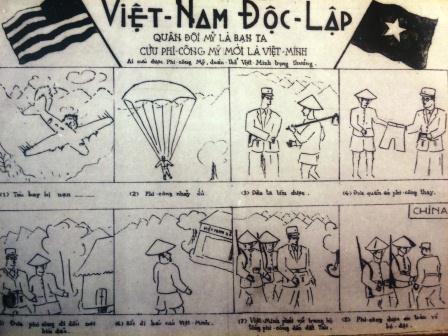 There’s also an incredibly touching display on international war photographers, many of whom lost their lives in this war. There’s respect given to them, whether they be Vietnamese, Japanese, French or American. After all, it was these photographers who shared the horrible tragedy that was happening.

As I walk through the museum, I find myself both saddened and outraged at the violence, waste and lies involved in the tragedy that was the Vietnam War or, as it’s called here, the Indochina War. I also find myself even more grateful to those American soldiers who were involved in this tragedy, as many simply found themselves in a no-win situation with no clear way out. As I view some displays, I have the urge to pound on the wall and scream at the horrible waste it all was.

I exit the museum into the courtyard where helicopters, airplanes and other larger military equipment belonging to both Vietnam and America are parked. While interesting for a woman, I’m sure this part is near nirvana for many gear-heads.

After approximately three-hours in the museum, I head back to my hotel. I’m physically and emotionally exhausted and decide to have a night in. After a little work, I run down the street to a bakery and grab some various bread-based items to hold me until breakfast the next morning.

In the morning I awake and head to the ninth-floor for breakfast. As was my experience yesterday, breakfast is uninspired (it’s really bad). I grab a sunny-side up egg whose sun has set a long ago, and scrape an unnaturally red colored sausage from the chafing dish which it has now fused with. I decide the whole apples and oranges sitting on the top are my best bet, but when I pick them up, they’re hollow. It’s bad when the plastic fruit is the most appetizing thing on the buffet. I ask for coffee as the coffee pot is empty. The attendant says he’ll take care of it and, twenty-minutes later, he’s brewed another four whole cups.

I head back to my room to pack as I’m moving to new hotel today. At about the same cost, it’s in an area with many more restaurants and cafes, and is just down the street from the market. It’s also a block away from the Paradise Boutique Hotel, which I’ll be moving into later in the week but can’t afford too many nights at.

I ask the hotel to call a taxi and, as I enter, I feel more prepared. I’ve Google-Mapped the directions and show the taxi driver. It turns out, he needs them as he hasn’t a clue where he’s going. We navigate the ten-minute ride together (taxi-rides here are a team effort if you don’t want to be cheated) and arrive at the address. Unfortunately, I’ve used the address on the receipt I was given yesterday when I found the hotel while walking and put down a deposit. The address on the receipt is for the other location of this hotel group. I hand the man the business card of the Paradise Hotel as I know my new hotel is just a block away. He drops me at the Paradise Hotel and I walk with my bags. I’m just happy that he didn’t ask me for more money than the meter read. This is my definition of success. 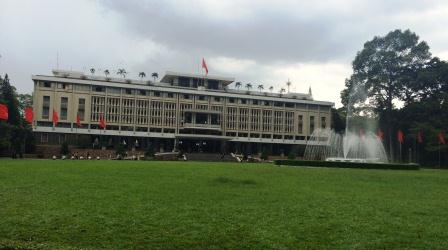 hallways look like an office building, but the meeting rooms are more ornately decorated with pretty (not beautiful, but pretty) chandeliers and nice artwork. There are conference and dining rooms for meeting dignitaries. One of these rooms, with a collection of important looking telephones, was used for a meeting between the Vietnamese president, his senior officers, and U.S. advisers on April 3, 1975 as they tried to find a solution for what was becoming clear, would be a loss to the North Vietnamese. There’s also a room where Henry Kissinger met with President Thiêu to persuade him to accept the terms of the Paris Peace Accord. 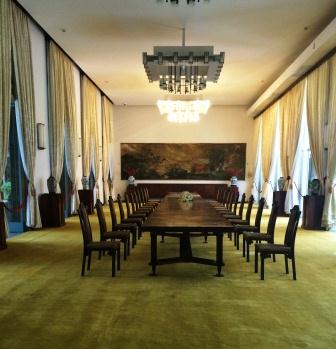 As I walk through, a thunderstorm has begun raging outside and it feels a bit like a movie, with the booming sounds providing a sense of foreboding for what was to come.

I continue on to see the former presidential office (not nearly as impressive as the Oval Office) and the living quarters which are comparable to my current $33 per night hotel room. I walk through the kitchen where signs brag about the “state-of-the-art” equipment which, I’d guess, wasn’t even state-of-the-art in the 1960’s.

I get a look at the bunker below the palace and walk through the presidential office, communications room, presidential sleeping quarters and other rooms. I agree with the comments I hear of how it must have been difficult running a war from down here as it’s dim, cramped and, with no air conditioning, sweltering.

As I’m walking out of the bunker, I hear some Americans speaking with their local guide while pointing to a map and indicating where they’ll visit in the next few days. I approach them to chat about their planned travels as I sense there’s more to the story. It turns out, their father, who is traveling with them but not in the palace today, is a Vietnam veteran and has experienced Post Traumatic Stress Disorder. They’ve come as a family to try to find him some peace. They’ll travel to the city where he fought, in hopes of him “coming to terms with it.” Yes, the war changed both Vietnam as well as America. I wish them peace of their future travels and head back to my hotel.

Tomorrow, a night at the market.

*Note – as per reader requests, I’m attempting to include many photos in these posts. While I love the power of words, I also understand the curiosity of Vietnam and will do my best to describe the place in both words and photos.

Have you voted our next locations? Well do it again. This is an interactive project so please do your part by voting. VOTE HERE