Following a couple of days of experiencing the history of Vietnam and Saigon, It’s time for a night out exploring the local color. In many cities I’ve been to, this means the marketplace. And with my new hotel just a couple of blocks away, I’m like the first little piggy.

Before heading out, I pop online to one of the many hotel and air booking sites I belong to and change my upcoming reservation for the Paradise hotel. I actually cancel my confirmed reservation as I’m still within the no penalty period. I want to move it up one night and, as often happens when you book last minute, the price has gone down. I’ll now pay more than $10 less for the night. I also book two more nights in my current hotel at $5 less per night than they’ve quoted me in person. 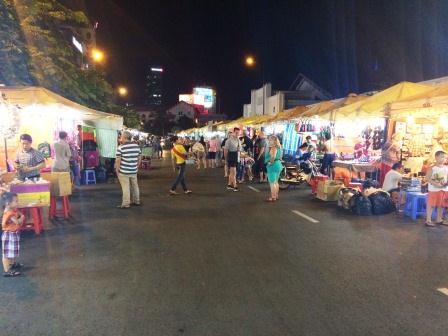 I’m now famished and I hear the Ben Thanh Market is not only bustling with vendors selling, well, everything, but there’s also some food to be had. I walk two blocks, passing the market’s fresh-flower vendors, and find myself in an open-air street which, in other places, would be a pedestrian street. Here, not even the sidewalks are strictly for pedestrians. While Saigon doesn’t have nearly as many honking horns as India, it’s by no means quiet. And rules of the road? Pfshht. We don’t need no stinking rules. Yes, they generally drive on the right side of the road. . . unless they’re driving on the left. . . or maybe the sidewalk. They drive fast and the number of motorbikes far outweighs the number of cars. As far as “right-of-way” goes, there’s no such thing. Cars just sort of weave past each other when they meet at an intersection. As for pedestrians, I’ve accepted the fact that there’s a high probability that I will die while walking in Saigon. When you cross the street you must look in all directions; not just once, but continuously. I’ve developed a strategy of walking next to a local whenever possible while crossing the street. They seem to sort of know what they’re doing and, if they’re on the side of oncoming traffic, at least they’ll be hit first.

I find an open-air restaurant with, what seems like a nice local menu (with a few of the unusual items, for this American, typically found on a menu). I take a seat next to a man who, like me, chooses to sit in the front row to watch the scene in front as people pass by, His name is Kristof and he’s a German working in Singapore. As he heads up the Asia division of his company, he travels around Asia quite often. I ask him for a meal recommendation and he points to a fish on the menu saying it’s his regular dish. Still, he adds the disclaimer, “If you don’t like it, I don’t take responsibility.” Well, okay then.

We sit and chat while we wait a half-hour for the beers we’ve ordered (we stop the waiters and waitresses multiple times, kindly reminding them of our order). Eventually the beers arrive, along with the standard glass of ice. Kristof has no use for the ice as, being German, he’s used to room-temperature beer.

Kristof’s appetizer of extremely large prawns arrives and the waitress takes her scissors to it, cutting of the shells, legs and tails before using her scissors to cut it into bite-sized pieces, after which Kristof kindly offers me a taste. Before accepting, I ask him what the gooey liquid is which is oozing out of a few pieces. He responds that it could be poisonous so it’s best not to ask and simply avoid it. Hmmm, is this the way Germans joke around?

Finally, our fish arrive. We grab our chopsticks and dig in. My chopstick skills seem to have improved or, perhaps, fish is just easier than slippery noodles. We have a long chat over a few beers and a really tasty dinner. Kristof loves Asia, yet understands the difficulty with trust I’ve had. I explain that India, being my first stop in Asia (I’d been to many places in Turkey quite often and visited Kuwait once but those aren’t typical Asian cities) had tainted it. He agrees and tells me he’s sorry that I’d started in India. (Don’t worry; I blamed you, my Virtual Travel Buddies). After an hour-or-two, we say our goodnights and I head back to my hotel.

I awake in the morning and head down to breakfast. As is the norm here, it’s included in the room price. I walk into the lobby where it’s supposed to be served and look at my watch. It’s 9:00am and I’ve been told it ends at 9:30. I ask where breakfast is and I’m told I have to go over to another hotel. Really? I just wanted to stop down for a quick bite before heading out for the day. Clearly not thrilled, I ask where to go. The bellman/doorman/guy-who-stares-at-his-smart-phone-all-day stands up and walks me outside. He gets on his motorbike indicating that I should sit on the back.

“How will I get back afterwards?” I ask.

“Then why are we taking the bike?”

I finish breakfast and the bellman from the breakfast hotel begins walking me down the street. We run into my other guy on his motorbike who brings me back the rest of the way. I grab my bag and head out to explore the market in the daytime. 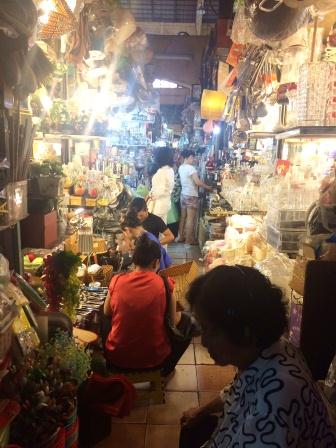 I’ve visited markets in many countries; Mexico, Turkey, Hungary, England and more. They’re all mostly the same, yet very different. While not any larger than most of the others, this place crams in a lot more vendors. There are countless ones selling shoes, gold cat statues, T-shirts, coffee, dried and fresh fruits, luggage, and a variety of unidentifiable food items. The food items come in vats which you can purchase for a set amount of Dong per 100 grams. I couldn’t, for the life of me, identify many of the things in these vats, but I’m sure one of the flies dipping their toes in could. There are also food-counters serving various local dishes. I’m not really squeamish when it comes to trying new things but, given other options, I’ll often take them. Knowing that there’s much food outside the marketplace, I choose to look elsewhere. 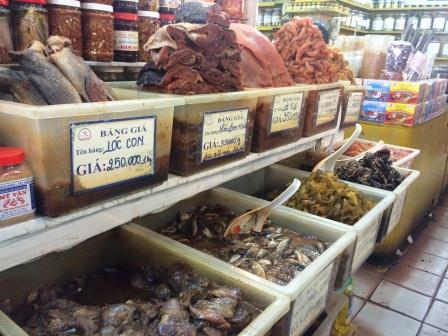 I walk down to the Saigon River in hopes that there might be some food there, but find none. (I’d heard a rumor of some cafes there but, apparently, it was just a rumor). I allow myself to, once again, be talked into a pedicab ride. The guy says there’s a place just up the street and, as it’s about 100 degrees Fahrenheit with 100% humidity (and I forgot my sunscreen today), I arrange a price of 50,000 Dong. (At first, he refuses to tell me a price saying, “Don’t worry,” but I refuse to get in until a price is agreed on.) We pass the Tourism Board building where he points and says, “Oh, the place used to be here but moved down there.” Before I know it, we’re turning away from the waterfront which, if you remember, was the whole point of this sweaty walk, and heading up a side-street. I tell him I’d wanted to eat by the river and he tells me, “This place good and cheap.”

I step out while expressing my disappointment. This seems to be the way Saigon goes; everyone decides what you want, even if you choose otherwise. And these taxi and pedicab drivers? I’m ready to leave Saigon and I’ll attribute much of that feeling to them. I want to go places but, if they’re not within walking distance, I consider whether it’s worth the hassle of taking a taxi. I have taken a bus and actually had a good experience. It was clean, they didn’t try to cheat me, and the man told me where to get off. And the woman behind me was jolly and continuously smiled at me and laughed.

I choose not to eat at this restaurant as nothing is looking very appetizing and, though I see Fried Goat’s Penis on the menu, I decide to save that for another day.

Tomorrow, I cruise the Mekong Delta. While I’m cruising down the Delta, how about you click here and vote for our next location? What? You’ve already done it? Do it again!

Welcome Home Vietnam is Like a Box of Chocolates