I’m up early this morning as I’ve got a few big days planned. I’ve booked a one-night, two-day tour of the Mekong Delta. For just over $50 this includes two days on a boat, the round-trip bus transfer, a night in a hotel, one lunch and one breakfast. I’ve packed an overnight bag and head down to walk across to the Paradise Boutique Hotel whom I’ve reserved the tour through and will also return to stay one night.

I’ve not planned on any breakfast at my hotel as I don’t have time to get on the back of a motorbike like I did yesterday (see Crazy Traffic and Crazy Food), so I hope to grab a coffee and a muffin at Paradise. When I come downstairs, I’m careful not to awaken the bellman sitting by the front door, using the glass as a pillow while he sleeps. I notice that breakfast is all laid out in my hotel, but have no time to eat it. I just can’t seem to get the rhythm of Saigon.

I drag my bag across the street and check it with the bellman. I’m only slightly nervous as I’ve left almost everything I own, including my computer, in my big bag. I’ve stuffed everything else into the new North Face day-backpack (“Is real! I promise you,” she said as she was selling to me, though we both knew otherwise) which, it turns out, is much smaller than the nothing-fancy, thirteen year-old backpack I’ve been using. This new one cost me US$15 and I’ll probably end up giving it to someone in Vietnam.

While I’m waiting at the counter for my coffee and fruit plate packed to go (there doesn’t seem to be much take-away food here), Jolly, the lady who’s been assisting me with my plans approaches. She informs me that she had some trouble getting hold of the agent they use to book train tickets and, by the time she could, the train was sold out. This is more than I can handle before my coffee, as I was assured it would be no problem. This seems to be the way here; they want to make you happy so they tell you things won’t be a problem, until they are. To quote Forrest Gump, “Vietnam is like a box of chocolates. You never know what you’re gonna get.” (What? He didn’t say that?)

As I’ll be on the Delta, I’m not sure what my WiFi access will be and, I really have no desire to sit on my iPad or phone trying to make arrangements. I write a note listing the different options in the order of my preference as, I know that if we try to go back-and-forth via E-mail, I’ll end up with nothing. I’ve already been asked if I’ll pay more for the ticket, if needed, through a different agent, and have said no as I could have gotten the flight for the same amount.

I board the bus and join the others already waiting. We stop by a couple of other hotels to collect more people before finally continuing on our way.

Our guide introduces himself as Rio. Most Vietnamese people I’ve met use a western name (western in relation to the whole world, not as in “Hop-along” or “Duke”). While, at first, I believe Rio is a young man, I later reevaluate this as I notice what might be breasts peaking out from under the T-shirt. Regardless, I’ll refer to Rio with the pronoun “he”until I receive confirmation otherwise. Rio tells us much of the plan for the day; we’ll start with an approximately two hour- drive with a quick bathroom stop before boarding our boat on the river.

Two hours of mostly freeway driving later (it feels good to get outside of the very crowded Saigon), we arrive at our boat and fifteen of us step on board. Our group consists of two Dutch, one Chinese, six Vietnamese, one Spaniard, one Austrian, two French people, and two Americans (myself included). The boat is similar to many of the other boats we see, both parked and carrying passengers, with wooden folding chairs set up on the flat deck of a basic wooden, gas-powered longboat, two to a row with an aisle in between. We grab our seats and are off. 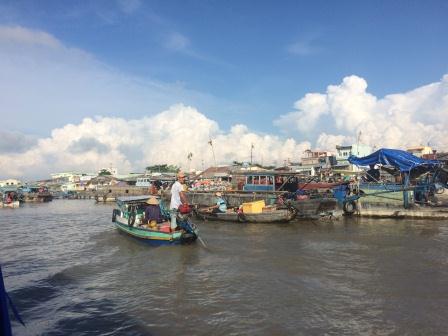 The Mekong River is approximately 4500 kilometers long and travels through six countries – China, Myanmar, Lao, Thailand, Cambodia, and Vietnam – and serves as a major trade route between all of the countries. The Mekong Delta consists of the river, as well as the many tributaries surrounding it. Our first site is the floating market. A major attraction here on the Delta, the market opens very early each morning (about 4:30am, way before my coffee) and lasts until around 9:30am. Unfortunately, it being just after 11:00am, there are only a couple of boats at the marketplace selling potatoes. 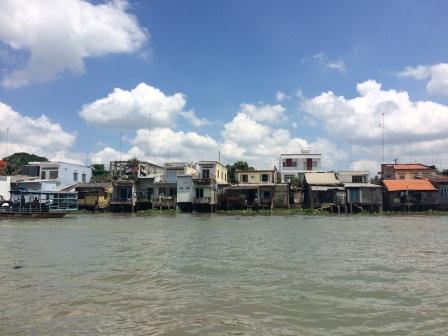 We move on down the waterway seeing stilt houses which, as rainy season is just beginning, will stand above the water as the level rises. After a while, we step off our boat into a combination demonstration building and gift shop. We move from one area to another, watching demonstrations on how they make coconut candies, as well as rice wine, rice paper, and puffed rice (they use sand from the river bottom heated in a pan and then throw rice in, which quickly explodes). This area, once again, reminds me of Forrest Gump – “There’s shrimp gumbo, shrimp creole, boiled shrimp, barbecued shrimp” – well, you get the idea. Just insert rice wherever you’d hear shrimp and you have the Mekong Delta.

After taste testing all of the samples created from the demos, we board our boat and head over to another area of the Delta where we step out of our “big” boat and onto tiny longboats. Each boat holds four people plus the driver and, as we board, we’re told to always stand in the middle so as not to tip the very unstable boat over. (Did I mention there are alligators in these waters? No? There are.) We’re given traditional straw hats for the ride and soon enter the beautiful, green mangroves. Like something out of a movie, it feels surreal. Its beauty is undeniable and yet, I also think of all of those photos I’ve seen of American soldiers wading through the waters in Vietnam’s jungles while holding their guns over their heads so as not to get them wet. 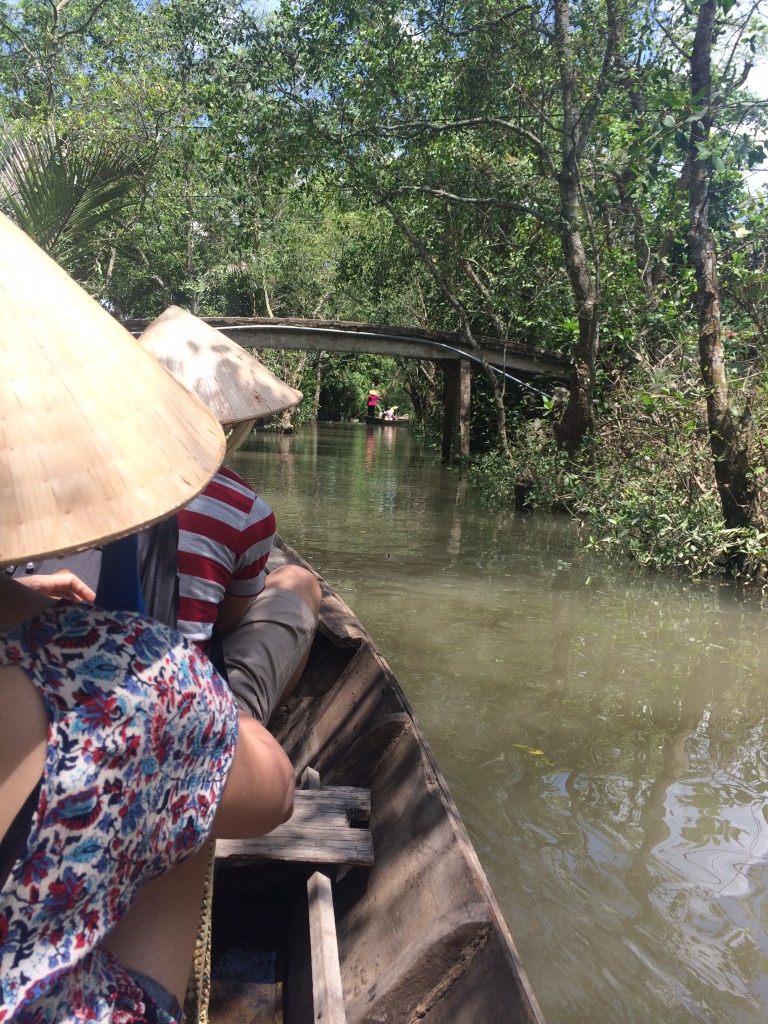 We soon arrive at a small restaurant where we’re served fruit, and have a chance to hear some singers perform, what seems like, a short show involving some family situation. As it’s performed in Vietnamese, it’s tough to tell. It looks like some version of a live, Vietnamese, musical soap-opera.

We finish our fruit, climb back into our big boat, and head over to a nice lunch of rice and some sort of meat (pretty sure it isn’t dog). While there, I enjoy a nice conversation with Sylvia and Weida, who give me some tips on some Vietnamese cities they’ve visited and I might want to consider. They also warn me not to stay too long in Hanoi as, apparently, it’s even more crowded and busy than Saigon, with the same cheating taxi drivers. Great tips from some fellow travelers which I’ll be sure to use.

After hanging out on the banks of the Mekong Delta for a bit, we go for a long boat-ride and, about forty five-minutes later, we step off onto the street where our bus meets up. Rio lets us know that we might want to use the restroom across the street as we now have a three-hour bus-ride back. Um, what?

Everyone looks at me as if I haven’t a clue. Rio then explains that everyone else is taking the one-day trip. Ah, it’s starting to become clear. I’ve reserved the one-night, two-day tour. I wasn’t aware that nobody else was until this moment, and nobody else was aware that I was taking the two-day trip. I’m a bit disappointed as, well, traveling alone, especially in a country where you don’t speak the language, can be a bit isolating. It’s nice to have some good conversation, as well as see the same people two days in a row.

Rio introduces me to Sam who, along with a driver, takes me to Cân Tho, a city about an hour away which sits on the banks of the Mekong Delta. He explains that I’ll meet a new guide and, perhaps, another group for tomorrow’s trip which will begin with a visit to the Floating Market (I knew I took the two-day tour for a reason). I bid a quick farewell to the others on my tour, climb into the van and head off to Cân Tho.

Tomorrow – A night in Cân Tho and a morning at the Floating Market.