Friendly Vietnam and the Floating Market

After finishing today’s tour of the Me Kong Delta, I check into the Hau Giang 2 Hotel, in Cân Tho, and head up to my room. I’ve been told by Sam, the guide who took me ton my hotel, to meet in the lobby at 7:30am tomorrow for the tour. When I enter my room I’m pleasantly surprised as Jolly, at the Paradise Hotel has told me that the hotels along the Me Kong Delta can be pretty bad, which is why, she says, I should only do a one-night tour. This room is one of the best I’ve been in. It’s clean, the air-conditioning and WiFi work well, the shower is good, and there’s even a few English language TV channels. Perhaps, as the Paradise Hotel is slightly above my regular budget, her regular guests are less appreciative of this fine hotel. Or maybe she was just trying to keep my expectations low.

I cool-off in my room for an hour, but choose not to wash the slime of the combined sweat and sunscreen off yet as there’s a good chance I’ll be more sweaty when I return. Besides, who am I trying to impress?

I walk down the street to the market. Yup, every place worth visiting has one. The one here is much different than in Saigon as it’s quiet and they’re not nearly as pushy. They have some nice clothes, (even if I needed some and could fit them in my luggage, I’m much too slimy to deal with clothes), some more fake bags (did I mention that when I arrived at the hotel I noticed that my brand new “North Face” backpack which I purchased less than 24 hours-ago has already torn? Who knew North Face made disposable bags?), some figurines, and toiletries. My big purchase at the market? A toothbrush and toothpaste, as I seem to have forgotten to pack it up from the last hotel. 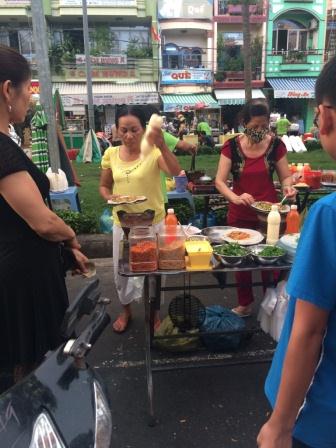 I continue out of the market to walk around the city. The streets are like a fair, with carts lit-up selling goods (I watch a woman superglue rhinestones onto a “genuine” Louis Vuitton watch) and a variety of local street food. There’s shrimp, drinks, various fried-ball-things, and a plethora of stuff which I have no clue as to the origin. I purchase some fresh cane sugar juice and some sort of fried potatoes. As I walk through the lit up streets, I appreciate the energy of this place. While Saigon has a lot of energy, it’s untamed and feels noisy and chaotic. People stare at me as I seem to be the only Westerner around. They’re very friendly and everyone wants to say hello and practice their English. This is the Vietnam I’d been told about. Where the people are friendly with, seemingly, no ulterior motive.

As I pass a row of cafes (not the Parisian kind, but the kind with plastic tables with plastic chairs set outside a small, covered storefront restaurant), a man comes rushing towards me with menu in hand. I take a look and decide it’s time for a well-deserved drink. I sit down and order a Saigon Special; Saigon is a local beer and “special” means more alcohol (yes, please). The place is called a sports bar, and having one television which shows soccer makes it so.

Sitting on the corner at this cafe and watching the world go by is just what I’ve needed after the chaos which is Saigon. I see no reason to get up and move so I order some chicken fried rice, another Saigon Special, and settle in for dinner. The young man seated next to me strikes up a conversation asking where I’m from. This leads to a much longer discussion about school – he’s an accounting student – and family – he’s an only child, which is unusual here, and I get the feeling this weighs heavily on him. His name is Kenny (again, it’s a more complicated name which he has chosen to Westernize to make it easier for, well, Westerners) and, by the time I leave, he’s given me his E-mail address and phone number (I can still charm the young ones). 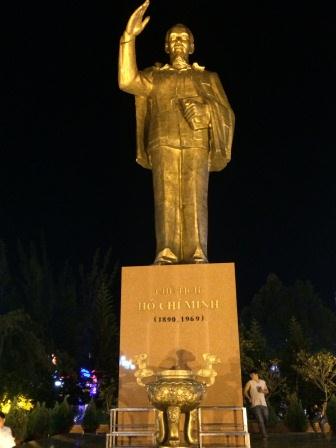 I take a walk around this town which, it turns out, comes alive at night. Well-planned, lighted decorations line the streets (not like the haphazard, neon ones which blink throughout many cities) and the large park along the Me Kong River is bustling with families enjoying a summer night, children playing, teenage girls gossiping and lovers conversing while sitting on benches. It’s a lovely seen watched over by a large statue of Ho Chi Minh.

The people are incredibly friendly, and both adults and children approach me as if I were a movie star. The kids are in awe of this woman who looks different than those they’ve seen before and many of them, as well as the adults, want to practice their English. It’s a very special night which I’ll hold a fond memory of. 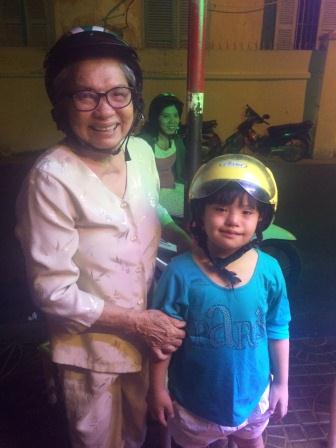 The next morning, I head to an early breakfast and arrive in the lobby to depart at 7:00am (when I returned last night I was told that the departure time had been moved forward to 7:00). Sam, who dropped me at the hotel yesterday leads me outside to a man on a motorbike. I climb on the back and we’re off to the dock. When we arrive, a lady standing at the boats smiles, while telling me off.

She helps me board the boat (I’m a little afraid she’ll push me in) and, in front of me, I see a boatload of Vietnamese people, all wearing lifejackets. (Apparently, as they were laid out on each seat, people felt they should put them on. They’re slowly removed throughout the day.) We leave the dock and head off to explore the Floating Market.

On the way I meet Kevin and his parents. They’re from Saigon, but he attended school, and now works as a cook in Australia and thus, speaks fairly good English, His parents, Thuin and Huong are both math teachers and speak no English. Kevin does a great job translating and his dad makes some suggestions on where I should travel in Vietnam. They’re a lovely family and I sure do appreciate talking with locals. 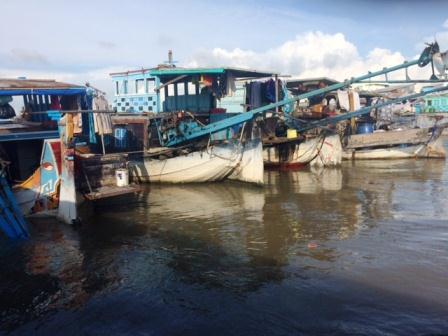 The Floating Market is something to be seen. It’s the lifeblood of the Me Kong Delta and where

everything the farmers grow is brought to market to be sold, either by a go-between

businessman, or by the farmer himself. Each boat has a pole on the front and, hanging from that pole, is sample of what the boat has to sell. There are no Louis Vuitton watches or North Face back packs here, only ready-to-eat, or take-home-and-cook food items. When someone on our boat expresses possible interest or the driver slows, a small boat will pull alongside and, using a rope and metal hook, attach their boat to ours to do business. I buy a coconut, less for the refreshing water inside and more for the thrill of purchasing something at the famous Me Kong Floating Market. 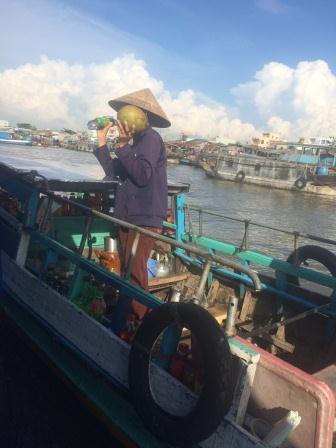 We continue in our boat to a stop where we’re shown how rice noodles are made (as I made the point yesterday in Vietnam is Like a Box of Chocolates, rice is the main crop here in the Delta). These people work incredibly hard under very tough conditions – if the heat in the Delta weren’t enough, they’re standing in front of these fires all day long – for very little money. Many of the rice noodle producers on the Delta are family operations. Before we leave I stop to use the restroom. I’ve been living in a constant state of near dehydration in order to avoid public toilets as much as possible due to, well, the cleanliness factor. As is often the case, this restroom has Asian style toilets or, as they’re affectionately referred to by we Westerners, “Squatty Potties.” They can be more convenient than hovering over a seat which you wouldn’t get your bum near with a twelve foot-poll. I’m not bothered by the lack of toilet paper as I reach into by bag to grab the roll of which I stole from a restroom yesterday. Unfortunately the roll is nowhere to be found. How does one lose their stolen roll of toilet paper? Apparently that’s karma literally biting me in the ass.

Following the rice noodle stop we head over to a restaurant area where we’re served fruit. This is meant to be a stop where you can rent bicycles or take a horse cart ride but, just prior to our arrival, a thunderstorm has hit and the jungle rain is falling hard. It becomes a time to enjoy a nice conversation with some English folks on another Me Kong Delta trip.

After an hour, we head out for a long boat ride in our long-boat. It’s 11:20am and we’ve arrived back in Cân Tho. I’m instructed to be in the hotel lobby at 2:00 for my one hour-transfer to where I left my group yesterday. From there, I’ll join another group for the three hour-transfer back to Saigon. A long time on the bus. I say goodbye to Kevin and his parents and head off down the street to find a place to eat and a decent lunch.

On the bus ride back, the guide explains a survey he’s handing out to get feedback on how we enjoyed the tour. He hands a form to the Australian guy next to me and stands watching over him as he completes the form. Nobody else is given a form and, when the form is complete, the guide takes the form back, tells the whole bus, “Thank you very much,” and sits down. Nobody else receives the form.

Tomorrow – I board the overnight train to Da Nang.

Have you voted? There’s only two-weeks left to vote on where we travel to next. Click here!

Vietnam is Like a Box of Chocolates Goodnight Saigon