Today’s the day I leave Saigon. I’d like to say this makes me sad but, it’s time. Saigon is a city of ten million and, with that many people, it’s not as if I’ll be missed. While it might be right for some, the traffic, the noise, the amount of very persistent people trying to sell me things, well, it’s too much for me. I’ve been in Vietnam for a week and I’m happy to move on.

Tonight I’m taking the 7:30 train to Da Nang. It cost me about $50 and while, for the same price, I could have taken a flight, I thought this would be a nice way to see the countryside. I’ve heard the trains, though not quite up to European standards, aren’t bad so I’ve booked a four bed berth and have my fingers crossed. In the meantime, I have one more day in Saigon, which I’ve decided to use by relaxing as much as possible and hiding from the craziness of the city.

For the first time in a while, I wake and simply lie in bed. In the room, there’s a kettle and some instant pre-sweetened, pre-creamed coffee (oh Vietnam, you do like your drinks sweet). I lie in bed enjoying my sugary beverage while debating whether to try to make it to the included breakfast which ends at 9:30. Instead, I decide a second cup of this yummy coffee (it’s started to grow on me) will suffice as a substitute. The hotel has given me a 1:00 check-out time and I intend to use every minute. I lounge around writing, talking to my family via Skype and watching the Dog Whisperer train some very unruly characters.

At some point, it’s time to pack up and check out. I decide to avoid the craziness of Saigon for as long as possible and head upstairs to the hotel restaurant where I’m the only person to have lunch. Next, I take the elevator to the first floor and enter the spa. When I checked in, the hotel provided a coupon for a complimentary Jacuzzi, sauna and steam-room. Sometimes it’s good to stay in a nicer hotel with such facilities as it’s a great place to waste some time before a late train or flight.

All spa facilities, including the locker-room, are coed and, and as there’s currently a man inside changing, I’m asked to wait outside. After a few minutes, I’m shown to a small area with the three facilities I’ll use, as well as a tiny locker room, and a smaller locker/changing room. I’m provided with a locker and am offered some white, cotton shorts which tie at the waste as a form of bathing suit rental. Um, nice, but I think I’ll wear my own.

I spend the next hour sweating it out in the various heated rooms and pools (strange, as I’ve already had enough of the heat and humidity of Saigon). I eventually drag myself out of my protected, quiet bliss and head out to the French bakery to pick up some snacks for the train. After two drinks at the hotel’s happy hour – getting just drunk enough for an overnight train ride, but not so drunk that I can’t navigate the train station – I grab my bags, ask the hotel to get me a taxi (the most reliable way not to get cheated) and head off to the train station. I’ve asked the hotel what the price should be as another defense at not getting cheated.

Fifteen minutes-later, I arrive at the train station. Ticket in hand, I walk around looking only slightly confused. I’ve checked out the meaning of everything on a ticket ahead of time on the website The Man In Seat 61, so I have some clue as to what’s written on my ticket, but still have little idea how Vietnamese train stations or trains work. There’s a lady walking into the train station next to me and I notice her backpack isn’t completely closed. I stop her to let her know, as a train station is a terrible place for this to happen and, while I’m at it, I ask if she speaks English. She does! And she’d be happy to help me. She’s on the same train as myself, getting off at a different stop.

She leads me to the correct train and, as we enter, my first impression is, this might be scary, followed by it’s actually a bit similar to the formerly Eastern European train I once took from Berlin to Krakow. With the help of the lady, I locate my cabin and, as I suspected, I’m on the top bunk. I’m a bit disappointed as I took the train in order to see the countryside and there’s little view from the top bunk.

As I’m getting settled, I notice the cutest little boy in the cabin next door. The great thing with kids is, it doesn’t usually matter if you speak the same language or not, if you smile and get down to their level, eventually you can win them over. He and I spend some time playing peek-a-boo with the sheets before a father and his nine year-old son join me in my cabin. The boy’s name is Anh and he’s just completed his school exams in Saigon and is headed back home for vacation.

He learns English in school, which he loves, and he tells me it’s his favorite subject. We spend the next hour trying to converse, and, as we’re at the still at the train station, there’s free WiFi, so we take advantage of Google Translate. He thinks this app. is ever so cool and therefore, by association, I’m cool.

His father has indicated that, though they’re reserved in the bottom bunks, I can have one and Anh will go on the top. I’m thrilled as this means no climbing in and out during the night and I’ll be able to see the scenery in the morning. I begin to get settled, but my excitement is short-lived as a lady boards at the next stop, walks into the cabin, looks at it and flags down the conductor to tell me to get out of her bed. Apparently, something with Ahn’s father was lost in translation. Oh, and the lady is now not happy with me at all. When I move my newly stolen roll of toilet paper up to my bunk (thanks for the T.P. Paradise Boutique Hotel) she balks and appears upset that I’ve taken the toilet paper with me. Hey lady, steal your own roll, I think.

Anh and I are chatting across our top bunks when the vendor comes around selling snacks, Anh’s dad buys him a plastic cup filled with popcorn. This looks tasty and I request one also. Over my objections, Anh’s dad buys me a cup of popcorn. Like many other food and beverage in Vietnam, the popcorn is sweet. Anh and I sit and chat in broken English while eating our popcorn and I impress him with my tossing and catching of popcorn in my mouth-skills.

By 9:00pm everyone has settled in and lights are going out. The sun rises and sets early here and people seem to do the same. I use the bathroom and it’s a cruel reminder that I am in Asia. While the toilet is an actual seat, and not a squatty potty, it’s a seat where you don’t want to get your bum anywhere near. I grab onto the vertical rail in front of me and hang on for dear life as I hover over the seat. Surprisingly, there’s toilet paper.

I head back to my bunk do some writing, pop an Ambien, read a bit until it takes effect, and go to sleep early. I wake up to the sounds of people talking loudly and even louder Vietnamese music. There’s no sense of disturbing anyone here. In Vietnam, if I’m up, you’re up. Oh, it’s 5:00am. If you’re going to wake me at 5:00am, you’d better have coffee in your hand.

I’ve slept with earplugs and eyeshades, but this is no match for the volume of the noise around me and I finally give in, head off to the even dirtier bathroom to brush my teeth, being careful not to allow my hands, toothbrush, or toothpaste to touch anything. Climbing back into my bunk, I dive into one of the pastries I bought yesterday, offering another to my bunkmates.

Eventually the coffee cart comes around offering iced coffee with about a cup-and-a-half of sugar and some sweetened condensed milk. I buy myself, Anh and his dad a cup (the lady lying on the lower bunk refuses) and I ask if I might move down to watch the scenery as everyone is sitting up anyway.

I sit on the lower bunk and write bit while watching the scenery go by. As a friend of mine recently described my hat as Hunter Thompson-esque, I dedicate this moment to him. 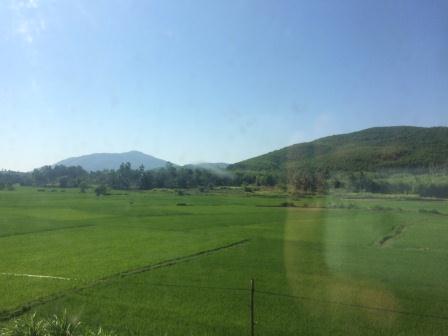 Have you voted? Please stop by and do it again. Tell me where to go. (You know you want to.) VOTE HERE!