I’m up early the next morning as I have an 8:00 meeting with Viet, the Founder and Director of Volunteer Vietnam. When you decided to drop me here, I typed the search terms volunteer Vietnam in Facebook and found just a couple of organizations; he was the first to answer. (The other was an environmental one who just answered yesterday and wants me to complete their application, submit my CV and, I’ll hear back from them in about a week to let me know if they can make a preliminary offer; a little too much preparation for my travel style.)
This morning, Tony, the Manager of the hotel that attempted to kick me to the street, drives me to the volunteer center on the back of his motorbike, in a concession for the bad experience of feeling quite unwelcome. It’s a day of seeing the harsh reality for the homeless, physically disabled and mentally ill in Vietnam. You’ll be able to read more about it, and the great work Tony and his team are doing, in a future article on www.Rebel-With-A-Cause.org.
The following day is another early one. I’ve booked a trip to Ba Na Hills. A little reminder of why I’m in Vietnam – because you voted that I come ride the cable car at Ba Na Hills, so here I am. And today’s the day!
The Golden Summer Hotel sells a tour to Ba Na Hills, an amusement park on top of a mountain with a couple of resort-like hotels (above my budget and they weren’t offering to help me out with that at all) a fake winery, a wax museum, a pagoda, a Buddha statue and, oh yes, the cable car with four Guinness world records – the longest single-wire cable car system, the highest difference between the departure and arrival terminals, the longest non-stop cable, and the heaviest cable roll.. The tour includes round-trip transportation, admission for the cable car (which also includes the amusement park), buffet lunch and an English-speaking guide. I’d debated whether to take the tour or go on my own in a taxi but, as the cable car admission is 550,000, and a round-trip taxi would be 400,000-500,000, I decided to take the tour, as it came with a guide so I might learn more and it would be organized for me.
Instructions said the bus would pick me up between 7:30-8:00am in the hotel lobby. While waiting, I meet a family who will also be taking the tour. The man speaks some English and we pass the time chatting until, at 8:15am, the buses arrives. As we leave, the lady seeing us off at the hotel shouts, “Have fun! Now you can talk to each other,” after which, we’re promptly put on separate buses, against my protests.

I climb aboard the 25 passenger bus which, not including the guide and driver, is filled with 31 people. Kids are thrown on laps, boxes and wherever else one can fit a kid in a moving vehicle. We depart the hotel and the guide begins speaking. She speaks for the entire forty five-minute drive to Ba Na. Every word is in Vietnamese. She seems very funny as everyone laughs pretty regularly. I ask if she speaks English and could translate what she was saying as I was told (both in writing and verbally) that the tour was in English. She responds by saying, “Later.”
At one point, as we approach a bridge, I ask what she’s telling everyone.
“Bridge.” she responds.
So glad I got a guide.
I ask what company she works for and am told, “I don’t know.”
“You don’t know who you work for?”
“No.”
“Who pays you?” I ask.
“I don’t know.” I later see the name of the company on her flag and you should avoid booking a tour with Conn eu Hong travel (Conn – love the irony)
After thirty minutes of this, I get on my phone, call the hotel and ask to speak with Tony. When he answers, I tell him of my disappointment and that I want my money back. The line goes dead. I call back several times and the phone rings a few times before the line goes dead. When we arrive, the guide gives some instructions in Vietnamese; I’ve no idea what’s going on. I asked the guide if I can use her phone to call the hotel as my phone doesn’t seem to be getting through (take from this what you will). When I speak with Tony, I’m told, “Backpackers don’t go to Ba Na so tours aren’t in English.”
“Then why do you have it listed on the paper and why did you say it was? I would have just taken a taxi and it would have been much more comfortable than an overcrowded bus.”
“You can come back and I will refund your money and you can take a taxi there.”
I explain that we’ve now arrived and they can give me my cable car ticket and just pay for my return taxi. The guide speaks with him on the phone and I’m handed my ticket along with everyone else. I have no idea what’s going on as I follow the group to the cable car. While heading there, a lovely thirteen year-old girl in our group named Yen approaches and says, “Come, you stay with us.” She’s traveling with her mother, Son, and sisters Hang and Ngan, who are thirty-seven and twenty-one. Yen and her family adopt me and things get better.
We’re herded through turn-styles and various lines, all the time being pushed and elbowed as this is simply the Vietnamese way. We board the cable car and begin the twenty-minute journey to the top. We sail over the jungle and a waterfall while looking out over Da Nang. It’s beautiful however, not spectacular. 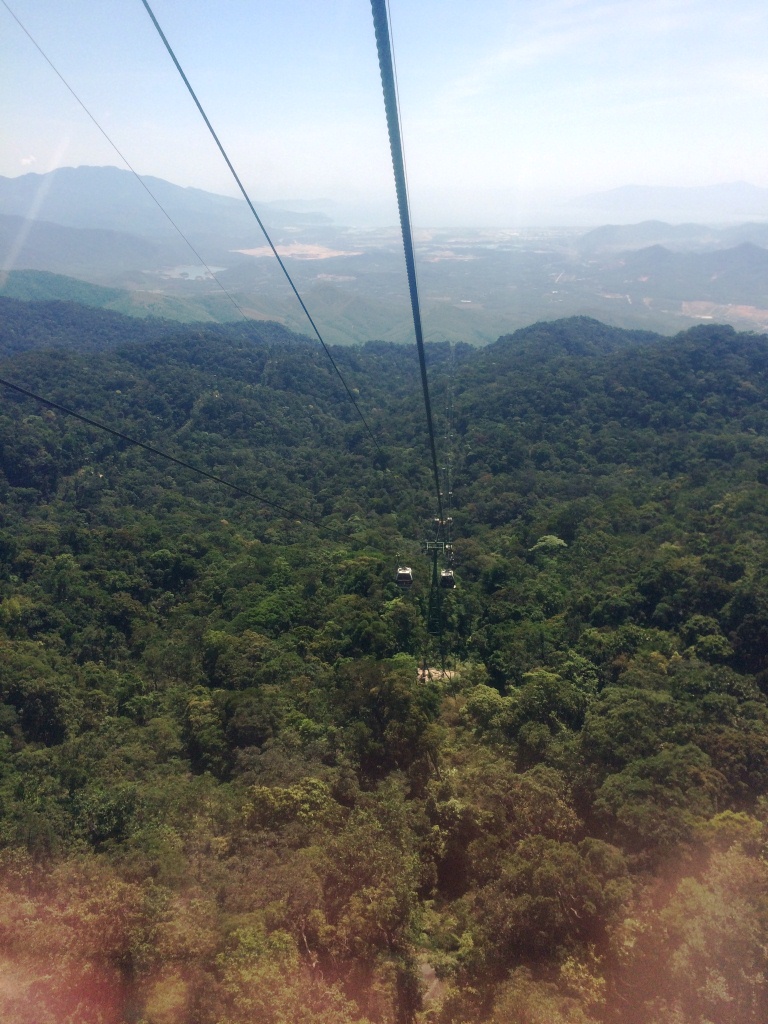 When we reach the top, the guide leads us towards a map and begins talking for ten minutes. I understand not a word and, after a few minutes, a Ba Na Hills employee takes me aside to a map that’s in Vietnamese and English and explains how things work. I thank her for taking the time to help me and walk back to Yen and her family. When people begin handing money to the guide, I ask Yan what’s up. She explains that this is for the wax museum and, though wax museums are something I avoid as much as possible as I simply don’t understand the attraction, I want to hang with Yan and her family and they seem to be excited by it. 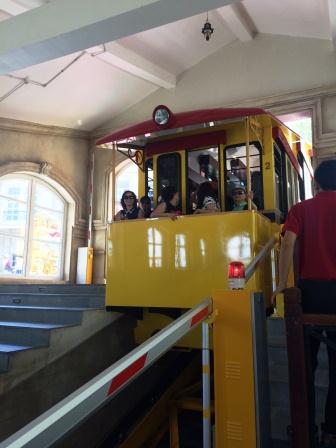 We next head to a funicular (they call it a train) which takes us to the pagoda, where Yen teaches me how to offer incense and say a prayer, and then to the flower garden where Yen’s sisters go crazy with the

camera and we all enjoy the beautiful view. We make a stop at the giant Buddha statue before heading to the winery. There are no vines and no cellars. Just some smaller, fake barrels with fake taps. Some barrels have cut-outs covered with glass with plastic figurines set in tableau’s depicting office, pub and meeting scenes. I really haven’t a clue what this is about. You can buy a glass of wine at the end, but we’re hungry and want to go eat.

We’re led to another cable car which brings us to lunch. It’s the included buffet and I simply follow the family. We’re joined by three other people from the tour and they seem to enjoy getting me to try their traditional food as much as I enjoy spending the day with them. They feed me a dessert which is quite tasty once I get over the comparable to snot appearance.
As we leave lunch and head downstairs, I see dozens of people lying on the floor below. 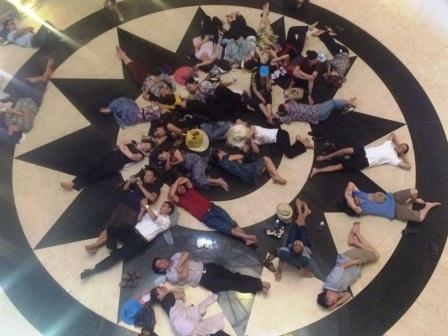 We then head to Fantasy Park, a throwback to 1950’s America theme parks. The rides and attractions are pretty simple with mazes, tiny cars traveling through haunted houses, a dinosaur exhibit with animatronic dinosaurs and cavemen figures, (I take note of the warning to

people with heart conditions as, apparently, this could be so scary that it stops your heart), some cool, 3d, 4D and 5D shows. (In the 5D one we sit on supports as you would a horse while it moves and we shoot guns at Wild West outlaws on the 3D screen.) We have a really fun time on the bumper cars and return to ride them again later

We make our way through the wax museum which, as it turns out, is one of the most fun parts of the day. The figures are really bad, but Yen’s family’s exuberance makes it a great experience. We pose with various figures, with two of the most photographed being Jackie Chan and Barack Obama. 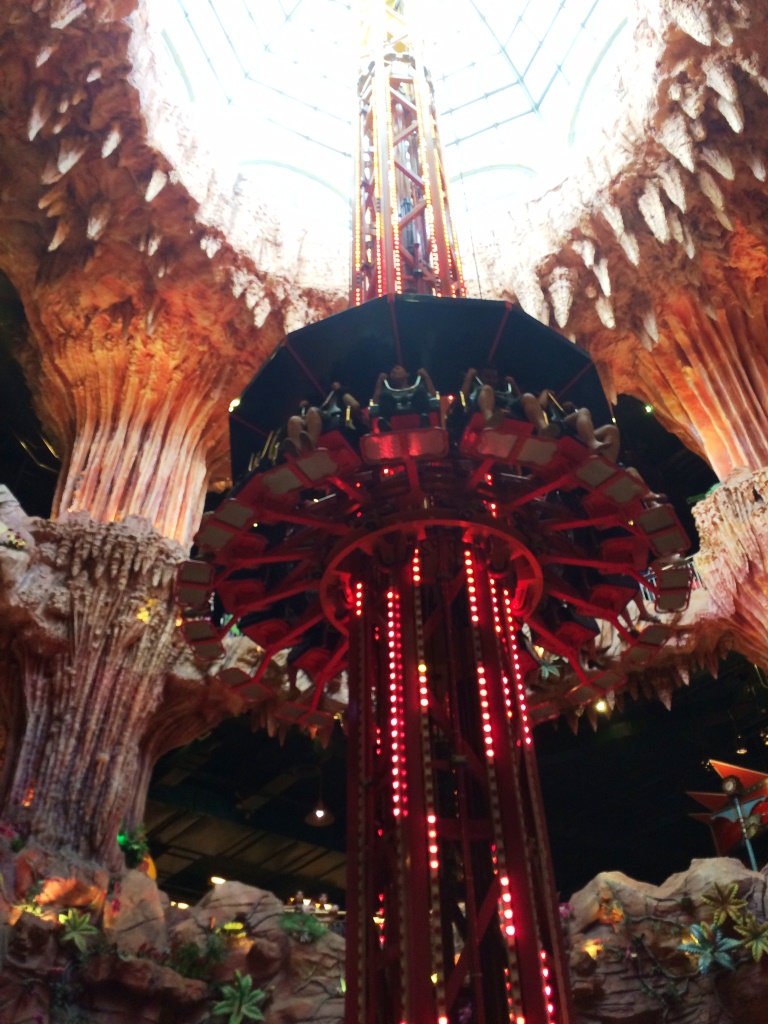 then drops you a few times before heading to the Alpine Coaster. I’ve looked forward to this as I’d seen photos and not ridden anything like it before. Yen’s sister, Hang, and I climb into one, she in the front and me in the back, which means I’m the brakeman. I take note of the signs that the person in the back is liable for all damage or injuries (how comforting), am given precisely four seconds instruction, and we’re sent on our way. There are signs along the way which seem kind of important but, as they’re in Vietnamese, I hope not so much. We make it down in one piece while still gaining some speed along the way. 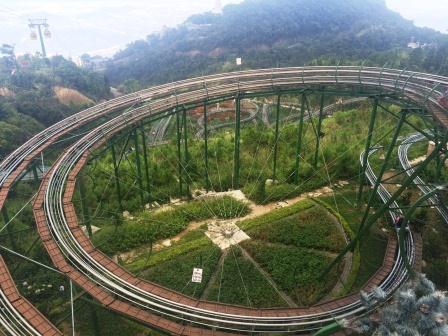 It’s 3:00 when we finish and I ask Yen when we must meet the tour as it’s supposed to arrive back in the city at 4:00. She explains that they met at 2:30 and we’re all going to take a taxi. That’s news to me but, then again, I’ve not understood much of the day and I’ve been adopted by a thirteen year-old interpreter. Though I had some dinner plans, I’m having so much fun with my new family, I’m not bothered.

We continue on playing many video games (lots of gun-shooting and racing games) and race through some rides before we have to leave. After taking the cable car back down, the Vietnamese adults begin haggling with taxi drivers, one of which offers an outrageous price, even to the Vietnamese, and we settle with another driver. On the way back, Yen asks me if I’d like to go to the beach and play with her in the morning.
“Sure, what time?” I ask. Adding, “Not too early.”
“5:30!” she responds excitedly.
“5:30? AM?” I type it into my iPhone to show her to be sure we’re speaking the same language here.
“Yes!” she says, smiling.
“Um, honey, no thanks. It’s just way t early to go play at the beach.”
They drop me at my hotel and I thank them for making this day special when it started out to be nothing close.
** Note that, upon check out, the hotel refunded my money for the tour and I was told that the guide had a bad attitude and said she didn’t want to speak English because everybody else spoke Vietnamese and I was the only one who spoke English. I was told she didn’t like me so she chose not to help.
Tomorrow – I leave Da Nang for a few nights in Hoi An.
Don’t forget to vote for the next location. Vote Here!