After returning to Hanoi from my overnight in Halong Bay, I grab my suitcase and move to the Tu Linh Legend Hotel, which was recommended to me by a couple I met on the airport shuttle in Hoi An. I’ve found the personal recommendations much more reliable than the reviews on the various travel sites, as many of those are written by people paid by the hotel owner. Many of the negative reviews are by their competition. I tend to disregard the first few reviews as well as those which are supposedly written by people from countries where English is the native language, yet incorrect terms or grammar are used. A huge indicator for me is when they say “the staffs were great.” I also judge men by their grammar and could never date someone who doesn’t understand the difference between their, there and they’re.) The price at the Tu Linh Legend is $12 less per night and the staffs (ha!) at the Moon View 2, while nice, speak little English and have no idea what I’m talking about when I asked for directions to “the prison,” a major tourist site. I spend the evening in, relaxing from an early few days. (Heck, all of Vietnam has been early as they generally wake by about 5:30 am and are not quiet people.) In the morning, I head out to find that prison I spoke of. It’s called Hoa Lo and more famously known as the Hanoi Hilton, where many American pilots, including Arizona Senator John McCain were held after being shot down in, what I now know as, the American War (see previous article Happy Birthday in Halong Bay).

I pay my 15,000 Dong entrance fee (about US$0.70) and walk in. Built in 1896 by French colonists, Hoa Lo was a trade village which became a prison to revolutionary soldiers. Most of the bottom floor is dedicated to showing the harsh conditions the Vietnamese revolutionaries lived under. It shows torture devices, rooms filled with mannequins in shackles, and even a guillotine supposedly used to execute those condemned to death. It’s a sad and miserable place and I learn more about Vietnamese history. I head to more rooms where we get into the era of the 1960’s and 70’s. From 5 August, 1963 until 29 March, 1973, Hoa Lo housed captured U.S. pilots. Housed might be the wrong term as this is where they were confined and, often, tortured. The crazy thing here is that this small area dedicated to this part of the history of Hoa Lo is one big lie.

I first see a display of items confiscated from the captured American pilots; there’s Vicks Cough Drops, a toothbrush, cigarettes and other daily items. Also on display are pieces of clothing, including one in a large case which purports to be the flight uniform of John McCain, along with his parachute. Moving through the room I view displays of nice, leather shoes, a leather carry-on bag and a few smaller items which are described as, “items given to American pilots by the 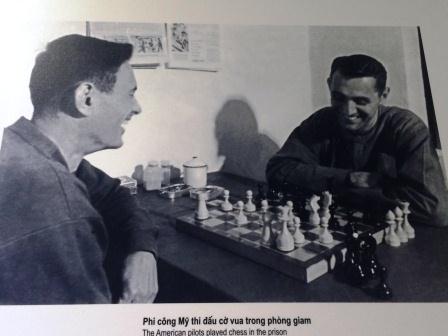 Vietnamese government when they were returned to America.” Also shown are videos and photos of the captured pilots receiving souvenirs to take home to America (aw, parting gifts, how sweet). There are photos and videos of smiling, captured Americans playing pool and chess, with captions explaining how pilots enjoyed wonderful Christmases and excellent food. How amazing that the infamous Hanoi Hilton was really an all-inclusive resort. The only thing left out is the daily massages. I walk through while saying out loud, “Oh my god, oh my god!” While I don’t believe America should have been in Vietnam in the first place, soldiers were tortured and Hoa Lo was infamous for it’s terrible conditions and torture of its captives. This place is a real juxtaposition of my experiences in Germany where museums and historical sites are dedicated to telling the whole, horrible truth. I’ve never experienced a place filled with such propaganda.

I leave Hoa Lo disturbed that these lies are believed by the Vietnamese, as outside information can be somewhat limited due to the communist government. 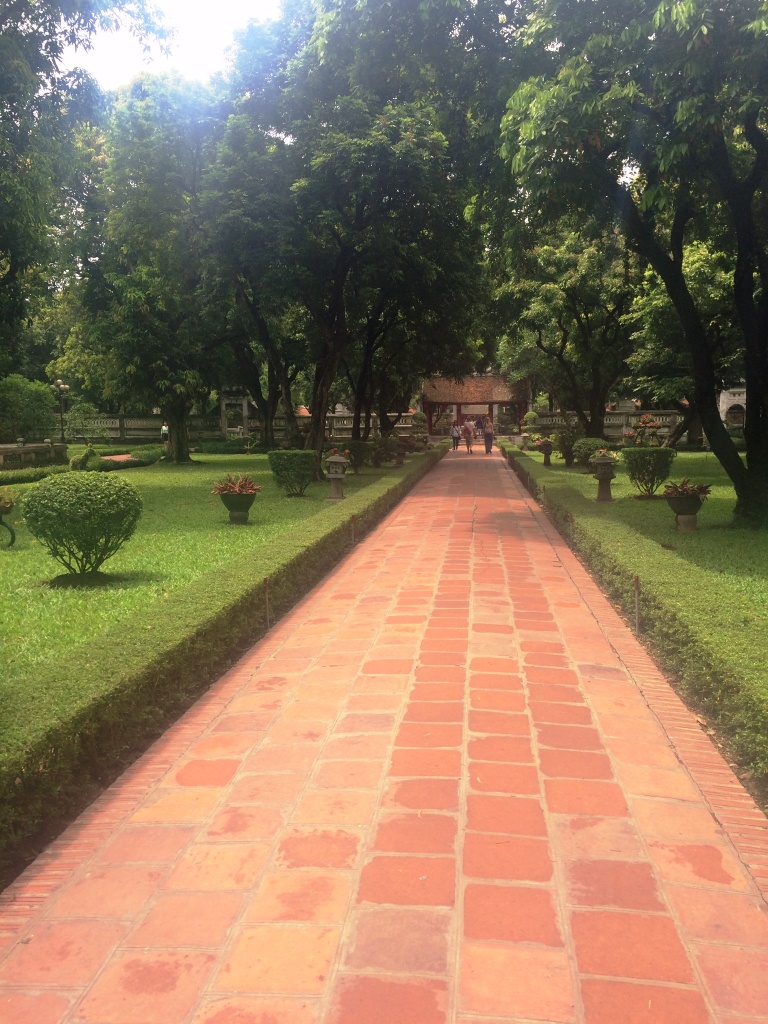 I head next to the Văn Miếu, the Temple of Literature. Built in 1070 and dedicated to Confucius, the temple grounds are divided into five courtyards, with decorative arches separating each, as well as gardens

and statues in between. At the end is the altar-filled Pagoda where people have left offerings (mainly boxes of cheese wafers, which makes it look much like corporate sponsorship). There’s a university inside which was built in 1076 and has produced 1,307 graduates who have passed the set of eighty-two Royal Exams. The sign inside the pagoda explains Confucianism as this: “In brief, a theory on ethical behavior of a gentleman: educating the self, organizing the family, governing the state, and ruling all nations.” I think Confucius might have had something there. 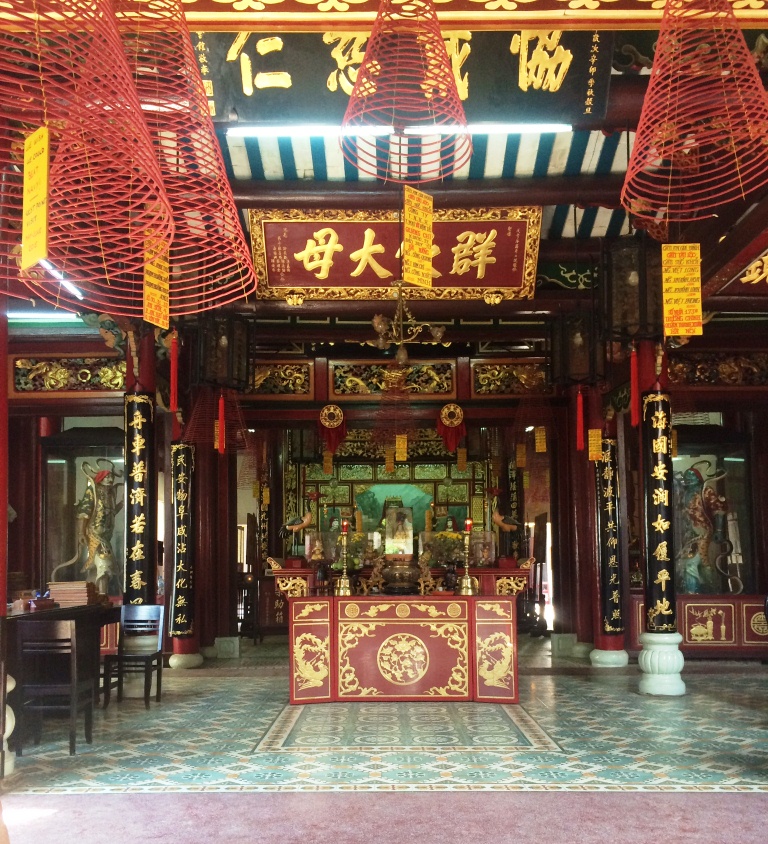 After touring the Pagoda, I wait out front to meet Yen. You might remember that I met thirteen year-old Yen and her family in Da Nang while visiting Ba Na Hills. They adopted me and turned, what could have been a very bad day, into a fabulous one. They were on vacation then but, as they live in Hanoi, we’ve arranged to meet up. 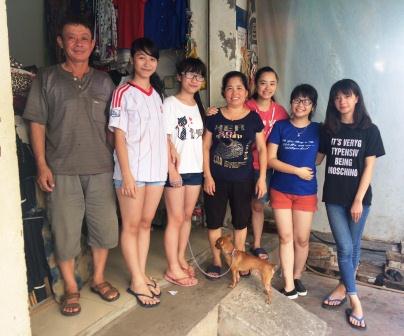 Before long, Yen, her mother, and her four teenage cousins appear. We do introductions and hug and
they invite me to their house. We follow Son, Yen’s mom, to the bus stop where we take the twenty-minute bus-ride to their neighborhood, before walking another ten-minutes to their house. On the way, we stop at Yen’s aunt’s tailor shop as well as her other aunt’s clothing shop. We enter the house on the bottom floor, walk upstairs to the kitchen and up another flight to the patio and sitting room. There’s an altar with incense and photos of Yen’s grandmother, grandfathers and a brother who died at ten years-old. I’m introduced to their cat, Meow, their dog, Bee, some birds and some fish. Oh, and there are the chickens, but they have no names except, Lunch and Dinner. I’m also introduced to Yen’s father. We sit and drink herbal tea while getting to know each other better.
After a while, the teenagers suggest that they show me the marketplace. It’s about a five minute-walk and, like most of the marketplaces I’ve been in Vietnam, it has just about anything you could want, all decorated with designer labels (though, in my experience, many will fall apart within a month). This is really just me and some teenagers going to the mall; some things are universal. 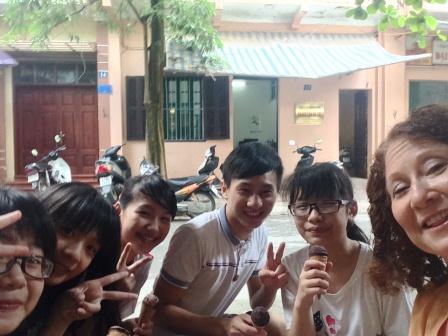 I ask the girls if I can buy them ice cream and, as we walk down the street we’re joined by another cousin (a boy). We find a place which serves prepackaged ice-cream bars from a cooler and take a seat at one of the tiny plastic tables out front. We chat about many things – what they want to do when they get older, their plans for the summer, famous people – and this is where I see great differences from other teenagers I’ve met around the world. When one girl says she wants to be a rap star when she’s older, and she also loves California, mostly because of Hollywood stars, I as if she likes Eminem. She’s never heard of him. I name a few more singers; some, like Taylor Swift and Michael Jackson, they know. Others like U2 and Adele, they’ve never heard of. I play some of the music on my iPhone and we all rock to Taylor Swift and One Direction. I ask the name of some famous people here in Vietnam and the first answer given by all is Ho Chi Minh. Wow. I ask for more and they tell me Vo Nguyen Giap. When I ask who that is they tell me he’s a famous general. Oh, wow. This is not the answer I expected.

None of the teens have ever been out of Vietnam nor do they have a great desire to travel anywhere else, yet they do point out an electrical tower commenting that it looks like the Eiffel Tower in Paris.
Eventually it’s time to say goodbye and they lead me to the bus stop where I board the #2 bus and ask the money-taker guy to let me know when we’re near the Temple of Literature. I step off and begin walking back to my hotel when I decide to stop for a bite of street-food and a beer. As I sit, three men invite me to join them and share their food. We eat, drink beer and chat while the sun sets. They’re impressed with the fact that I’m a woman traveling alone and that I’ll try all of the food they offer. They work for an insurance company for the military. One used to work in a business which meant traveling outside the country for conventions. He’s one of the few Vietnamese I’ve met who has traveled outside of Vietnam, as most don’t have the money and some can’t get visas. (One person in the south told me it’s because America won’t issue visitors visas to Vietnamese. I explained that it wasn’t true and American would issue a visa for a visit, but he wouldn’t believe me.) He tells me that, at some point, he was told he must work for this insurance company.
We talk about the difficulty of Vietnamese getting travel visas and, eventually, he says something in broken English like, “You’re not secret?”
I squint my eyes and ask him to repeat it. He does and I still don’t understand.
“Like CIA. You’re not secret police?” he says. “Because if you are, I’m in trouble.”
“Um, me? No, I’m just a travel writer.”
“Oh, good,” he says.
We continue to drink our beer, chat, and enjoy learning about each other’s cultures. I attempt to pay, and they refuse. Truly an enlightening day. Next up, The Good, the Bad, and the Thank-you’s

Happy Birthday in Halong Bay The Good, the Bad and the Cam Ons – Vietnam