It’s here, the end of our Vietnam adventure; and an adventure it’s been. I’d say that, next to India, this has been the most challenging location. Sure, the language barrier was a big part of it. While the younger generation of Vietnamese learns English in school, they have little opportunity to use it as it can be difficult to obtain a travel visa to visit other places and, even if you can, money is a problem. As far as the visas go, someone mentioned to me that they’d like to visit America but American won’t issue a visa to visit. Without much research, I told him that this was untrue. America welcomes tourists from other countries (living there is a different story). I believe it’s the Vietnamese government who makes obtaining a travel visa difficult.

Vietnam was the first actively Communist country I’ve traveled to, and I definitely noticed it. Besides the Vietnamese teenagers telling me their famous people were a now deceased dictator and a general, also dead. (Read Communism and the Common People.) I received various comments from others whom I won’t name as to protect their identities as it became clear to me that certain things they said could get them in trouble. In fact, I’ve waited to tell you about some of these because criticizing the government is against the law. Bloggers and writers have been arrested in Vietnam for such things and, while I was there, a few people told me I was most likely being watched. The various comments included:
“If you lose your job here, you will die.” This was said very clearly by someone being sure to look at me directly in the eye. When I asked who the wealthy people in Vietnam are, “Doctors? Lawyers?”
The response was, “The government.”
I had a long talk with an expat couple I met on the beach. We talked about many things. I later received an E-mail from them asking me not to identify them, where they’re originally from, or what they do for a living as “it could cause problems for our job.”
When discussing my trip to the War Monuments Museum, I mentioned that it was now clear to me that America never should have been in Vietnam. The response I received surprised me.
“Some of us wish America would come back.”
“What?” I asked. “Why?”
“Because of our government.”
“You don’t like them?”
“No. We wish for America to come back.”
I explained that it would not happen and, if enough Vietnamese felt that way, they must try to make changes from inside.
Twitter was blocked for much of the time I was there and, in the north, as it’s been under communist rule for much longer than the south, more internet seems to be blocked and the people seem much more isolated from the world outside of Vietnam.
So, you can count censorship and lack of freedom of speech as one of The Bads of this country. Below is my list of the rest of the Goods, the Bads and the Thank-yous.
The Good 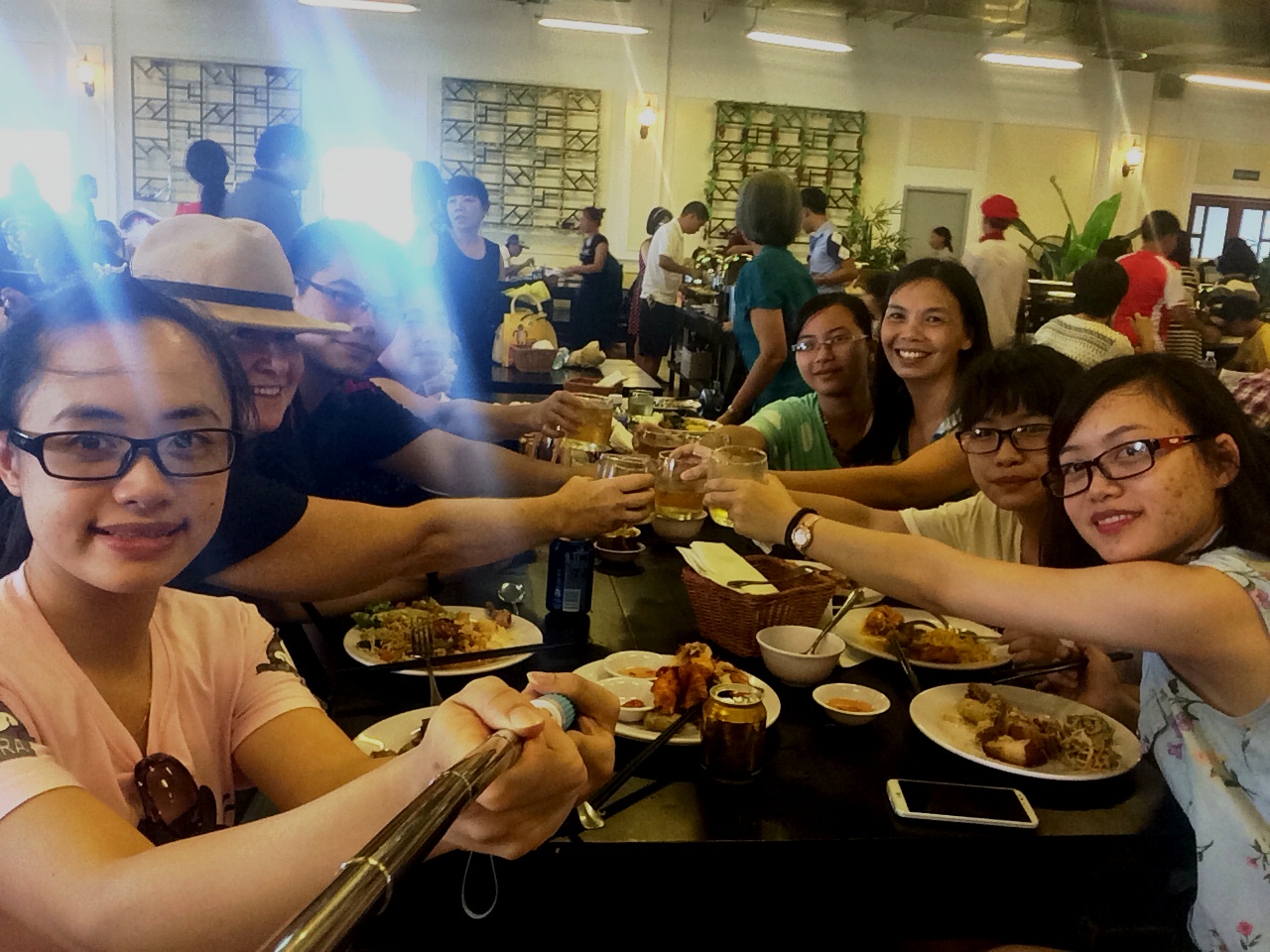 The people – With a few exceptions, the people of Vietnam are gracious and friendly. They don’t even know you yet they invite you to their house for tea, or for a picnic on the beach with their friends, or to adopt their daughter (I think they were joking but I totally wanted to). Sometimes people do nice things just to be friendly and in hopes that you’ll enjoy their country, for others, there’s often a trade-off. I got to know and understand the game. You’ll stop on the street to look at your map; sometimes you’ll be stuck and nobody will offer to help, and sometimes someone will approach and offer to assist. They’ll point you in the right direction and then make small-talk – “Where are you from? Do you have kids?” They’ll then tell you that they’re a tailor and ask for you to come see their shop. Once I understood the game, I became a player when, at the train station, I stopped a lady to tell her that her backpack was open and I helped to close it. She thanked me and I then asked if she could help me read my ticket and find my train. Just playing the game.
The Bad
The taxi drivers – I can say from both personal experience as well as here-say that most Vietnamese taxi drivers will try to cheat you. It’s not simply because you’re a tourist (though the probability of being cheated goes way up for you), it’s simply that they can get away with it. The worst that will happen is you’ll catch on and they won’t win. They will not be fined, fired or arrested. We’ll also include the various hotels, tour guides and companies, and the Irishman who cheated me. I can do little else but feel sorry for you as dealing with an angry redhead certainly takes more energy than simply telling the truth and taking pride in your work. Oh, and lastly, the prejudice of many people. If there’s one thing I’ve learned from Asia, prejudice is not simply an America issue. I have white skin and therefore, must be rich and therefore, will never get a price as low as someone with darker skin and will often be cheated. It’s how it is in Vietnam, as well as India and Indonesia (also, to some extent in Malaysia).
The Good 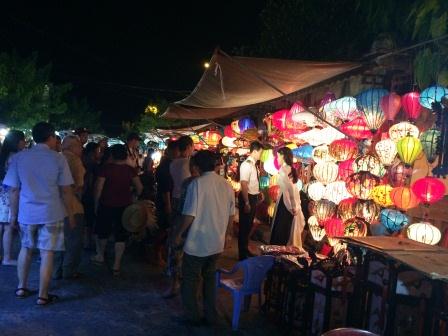 Hoi An – Should you find yourself visiting Vietnam, you must stop by Hoi An. Yes, it’s a bit touristy, but this ancient city feels a bit magical. It could easily be the setting for a Disney animated movie, so go there and pretend you’re the prince saving the ancient town (and maybe a princess) from a villain. With the beautiful lanterns and candles to launch down the river while making wishes, anything could happen. Oh, and while you’re there, get a custom-made suit, or coat, or shoes. And buy that princess a custom-made gown. Who needs a fairy god-mother when you have a Hoi An tailor.
The Bad
Ho Chi Minh City (Saigon)- ten million people, few of whom are very friendly. Air pollution, traffic, noise – it’s just not my kind of place. Do yourself a favor, if you feel you must go to HCMC, don’t stay for a week like I did. Say Goodnight Saigon after three or four days. While you’re there, you might want to check out a cruise on the Mekong Delta. And do the overnight one as that’s the only way you’ll see the famous Floating Market in action if you start in HCMC.
The Good
The trains – I sat for 17 hours in a four-berth sleeper car. It was really quite comfortable. Not quite like European train, but somewhat like an old Eastern European train I once took from Berlin to Krakow.
The Bad
The bathrooms – While they tend to be pretty bad in most places, the one on the train I was on was especially bad. Do yourself a favor, if you take a train, limit your water intake. Dehydration can be pretty awesome compared to having to use the facilities.
The Good
I learned how to use chopsticks correctly – place between the middle and ring finger.
The Bad
Just because I know how to use them correctly, doesn’t mean I’m very good at it.
The Good

Volunteer Vietnam, the organization I volunteered with in Da Nang. They do amazing work and I hope you’ll read my story about them here.
The Bad
The fact that Volunteer Vietnam even needs to exist. Agent Orange, abandonment of the elderly and disabled, and lack of resources. But thank goodness for people like Viet, the director of Volunteer Vietnam and his staff and volunteers.
The Thank-you‘s
Thanks to Jessica in Kuala Lumpur – for holding onto one of my bags as sweaters were not needed in Vietnam and it made travel throughout the country so much easier.

Thanks to my friend Yen and her family – you truly represent the friendly Vietnamese people. I wish everyone in Vietnam was like you. You made me part of your family, brought me into your home, and showed such kindness. If you are ever able to travel outside the country, I hope that you’ll visit, and stay with me. My door is always open.
Thank you Ngoc – While your AirBnB, The Penguin Friendly House, couldn’t accommodate me (link to Penguin AirBnB), you took me for a picnic, introduced me to your daughter and your friends, and welcomed me to Da Nang. Next time I hope to stay with you (and I’ll bring my penguin!)

Thanks to Kim, King and King’s dad (darn, I can never remember your name sir) – He owns the wonderful Blueclouds Homestay, Kim runs the desk, reservations and so much more, and King shared his expertise on coffee roasting and coffee-making at his soon to be opened coffee shop, The Espresso Station
Thanks to the three men I shared dinner and drinks with on my final night. You shared your food, your culture, and your views on the world and your country with me. It was a special moment for me and one travel memory which I will always cherish (and no, I’m not secret police).
Thanks to Viet at Volunteer Vietnam – you are doing such important work and taking on so much. I think of you as the Mother Teresa of Vietnam. The true measure of hero is someone who sacrifices so much to help those who can never return the favor. You are my hero.

Thanks to the travelers I met along the way – Lara, Shohan, Eoin, the people I had dinner with in Hoi An, Khánh and his family from the Ba Na Hills trip, and so many others who I enjoyed spending time with and sharing views on Vietnam and the world.
Finally, thank you to you, my Virtual Travel Buddies, without whom none of this would be possible. Well, it would be possible but not nearly as fun. It would just be me, traveling and talking to myself. Okay, I do that too, but still, I appreciate that you read, encourage and learn along with me. This project has been a leap of faith and you help me keep the faith daily.
The Budget
Should you ever decide to do a similar twenty-day trip, here’s the breakdown of my costs so you can have an idea of a budget:
Airfare and Train – $450 (Round-trip air from Kuala Lumpur including some changes, one-way air from Da Nang to Hanoi, and train from Saigon to Da Nang).
Accommodations – $504
Food – $270
Taxi’s, Buses, Bike Rental, Motorbike rental, etc. $49
Admissions and activities – $264 (includes the hotel for overnight Mekong Delta cruise and night on boat for overnight Halong Bay cruise)
Total cost – Approximately $1,537 (twenty days)

Communism and the Common People My Man Friday